To most people, Nicklas Bendtner is a meme. A footballer whose exploits made more headlines on the front page than the back. A player who became notorious for his extravagance off the field. The most un-Danish of Danes.

But Bendtner is as much a myth as he is a meme. The numbers don’t line up with the narrative. He is Denmark’s fifth-highest goalscorer of all time, scoring at the World Cup and twice in the Euros.

He bagged a respectable 46 goals for Arsenal, averaging a strike rate of one in every 169 minutes he played for the Gunners in the Premier League. And of course, there’s that goal against Tottenham, for which he still holds the Guinness World Record for the quickest goal scored by a substitute.

Dig a little deeper into his career and Bendtner’s story is marked by self-sabotage and debauchery as much as by the absence of someone to tell him otherwise. It’s a career trajectory that went wayward from the start.

“When I was 18, without any notice I was sent off on loan to Birmingham,” Bendtner recalls. “I came from living a very different life in a small room at a host family with almost no pocket money at all. And suddenly I lived in a penthouse, had loads to spend, went out with my much older teammates all the time and sometimes some of the guys even crashed my place with their dates.”

Looking back on his St Andrews days, Bendtner remembers Birmingham as a city “full of temptations” for someone as curious as him.

“On the pitch, I got a lot of valuable experience in Birmingham, but outside I was suddenly on a different path compared to what I was used to in Arsenal,” he says. “Some guidance from somebody I knew and respected could probably have made a difference.”

But in the early stages of his career, the distractions off the field didn’t make their presence felt in his game. He began getting more first-team opportunities after returning to Arsenal and the record-breaking goal against Spurs that year sped up his ascent. By the time the 09/10 season rolled around, he was an important part of Wenger’s plans.

“The autumn of 2009 started with a lot of promise, a lot of light and success, but the year ended very dark and ever since my career was a bit of a rollercoaster ride,” he adds.

The darkness Bendtner talks about can be traced back to one specific incident in September that year. On his way to training, Bendtner was involved in a horrific car accident in which his car rolled down a bank before smashing against a tree. He was lucky to have survived.

The crash had long-term physical implications Bendtner says he “never quite recovered from” and then injured his groin soon afterwards, ruling him out for four months. Despite making a comeback and finishing the season strongly with a tally of nine goals in all competitions, the problems with his groin persisted.

Bendtner considers the accident in 2009 a sliding doors moment in his career. When asked which decision in his life he’d overturn if he could go back in time, his answer is obvious – “Not to crash my car”.

Just as Wenger predicted, Bendtner returned from South Africa with his groin in a worse condition than it was before. The arrival of Marouanne Chamakh also saw him slip further down the Arsenal pecking order and he soon replaced the adrenaline rush first-team football gave him visits to nightclubs and casinos.

In a remarkable chapter in his autobiography, Both Sides, the Dane speaks about how he gambled away £400,000 in one night and was on the brink of bankruptcy.

After a season spent as a bit-part player, Bendtner was offloaded to Sunderland on loan. The move effectively spelled the end of his Arsenal career and he was loaned to Juventus the following year before eventually being released in 2014.

While there’s obvious regret about things not working out at Arsenal, there’s a sense it’s also tinged by the disappointment of never being understood.

“Wenger was not and should not be my babysitter,” the 32-year-old says. “He had too many others to look after and of course I wasn’t his biggest priority.

“It was easier for my national team coach, Morten Olsen, to put me first when it was needed and show a personal interest in what was going on in my life. I guess that also paid off, if you look at my goals scored for Denmark.”

Rune Skyum-Nielsen, the ghost writer of Bendtner’s autobiography, believes it was all a matter of trust.

“Maybe he [Bendtner] needed trust and maybe more trust than many others,” the author says.

“There was no time for that at Arsenal, but he’s aware he should have been coping differently with having to start on the bench. He should have trained harder instead of going out and seeking approval in nightclubs instead.” 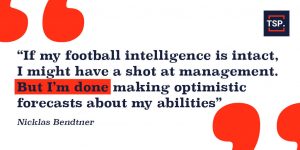 As his playing career spiralled, Bendtner lost control over the narrative around him too. He became a subject of derision and was one of the early victims of internet trolling. Somewhere along the way the Lord Bendtner moniker, a title that’s now ubiquitous with him, was attached.

“I’ve taken it [being called Lord] to heart,” Bendtner explains. “It’s a long time since I realised some people will never stop calling me that, no matter what. And even though not everybody means well, it has become something fun and positive as well to a lot of people. I choose to embrace it. I am the lord. If you can’t beat them, join them, you know.”

After being released by Arsenal, Bendtner had a nomadic existence with spells at Wolfsburg, Nottingham Forest, Rosenborg and Copenhagen. Last December, he began pursuing his coaching badges with UEFA.

The Dane feels his experiences as a player will help him in guiding players away from the pitfalls of a footballer’s lifestyle. But if the idea of Nicklas Bendtner as a manager does seem a little far-fetched, even he’s under false illusions about his capabilities.

“I truly believe in treating people as individuals, I know from myself and other players that it is sometimes the only way to do it. Not everybody needs the same push, the same rules and the same freedom,” he adds.

“If my footballing intelligence is still intact, I might have a fair shot at it. But let’s see. I’m done making optimistic forecasts about my abilities.”

There’s a level of humility and self-awareness about Bendtner today. If only they had been present a decade ago to complement his prodigious talent.

His career has become as much a cautionary tale as much as it is one of football’s biggest what-ifs. Rune-Nielsen surmised it best. “He’s been unlucky, but he’s been seeking bad luck.”

It’s a line almost good enough to make into a meme.