It was on 13 November 2013 when Matt Crossen’s life turned upside down. As a 23-year-old semi professional footballer, he had high hopes, but three weeks after suffering a nose injury in a Northern League Division One match for Marske United, he had a stroke he never fully recovered from. His left-hand side was permanently paralysed and he’s lived with cerebral palsy ever since.

Long-term effects of accidents such as this resulting in a disability from brain damage is not uncommon. Many people are born with cerebral palsy, too. But the desire to maintain a football dream is very much the opposite.

Not only did he realign his sights on playing for and eventually captaining the England cerebral palsy team, he made sure he wasn’t forced to give up playing in the Northern League, either.

Despite Crossen’s disability, he splits his time on the pitch playing 11-a-side in non-league and leading his country on the big stage. When he wears the white of England, there are seven players on each team with smaller goals. 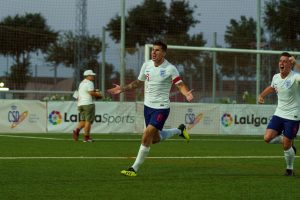 “I was loving my football, I’d played every game for Marske that season,” Crossen tells the Set Pieces, a day before the seven-year anniversary of his stroke, which he struggles to remember in great detail.

“I spent six days in hospital, learning to walk, talk, write, brush my teeth, brush my hair. I had to do it all from scratch, programming my brain back to how it was. That was the toughest part of going through it all.

“My focus was getting back playing – I didn’t know anything about the England CP set up initially. I worked in a gym at the time and I’d been off for three months, doing little training drills at home. Then when I got back to the gym, I took advantage of working there, doing spin class after spin class, which rebuilt the strength in my legs. I knew that if my legs were strong enough, they would carry me and from there I could start to play football again.”

While Crossen had a clear vision of his own recovery, one thing he couldn’t control was other people’s reaction to his new reality. After building himself back up in the gym, he was soon back on the training pitch – albeit with an element of caution around him.

“I got back to training with Marske and they were worried I would have another stroke,” Crossen adds. “I’d been signed off by the doctors and it was a freak accident. I’ve never been able to find out what happened. I had to nose glued back together, they think it could have sent a cut-off to the back of my brain.

“There’s part of me from before my stroke that is gone, I know I’ll never get it back. I was getting the ball down, there was a comfort in myself and my game. It is still there, but not as much as before. That comes with the fact that I can’t feel my arm and my leg. When I’m running and holding people off sometimes, I can’t feel where my arm is. I’ve got take extra looks around to see where I am and that can take my eye off the ball, but I slip into England mode and I slip into Northern League mode, it doesn’t really bother me.

“There is a lot more running for England. In the Northern League, I play either right-back or centre-back and for England I’m more of a holding midfielder. I like to keep things moving and let the lads who are a little bit more skilful work their magic.” 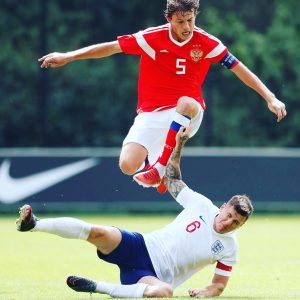 Tentative enquiries from the FA’s National Football Development Manager, Jeff Davis, in the form of a voicemail message on the Marske’s chairman’s phone opened Crossen up to a world of new possibilities just two years later.

With England, he started training at the national headquarters at St George’s Park and playing in major tournaments in capacity stadiums across the world. The Covid-19 pandemic has caused havoc with their schedule over the past year, but he remains confident of a bright future.

“The lure of England calling got me involved,” the 30-year-old continues. “I still play Northern League football week in, week out and I’m currently at Crook. Marske got promoted and with the travelling, I thought it best to stay at that level. I have a full-time training plan with England, we’ve got to train six hours a week minimum, though I’m not training at the moment because I damaged ligaments in my knee and I’m just coming back to full fitness.

“Our home pitch is at St George’s Park, we train there and we have heart monitors we check in with when we’re not at camps. I’m contracted to England, so that comes with a lot of perks like going to the games and generally being involved in the set up.”

Crossen impressed Davis and England manager Andy Smith sufficiently to be given the captaincy when it became available. But despite becoming part of the furniture in the CP set up, Smith popped the question in a rather more surprising environment.

“We were going over to Holland for a training camp and about to play them in a friendly. I had a meeting with Jeff and the gaffer after breakfast one day and they just said, ‘look, we want you to be the captain going forward’,” Crossen recalls.

“There was nothing special, just a quick discussion and I’ve never looked back. I’ve still got a lot of time left in me. I’m still contracted to England for a while yet and I want to fulfil that.”

Media interest in the England team is growing even today and Crossen is surprised by the sport’s development. As captain, he is very much at the forefront of that, getting involved with brands such as Nike and Sports Direct and mixing with the likes of Tottenham superstar Harry Kane. 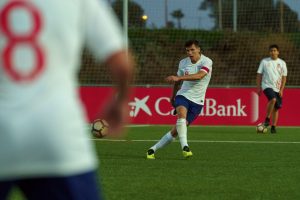 “The exposure of the cerebral palsy team has come on leaps and bounds, it is huge,” Crossen picks up. “It has turned a corner and as soon as lockdown is over and we get this virus out of the way, I think it is going to kick off massively.

“Footballers, celebrities and people like that are starting to notice it ,and people are interested in the sport. I’ve seen it from when I made my debut back in 2015. It shocked me in Holland in 2018 [at the CP Football European Championships], just how much coverage we were getting. There were no seats in the stands, but people were packed around the pitch. At the 2016 Paralympics in Rio, ours was the second most watched sport. The stadium was packed and someone told me it was 20,000-capacity.

“I was fortunate enough to be the new lead athlete for the new Velcro boot, recently brought out by Nike. It was adapted from a girl who had difficulty getting her shoes on for basketball in America and that’s given the confidence and freedom to players who have maybe been sat in a dressing room before a game looking at people and thinking ‘they can tie their shoe laces’ to do these things without needing help.

“[The England team senior team] was always set away from the rest of us, a different level, whereas now, you’re all England and you’re all as one. You feel part of it, no matter what. We’re one of the elite male senior sides. I’ve been lucky enough to meet Harry Kane and to hear him in conversation, mentioning my name and looking to me as though as I’m on his level, like we’re all captains. You don’t represent England with levels above you, we’re all representing England. It is a big family.”

The future is looking bright for Crossen and the England CP team heading further into 2021, with a number of matches and tournaments cancelled last year – including the Paralympics in Tokyo –because of COVID-19. But he still wants to see more to improve the understanding of cerebral palsy, disability in general and the sport.

“We’ve got the Top Eight tournament in Sardinia at the back end of next year, which was cancelled because of the pandemic,” he adds.

“Hopefully we can start putting that behind us soon and then there are the Euros, with the venue to be decided soon, in 2022.

“Disability just needs more exposure, more matches being broadcast. You see what is happening with the Lionesses [England women’s team] now and I know the FA are really trying to get behind it. It’s becoming more mainstream.”