Hristo Stoichkov has never lacked confidence. “There are only two Christs,” he said upon collecting the Ballon d’Or in 1994. “One plays for Barcelona, the other is in heaven.”

In fairness to the Bulgarian, he had the brilliance to back up the bravado. Stoichkov was one of the most talented players of his generation, averaging a goal every other game during his first spell at Barcelona between 1990 and 1995, and starring at the 1994 World Cup. But he was also one of the most temperamental.

At the age of 19, Stoichkov received a lifetime ban from the Central Committee of the Bulgarian Communist Party for his part in an on-field brawl between CSKA Sofia and Levski Sofia. The suspension was reduced on appeal, but it’s fair to say he didn’t learn his lesson. Later lowlights included him stamping on a referee, being sent off for two yellow cards in the first six minutes of a game, and, aged 37, breaking the leg of an 18-year-old with a challenge labelled “criminal” by the opposition’s manager.

“Stoichkov is a predator,” former Real Madrid boss Jorge Valdano once said. “[He’s] a beast who’s only satiated by the flesh of his victims.”

Despite serious doubts over whether he had the right disposition for the role, it was perhaps inevitable that Bulgaria’s greatest-ever player would one day take charge of the national team. Celta Vigo had no such excuse – which makes their decision in 2007 to appoint Stoichkov, a man with a chip on both shoulders, all the more bemusing.

The evidence from his three years at Bulgaria’s helm didn’t offer much in the way of encouragement. During the unsuccessful qualification campaign for the 2006 World Cup, two key players quit the team after falling out with Stoichkov. They were soon followed by the captain Stiliyan Petrov, who declared he wouldn’t represent his nation for as long as Stoichkov was calling the shots.

“It’s very hard for me because I love playing for my country but I need to make my decision because I think some things aren’t going on the right way and I don’t want to be part of it,” the then-Aston Villa man explained.

The premature retirement of three important players would have prompted a period of introspection among most coaches. Not for Stoichkov. The former forward remained as confrontational as ever – he once threw a seven-year-old boy out of an open training session for wearing a Real Madrid shirt – before resigning a few weeks after a goalless draw with Albania in March 2007.

Stoichkov wasn’t about to walk away from management, though. He’d been negotiating with Celta Vigo and was unveiled as their new head coach immediately after vacating the Bulgaria hot seat.

He lasted in the position for six months, but Celta officials must have had their doubts from his very first press conference. The club would have already known Stoichkov was a hot-head who struggled with the man-management side of things, but they must have hoped he would at least bring strategic acumen gleaned from his time working under the likes of Johan Cruyff, Louis van Gaal and Nevio Scala as a player. 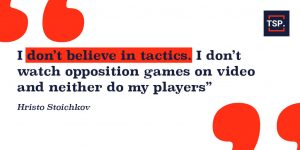 “I don’t believe in tactics,” he told dumbfounded members of the media at his unveiling. His employment of a 2-4-4 formation during a friendly with Malta had demonstrated there was indeed madness in his method, but few were expecting Stoichkov to be so forthcoming. He was also happy to inform those present that Celta wouldn’t be bothering themselves with anything as dull as scouting or video analysis.

“I don’t watch opposition games on video and neither do my players,” Stoichkov huffed, adding the first nail to his coffin before he’d even started work.

In the Bulgarian’s defence, Celta didn’t have one. They had kept only one clean sheet since November and lost their previous game 4-2 to Recreativo, which had itself been preceded by defeats to Sevilla and Werder Bremen.

The latter loss confirmed Celta’s elimination from the continental competition, so the task confronting Stoichkov was clear. Sixth-place finishers the previous season, Celta now had nine games to preserve their top-flight status.

Stoichkov got off to a winning start, with Fernando Baiano’s strike enough to secure victory over rivals Deportivo La Coruna. That result moved Celta out of the bottom three and just six points short of lower mid-table. All of a sudden, a path to survival had opened up.

Stoichkov chose a different route. Celta failed to score in their next three matches, all ending in defeat, and the manager was never shy in letting his squad know what he thought of their performance. They did at least find the net against Levante and Real Sociedad, but two more defeats left them four points adrift of 17th with three games remaining. The Sky Blues looked to the heavens and pleaded for a miracle.

They very nearly got one. Celta took maximum points from the final three matches, beating Real Betis, Atletico Madrid and Getafe to the astonishment of their supporters. Yet that still wasn’t enough to haul them clear of danger; Athletic Club won two of their last three fixtures to survive by the final layer of the skin of their teeth.

That end-of-season flourish suggested Stoichkov was starting to get his tactic-less ideas across and Celta were duly among the favourites for promotion the following year. Stoichkov was given a say in shaping the squad for the season ahead and several key players from the previous campaign were retained.

But things didn’t go to plan. A disappointing start left Celta in 11th place after seven games, closer to the relegation zone than the top two in terms of points. Stoichkov was sacked on 8 October.

The Bulgarian went on to have spells in charge of Mamelodi Sundowns, Litex Lovech and CSKA Sofia, but he hasn’t been spotted in a dugout since 2013. Which is probably just as well. After all, Christ has a lot of other work on his hands.