It was the spring of 2004 and Raith Rovers were in dire need of investment. The 121-year-old Scottish side had narrowly avoided relegation to the third tier and an ownership group fronted by Colin McGowan wanted to share the financial burden.

The glory days of the previous decade – a Scottish League Cup triumph and UEFA Cup qualification – were long over for Raith. McGowan and his partners had saved the club from potential bankruptcy in 1999, but like many of their domestic rivals, Rovers were living hand to mouth and remained in a perilous financial situation. They were leasing their ground, Stark’s Park, from a property company they’d sold it and desperately required an additional backer to help keep the club afloat.

Claude Anelka spied an opportunity. The older brother of Nicolas, a France international who was then plying his trade with Manchester City following spells with PSG, Arsenal, Real Madrid and Liverpool, Anelka was determined to remain in the game following his own 11-year playing career in France’s lower leagues. He had worked as his sibling’s agent since the late 1990s, but that wasn’t sufficient to satiate his hunger for frontline involvement.

When he heard a Scottish First Division side were looking for investment, Anelka put himself forward as the man to provide it. Best of all, his generous cash injection came with just one condition: in return for £300,000, all Raith would have to do is appoint Anelka, a part-time DJ who had no coaching experience and had never stepped foot in Scotland, as director of football and manager.

Rovers weren’t the only side to receive such a generous offer. Desperate to get into management but less keen to work his way up the pyramid through hard graft and elbow grease, Anelka had made it known he would happily contribute £300,000 to the accounts of any club that agreed to install him in the dugout.

Not that he emphasised this point after finally finding a willing party in Raith, who agreed to a deal that had been rejected by QPR and Barnet. To listen to Anelka at his unveiling was to imagine the homecoming of a boyhood Raith supporter who’d spent his childhood on the Stark’s Park terraces.

Asked about his objectives for a side that had ended the 2003/04 season with a 1-0 defeat by Ayr United, Anelka – cards a mile from his chest – vowed to turn Rovers into Scottish football’s “third force” by making use of a contacts book the like of which Scotland’s First Division had never seen. In the eyes of Raith’s new manager, Celtic and Rangers’ historic duopoly was soon to be a thing of the past.

“My aim is to get promoted as soon as possible,” he told The Independent. “I don’t know when. As soon as we go up, start to build a youth academy, develop a youth team because we can’t compete against Celtic and Rangers [in the transfer market].

“The only way to compete [with them] is to have a good chief scout to try to pick up good players around the world and to develop our own academy. When the players are good enough, they are to play and after that we sell them.”

It was the type of message designed to thrill supporters and get them on board for the journey ahead, but Raith’s followers were more unsettled than exhilarated and duly took Anelka’s intemperate announcements with a fistful of salt. The fan base of a modest club from the east coast of Scotland isn’t the most natural audience for talk of top-tier trophies and national domination. 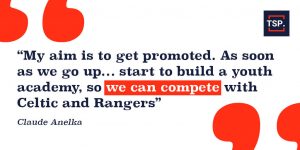 The apprehension was underlined by whispers that the experimental endeavour was entirely of McGowan’s making, with fellow directors Turnbull Hutton, Eric Drysdale and Mario Caira having supposedly refused to sign Anelka’s contract. The fact former manager Antonio Calderon had jumped ship after turning down a demotion to a coaching role didn’t exactly fill the Stark’s Park regulars with confidence either.

Anelka promptly set about transforming the Raith squad, but anyone hoping his brother’s connections would see a host of French youth internationals pitch up in Kirkcaldy were left disappointed. There were indeed multiple arrivals from across the Channel, but most – including Hamed Sacko, Amar Benaissa and Rudy Pounosaamy – were unproven amateurs brought in from France’s regional leagues. It was certainly a novel approach from a man who had previously declared himself “fed up to see managers do so many crazy things”.

Anelka wasn’t a one-trick pony, though. He also sourced substandard signings from elsewhere, including the hapless centre-back Jack Perry on loan from QPR, Tomas Hajovsky from the Slovakian second division and Ivory Coast-born midfielder Baroan Tagro, most recently of Carshalton Athletic. With six first-teamers released almost as soon as Anelka took the reins, Raith’s squad was virtually unrecognisable at the start of the 2004/05 campaign.

Given their pre-season had apparently begun with a game of 14-a-side on the local park, it was no surprise that Rovers hit the ground trudging. Anelka cited Johan Cruyff, Arsene Wenger and the legendary former Nantes manager Jean-Claude Suaudeau as the inspirations behind his philosophy, but introducing his own brand of Total Football to the Scottish First Division proved rather difficult.

Raith began the season by suffering elimination from two domestic cup competitions at the hands of lower-league opposition, either side of a 2-0 loss to Hamilton Academical in the First Division. They turned in an improved display in a 3-2 home defeat by Clyde and then finally got off the mark courtesy of a 1-1 draw with Airdrie United, but that proved to be the falsest of dawns. Rovers lost each of their next four matches, their attitude not so much never-say-die as at-least-make-it-quick.

Anelka’s tenure had already become untenable. The summer recruitment had been an unmitigated disaster and the inexperienced coach proved incapable of moulding the squad’s disparate parts into anything resembling a coherent team. Hutton had resigned the chairmanship in protest, while two assistant managers, Dave Martin and John Hollins, had departed for fear of their reputations being tarnished. The supporters, meanwhile, were growing increasingly restless, particularly after a 3-0 loss to St Mirren which featured the sort of defending that would have left the Keystone Cops shaking their heads in embarrassment.

A 2-1 reverse against Queen of the South at the end of September was the last straw. With Raith rooted to the foot of the table, Anelka bowed to the pressure and stepped down as manager having overseen nine defeats in his 10 games at the helm.

The bizarre episode wasn’t over just yet, though. Anelka insisted on staying on as director of football, adamant he could still help the club, albeit in a different role. But results still didn’t pick up and Anelka finally fell on his sword in October, with relegation already a near-certainty after three months.

“Right at the start I knew things were going wrong,” the Frenchman conceded. “I quickly realised that there was more to the game in Scotland than I thought and I also knew my knowledge of the game was not enough to fulfil my overoptimistic plans.

“I signed players that I thought were of better quality than the others I already had at the club, but I was wrong. It has been very hard to listen to the abuse and jeering of the fans but it is understandable. I’m the first person to realise they love their club with a passion.”

It was, in fairness, a frank admission of Anelka’s own shortcomings, but the damage had already been done. Hutton, who returned to the club two seasons later, felt the affair set Rovers back at least four years, which is the time it took them to climb back into the First Division. The club have enjoyed better times since then, notably winning the 2014 Scottish Challenge Cup with victory over Rangers in the final.

Anelka, for his part, currently works as a coach for the PSG academy in Miami, having previously spent six months in charge of AC St. Louis in the North American Soccer League. He’s not been back to Kirkcaldy since.