Magnus Hedman feels like a completely different person to the one he was three years ago. Back then he was overwhelmed by a cocaine addiction and had relapsed after a long period of self-enforced sobriety. Going it alone hadn’t worked and the underlying factors that fed his addiction went unaddressed. He needed help and simply admitting that was hard enough.

“It’s a difficult thing, as an adult, to ask for help. To admit that you’re so powerless. To admit that you can’t handle your life. That you have to do something else, but you don’t know what. Because you’re trying all the different solutions you can come up with but none of it works.”

Hedman believes that, in some senses, his path to addiction started in childhood. He had a difficult home life and a lack of self-esteem that never truly went away. He initially looked to fill this void by playing football – developing a sense of purpose and earning praise for his performances. It was a means of escape that soon became his driving force.

“It was a dream from childhood to become a professional footballer. They were broadcasting one English game per week on TV, which was on a Saturday. I saw that and got attached to it in some way. All of a sudden, my dream was to play in England,” he recalls.

“I was on my own quite a lot as a kid. My mom was quite ill, so I kind of created a motivation for myself. A place where I felt safe and that was in sports. I was doing ice hockey, football and taekwondo, but the main thing for me was football.”

A commanding goalkeeper, utterly dedicated to his craft, Hedman turned professional with one of Sweden’s biggest clubs, AIK, in 1990. Four years later, he was part of the Sweden squad that finished third at the World Cup. Anything seemed possible and more ambitions were met as his career progressed.

Hedman played in the Premier League for Coventry City, the Champions League for Celtic and two major tournaments for his country. He received 58 international caps and in 2000 won the Guldbollen, the award for the best Swedish footballer. He was a model professional, someone who could always be relied upon to give his best.

“I reached those goals I had,” Hedman recalls. “I was working really hard. I was really focused as a young kid. I prioritised my career. I was really goal-oriented at a young age. I was late for training once during my whole career. I was really, really structured. I was always showing up on time for meetings and so on.”

Football had given Hedman a great life. It had enabled him to fulfil his dreams and see the world while being paid good money. It was everything he had wanted it to be, but it hadn’t filled the emptiness he felt inside. Playing in front of big crowds and earning the respect of his peers was a huge boost to his pride, but little more than a temporary distraction from his inner turmoil.

When his career finished, that was suddenly stripped away. Hedman was working as a pundit for Swedish channel TV4 but it wasn’t enough. His marriage was falling apart and he felt lost. Missing the buzz of playing at the top level, he latched onto a dangerous alternative.

“I had someone asking me if I wanted to try it. I said ‘Yes’. I got addicted the first time because it kind of made me feel like I was at home. I hadn’t really been able to handle my feelings. I flew away from them, with the football first of all, which was a safe environment when I had problems privately. As soon as I entered the pitch it was gone,” explains Hedman.

“Football itself kind of became an addiction for me. When I stopped, I didn’t really feel good on the inside, even though I had great jobs and I was well looked after here in Sweden. There was something missing. When I found the drugs, I felt at home. ‘Oh, is this how life should be felt?’

“From there it’s only downhill if you’re an addictive person. You’ve got no chance to manage that on your own. To me, it was a great escape from reality. The problems were gone. The bad feelings were gone. So, I kind of fell in love with the drugs the first time. They also became my best friend, in a way.” 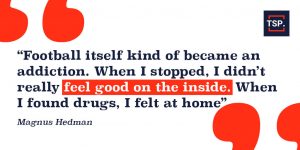 Hedman moved from amphetamines to cocaine and he was drinking heavily too. Once so dependable, his behaviour became erratic. He withdrew into his own world, isolating himself from friends and family as he hid his addiction. He tried desperately to stop but was soon consumed by it and couldn’t see a way out.

The cycle seemed impossible to break. He contemplated suicide on several occasions but could never quite bring himself to go through with it. Eventually, through sheer force of will, Hedman stopped taking drugs. He was clean for three years, but the lack of structure and support eventually told.

He relapsed at the start of 2017, reaching a state of utter despair later that year. Finally, he was ready to seek help. He contacted a friend who had overcome addiction and was able to point him in the right direction.

“I went to a recovery home on 20 November 2017. The first time I quit was really on bare knuckles. I had to fight and fight and fight. But when I went to seek help from professionals regarding addiction, that’s when life changed,” says the 47-year-old.

“There were four weeks in the actual place, doing the 12-step programme. I still attend a meeting a couple of times a week. That’s medicine for us. There isn’t a pill you can take to get sober. You have to do the work in these 12 steps. One of the big things is to become friends with yourself, before you try to become friends with someone else. That was a big thing I was working on.”

Hedman gradually managed to regain control of his life. He had to come to terms with the mistakes he’d made, forgive himself for what had happened and rebuild the relationships that had fallen into disrepair. He had to move forward positively rather than keep reliving the past. Guilt and regret were unproductive emotions to be left behind.

“It’s about making amends as well,” says Hedman. “But not just by saying that you’re sorry and coming up with excuses. You have to really be honest about it. That’s a big thing. But before you do that, you’ve got plenty of work to do with yourself.

“You kind of have to empty your bag of bad things – totally. Because this is nothing to do with finding your way back. This is a programme that creates a 2.0 version of yourself by doing things you haven’t done before.”

Now Hedman feels better than he has in a long time. Like everyone, he continues to experience inevitable fluctuations in mood, but not to anywhere near the same devastating extent he once did. He has projects to focus on, such as speaking engagements and his company, which distributes non-alcoholic wine. He is also helping others to tackle their own addictions, including former athletes.

Many struggle to adapt to life after sport. All too often, the transition to normal life proves problematic. They go from being well-paid and publicly lauded to largely forgotten about. The roar of the crowd dies down and the reassuring environment of the changing room, something that’s been with them throughout life, is no longer there.

The contrast can be stark and painful, with little guidance in how to adjust. Addiction, whether to drink, drugs, gambling or sex, can sometimes follow. The number of current and former players asking the Professional Footballers’ Association for help with mental health problems is on the rise.

“One part of it is the desire to be confirmed. When you have this confirmation, in a way, everything goes to performing. You have to perform something, get praised for it and that’s when you feel valued as a human being,” says Hedman.

“But when that disappears, you need to exchange that for something else that will lift you up and make you feel good as a person. Which is difficult when the only thing that has filled you with good feelings is performing on the pitch. Your self-confidence is massive, but your self-esteem is right down the bottom.”

Football has witnessed many falls from grace. Players at the very top level, who were idolised and acclaimed, suddenly cast aside and unsure what to do next. For some, it takes a massive psychological toll. The lack of support available is regularly discussed but rarely acted upon. Many believe that more needs to be done.

“I don’t know how it is today, but when I retired there was nothing. There has to be professional people, who know how to deal with it. The problem here is that if you mention psychologists or psychiatrists to a footballer, most of them will say, ‘Well, there’s nothing wrong with me.’

Being a footballer, particularly in such an opulent and adrenaline-fuelled environment as the Premier League, can be life-changing. Unfortunately, few are properly equipped to deal with the long-term consequences.

Each case is different, including Hedman’s, but the trend should be cause for concern.

Magnus Hedman: Former Chelsea and Celtic goalkeeper opens up about his battle with addiction
4.5 (89.33%) 15 votes