It’s been a long wait for Leeds United fans. But after 16 years of pain, Marcelo Bielsa has ended the agonising wait for Premier League football and given The Whites their pride back.

There were many low points between succumbing to relegation after a 4-1 thrashing by Bolton Wanderers in May 2004 and last season’s triumph. Leeds, as former chairman Peter Ridsdale termed it, “lived the dream” but nightmares became more common over the next decade and a half.

Their lowest ebb was a three-season stay in League One, but the most bizarre episode came in the Championship in 2014 when then-owner Massimo Cellino put an out-of-work manager whose only experience was with a non-league club in charge of Leeds’ intended play-off push. It didn’t go well.

Dave Hockaday’s four-year spell at Forest Green Rovers had been the definition of underwhelming. His first season had ended in relegation to the Conference South, although Forest Green were handed a reprieve when Salisbury City were sent down in their place after failing to come out of administration before the end of the campaign. Survival the following year was down to a similarly fine margin, Rovers avoiding the drop on goal difference alone.

Hockaday steered the club clear of demotion difficulties in his third season, when Forest Green finished a respectable 10th. Rovers then spent heavily on transfer fees and wages in a bid to earn promotion to the Football League, but Hockaday couldn’t improve on 10th position. After Forest Green lost seven of their first eight games of 2013/14, the board finally lost patience and Hockaday found himself out of a job.

Little did he know that less than a year later, he’d be handed the reins at Leeds, one of English football’s most historic clubs. This was truly among the most surprising managerial picks of recent times, Hockaday coming so far out of left field, he was almost invisible.

“I hadn’t applied for the job, I just got a call from an Italian-sounding voice asking, ‘Would you be interested in meeting my patron who has an interest in an English club?’” Hockaday told FourFourTwo of how the move came about.

“I thought, ‘Italian? Well it’s either Leyton Orient or Leeds’, so I did a load of homework on both. Then they asked me to get on a train, get off here, go round this back street and they would meet me there – it was very cloak and dagger.”

Once he’d negotiated the directions, Hockaday had a productive sit-down with Cellino, who’d unceremoniously turfed out former manager Brian McDermott in May. That didn’t overly concern the ex-Forest Green gaffer, though. After all, Hockaday reasoned, he was probably being sounded out for a coaching role, perhaps as head of Leeds’ under-23s. But after a five-hour chat featuring salt and pepper pots aplenty, the colourful Cellino offered him the manager’s job.

Not that Hockaday was the Italian’s first choice. In an excruciatingly awkward exchange at the new manager’s unveiling, Cellino hinted that Gary McAllister – previously the bookmakers’ favourite for the position – would have been a good option if only he was out of work. A brave member of the press pack interjected to tell Cellino that he was.

From the very start, Hockaday was wary. He was naturally honoured to have been entrusted with a prestigious role previously held by the likes of Don Revie, Brian Clough and Jock Stein, but he was also worried Leeds fans would be sceptical. He was right: the supporters reacted with a mix of incredulity and outrage, the unknown Hockaday receiving an icier reception than a wedding in Antarctica.

Cellino wasn’t unduly concerned, as you’d expect of an owner who’d fired 36 managers in 22 years at Cagliari. He’d deliberately chosen a low-profile figure like Hockaday, who’d been part of the Watford coaching staff when the Hornets beat Leeds in the 2006 Championship play-off final. 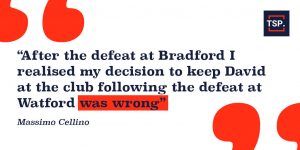 Firstly, the new man was cheap. He earned an annual salary of around £80,000, almost 10 times less than his predecessor McDermott. And perhaps more significantly, Cellino wanted someone who wouldn’t challenge him. The deal was that Hockaday would pick the side and could suggest potential signings to the recruitment team, but the club would have the final say on all transfers.

Perhaps they should have been more willing to listen to Hockaday, who claims Virgil van Dijk, Andre Gray, Craig Cathcart and Conor Coady were among his suggestions to the board. All four were dismissed, so too the experienced duo Nigel Reo-Coker and Mark Hudson. Liam Cooper was a successful signing – the club captain remains a key figure under Bielsa – but many of the additions that summer struggled to make an impact.

In Hockaday’s words, the recruitment strategy was centred on the purchase of “Italy-based players who weren’t good enough.” Eight new faces arrived from Catania, Cagliari, Milan, Ternana, Sampdoria, Sassuolo and Chievo, including Gaetano Berardi, Souleymane Doukara and Giuseppe Bellusci, who Hockaday later described as an “absolute pussy” in an interview with the Guardian.

It was clear in pre-season that Leeds fans, who must have felt as if they’d been strapped to a roller-coaster for more than a decade, would be in for another turbulent campaign. A two-week training camp in Italy featured a 16-0 victory over an amateur side, an exercise so pointless that United’s new goalkeeper Marco Silvestri switched sides late on. The squad’s senior players were bemused and subsequent friendlies against non-league English clubs weren’t exactly ideal preparation for a gruelling season in the Championship.

The campaign proper began with a 2-0 loss to Millwall in which Leeds were barely second best. That was followed a few days later by an unconvincing 2-1 win against Accrington Stanley in the League Cup, a game that ended with Berardi being sent off for a wild challenge.

Ill-discipline would become a theme of Hockaday’s short tenure. It was one of many signs that the squad was dysfunctional, with the manager unable to win over several key players. His policy of triple training sessions may have gone down well with Cellino – who insisted on being called Mr President by the head coach – but it was less popular among players who felt Hockaday’s CV was too bare to earn their respect.

Hockaday says Cellino never interfered with team selection, but he was a very hands-on owner nonetheless. The Italian players reported back to him from the training ground – and not always favourably – while Hockaday had to field regular 2am phone calls to explain to his boss what he thought were run-of-the-mill exercises and instructions. Those sessions didn’t include use of the swimming pool at Thorp Arch, though – that was deemed off-limits by Cellino, who didn’t want to pay the running costs.

Yet for all that Cellino wasn’t the easiest chairman to work for, Hockaday struggled to win over the players and supporters. He was also overwhelmed by the sheer size of the club, having gone from managing in front of barely 1000 people at Forest Green to more than 20 times that at Elland Road. “I could be up Mount Everest and there’d be a Leeds fan there,” he said.

Leeds were victorious in Hockaday’s second league game in charge. Their tussle with Middlesbrough could have gone either way, but for once fortune favoured the Dave, with a late strike from Billy Sharp getting the Whites up and running for the season. Hockaday claimed afterwards that “pressure is my middle name”, a comment reinforcing the suspicion he was trying too hard to impress.

A home game against Brighton & Hove Albion three days later gave Leeds the chance to build on that triumph over Boro, but the visitors ran out comfortable 2-0 winners. The nine-man Whites were then on the wrong end of a 4-1 thrashing by Watford, a result that left Cellino fuming and Hockaday out of a job.

Or so it seemed. Breaking the habit of a lifetime, the combustible Cellino decided to sleep on it and ultimately came to the conclusion that he, not Hockaday, was to blame for the poor start to the season. That judgment held for five days. With the camel’s broken back quickly patched up, Leeds travelled west to take on Bradford City in the second round of the League Cup. A 2-1 defeat and a fourth red card in six games saw Leeds fans confidently predict that Hockaday would be sacked in the morning. They were right.

“After the defeat at Bradford I realised that my decision to keep David at the club following the defeat at Watford was wrong and I had to change my mind on the coach’s position,” Cellino explained. “As a club we will now begin our search for a new head coach.”

Hockaday went on to briefly serve as Coventry City’s caretaker manager in 2015, before three months in charge of Kidderminster Harriers later that year. He’s now stepped away from the touchline for good and currently works as a coach at South Gloucestershire and Stroud College.

His 70-day stint at Elland Road will be far from the minds of Leeds supporters as the Whites attempt to extend their Premier League stay this season. But Hockaday, who says he’s a “massive Leeds fan” and “loves [the club] to bits”, will be watching on with interest. For better or worse, he too is part of the story of those 16 years in exile.