When you credit your pet dog for having better football skills than you, it’s probably even more of an achievement to look back on a 20-year professional career and 42 international caps than it would be otherwise.

But that’s exactly how former Chelsea and Northern Ireland frontman Kevin Wilson feels after a career spanning from 1979 to 2000. The diminutive striker may not have grabbed the headlines in quite the same way as some of his more illustrious colleagues, but Wilson’s work rate and determination served him well. 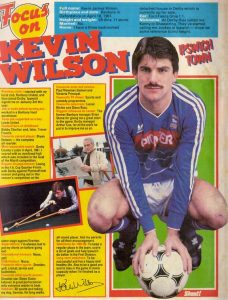 And it can all be traced back to a spell when he combined working in a food and drink supplier with turning out for non-league Banbury United.

“Part of my job was to get the food, pack it up and sometimes go out with the sales guys,” recalls Wilson in the latest What Happened To You? podcast. “Fortunately enough, where Banbury United were, it was only 200 yards from where I was working at the time.

“Brian Stone [the Banbury manager] believed in me and gave me the confidence. He took us out to trials at different places. I went to Leicester and to Wimbledon and played a few games, but he was a manager who was very hard on me and expected good things. He said first thing was attitude and application, which equals ability.”

It was to be the start of much bigger things for Wilson as he said goodbye to the warehouse to go pro. His breakthrough arrived at Derby County in 1979, but he says it wasn’t where he earned his first deal.

Instead, that came at Sheffield United. But after three games in the reserves – in which he scored two goals – the Blades ripped up the deal.

“The team doctor said I’d got a problem with my knee and they cancelled my contract,” Wilson recalls.

“As a 17/18-year-old, my world was shattered and I went back home. My mum was very matter of fact and said ‘you’ve got a choice my lad, you either take what they’re saying or you go about and prove they’re not right’.

“I went to a specialist called Mr Benson and he did all the tests with my knee, turned round and said there’s no problem – and he said he said there was no problem with my knee and gave me 20 years in professional the game. He was virtually right because I started in December 79 with Derby and one of my last games was with Northampton in 2000. He was maybe one of the biggest influences on my career because of what he put out that day.”

That was all the ignition Wilson needed and he went on to plunder goal-after-goal after first moving to Derby, then following up with spells at Ipswich Town and Chelsea.

It was at his spell at the Baseball Ground that the forward earned the nickname Shoestring due to his moustache resembling one by eighties TV sleuth, The Private Detective, and then at Ipswich where his dog took centre stage with appearances on the pitch at half time.

Across his career, Wilson came into contact with a host of big names from the era. But one that particularly left a lasting impression was Ken Bates, the controversial former Chelsea owner, who was in his pomp during Wilson’s time at Stamford Bridge.

“Ken Bates was very black and white, there were no grey areas with him so you knew where you stood,” Wilson adds. “He was very hands-on, he was always around the club and would pop down to the training ground to watch you train. He was a big figure in football, not just at Chelsea.”

Despite that Wilson flourished. And after making it on to the international scene, he eventually became a coach and then a manager as his playing days wore down.

But just as when he was starting out, Wilson’s message has remained the same. “You’ve got to work hard to make the most of your ability,” he says. “I’d tell any young pro the same.”

Even if he didn’t utter the words himself, there’s definitely a saying about working like a dog that’s relevant here.