Unpredictability is a massive part of football’s appeal. While there are no sure things in a game with so many variables, Kevin Phillips came pretty close. Wherever he went, he virtually guaranteed goals. There were 282 in total across 20 years as a professional.

A devastatingly simple act in theory, goalscoring is fiendishly complex in practice. There are plenty of interlinked parts that need to fall into place, and even the finest exponents struggle to adequately explain the art. It’s often spoke of in terms of instinct, a sixth sense for where the ball might land at any given moment.

Having spent a whole career finding the net with frightening regularity, Phillips is now trying to teach others how it’s done. He had an uncanny knack of ghosting into space at precisely the right time to score. As a coach who’s spent time at Leicester, Derby County and Stoke, he is looking to pass on his wisdom. Although he admits that it can prove difficult. There’s no magic formula.

“I have many debates about whether you can coach instinct,” says Phillips. “I’m a big believer you can get better at it but when you look at the strikers down the years in the Premier League – Owen, Fowler, Cole, Shearer – a lot of their goals were scored on instinct. People like Thierry Henry had the gift of picking the ball up deep and taking players on and scoring wonder goals, whereas those other players were in the right place at the right time. For me, that’s instinct.

“The majority of that you can’t coach, but you can get better at it. You can certainly drill players in making the right kind of runs, running along the line, staying onside, timing runs and trying to get in the right areas, but I often found myself in positions and didn’t really know how I got there. I just ended up there. I think that’s something you’re born with.”

Phillips rose to prominence in such a strong era for strikers and was competing with many of those he cites for a place in the England set-up. Add Teddy Sheringham and Emile Heskey into the mix and there were plenty of options to choose from, all playing and scoring regularly.

He reflects that he did well to win eight caps in a field of such impressive depth. The same can’t be said for the current crop of English strikers. There’s plenty of time for them to blossom over the coming years but Tammy Abraham and Dominic Solanke both made their senior international debuts in 2017 after just a handful of games at the top level. The competition is weaker.

“When I look around at the English strikers nowadays, you probably only have to get yourself 10 Premier League goals and you’ve got a chance of getting in the England team,” Phillips says.

In my time, competing with those guys, you’d have to score 20 or more because all of them were scoring freely. It was an era when we were blessed with many great strikers and it was great to put myself up against them.

“One of the biggest things that people say to me is that I probably should have had more England caps, but I was pleased to get eight. When you’re competing against the strikers that I’ve just reeled off, maybe I was lucky to get eight caps. Nowadays I’d have probably had 58. I was in every squad for two years but the biggest regret for me was not playing in a major tournament.”

He came close, being chosen in Kevin Keegan’s squad for Euro 2000, but didn’t see a single minute of action as England went out in the group stage.

Although Alan Shearer and Michael Owen made for a formidable partnership, Phillips had just finished his first season in the Premier League with 30 goals for Sunderland. He was the most prolific player on the continent and remains the last Englishman to win the European Golden Boot. Harry Kane is the only one who has come close to challenging since and Phillips hopes to see him end that barren run.

“I think his [Kane’s] work ethic is excellent,” explains Phillips. “I certainly learned over the years that the harder you work, the luckier you get. It’s that old Gary Player saying. I do believe in that. Harry Kane doesn’t stop running and he gets his rewards in the end with his attitude – his desire and hunger. That’s coupled with the qualities he possesses in terms of striking the ball, his intelligence in knowing where to run, his hold-up play, and he can head the ball as well.

“I remember watching him several years ago when I first started coaching at Leicester and Tottenham came to the King Power. He was starting to make a name for himself and, I have to say, I wasn’t that impressed. But I stand corrected now because since then he’s a totally different player. He’s come on unbelievably well, which suggests to me that he’s someone who can also process the information that he’s being given on the training ground and take that into games, which is great to see.” 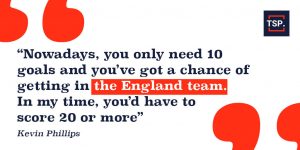 Aside from everything else, mental strength is also massively important for a striker. Many wilt under the pressure, the overwhelming sense of expectation that comes with being paid to score. Crowds can take an unforgiving tone with even the most hardworking failures. Phillips built a career on the basis of his reliability in front of goal. Given the right service, he’d do the rest.

He specialised in opportunistic efforts and poacher’s finishes but had all bases covered. Headers, long-range shots, penalties, delicate lobs. Phillips compiled an impressive portfolio but one stands out above the rest. It was a combination of factors that means he considers the goal to be his best – the calibre of opposition, the technique it required and the sense of occasion.

“The goal I scored for Sunderland against Chelsea at the Stadium of Light, which was a dipping 25-yard volley, was the one that stood out for me. It was against a Chelsea team that had the likes of Zola, Poyet, Desailly, Wise and Leboeuf in their side, so I’d have to say that was the one.”

It came in the midst of his breakthrough season in the top flight, as Phillips forged an irresistible strike partnership with Niall Quinn that propelled newly promoted Sunderland to seventh in the table.

Both grabbed a brace that day to secure a thrilling 4-1 win. The pairing was something of a throwback: the target man flicking the ball on for a nippy striker who played on the shoulder of the last defender. With little guidance, it seemed to work. They scored 44 goals between them that year.

“We kind of understood each other,” the marksman recalls of his little-and-large partnership. “We got on well on and off the pitch, which I think helped. The advice and coaching that I got off Peter Reid was really just to play around Niall, to try never to be more than 10 or 15 yards away from him.

“When the ball was going up to him, it was about reading his flick-ons and looking to get in behind. At that time the Premier League hadn’t really experienced an awful lot of a little-man, large-man partnership. Niall would flick the ball on and I’d read where it was going, and it kind of took everyone by surprise.”

Once a staple, strike partnerships are no longer a constant in the English football landscape. With a greater emphasis than ever before on controlling possession and the flow of the game, most clubs favour five in midfield. Dropping a striker can also help to block up space and avoid defences becoming unnecessarily exposed. Yet tactical trends seem to go in cycles, and Phillips thinks two up front could be due a comeback.

“Most teams now play with a lone striker. They tend to want to get an extra midfield player into the team and play with two wide players who have more pace and are more direct. Change of tactics is one of the main reasons, but for me, why wouldn’t you want to get two strikers on the pitch because you double your chance of scoring goals? Ultimately, if you score more goals, you’ve got more chance of winning football matches.

“It certainly has changed. I was brought up in an era when it was uncommon to play with one striker. I had to do it a couple of times and I hated it. I just felt I wasn’t going to get much of the ball and I wasn’t going to get in the game a lot so I hated doing it. It was a lot more enjoyable playing alongside someone because you got that understanding and that telepathy. Me and Niall definitely had that.”

Due to his remarkable longevity, which he attributes to his desire to succeed and emphasis on preparing properly, Phillips has intimate, first-hand experience of the way football has changed over the past 25 years. Starting out in non-league with Baldock Town, having been released by Southampton as a youngster, he ended his career back in the Premier League at 40 after helping Leicester City to promotion.

Tempted to squeeze in one more season, Phillips reluctantly decided to call it a day and went straight into coaching with the Foxes. He moved on to Derby in 2015 and was linked to the top job at Sunderland in 2017 because of his affinity with the club and its supporters.

But while Phillips hasn’t stepped up to take a leading role yet, if his ice-cool composure in front of goal is anything to by, he’ll have the mentality to stay calm in the dugout.

This article was originally published on 11 December 2017.