Careers, whole lives, can turn on odd moments of fortune, on those peculiar twists of fate that sneak up on us from time to time. For Júnior Caiçara, his came in the second leg of the final qualifying round of the 2014-15 Champions League.

Júnior, a then-25-year-old right-back from São Paulo, was playing for the Bulgarian champions Ludogorets, who had already battled their way past F91 Dudelange and Partizan Belgrade. Next up was a tie with Steaua Bucharest, with a place in the group stage on the line. In the first leg in Romania, they lost 1-0 to 1986 European Cup winners. But the defeat was narrow. Hope remained.

Back in Razgrad, after pushing and pushing to draw level on aggregate, Júnior’s compatriot Wanderson finally smashed in a volley from the edge of the area with seconds left on the clock.

“We went into extra-time and in the second half of extra-time our goalkeeper was sent off,” Júnior tells The Set Pieces.

“We had already made all our substitutions, so our Romanian centre-back, Cosmin Moti went in goal. And it went to penalties, against Steaua Bucharest.”

Fans must have feared the worst, but, he continues, “Moti saved two penalties to send us into the Champions League group stage. That was the moment that marked me at Ludogorets. We realised the dream of the club president and all the players.

“We took Ludogorets to play against Real Madrid, Liverpool and Basel. We managed to get a 2-2 draw at Anfield. Then we managed to beat Basel to qualify for the Europa League. It was a great achievement.”

It was a moment that changed the course of his career. After the exposure the European campaign brought him, the Brazilian got two big moves: first to Schalke 04 and then to Istanbul Basaksehir, where he recently helped the club to its first-ever Turkish title.

Júnior had never really made it in Brazil, appearing just a handful of times for modest clubs before going to try his luck with Gil Vicente in the Portuguese second tier. There, he was promoted in his first season and reached the Taça da Liga final against Benfica in his second. Then came the move across the continent to Bulgaria and a bit of a shock.

“When I played in the league and saw it wasn’t the same level as Portugal, I thought I’d end up stuck in Bulgaria for the rest of my career,” he recalls. “It was difficult, it was so cold, 16 degrees below zero. The food was different.

“But thanks to God, we qualified. I played in the Champions League and Europa League with Ludogorets and because of what I achieved in Bulgaria I was sold. Bulgaria is a bit of an unknown country in footballing terms. When I got there, I didn’t believe I’d one day reach a big club like Schalke.”

After a first season in Germany where he played more than 30 games, a new manager and new sporting director were brought in.

“New players arrived and I got fewer chances,” he says. “In six months, I’d played 10 games, so I thought it was time to be loaned out or sold.”

His friend Márcio Mossoró, who was playing for Basaksehir – a new club from the western suburbs of Istanbul that counts president Recep Tayyip Erdogan amongst its relatively few fans – convinced him to sign and, three and a half years later, that’s where he remains. 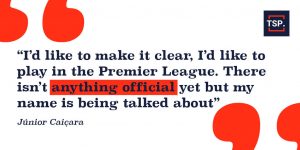 “I didn’t think the Turkish league would be so difficult,” Júnior remarks. “People say it’s only Fenerbahce, Galatasaray and Besiktas, and the rest aren’t worth bothering about. That’s not at all what I’ve seen in these three years.”

Putting those links between Basaksehir and Erdogan to Junior, he acknowledges the president’s presence at games and his occasional visits to the dressing room.

“He greeted the players, congratulated us for our work. It’s different, it’s strange for me,” he says, delivering a line that feels well-rehearsed.

“[Erdogan] helps Turkish football, he helped build stadiums, including Basaksehir. But that doesn’t mean he puts his money into Basaksehir or that he pays our salaries, that’s all lies.”

If Erdogan’s fandom sets tongues wagging elsewhere, the infamous Turkish support has clearly had a big impression on Júnior. No sooner did any mention of their passion come up, he butts in.

“Fanatical”, he blurts out, with a genuine air of amazement in his voice. “I didn’t expect them to be as fanatical as they are.”

He says it can get to appoint where it affects players’ performances. “Against Galatasaray last year, we played a really important game. There were only five games left and we were one point ahead. We went to play at their stadium and it looked like hell.

“It was all red, people letting off flares. They sang from start to finish. I think that really motivated their players and they won. The fans do make a difference here, especially for Trabzonspor, Besiktas, Fenerbahce and Galatasaray. They went above us and ended up winning the league.”

That experience of narrowly missing out was nothing new. In his first half-season in Istanbul, Basaksehir finished second in the Super Lig, before finishing third in his first full season and then second again behind Galatasaray in 2019. Basaksehir, he says, “is still a new club, so it needs to go through that process. It was bad not winning the title, but we gained that experience. It made us stronger.

Last season he played alongside Robinho, Martin Skrtel and Demba Ba, whose experience he says was vital in calming the nerves in the home stretch. But Júnior Caiçara reserves his most effusive praise for another former Premier League player, the ex-Manchester City and Arsenal defender Gael Clichy.

“He has no equal. I’ve never worked with someone like him,” Júnior says. “He works 100%, always at the limit, always demanding the best from others. On days when you’re tired or not training well, he’ll be onto you. After training, he encouraged the [young Turkish players] to train more and was always the first to help. I’d like to spend the rest of my career playing alongside him. He motivated me and helped bring the best from me.”

Despite that league win, Basaksehir could not carry their form over into the Europa League. They had won the first leg of the last-16 tie against FC Copenhagen 1-0 at home, but after the long quarantine and the return to football in June and July there was nothing left in the tank. “We were knackered,” he says, “not physically but mentally. I noticed it in the dressing room before the game. They played really well. But the tiredness stopped us from playing our best game.”

And he believes that mental and physical fatigue could have an effect on the coming campaigns about to get going across Europe.

“It’s not only at Basaksehir, it’s not only in Turkey, it’s going to affect every country. There’ll be a lot more injuries this year. I’m trying to take as much care as possible to prevent myself from getting hurt. Playing in empty stadiums is a disadvantage for the big clubs, too. So, I think there could be some surprises.”

After that Turkish title and the relatively good run in Europe, Júnior could have one last big move in store in this transfer window, with West Brom and West Ham both reportedly interested in acquiring his services. The usual caveats are produced, but he sounds enthused by the prospect.

“Until an official offer arrives, I’m a Basaksehir player,” he responds. “But I’d like to make it really clear that I’d like to play in the Premier League. There isn’t anything official yet, but my name is being talked about at those two clubs, because of the season I had. They both need a right-back. It’s a great league, I’d love to have that experience.”