When your pregnant mum is so focused on you qualifying to be a Scotland international that she drives nine hours to get over the border, you know you’re destined for big things.

That’s exactly what John Colquhoun did so her son would be eligible to pull on the Tartan Army’s blue strip. And two caps later, it proved worthwhile (even if the rules changed for international qualification by then).

The former Celtic and Hearts winger came through the ranks in Scotland at a time when football north of the border was in rude health, with a host of household names emerging during that era – a far cry from the current state of the Scottish game. 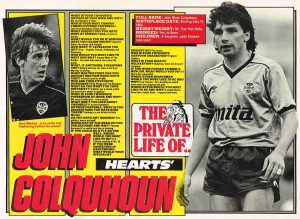 That was one of the talking points, Colquhoun, who ranks The Set Pieces columnist Brian McClair among his closest friends, spoke to What Happened To You? about an interview with Match magazine back in 1986 (pictured above).

While there was plenty of talk about Colquhoun’s career – which included stints down south with Millwall and Sunderland – the interview tackled a number of non-football issues spoken about in the Match article, such as politics and music.