He was a long way from Nando’s. He knew that now. He was sat at her table in her multi-million dollar mansion in Clearwater, Florida.

He nodded, even though he wasn’t much of a drinker. He’d tried cider once, but he couldn’t figure out why anyone would ruin a perfectly good glass of apple juice.

Jermaine Jenas was out of his depth. What was he doing here? He didn’t really know who Kirstie Alley was. He vaguely remembered her as the smoky voiced vixen from that show he didn’t quite understand that was on Channel 4 while he ate his Sugar Puffs before training started. 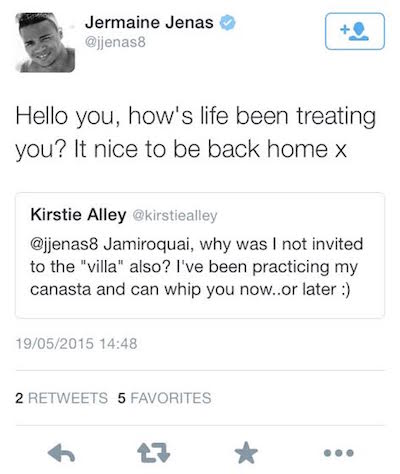 She was 64 – exactly double his age. Should he do this? It had all happened so fast. When he could he would steal glances at her as she rushed around the kitchen looking for the corkscrew.

“I know the damn thing is around here somewhere,” she said.

“No worries, take your time,” his voice shook as he answered.

There was no doubt that she looked incredible. Her sparkling blue eyes were like jewels, her hair showed nary a tint of grey and that voice. Oh Marone!

Stop it, he thought, she’s not invited you here for that – she wants to play canasta. But in the back of his mind, he knew that he hadn’t travelled all this way just for a game of cards.

The wine made a sumptuous lapping sound in his glass and she twisted the bottle at the end with a smile. She’s a real pro at this, he thought.

“So where were we?” she said taking a seat opposite the former England international.

Jenas looked down at his drink and made sure to sniff it like they do in restaurants. “Mmm, you have excellent taste,” he said hopefully.

She smiled again. But deep down, she was having doubts of her own. Was this really the man she knew? He was always wearing that hat in his videos and she swore he was wearing it when they met. She wanted to ask him about it but didn’t in case it was a sensitive issue.

Her memory had been so hazy lately, but now that the kids had flown the nest she was glad to have some company. Besides, whether he was the man she thought him to be or not, he was handsome nonetheless.

It was getting dusky. The sun began to set, illuminating the bay as the lights on the promenade came on and flickered in the near distance.

“I’ll get some candles, then we can play,” she said. Perhaps it was going to be one of those nights after all.

Jenas took a heady gulp of his wine. He didn’t know whether the effects of the alcohol were already taking their toll or if his jetlag had hit him harder than first expected, but he felt dizzy. This was intoxicating, in more ways than one. Since his retirement he had struggled to find something that could replace the buzz of a Saturday afternoon, but apparently meeting famous actresses of the 1980s through social media sites was the answer.

She sauntered back into the kitchen with two candles and a deck of cards in her hand. “Let’s take this somewhere more relaxed,” she said, and motioned for him to follow her with a flick of the head.

Jenas stood, but his legs felt weak. ‘Come on, Jermaine!’ he told himself. ‘You’ve won the Carling Cup for Christ’s sake, don’t get overwhelmed now.’

He followed her out on to the deck. The warm Floridian air made him feel even drunker.

“You ready to get your ass beat like I said?” she asked with a wry smile. You could take the girl out of Wichita…

“I don’t think you know what you’re dealing with,” he replied, trying to sound dangerous.

They played by American rules, naturally, which was slightly easier to understand than its native Uruguayan form. True to her word, she won game after game as they laughed and drank the entire bottle of wine. Jenas was surprised at how much he enjoyed the crisp, fruity taste, and couldn’t help but feel a jolt of electricity every time she referred to him as ‘hon’.

By now, it was late. The conversation had wound down and all they could hear was the crashing of the waves just over the bank. All evening he’d been worried that she would realise that he wasn’t JayKay from Jamiroquai and that she might call him out on it. The embarrassment would have killed him.

But she hadn’t said anything. They had been getting drunk and talking about their lives. At one point, she tried to explain to him her reasons for joining the Church of Scientology. She was very clever with it, and on more than one occasion Jenas responded positively to an invitation.

She slid her hand across the table and their fingers interlocked. The tension from the start of the evening had now dissipated into something more profound. Something tinged with sadness, but also with hope.

They stared out at the blackness of the sea. Two lost souls who had found each other in the shadows.

Admit it. You were not prepared for these feels. If you want to read more from Steven Green, you can follow him on Twitter and shout at him until he agrees to write a book. (@doe_ray_egon)