It’s said that it’s always helpful to have friends in high places. Yet, when non-league boss Jamie Day received a message encouraging him to apply for a national-team job, he could have been forgiven for giving his little black book a kiss.

Day wasn’t even working as a manager at the time and was earning his keep as Adrian Pennock’s number two at National League Barrow.

So, when a friend involved in the recruitment process for hiring the new Bangladesh manager asked if he’d consider sending in his CV, Day jumped at the chance.

“I went and met the Vice President in London, we had a good chat for a couple of hours, I explained how I’d do things and he explained what the situation was. It looked like a real challenge,” Day recalls of the meeting in 2018.

“I like working with teams that want to build and start again, and this was the case with Bangladesh. They’d fallen down the rankings and were sort of at a low ebb and they wanted someone younger to come in and try to develop it and take it further.”

Arriving in Bangladesh, Day saw the potential to build something long-lasting. He’d been building a promising career in the dugout with Welling, Ebbsfleet and Braintree, before taking coaching roles in the Football League at Forest Green and Gillingham that led to following Pennock to Barrow.

But taking the reins of a country with more than 160 million people opened up so much potential to create a legacy.

“There was a good group of players when I first met them, very willing,” he says. “In turn, they were a bit limited, a little bit out of condition with physical shape… their training programme was slightly different to how we would do things in the UK.

“It’s a bit more relaxed, so we changed that and we put our ideas down and said to the players, ‘You either buy into it or you’re not part of the national team’. And in fairness to them, the majority of the players bought into the programme and have kept that going over the two years and are in much better shape now than when we first took over.”

Day took inspiration from fellow Englishman Stephen Constantine, who took India from 173 to 97 in the FIFA rankings, in just under four years in charge between 2015 and 2019.

“I think Stephen did very well with India,” Day explains. “Obviously now he’s gone, his work is probably more appreciated, which happens. I think we’ve had a good two years but we’ll be judged on if we can win a competition.”

If the 40-year-old is going to do that, he’ll have to pull on all of his experience as an Arsenal trainee – despite only making one substitute appearance for the Gunners in the 1997/98 double-winning season – and from his time with Bournemouth, where he played alongside manager-in-waiting Eddie Howe.

Day’s first tournament experience came with the 2018 Asian Olympics in Indonesia, which they trained for during a four-week stint in South Korea.

“It was South Korea’s national training facility, which was obviously a very good standard and really helped in our preparation,” he explains.

“We got them in really good shape, got them organised, disciplined and we went to the Olympics and did very well. We got out of the group stage, which Bangladesh had never done before, so we were pleased that at the first tournament we’d made history. We were unlucky not to get a little bit further.” 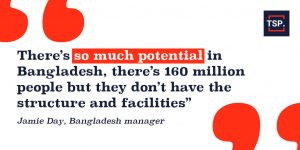 Bangladesh’s turnaround continued into 2019, defeating Laos over two legs to reach the second qualifying round for the 2022 World Cup and also picking up a bronze medal at the South Asian Games in Nepal.

Looking back at his first two years in charge of the Bengal Tigers, he can see some clear yardsticks showing the progress the team has been made since picking up the reins.

“I think from when we first took over to now, we’ve done very well,” Day says. “I think they’d won three games out of 25 before we arrived and hadn’t won for two years. To change that around and have a good percentage of wins has been very good. We’ve taught the boys how to win games now and be competitive. We’re really pleased with the progress.”

One of the biggest hurdles to success has been recruitment, yet Day also ranks it as one of the most rewarding parts of his job.

“It’s really tough,” the former defender admits. “There’s so much potential in Bangladesh, there’s 160 million people but unfortunately they don’t have the structure and facilities in place to be able to cope with all the areas of the country. So, for us, all our players are local players that play for local teams.

“We have one who was born in Denmark, our captain, who has Bangladeshi parents and we’ve done it that way. We’ve tried to look at other players coming in from abroad, but we found that difficult to get them to commit.

“We’ve tried to build a club environment when they [the players] come to training camps. We don’t want it to be that people are scared to play for the national team because there’s a lot of pressure on these players. They all knew each other, they wanted to be part of the national team and felt like it was a club team, so they could go out and play and express themselves.”

There was perhaps no better expression of the team’s character than in their 1-1 draw against India in Calcutta’s gigantic Salt Lake Stadium during World Cup qualifying.

“For us to take the lead and really should’ve scored another couple of goals and killed the game off, just that night everyone performed to their maximum and did everything we asked of them. Tactically we were very good, we got it all right. Unfortunately, they scored at the end to get a draw but that’s probably one of the best performances we’ve put in against a really good team.”

In order for these improvements to continue, Day has laid out a series of recommendations for the domestic game in Bangladesh he’d like to see implemented, including get more native Bangladeshis playing football.

“At the moment, we have [a maximum of] five foreigners, four that can play on the pitch and one can be sub, so I feel for us to develop, we need to cut that figure down.

“I’d seen an idea in Canada that there was [a certain number of] under-23s that had to play in the squad, in the match XI and over the course of the season. I quite like the idea: I think for us we have a young squad, we want younger players coming through. We gave an idea that there has to be five under 23 players in the 16. There has to be two playing at all times, just so that we can develop and progress these younger players.”

Instilling new habits is crucial to Day’s Bangladesh project, but can sometimes mean trying to reverse national cultures to enhance performance. Getting all the players to join a WhatApp group to is one thing, but weening the players off the local delicacies was a tougher sell.

“Unfortunately for them, they don’t always get to eat the right foods and a lot of food in Bangladesh is high-fat and a lot of rice, and a lot of bread, so we had to change that,” Day says. “We gave them diet sheets, we weighed them regularly, we took their fat content and we got them in the gym a lot more.

“I still think there’s some work to be done. We’ve got the second half of the World Cup to complete and we’d like to win a game if we can in the group stage. I think Bangladesh have only ever got one point at this level, so if we can get more than that I think that’s another barrier that we’ve broken.”

It may be a difficult task, but as Day’s appointment proved, the unlikely can happen.