“I took Twitter a lot more seriously early on. All the nonsense and political stuff. And I’d get into arguments and all of that,” says comedian Bilal Zafar.

“It was when all the ‘Cakes’ stuff happened, I realised it’s just silly. No one should be serious on there. There’s absolutely no point. You’re not going to change anyone’s mind really.”

‘Cakes’ is the solo comedy show in which Zafar recounts a real-life situation where his Twitter page @Zafarcakes – a pun on his own name simply because he likes Jaffa Cakes – was mistaken for a Muslim-only bakery.

Amid the sheer stupidity and unsettling racism he faced on social media, the 30-year-old found comedy and created a show that saw him win the New Act of The Year Award. 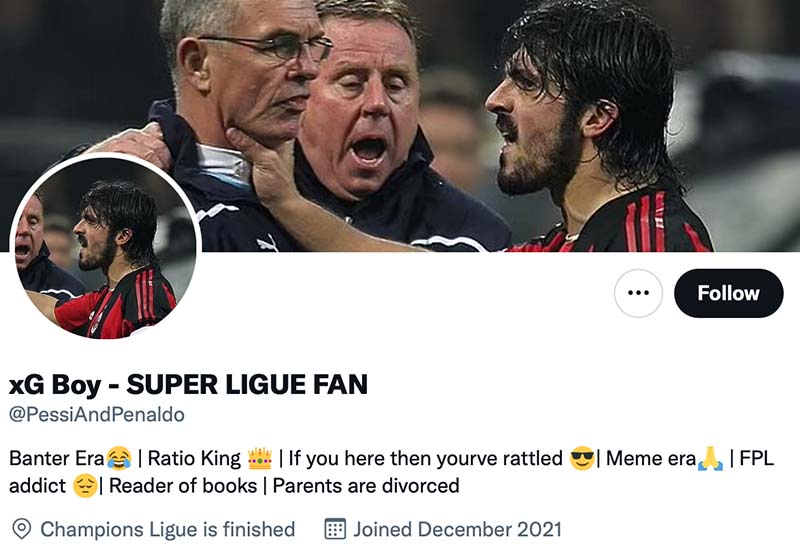 Since then, largely down to the pandemic, he has moved his comedy to the streaming service Twitch. In light of that, he has taken on the world of Football Twitter (FT) with his parody account ‘xG Boy’.

Nowadays, a strong majority of football fans get the bulk of their news via Twitter. If you’re one of these people, you probably would have witnessed plenty of weird comments and phrases from within the online football community.

FT is an odd place full of baffling terms and insecure one-upmanship. Fans will defend their favourite players and clubs with red-faced rage while also looking to dismiss the talents of their rivals.

As a big football fan – an Arsenal season ticket holder, no less – Zafar was all too familiar with this world. But it was the phrasing and terminology within FT that really caught his eye.

“The language is really cringe. But there’s so much of it. That’s the thing,” he says. “The whole thing is really silly.”

“I made the decision that I’m not being mean to people. I’m not actually being nasty to them. The meanest thing that xG Boy will say to someone is ‘ratio’. What does it even mean? It doesn’t make any sense.”

Ratio is a phrase (not unique to FT) written as a reply to a tweet, where the user will hope their comment gets more likes than the original post. But it doesn’t always work.

Other phrases that seem to pop up with great regularity are ‘washed’ (used to claim a player is not good anymore), ‘in the mud’ (used to say a club or a player has done something bad), and perhaps most famously, ‘Penaldo’ (used to infer that Cristiano Ronaldo only scores goals from the penalty spot and is a ‘washed’ player). This accusation has been thrown at Lionel Messi too with ‘Pessi’ – and inspires xG Boy’s handle, @PessiAndPenaldo.

“It’s just that whole language, it’s not funny, any of it. None of it is original, it’s just rehashing the same jokes again and again,” Zafar laughs.

He often gets his audience to suggest things for xG Boy to type during his streams. They help him surf FT for trending content and engage with different users.

“You know, it’s really nice having an audience there and they suggest what to tweet,” he says. “And they’re just having a laugh with it. And like I say, we’re not trying to be mean or anything, it’s just fun.”

It’s telling that, despite his obvious trolling, his character fits in seamlessly with the world of FT.

“I had a couple of people in my Twitch chat saying, ‘oh it’s too silly and people will know it’s a joke’,” he explains.

“But you can’t [tell]. It’s exactly the same, you can’t tell if any of these accounts are a joke, the whole thing is just mad.”

Of course, within the world of social media, nastiness often does arise – as Zafar witnessed first-hand with his Cakes experience.

A study of Twitter by The Guardian found 2,000 abusive messages, including many racist posts, directed at the England national team during the three group stage matches of Euro 2020.

Recently, a 64-year-old man was handed a suspended sentence for racially abusing Rio Ferdinand on Twitter.

Despite those cases happening in great numbers, Zafar is adamant the side of FT he engages with lacks these sinister individuals, apart from the occasional edgy joke.

While it’s impossible to know the average age of the FT crowd – due to their anonymity – you get the sense that most users are younger.

Perhaps the childish nature of the community, which sees infantile behaviour rewarded with more likes and retweets, allows FT to exist without such real-world hate seeping in.

“So far, from what I’ve seen, I’ve not seen anything that sinister from it,” he explains. “It’s just stupid, isn’t it, really?

“That’s why I like it, though. It’s kind of refreshing as well. That it’s not nasty. It’s just silly and annoying [laughs].”