Andy Welsh can still remember the swell of emotion he felt when he heard the news. Bury had been expelled from the Football League and faced being wound up. A club with 134 years of history were left without a league to play in.

The former Sunderland and Leicester City winger was overcome with disbelief. Much like many others, Welsh believed the threats made against the Shakers wouldn’t be realised: a new investor would be found in the 11th hour or payments would be made to save the day. But no saviour was found.

Twelve months on and Welsh is even more invested in the Bury story, having just been appointed as manager of phoenix club, Bury AFC, and the man charged with providing renewed hope in the Greater Manchester town’s football fraternity.

“What’s funny is that when I took over, somebody retweeted one of my tweets from 12 months ago,” explains the 36-year-old.

“I put something along the lines of ‘This is absolutely disgraceful. You’ve got fans who are willing to put their own money in, so the fact this has been allowed to happen is a joke’.

“The fans at any club are the main part, there’s no player or chairman who matches that. Football clubs are nothing without fans and what was allowed to happen to them was a disgrace. A year ago, I had a real annoyance at the situation, so I feel their [the fans’] pain a bit.”

The new Bury Welsh has taken over is barely recognisable to the last one that entered a football pitch representing the town in May 2019. Back then, Bury FC were celebrating an unlikely promotion to League One after defying the financial hardships they were suffering to reach the third tier.

Now, the newly formed club – which, to many, will always maintain an intrinsic link to Bury’s past – will line up in the North West Counties League Division One North, six promotions from the Football League.

Bury AFC won’t even be able to enter the FA Cup this season and have no ground to call their own. Instead, they’ll be tenants at Radcliffe’s Neuven Stadium, although there’s still hope the new side will appear at Gigg Lane one day.

“We don’t own the ground, so we’re not going to be playing at Gigg Lane until we’re able to acquire it,” Welsh says.

“That’s not a huge thing for me at the moment and not for the fans [either]. They’re just desperate to see some football and get things up and running again, then the rest will take care of itself.

“It would be fantastic to get Gigg Lane back one day and play from there, there’s no doubt about it and everybody would love that. But it’s something I’m not getting involved in right now – if it’s something we haven’t got, I’m not thinking about it until it happens.”

We are delighted to announce that Andy Welsh has agreed terms to become Bury AFC Manager.

If the pressure of expectation on Welsh to help Bury AFC kickstart their journey to the Football League isn’t big enough already, the challenge of creating an entirely new squad is exacerbated by the Covid-19 pandemic.

At the time of writing, there’s still no definite date for the season to begin, no ruling on if Bury’s fans will be allowed to watch their new side’s first outing and plenty of complications when organising training sessions.

Welsh and his coaching team are having to prepare multiple sets of clean bibs, limiting the number of players taking part in sessions and regularly cleaning balls to make sure they’re adhering to the government’s coronavirus guidelines for team sports.

The fan-run Bury AFC board have even had to create a special Covid budget for Welsh to follow when it comes to building his squad. Although with the new club expecting to draw in a number of the original Shakers supporters when they’re allowed to attend, the difference between what’s possible with and without a crowd is significant.

And Welsh says the perception that because Bury is a big name to be playing at this level of non-league they will have deep pockets, isn’t necessarily true.

“One thing I’ve got to accept is that pressure will come with the role at this level,” he says.

“The biggest thing we want is sustainability at the football club, so we’re not going to spend what we haven’t got. That’s the biggest thing I’ll have to manage because players will think they’ll come here and get paid hundreds of pounds. That ain’t going to happen.

“I’m getting phone calls every day from players wanting to come. As soon as you talk about the financial situation, that seems to see a few of them because it isn’t as though we’re going to be throwing money at it.”

Despite that, Welsh’s target is to win promotion in his first season and he has dreams of taking the team back up the leagues. But he’s not underestimating the challenge. 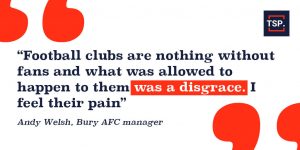 One of Welsh’s final clubs as a player was FC United, an outfit set up by Manchester United fans who opposed Malcolm Glazer’s takeover, but despite best intentions, their surge up the divisions stalled in National League North and they were relegated back to the seventh tier in 2018/19.

A host of other former Football League clubs clog up the National Leagues, with the likes of York City and Stockport County harking over past glories. And there’s plenty of other hurdles to pass to even get there.

“We’re going into the first season wanting to get promoted, there’s no doubt about it, but I just think we need to be wary of factors that may go against us,” Welsh adds.

“We’re going to be everyone’s cup final and the players have got to prep their minds for that. They need to have their mindset of every time a team comes up against you, there will be players saying ‘I want to be in that Bury team’ or ‘I’m good enough’, so it’s disrespectful to say we’re going to the win the league and promotion.

“We can’t run before we can walk, but what we want to do first and foremost is make sure there’s a first team to support and then hopefully the success will build from that.”

There’s no question Bury will be the favourites to go up when the season does begin, though. And if Welsh and his players can channel an ounce of the anger at what happened to the town’s football club last year into the new side, they’ll be a force to be reckoned with.