The CNG Stadium is suitably bright-eyed and bushy-tailed on this fresh September evening. Harrogate Town’s players are zipping across the pitch with relentless fervour, pressing high and bounding towards the opposition each time they’re in possession. Wrapped tightly in gold and black scarves and hopped up on Harrogate Town Ale, supporters on three sides of the ground ooze enthusiasm. It’s hard to believe that football here was submerged in such a deep sleep not long ago.

Even on a typical weekday such as this, the town of Harrogate has a flourishing feel to it. Amid the stately historical architecture and sweeping green parks, it’s a place where jovial barmen serve up encyclopaedic knowledge of locally-brewed ale alongside pie and peas, and where even rollie-smoking, trackies-and-cap-covered teens smile politely as you stroll through their territory outside the village corner shop. But until recent times, local football never had a place among the splendour. On the contrary, it barely belonged.

Rewind to a Saturday afternoon in Harrogate five or 10 years ago and you would see a hundred or so natives shuffling along the stretch of tarmac leading up to Wetherby, squeezing through paint-chipped turnstiles to see part-time labourers wallop long balls over a sloping mud bank. Today, on a Tuesday night in 2018, nearly 2,500 noisy fans are packed into a state-of-the-art stadium to see an athletic, talented team pinging passes across the park in a top-of-the-table fifth-tier clash. 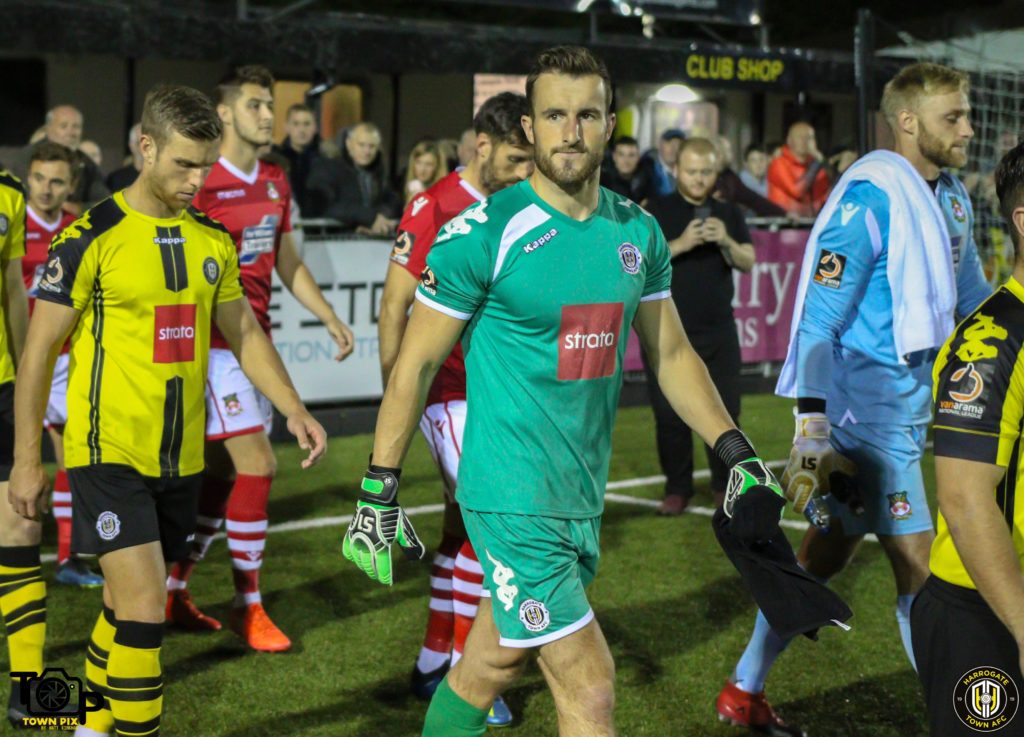 “Shortly after I arrived at the club, we got together and asked ourselves: ‘Does Harrogate actually know it’s got a football team?’,” managing director Garry Plant tells The Set Pieces. “We were averaging crowds of about 200 not long ago. Last year, during our promotion season, these numbers went up to 1,200. Now, we’re getting as many as 1,500 home fans coming to watch us.”

Alongside Plant, two members of the Weaver family currently occupy top seats in the Harrogate hierarchy, with chairman Irving and son Simon leading the club to its current position of third in the National League – their highest ever placing on the league ladder. But the new regime weren’t able to shake Town awake overnight. The team actually finished bottom of the Conference North in Simon’s first season as player-manager, only to be granted a  reprieve when Northwich Victoria failed to exit administration.

Irving took over the club in 2011, and following a marked improvement in results, attention soon turned to facilities as well as football. Roused into life by new stadium blueprints, the club stretched, yawned, and dressed itself for a higher finish, surging up the table and into the play-offs. In 2018 they beat Brackley Town 3-0 and were promoted to the National League, where they’re currently competing for top spot and automatic promotion to the Football League.

With growing numbers of replica shirts surfacing on the shiny new terraces, Harrogate is beginning to show its true colours. It’s always been a football town, Garry attests, but for many years locals weren’t connected to the club on their doorstep, often journeying out of town to take in a game in a nearby city instead. 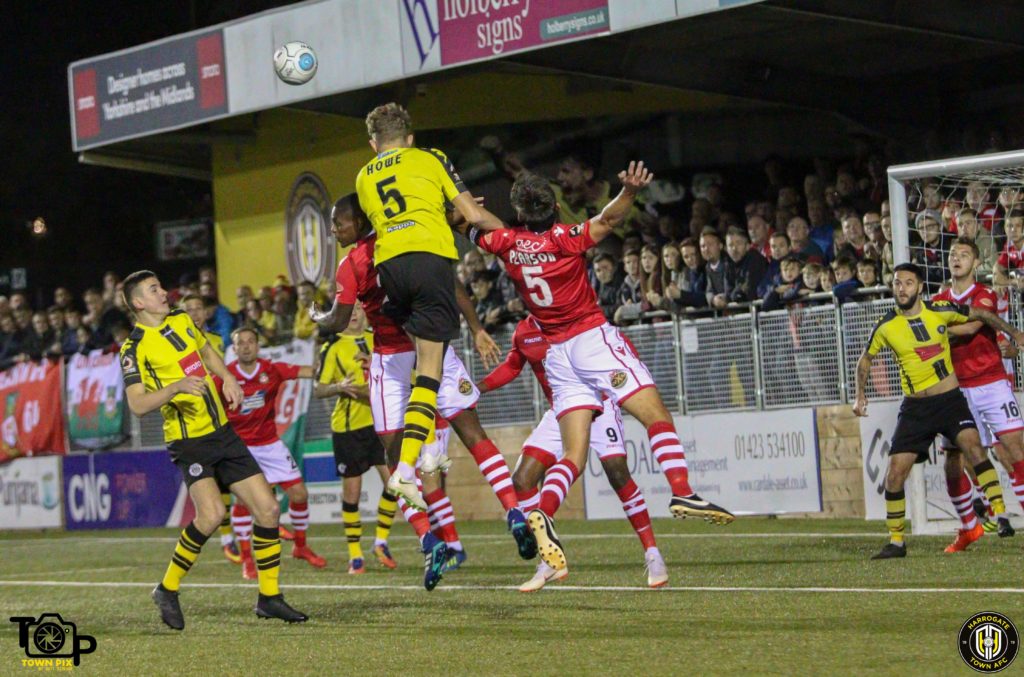 “Harrogate is a football town. It was just a case of making people aware that they had a proper club closer to home – not just Leeds or Bradford,” says Plant. “There’s been a tremendous amount of investment in infrastructure, but importantly there’s also been great investment in people – both footballers and non-footballers.

“When I first arrived at the club four years ago, the ground consisted of a car park, a bike shed and a pitch which resembled a sloping hill full of mud. Everything was really run down, and hardly any money had been spent at all. Only a few in the town were coming to watch us. Now, we’ve got a lovely structured ground, two new terraces, a corporate suite selling good beer, fantastic food on sale, and a superb 3G pitch.”

Sharing both the coat colours and characteristics of a summer bumblebee, this spa town club is visibly buzzing as it revels in the most exciting chapter in its history. Strategic funding has been a key ingredient in their magic formula for success, but the heads at Harrogate haven’t simply thrown money at the team and kept their fingers crossed. Rather, they’ve approached the climb up the football pyramid like an avid country trekker mountaineering the neighbouring Yorkshire Dales: step by step.

“We’ve grown because we have a fantastic group of people here all working together,” explains Garry. “Going full-time was one major decision that’s really helped us. The directors and manager collectively decided that we needed to have a young team who all wanted to be footballers and play as far up the pyramid as they possibly could. 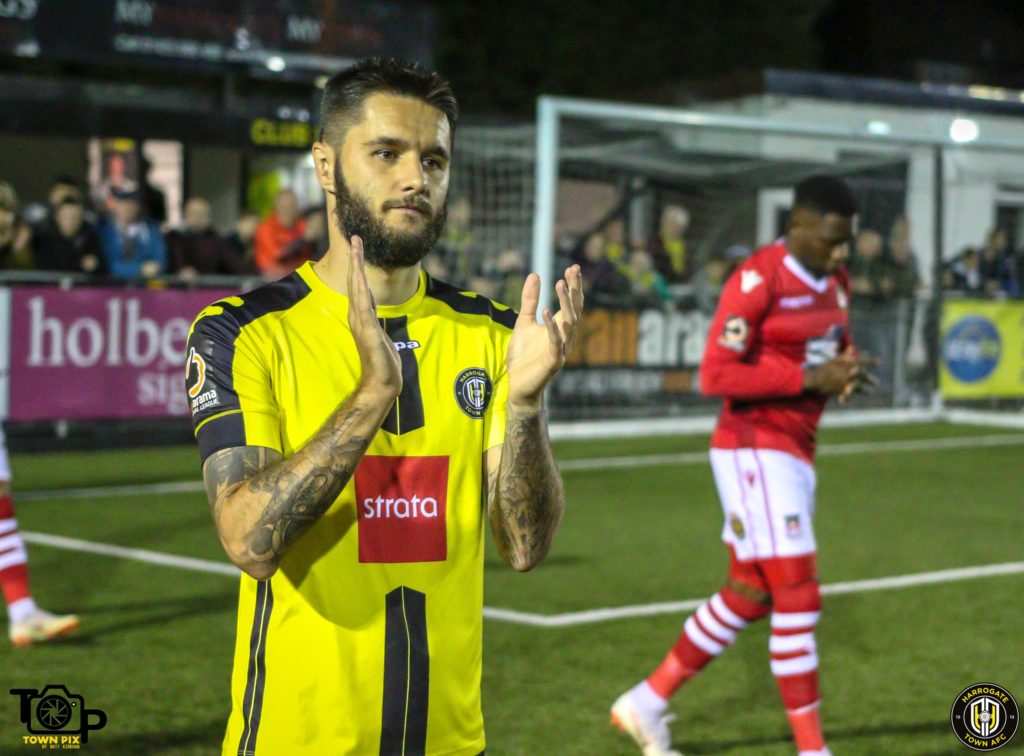 “We couldn’t have a group of players here who were on a building site during the day, arriving late to training, or heading up to somewhere like Barrow on a Tuesday evening and getting home at midnight to start work again at 6am the next day. Now, the average age of the squad is down overall – complemented by some experience.”

Before drawing up their first ever stack of full-time contracts, Harrogate elected to lay down artificial turf in 2016. Synthetic surfaces continue to divide football fans up and down the country, but most Town supporters are firmly in favour, with the 3G pitch playing an instrumental role in fusing that fundamental bond between the club and the wider community.

“It was a biblical decision to install the pitch,” explains Plant. “It’s grown the crowds, and now our stadium is busy seven days a week. We have schools, youth teams, walking football and a mental health programme using the facilities now. None of this would be taking place if we didn’t have a 3G pitch.”

The surface has certainly seen plenty of action at the CNG Stadium, and as the game ticks into added time with the score locked at 0-0, the opposition for the evening, Wrexham, visibly slow things down. The fact that the visitors – a club perennially pushing for promotion ever since they tumbled through the League Two trapdoor 10 years ago – are sitting back in the closing minutes tells its own story. They’re showing the hosts respect, knowing that a point here would be a good result. 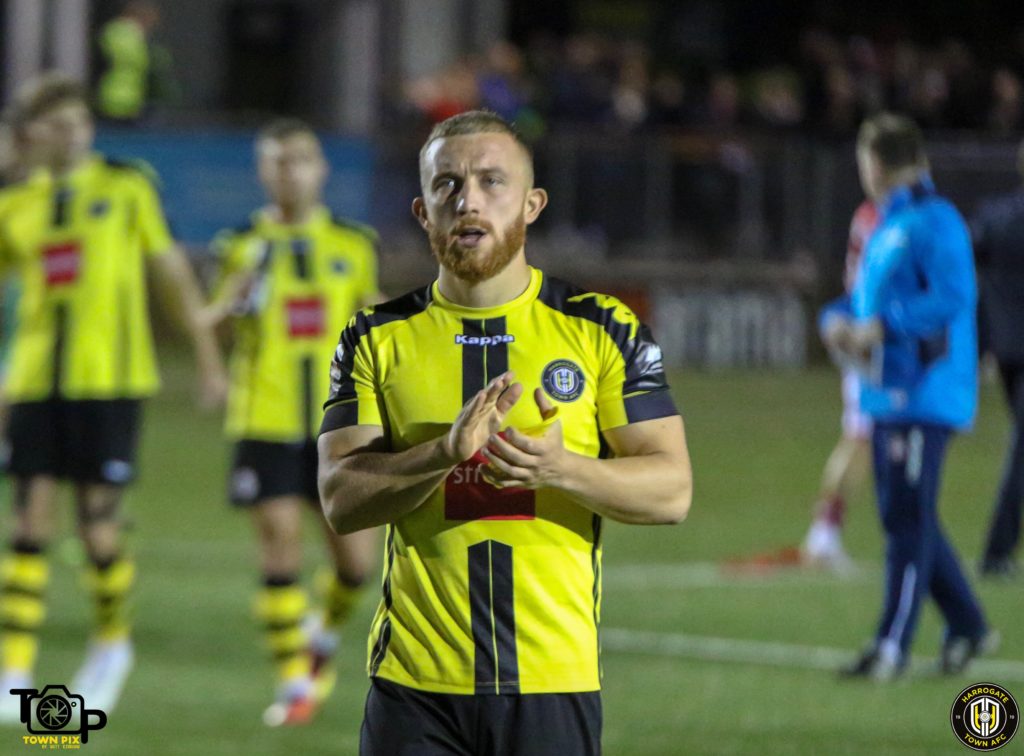 The whistle screeches to confirm the draw, but alongside the waft of Beef Wellington burgers floating in gently from the food bar, you can almost smell league football in the air. An afterthought among its denizens for so many years, Harrogate Town Football Club is finally stirring from its slumber. Watching it unfold is quite a sight, and Garry believes the rise can continue.

“We sat down with the club captain before the season began and asked: ‘What’s the aspiration for this year?’” he says. “Yeah, we could have settled for survival. But if you settle for just staying up and something goes wrong, you’re jiggered. Why not set the bar further up? We decided when we went into this season that we wanted to make the play-offs.

“We have a clear ethos here – we want to keep improving. We go into every game knowing we can win, and we take it step by step. Before each match we ask ourselves – what can we do to get points tonight?

“In the next few years we want to develop the ground further and achieve that main aspiration that the boardroom, players, staff and supporters all share: becoming a Football League club.”