Everyone who played Championship Manager in the early 2000s has a Cherno Samba story. He is one of the cult heroes on which the game’s reputation is built, instantly recalling childhood triumphs in the minds of thirty-something men.

Perhaps he led the line for your all-conquering Arsenal side, spearheaded a Champions League challenge with Rushden & Diamonds, or formed a formidable partnership with Maxim Tsigalko at Barcelona. Whatever the tale, the striker’s statistics guaranteed success.

The real Samba never reached the heights predicted in virtual reality, but the actual story is far more intriguing than any imagined career path. It is a journey of enormous early promise, missed opportunity, adventure overseas, and now, as he moves into coaching after retiring last year, a yearning to share his wealth of experience with young footballers trying to find a footing.

“I want to educate young players and help them with the pitfalls of the game,” says Samba. “I think I’m the perfect person to pass on those lessons.” 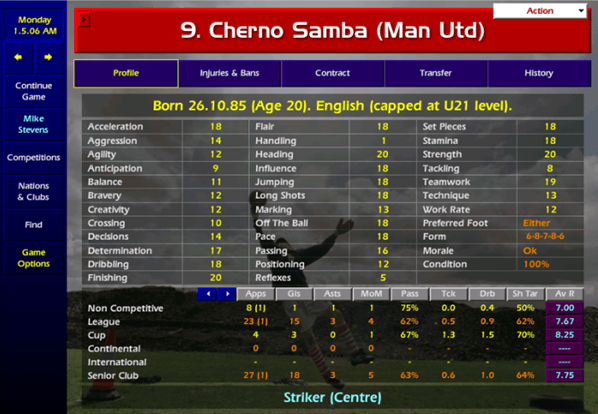 There are certainly few coaches who possess a greater understanding of what it’s like to be the next big thing. For Samba, the pressure and the hype during his teenage years were enormous.

After breaking Michael Owen’s schoolboy goalscoring record with 132 strikes in 32 games for St Joseph’s Academy – “It got to the point where the coach was like, ‘Right, no more goals from you’” – he was signed by Millwall as a 13-year-old.

A call-up to the England youth teams soon followed, where he progressed from the Under-15s through to the Under-20s alongside the likes of Wayne Rooney, David Bentley, Darren Bent and Glen Johnson. His fame on Championship Manager often preceded him.

“When it first came out everyone was going mad and telling me about it. Other footballers were saying to me how amazing I was in the game and they had to buy me.

“I remember David Bentley saying to me ‘Bloody hell, I can’t afford you. You need to lower your wage demands.’ I used to have a laugh with him about it.”

There was also an endorsement contract with Nike and countless promises from eager agents. Everyone wanted a piece of a player on the path to stardom.

“I was given vouchers to go to Nike Town in central London and I’d come out with four, five grand worth of stuff.

As the goals continued to flow, Samba’s name sporadically appeared on the back pages of national newspapers. Manchester United were the first Premier League club to be linked in late 1999. A few months later it was Liverpool, then Leeds, then Arsenal. The young striker visited all four clubs and quickly made up his mind where he wanted to continue his development.

“Even though I’m a United fan I ended up picking Liverpool. When I went there they made me feel wanted and I felt it would have been the perfect place to develop.”

Michael Owen was even in touch as part of the charm offensive. Samba received the England striker’s call surrounded by friends on the school bus.

“He called and said ‘Look this is the best place for you. We’ll look after you. It’s a great club for young kids and you’ll enjoy it.’ That sold the club to me and when I got there I wasn’t disappointed.”

But Samba was soon to face his greatest challenge as Liverpool and Millwall – who were demanding in excess of £2million for their talented prospect – failed to reach an agreement.

As a tribunal beckoned, the move fell through. Samba, then 14, was left distraught.

“At the time I didn’t deal with it very well. I actually stopped playing for six months after that because I was torn apart. Thankfully, my family supported me and encouraged me to go back.”

It is easy to understand how a 14-year-old might feel their dream had been destroyed. Now 30, Samba has a more philosophical outlook.

“At the time it was really hard to take, but I’ve got nothing against Millwall. It’s my club, I grew up there and these things are part of football.”

It is the sort of invaluable experience that could now save a promising career from going off the rails, and a perspective Samba aims to impart as a coach.

“When I was playing a lot of us didn’t get that support. It’s not just about ability and the game, it’s about life experience as well. A lot of people think it’s just about the 90 minutes, but it’s not. It’s how you structure your life. You’ve got to be disciplined.”

Samba’s desire to grow and learn more about himself and the game strengthened as his contract wound down at Millwall. Although he was still impressing for England’s junior teams – scoring in a European Under-17 Championship against Germany on home soil – his club career had stalled under Dennis Wise. It was time for a new challenge, a change of scenery.

“After not making the move to Liverpool, I was a bit down. So I just wanted to get out and be a new person again. Cadiz came in for me and I was really happy with that because I always watched Spanish football.

“I wanted to see a new culture, new football, a new environment and just become a man really. I was getting everything as an English youngster. If I knew then what I know now things would have been very different.”

Samba settled well in Spain, starting out in Cadiz’s development squad. But then an old injury flared up. A meniscus tear he suffered in England began to cause him difficulties and, as he recovered from an operation, the striker was loaned to Malaga’s B team.

Away from the spotlight and able to concentrate on his game, Samba enjoyed banging in the goals on Spain’s south coast: “That was probably the best part of my footballing career.”

With his pregnant wife suffering from homesickness, it was time to come home in 2006. Samba returned to England with Plymouth, where he would joke about his Championship Manager fame with another of the game’s legends, Bojan Djordjic.

He hoped to kick-start his career under Ian Holloway – “He made me feel very comfortable and confident in my ability” – but the manager’s departure to Leicester soon saw Samba on the move again.

“Playing abroad again appealed to me. I thought ‘I’ve done it anyway, why not do it again?’ It got to the stage where I was enjoying playing football abroad more than at home: the adventures, the culture, the different way of life.”

It was often in stark contrast to the luxuries he had experienced as a pampered youngster in England. From spending thousands of pounds in a single trip to Nike Town, he was now taking home his own kit to wash for the next game. Samba appreciated the importance of being grounded.

“Things can be very different abroad. I remember in Greece you had to take your own kit home to wash it, even though it was top level football.

“I understand why they did it, it humbles you. Here everything is done for you. You arrive for training and everything is neatly arranged. On the continent it’s a tougher life.”

After playing in Greece, Finland and Norway – as well as making his international debut for Gambia – injuries eventually caught up with Samba. A broken ankle at the start of 2015 signalled it was time to bring one chapter to a close and start the next.

FULL STATEMENT about my decision to retire from the Game! pic.twitter.com/rG9bwDWATO

He began his coaching badges last year and is working his way through the course at West Ham’s training ground.

“I’m really enjoying the coaching. It’s nice being on the other side. I can see the hassle I’d been giving the coaches as a youngster. I’ve learnt that you need to be confident in yourself, be understanding and have patience.

“I’m in the middle of my UEFA B Licence, then I’ll go to the A Licence. It’s not going to be easy, but that’s the same with life.”

Having struggled to fulfil his early promise, Samba now wants to turn the hardships of his own playing career into positives.

He has first-hand experience of being the hottest teenage prospect in England, and dealing with the fame and fortune that precipitates. He has faced devastating disappointment, fought back from injury, and learned from his adventures overseas.

The result is a wealth of knowledge and a measured perspective to guide young players along the right path: “Kids can learn from my story: what went wrong, what went right.”

There is also a book in the pipeline, which Samba admits has been a cathartic process.

“It felt like a release, to show ‘this is me’. I want people to know what I went through, what I’m doing now. There are some amazing stories. Some of it’s funny, some serious, some of it frightening.”

It promises to be much more compelling than any Football Manager fan fiction, although Samba still enjoys the memories. He hopes he might one day see his name on the game again – but this time as a coach.

“People still talk to me about the game, how well I played for them – or not. It’s nice to make people happy.

“I live and breathe football. It’s always been my passion and that’s why I’m doing my badges. It would be nice to see my name back on the game, but we’ll see what happens. You never know.”

What happens next for Championship Manager wonderkid Cherno Samba?
5 (99.01%) 81 votes