Outside the Riverside Stadium stand statues of a pair of Middlesbrough greats. Wilf Mannion and George Hardwick’s achievements are the stuff of legend, and rightly so, players whose greatness extended beyond Teeside and would have been even greater were it not for injuries and the Second World War.

One colossal figure from their history isn’t cast in bronze though, and it’s perhaps surprising that Boro have chosen not to honour the top-scorer in the club’s history, and the man who might have been recognised as one of the finest English centre-forwards of the 20th century, were it not for Dixie Dean.

Most fans will lament the singular talent of their club to make a mess of things, or for fate to intervene and snatch history, glory or just plain old success away from them. Boro’s version of that tale is George Camsell, the man who set the single-season scoring record in 1926/27, albeit in the Second Division, only for Dean to break it, by one goal, just a year later. 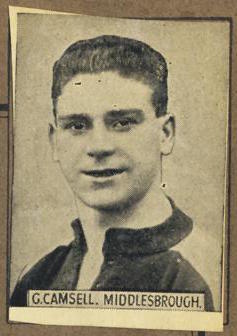 Camsell grew up in a north-east mining village in the early years of the last century, and according to Middlesbrough history book ‘The Boro Alphabet’ by Dave Allan, was spotted playing football in a pit-top kickabout as a teenager. He signed for Durham City, then in the Third Division, initially as a winger but was eventually converted to centre-forward and set about scoring goals aplenty, catching the attention of Middlesbrough in 1925 who paid £600 for his services – only, for fans of serendipity, after they had decided a price of £2,000 for Dean was too steep.

Camsell’s Boro career very nearly ended before it really began, the 22-year-old not settling at Ayresome Park after failing to dislodge starting striker Jimmy McClelland, and he started just four games in his first season, though he still managed three goals. He was transfer listed and a £300 fee agreed with Barnsley, but the Tykes couldn’t come up with the money and Camsell stayed where he was – which, specifically, was on the bench for the first four games of the 1926/27 season, making what came next even more remarkable.

That season began catastrophically for Boro, losing three and drawing one of their first four games, scoring just one goal in the process, so Camsell was given a chance for the fifth match of the season after an injury to McClelland. He drew a blank in that one, against Hull, but the following week at home to Bradford he got going with a brace, and from there it was a blizzard of goals.

He recorded his first hat-trick a few weeks later, which was the first of nine – that’s nine – that season, which remains a Football League record. Notts County were the unfortunate victims, but over the coming campaign Portsmouth, Fulham, Swansea Town, Manchester City, Port Vale, Grimsby, South Shields and Reading would be breached by Camsell at least thrice.

Indeed, of the 37 games he played, he only failed to find the net on eight occasions, and from the middle of October to January 1 he went on an extraordinary run of scoring in which he found the net in 12 consecutive games, an absurd streak that went: 1, 1, 1, 4, 1, 4, 1, 2, 4, 5, 2, 3 – 29 goals in total. The five was scored in a 5-3 win over City on Christmas Day, and it would appear that the author of the match report in local paper the Gazette was perhaps a touch disgruntled to be at Maine Road rather than tucking into some turkey, for he declared that Camsell ‘scored five goals but did little else.’ Quite what else he expected of a striker isn’t recorded.

And here’s the other remarkable thing: Camsell didn’t take penalties. Well, that’s not entirely true – he took three that season, scoring two, but after missing one against Millwall in the FA Cup in February, he refused to take another, either because of a fearful ribbing from his teammates or because he didn’t regard them as ‘proper’ goals, depending on which story you believe. Boro were awarded six more penalties that season, with a trio of players sharing the spoils – six goals that could have taken Camsell beyond anything Dean could have managed.

Camsell finished the season with 59 goals from 37 games, throwing in another four FA Cup strikes for good measure, and it wasn’t just that Camsell broke the previous record, but he absolutely obliterated it. The previous mark had been set by James Cookson of Chesterfield, who found the net 44 times in 38 Division Three North games the season before, a figure Camsell reached in February, after just 24 games. Camsell’s deadliness was such that, according to the Boro Alphabet, teammate Jackie Carr ‘was so confident Camsell would score that he would often squat down and watch after playing the ball through to his striker.’ John Arlott, the great cricket journalist who for a time covered football for the Guardian, wrote that Camsell ‘was not just a poacher, but a well-equipped footballer…red-headed, athletically built, buoyant, balanced and fast.’ In his ‘Hotbed of Soccer’, Arthur Appleton rather neatly wrote of Camsell that he ‘shot a lot, which was why he missed a lot and scored a lot.’

So remarkable were Camsell’s domestic scoring feats that his international record is virtually a footnote, but it’s nonetheless still extraordinary. He started only nine times for England (kept out of the side by that nuisance Dean again) but scored 18 goals, including four against Belgium and a hat-trick versus Wales, giving him the highest goals-to-game ratio of any England player with more than two caps.

Not everyone was a fan, though. Mannion, interviewed by Harry Pearson some years ago, said of Camsell: “I’ll tell you something about George Camsell – he was ruddy useless. He couldn’t trap a sack of cement.” When his goals tally was pointed out (Camsell ended his career with 345, putting him fifth on the all-time English rankings), Mannion merely said, dismissively: “Oh aye. He could score goals alright.”

There was, of course, more of a reason than Camsell’s simple brilliance for this remarkable season of goals, namely a change in the offside rule which reduced the number of players that had to be between attacker and goal from three to two. The Guardian noted in its appraisal of the season: ‘There is no doubt that (Boro winger Billy) Pease has so placed his centres generally diagonally that Camsell has been able to take them and seize his opportunity from positions which would not have been possible under the old regime….the diagonal centre to beat the backs and allow Camsell to remain in play and advance has been a great and a paying move.’

And then there was the fact that all of these goals were scored in the Second Division. Camsell helped Boro to an emphatic promotion, finishing top of the table by a clear eight points (when, remember, it was still two points for a win), but while the gap between the top two tiers of English football was nowhere near as great as it is now, his relative anonymity is partly explained by his greatest achievements coming at a lower level.

Of course, the primary reason for his airbrushing from history was Dean. In May the Guardian reported: ‘Middlesbrough finished their brilliant season by a one-goal victory at Swansea. This was scored by Camsell, who thus made his total 59 in 36 (sic) League games – a record that may stand for all time.’ In reality, it only stood for a year, as the great Dean beat the record by a single goal just a season later, in the First Division with Everton. After passing the total (with a remarkable run of nine goals in his last three games), Dean sent Camsell a consolatory telegram, noting that he had been given a watch commemorating his feat, and asked what gift his vanquished opponent had been given. “Nothing,” replied Camsell. “And rightly so.”

For one of football’s great nearly stories, his words almost seem appropriate.

With thanks to Harry Pearson, Steve Welsh and Anthony Vickers