Gary Mabbutt is one of a select group of players to be adored by two sets of fans. After making more than 500 appearances for Tottenham throughout the 1980s and 90s, he’s been revered in north London for decades.

Yet, it’s in the West Midlands where the 59-year-old achieved the ultimate accolade, with Coventry City’s fanzine named after him – or at least his knee. The former defender’s leg joint has gone down in folklore with Sky Blues fans after he diverted the winning goal of the 1987 FA Cup final into his own net.

All of that was still to come for Mabbutt when he did an interview for Shoot back in 1983. Back then, he was still relatively new on the Spurs scene and he didn’t have answer when asked what his biggest disappointment was. 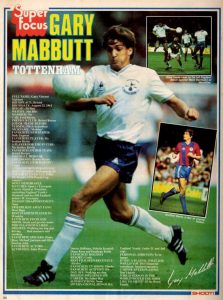 Thirty-seven years on and Mabbutt is much older and wiser, and as he revisits his answers from ’83 he reconsiders if things have changed for him much since he did the interview. One thing’s for sure, we’re pretty sure he’s no longer driving around in a Ford Sierra.