“I ordered 300 Pogba, 300 Ibrahimovic, 200 Mourinho and 100 each of Mkhitaryan and Bailly,” he says from his stand near the Manchester Ship canal.

“You don’t normally start the season with five new designs. Maybe one new one, and then another midway through the season.

“But Pogba has been massive. Ibrahimovic has been off the scale. The scarf manufacturers can’t produce them quickly enough.” 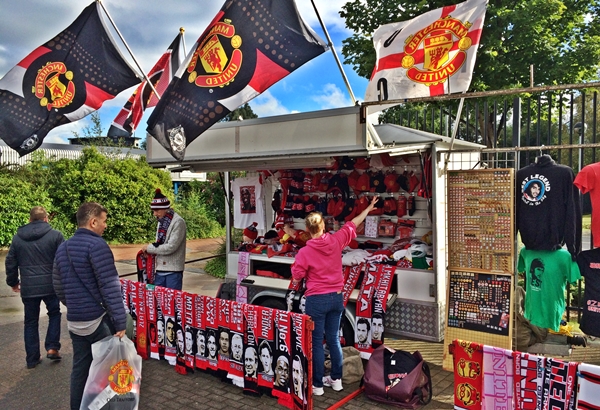 You used to know what you were getting – blocks of red, white and black with an illusion of insulation. But football scarves have changed.

Surrounded by an array of familiar faces and team colours,  Kevin carefully screws in a bulb to light up the garments on his stall.

Business is now riskier for both him and his customers. Not all United’s new signings will become the club legends of pre-season prophecy.

A different name – like Marcus Rashford last year – might gatecrash the party and force a swift reorder. Either way, as a player’s stock rises or falls, so Kevin’s stock sells or stays put.

The ultimate aim is to make sure scarves featuring the failed and out-of-favour end up in the back of fans’ wardrobes rather than the back of your van. But it’s inevitable that some will remain unsold.

“Every year I end up with a load of them that I can’t sell,” says Kevin ruefully.

“Angel Di Maria was a big hit for me. So was Carlos Tevez. He went from a big seller to nothing as soon as it was suggested he might be off to City.

Stall holders can write off some of their unwanted acrylic mountain against tax. That eases the financial problem – but there is still a practical one.

“I put all mine in those big clothes recycling bins,” says Kevin of his unwanted stock. It’s a solution that must inject a surreal note into a desperate situation somewhere.

Player scarves are disposable fashion, but compared the much-debated half-and-half products, they have the shelf life of powdered milk.

These one-day specials were born of rare European nights and distant affinities. But somehow they now mark local, regular enmity as well.

For some they represent the evil twin of the selfie stick, an accessory to an Insta-fan culture and the death of traditional support.

But for Phil, whose stall is just down the road from Kevin’s, the half-and-half scarf is simply “awesome”.

He was the first stallholder to bring the half-and-half to United, earning him the inventive nickname ‘Phil the Scarf’.

“It was the summer before the start of the 2005-06 season and I decided to try and do one for every game,” he says proudly, pausing to reel off a stream of prices to a potential customer.

“When they turned up, and the order included half-half scarves for the City game – our second home game that season – I thought that perhaps it wasn’t the best idea after all.

The most popular half-and-half of the season is for Liverpool’s trip to Old Trafford. The Manchester derby against City is second, so it should be a busy weekend for Phil.

They are not just for tourists either. Their popularity has blossomed in the void between the £75 price tag on an official Zlatan Ibrahimovic shirt and the daily wage within a hoofed clearance of Old Trafford.

“I have been doing this 19 years and we could not have done the match scarves to start with,” he says.

“It would not have been accepted. But there are more families now.

“People say middle class, but it is still a working man’s sport. My customers are people who have a season ticket rather than a family holiday. That is the culture.”

Phil and Kevin are part of that culture too. Some stalls, like Kevin’s, sold Jose Mourinho scarves last season while he was still manager at Chelsea.

Others, like Phil, chose not to, standing by Louis van Gaal despite the terminal speculation surrounding his tenure.

The discontented bought from Kevin.  Those uneasy at the public courting of Mourinho perhaps favoured Phil.

Scarf sellers and fans alike – veterans of the green and gold protest – maintained a civil relationship last season despite the division over the manager’s position.

The relationship between the club and the stall-holders, however, is more a matter for the civil courts.

Earlier this month Chelsea won the right to ban the word ‘Chelsea’ on the half-and-half scarves sold around Stamford Bridge. A letter to stallholders gave them three matches to clear old stock and redesign.

Manchester United long ago trademarked their name and crest. Therefore unofficial merchandise is stamped simply with ‘United’ and a litigation-defying mish-mash of the club badge and the City of Manchester coat of arms.

In previous years a member of the club’s licensing department used to tour the stalls, meeting the owners and checking the club’s copyright was not being infringed.

Now, with products to plug around the world, the club seem to turn a blind eye to the barnacle hitching a ride on their battlecruiser. Trafford Council’s Trading Standards – in uniform and plain clothes – are left to enforce the rules.

Across town there is another tactic in play. Manchester City’s sprawling Etihad Campus marks the territory around the stadium as out of bounds to anything except official merchandise.

Old Trafford sits on a smaller site but, even if it were possible, running the scarf-sellers out of town would not be worth the relative pocket money. Not when you have distant owners who pay themselves millions in dividends each year from the club’s income.

Not when Hotel Football – built next door and owned by the Class of ‘92 – sports its own spin-off of the Manchester United badge.

And not when the club’s American kit manufacturer taps into Manchester’s industrial past for its kit concepts.

Old Trafford was listed as an Asset of Community Value in 2013. Those who leave their stalls at kick-off to follow the match via a combination of car radio and nearby crowd noise are claiming a small crumb of that value in cash.

Phil is happy to keep the tradition going.

“Put it this way, Securicor doesn’t come to my stall to collect the takings,” he laughs.

“We are just here to make an honest living.”