Choose your future. Choose life. But why would I want to do a thing like that? I chose not to choose life: I chose something else. And the reasons? There are no reasons. Who needs reasons when you’ve got play-by-mail fantasy football?

It’s hard to imagine a time 20 years ago when we didn’t have our hands and eyes permanently glued to the internet and there was no Google to ask, “Why is Trainspotting called Trainspotting?” In Spring 1996, whilst the cool kids had a Sega Mega Drive and the really cool kids had the Playstation, a ZX Spectrum was embarrassingly still my favourite gaming toy. It was long before my first PC ushered in an era of Championship Manager, and I found myself flicking through the final pages of Match Magazine, chancing upon an advert for Pure Fantasy Football by M&E Sports – a play-by-mail football management game. Within a fortnight of posting off the tiny coupon, a bumper start-up pack arrived on my doormat and my life would never be the same again.

Although disappointed not to receive my first choice team of Blackburn Rovers, the chance to manage FC Aarhus of Denmark in the third division of the Western European League was clearly enticing, especially after reading of a promising 1-0 opening day victory over Ilves Tampere courtesy of a 74th minute Lars Lundkvist strike.

I was soon familiar with the star players of the small squad at my disposal: Polish defender Jacek Grembocki winning four consecutive man-of-the-match awards; Stig Tofting (or ‘The Lawnmower’), later of Bolton Wanderers in an alternative world, taking the holding midfield role known in the game as ‘stopper’; and aging target man Lundkvist linking up with goal machine Soren Andersen. 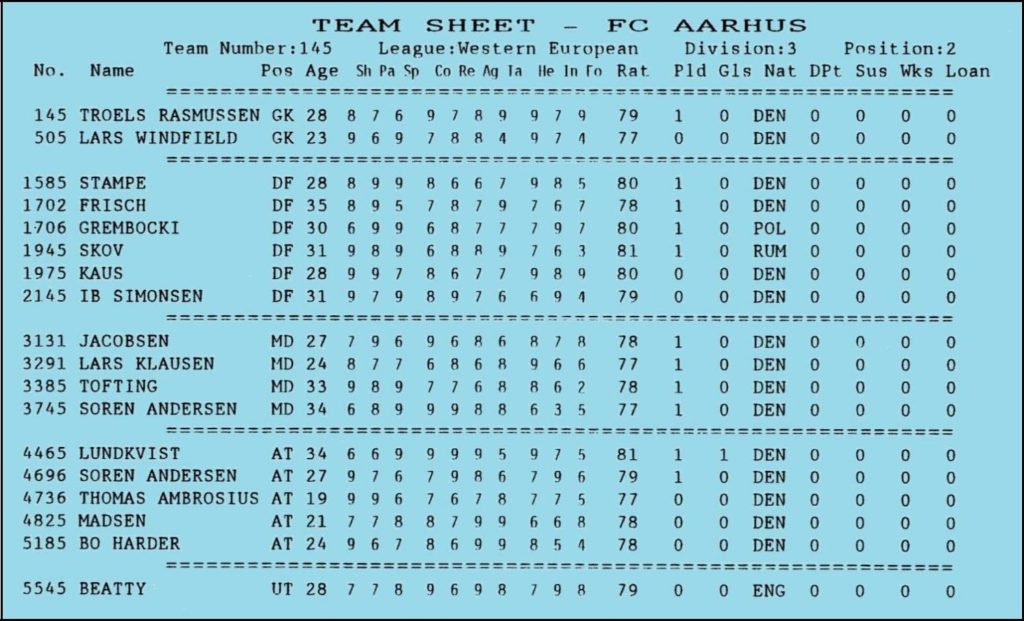 My thirty-minute bus journey to school in the morning would invariably be spent sifting through reams of match reports, statistics and the latest transfer list – cue the older kids repeatedly dismissing my enthusiasm: “Why don’t you do a real fantasy football?” Yet this was more authentic than picking a concocted team of 11 men for under £40m in August and calling them Paralympique Marseille or Borussia Mönchenflapjack.

Suddenly I was the manager of a real football team and there was nothing fantasy about it – I was an aspiring Harry Redknapp, thrashing out deals on the telephone with other play-by-mail managers (after asking for my parents’ permission, of course) for St Johnstone’s Paul Wright, Paris Saint-Germain’s Xavier Gravelaine and even attracting Gica Popescu from Barcelona.

This was serious stuff. I had friends as assistant managers, created a club newsletter and sampled KC and the Sunshine Band on “That’s the Way (Aarhus Aarhus I Like It)”.

Filling out the ‘turnsheet’ with crucial managerial decisions became a ritual, followed by sellotaping two pound coins to the sheet, stealing a stamp from my parents and penning the envelope with the Chesterfield address which I can remember to this day. Then there was the nervous excitement of waiting for the post to arrive (and occasionally getting angry at the postman for not delivering when expected) before reading through match reports line by line whilst keeping the final score hidden.

After a bright start to the season, including a famous League Cup scalp against first division Anderlecht and a 5-5 thriller with IFK Gothenburg in the following round, a mid-season lull dropped us to 8th in the 12 team division. But, with ever-improving ability in how to play the game, eight consecutive victories saw FC Aarhus take promotion – and the league title – on the final day of the season. 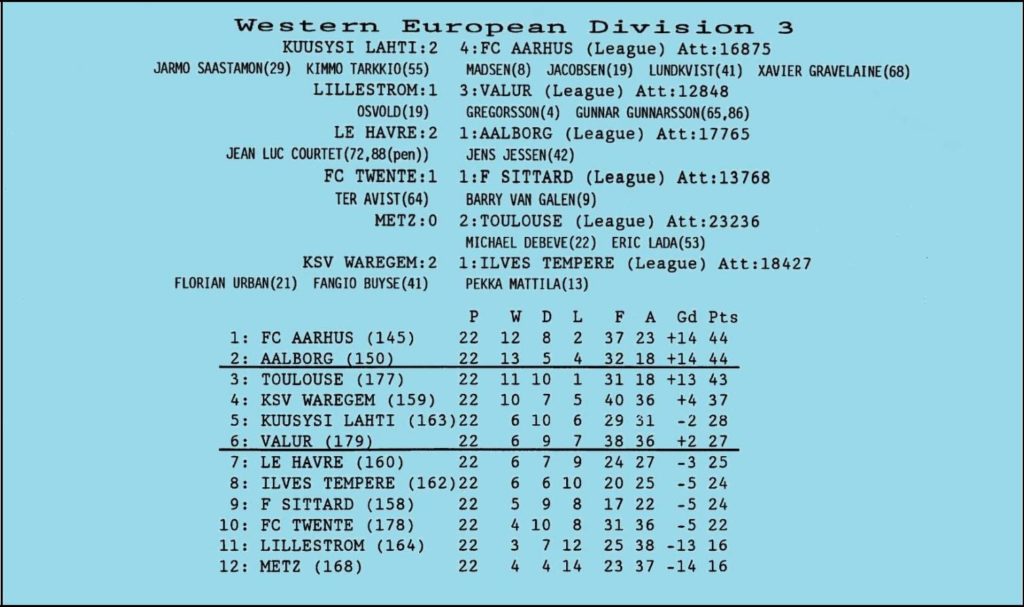 The following season, a second successive promotion and penalty shootout heartbreak in the cup final to old rivals Anderlecht signalled the termination of this particular game version, as new and old members’ interest waned due to outdated squads and the number of ‘super teams’ now in existence.

Despite the arrival of Championship Manager, my addiction to play-by-mail didn’t falter and there were instances of sending off multiple application forms just to see the quality of the rival games available. A short stint at Bury (Extra Time by KJC Games) was memorable for David Pugh’s double-hat-trick in a 6-0 rout of Manchester City, before the biggest names in European football were calling for my experience. The zenith of my career at Ajax Amsterdam (Championship League) was where I finally won some significant silverware with a league and cup double.

It’s been such a big part of my life that, as far as I’m concerned, it deserves to be slipped onto my CV alongside managing Brighton & Hove Albion to Cup Winners’ Cup glory on Championship Manager 2. Alas, I’m in dreamland. And every high brings a low. The comedown from those play-by-mail glory days would herald the internet revolution and the impending arrival of my adulthood as the new millennium started. The days of rushing to a pillar box before last post were long gone.

The play-by-mail markets would shift with the times and allow play-by-email alternatives, whilst maintaining that essential characteristic of competing against real people and teams. A present-day Google search remarkably shows a diehard community still playing regularly, but regrettably Pure Fantasy Football ceased trading in late 2015. The embers on the message board point addicts to Ultimate Europe by William Elliot Sports Ltd, one of a small handful of games still operating and which thankfully still offers a mail option for the aficionados.

It’s to a large degree of relief that the last rites of play-by-mail have not yet been read, but the cynic in me suggests today’s kids being blitzed by technology will eventually sound its demise. It is dependent on nostalgic geeks like myself to keep the flickers of hope burning; and having revisited my indispensable records from the 90s, the temptation is definitely still there to come out of retirement for another hit. Or is it time to choose leisure wear and matching luggage? Nah, it’s 2016. Trainspotting 2 is coming out and it can only mean one thing. I’m going in again. I’m gonna get high on another play-by-mail season.