How best to run a football club? With big spending? With youth development? Making it up as you go along? Unless you have hundreds of millions of pounds, you’ll never have the chance to put your ideas into practice. But with Football Manager becoming more realistic and more immersive every year, perhaps the game could be used as the framework for a theoretical experiment. We asked Alex Stewart to take over a club and guide it for five seasons with a strict adherence to the ideals of Moneyball.

In Part One, Alex took over impoverished Bristol City and promptly set about laying waste to League One. A combination of shrewd backroom appointments and a devastatingly effective 5-3-2 formation saw the Robins cruise to the title and secure promotion to the Championship. But how well would that work at a higher level?

In my first season with Bristol City,  I instituted a series of rules inspired by a thoughtful approach to transfer policy and recruitment. That, allied to in-game management, took me to the waiting room ofthe promised land, also known as the Championship. As the previous piece showed, the first season is less about recruitment and more about building a platform for successive seasons, as well as working out a tactical set-up that offers sound defence and making the most of what you’ve got in a squad. But now we are in the hardest league from which to win promotion™ and so buying players is a must.

I will be using the rules to guide me and keeping financial prudence, a necessity for a little club like Bristol City, uppermost in mind. 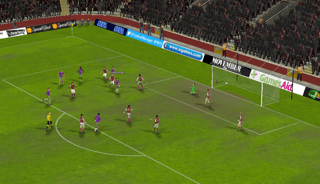 And so, the second season begins with recruitment. As the superb The Numbers Game suggests, I need to ask myself where are we weakest? Statistically, almost 35% of the goals we conceded were down RWB Mark Little’s side so, even though he was in the team of the year, he is a weakness. Central midfield is too:although all my front three and back three averaged over 7, none of my midfielders or wingbacks got close.

As a reward for my stellar performance last season, even if I do say so myself, I am given a new contract until 2017 and £1.59 million in transfer funds, as well as a bump in wages that means I now have £47k per week available. The trick in recruitment is to look at who has played well consistently over the course of last season in positions where your team is weak and to hold off until bigger clubs release players, rather than plunging straight in. I also intend to keep to my tactical set-up from the first season and so look for players that will either slot into it straight away, or can be developed to fit it. If, say, a really exciting winger became available, I would ignore them because I have no need for a player in that position. Keep to what you need, in terms of replacing weak links and maintaining tactical integrity, and you will be a lot less likely to waste your money.

I am looking for at least one midfielder and a RWB, plus possibly a striker if a good one comes along on a free. I sign Joe Rothwell, released from Manchester United, for £1.7 per week on a free, to add creativity and potential to the midfield. I also sign Shaquille Coulthirst, a striker released by Spurs, again on a free, for £3.7k per week. For a total of £600k, I buy Filip Kiss from Cardiff, paying £11k per week. He had averaged over 7 for Ross County last season and has great potential, looking especially strong as a box-to-box type of player. I purchase transfer-listed right wing-back Marco Sangalli from Real Sociedad for£250k and £4.7k per week to challenge Mark Little. I also secure transfer-listed Simone Corazza from Sampdoria for £400k and £5k per week. Lastly, I sign Andrea Romana, a ball-winning midfielder from Inter Milan. He cost £250k all in, and £3.7k per week in wages. Having looked at Romana’s stats, it is clear that heprovides excellent back-up for the ball-winning role, but, with pace and crossing ability too, can be moulded into a back-up right wing-back in case Sangalli doesn’t work out or gets injured.

I have been able to compensate for my team’s weaker areas while not upsetting its balance and all my signings have a proven record of playing and are in the 20-25 age bracket, which allows for development and sale onwards later. Each player is scouted numerous times or offered a trial if they are out of contract. I am looking for high potential ratings, a good mentality, and, ideally, average ratings of around 7.0 in the previous season. All of my signings meet these criteria.

In terms of sales, I puzzlingly only receive two offers: Chesterfield, also promoted, try to take Kieran Agard off my hands but he refuses to sign for them on the basis they will not pay him enough; I also receive a £500,000 offer from Nottingham Forest for a sixteen year old goalkeeper Dan Burns which I happily take, as does he. They are obviously not reading my rules.

In terms of strengthening the club more generally, I ask for, and receive, additional members of the coaching team: Albert Yague, a 30-year-old Spaniard with high ratings for attack, Ray Wilkins, and Mark Robins come for a combined £3200 per week. I also add scout Mike McGlynn for £1200 per week. The importance of a solid backroom team should never be underestimated and scouts are especially important, given the emphasis placed on the wisdom of crowds in my recruitment policy.

That is a lot of outlay, but to challenge effectively in the Championship, I had to strengthen. The season is gruelling in its length, the number of fixtures draining in terms of injuries and fitness. I cannot afford a Mourinho-esque approach of having two first team level players in each position, but there is sufficient depth due to training players for new positions to cover for all but the worst eventuality.

So, how did it go? It went well. In fact, it went very well. Bristol City, newly promoted, plucky underdog Bristol City, mostly skint and tipped for relegation Bristol City, only go and win the bloody Championship. 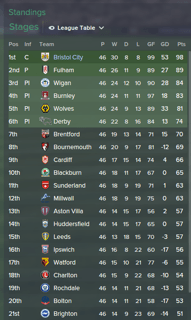 The season opens with a 4-1 hammering away at Rochdale, and my heart sinks. But we then go on a sixteen game unbeaten run, ended only by a thrilling 4-3 reverse away at Charlton. Our final five games result in five wins, scoring eleven and conceding none, as Frank Fielding once again excels between the posts.

The margin of victory is not nearly as convincing as it was in League 1, 98 points to Fulham’s 89 and a goal difference, 99, that is better than fourth place Burnley’s by only two. But winning a second consecutive promotion is an immense achievement. I also manage to beat Manchester City 2-1 away in the FA Cup, only to be dumped out in the fourth round by, of all teams, Kidderminster.

We play exciting, attacking football exactly as we did the previous season and, once again, I do not have to fall back on a second tactical set-up at any point.

Of course, for a save like this, the acid test is how do my signings fare? Corazza, discarded by Serie A’s Sampdoria, nets 28 goals in 42 games, averaging 7.29 and increasing in value to £3.8 million. Kiss averages 6.97 in 38 games, certainly an improvement on my other midfielders, and Coulthirst does well as a sub, scoring 7 and getting 7 assists. Apparently he’s the next Michael Owen, so that bodes well for his future in television commercials. Sangalli tightens up the right-hand side and while averaging a less-than-glorious 6.89, increases in value from the snippy £235k I paid for him to £3.3 million. Romana is a slight disappointment, averaging 6.78, but he is used in a variety of positions and his stats improve heavily. Rothwell is loaned out all season to Oxford and gets slightly narked about that, but his exposure to first team football means he returns to the fold with considerably better stats. The main thrust of the policy is to strengthen the areas that are weakest and, in Kiss and Sangalli, I have achieved that. I have also added young players like Coulthirst who can challenge for first team places and be ready to step up if I receive offers I have to accept for players like Burns or Emmanuel-Thomas.

This strength in depth also means that, in a tough, congested league format like the Championship, I can employ a degree of rotation without suffering in terms of results, expose some of my younger players to first team football, and manage the injury load better. It really works.

The development of my players is another success story. Luke Freeman is again player of the season – he is a really superb Championship level attacking midfielder and 15 goals and 26 assists at 7.50 tell their own story. Luke Aying, the right-back turned centre-back is also hugely impressive and his stats are nicely on an upward curve. The team has a spine of experienced players who came up with us in the first season, augmented with a sprinkling of new, younger talent.

And so the promised land awaits. The Premier League. The big bucks. How will the minnows of Bristol City do and how will Moneyball stack up when we finally have some actual money to spend?

You can find out by clicking here for part three.

And there’s a fifth instalment as well.

And here’s part six, if you’re still hungry. And part seven and part eight too.

Do you legitimise your addiction to Football Manager by contriving enormous thought experiments? Do you do the same with other games? Have you ever used Minecraft to assess the load bearing capabilities of pumpkins? Email [email protected] now or click this.