Well, this is a bizarre feeling. The emotion. The pain. The excitement. The elation. The despair. The end. At long last, we have a winner. Over 100 of you were entered, and the two who would remain were Jake Seviour of Dundee United and Joe Krishnan of FC Utrecht. Would it be Scottish supremacy or Dutch delight? Find out below.

Their progression through the tournament has seen a wonderful relationship blossom between manager Joe Krishnan, and our friends at @FCUtrecht. Since day one, they’ve shared the highs and the lows over Twitter, but what started off as a bit of fun in the beginning turned into something much more than that. There was a trophy on the line. And they both wanted it bad.

Constantly impressing with their attacking style of football, Utrecht’s route to the final looked a little something like this:

Round 1: Bye
Round 2: Defeated Helmond Sport via forfeit
Round 3: 4-2 vs Ulsan Hyundai FC (after extra time)
Round 4: 4-0 vs Houston Dynamo
Quarter Final: 4-1 vs ESTAC Troyes
Semi Final: 3-2 vs PEC Zwolle (after extra time)

Something you may find interesting is that, despite playing the fewest matches out of the final four teams, they scored the most goals. Four goals against Ulsan Hyundai, four against Houston Dynamo, another four against ESTAC Troyes and three in that thrilling semi final against PEC Zwolle. Freezing up in front of goal? Pssh. They may as well have been sitting on a beach with their sunglasses on and a cocktail in hand.

On they went, progressing round after round, the belief growing amongst the Utrecht faithful. One final message of good will on Twitter, and then it was all down to Krishnan and his squad to complete the job. But could they go that one step further and bring back the trophy to the Stadion Galgenwaard?

@joekrishnan @thesetpieces We're counting on you and have your back! 🙂

Nobody can quite believe that they’re here, but they’re here all right. Going into the the quarter finals, Dundee United were statistically the worst team left in the competition and yet they have defied all of the odds to make it to the final. No fuss, no complaining, just a lot of hard work and unity which clearly paid off. Manager Jake Seviour and his men in orange deserve immense credit for their contribution throughout the competition, and they have certainly gained some new fans along the way.

Dundee United’s route to the final was far from straight forward, and here’s how it happened:

In contrast to their free scoring final opponents Utrecht, Dundee United never did things the easy way. After an automatic progression in the first round, they were victorious in 90 minutes only once out of their next five fixtures, scraping past AS Nancy via the means of a single goal. They needed extra time to progress against Albacete and Real Salt Lake, not to mention going the distance and winning on penalties against both Motherwell in the second round and FC Seoul in the semi final. Fatigue could take its toll, but if we’ve learnt anything about this Dundee United side, it’s that they don’t go down without a fight.

While they’ve surprised many in getting here, they won’t just make up the numbers. They want to bring that gorgeous trophy to Scotland and to have it sit proudly in the trophy cabinet at Tannadice Park. Can they do it? Why not? You’d be a fool to rule them out at this stage.

Just over 30,000 were in attendance at the interestingly named Wankdorf Stadion in Bern, Switzerland to watch this tasty tie. It was a warm August day, and you could cut the tension in the air with a knife. The anxiety was ripe, and you could have created a butterfly farm with all of the panicking stomachs in the stands. Nobody likes a final.

They did it! Dundee United have won The Set Pieces’ Football Manager Cup. Unbelievable.

“Going into the final, I was feeling confident” said Krishnan. “My boys had dispatched a number of tough teams en route, with the likes of Ulsan Hyundai and fellow Eredivisie outfit PEC Zwolle taking us to extra-time. But when it came down to scoring goals, I never doubted the attacking talent my team possessed.”

As we alluded to earlier, goalscoring was never a problem for the Dutch side. Krishnan was keen to talk up his attacking talent, with Ruud Boymans and Edouard Duplan receiving considerable praise.

Seviour was quite the opposite heading into the match, saying,  “Before the game I didn’t even think I had a chance after seeing Joe’s results.” Football is strange.

“Dundee United were a different test.” said the Utrecht boss as he reminisced about what might have been. “They came out of the blocks quickly and had all the early chances. Robin Ruiters was keeping me in the game with save after save, and my usually reliable midfield pairing of Yassin Ayoub and Tim Janssen were struggling to control the game.”

It wasn’t looking good for Krishnan & co, as their usual game had deserted them. Dundee United on the other hand had abandoned their structured, solid style of football and attacked, attacked and attacked again. A refreshing approach to a fixture with so much at stake from a team who were clearly enjoying themselves.

Utrecht were struggling at the back, and Krishnan took no prisoners when analysing his team’s defensive work. “When you defend like we did for their goal, you don’t deserve to win a final” he said bluntly. “Van der Maarel had failed to clear and Dundee United pounced on his mistake to take the lead. I’d never gone 72 minutes without scoring, so this was new territory for me. How do you recover from that?” It was clear that Dundee United had not only an edge in the scoreline, but a mental advantage over a side who are used to having it all their own way.

Utrecht were desperate. “I switched to a 4-1-3-2 formation and changed the team’s mentality to ‘Overload’, as well as opting for a more direct style of play. After that, we looked better – we were closing down the space, retained possession and had a couple of half chances.”

Would these drastic changes help to alter their fortunes with so little time left?

“Haller had a great opportunity to score, but their keeper made a wonderful save – and from the resulting corner, Leeuwin’s header was cleared off the line. Sometimes, you just know it’s not your day. You need a bit of luck to see you through.”

Heartbreak for Utrecht. Despite the crushing defeat, Krishnan and his men were graceful in defeat and congratulated their opposition at full time. “Dundee United had that today, but congratulations to Jake. I told him he and his team deserved it, we didn’t do enough to win.”

Seviour’s heart rate was reaching abnormal levels in those final few minutes, as he embarked on an emotional rollercoaster he could never have experienced before.

“The game was very even and Joe came close to equalising several times in the last few minutes. I was sure he was going to score and that I would lose in extra time.”

They managed to hold off the late onslaught to win the tournament. Man of the Match Calum Butcher stood alongside captain Sean Dillon as he lifted the trophy, and this Dundee United side will surely go down in history. Huge congratulations are due here, after a victory that nobody thought would ever be possible. 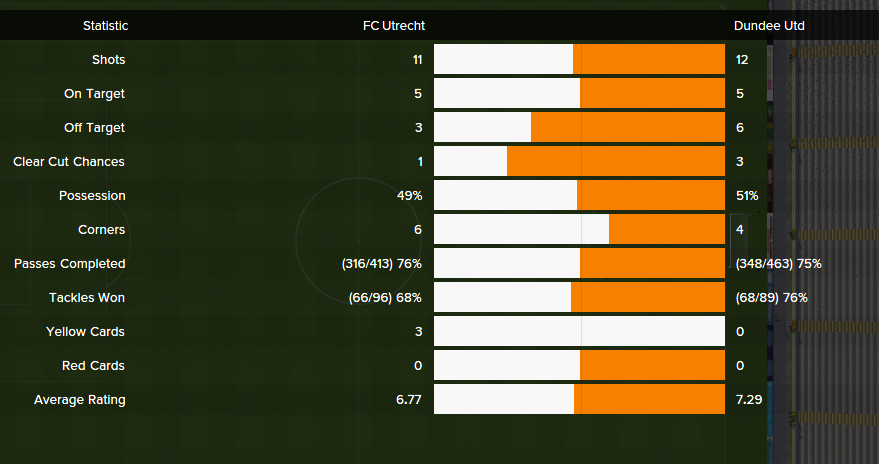 As you can see, this was a closely contested affair with little separating the two sides. Fouls, possession, shots on and off target were just about separable, but the Scots were just that bit better in front of goal.

All was not lost for Krishnan, who now has a friend for life in @FCUtrecht.

“I can take many positives from this. Utrecht (my new love) have offered me two VIP tickets and some club kit when I go over there, and out of the 128 who entered, I finished second. I’ll be back in some shape or form in the not too distant future, and from there we’ll try again for the elusive Set Pieces FM trophy.”

We love you Joe, and we love you FC Utrecht. Go send them some love on Twitter if you can.

@joekrishnan If you pay us a visit, we'll hook you up with 2 VIP-tickets and some nice clothing. Just let us know when you come over! 🙂

So there you have it. Dundee United are the winners of The Set Pieces’ Football Manager Cup. Our thanks go to all of our competitors, but especially to Henry Charnock at Sports Interactive, without whom we could never have completed so grand a project.

Did you enjoy the Football Manager Cup? Would you like to see another one? In this format or a different format? Or is this just silly? Would you prefer us to launch some kind of enormous ‘Civilization: Beyond Earth’ tournament? We could do that. Oh, you just watch us do that. Write to us: [email protected]