The first round sorted the wheat from the chaff. Out went the easily intimidated: the no-shows; the oath-breakers and the ones who signed up without realising that you actually needed a copy of Football Manager in order to play. This is the second round. This is where 64 became 32. This is where it really got interesting.

We asked for your screenshots, your videos and your tactical breakdowns. We forgot to provide any of our own. But at least we’ll have another chance to set some kind of example of creativity as our side Excelsior ploughed through poor Grant Daglish’s Kilmarnock like a runaway juggernaut through a house made of biscuits. The question of whether or not it is acceptable to arrange a tournament, sponsor the trophy and then enter your own team will hang over the competition as long as Excelsior remain in contention. But only God can judge us. 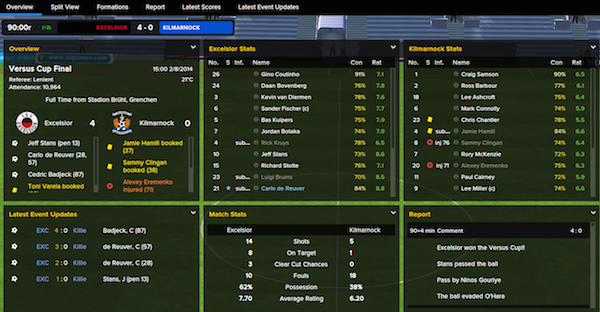 PEC ZWOLLE 4-3 AS ARLES-AVIGNON
Nicholas Dutton is in our good books. Not only did he send a video of his game, but he appointed a director of communications, the excellent Martin Lloyd, who put together this magnificent match report.

“The decisive moment came deep in stoppage time,” Lloyd writes. “The were scores level at 3-3 and enough drama had already been served to up to fill a degree course syllabus on Harold Pinter.

A poor Avignon clearance was recovered through the spin-cycle of the perpetually mobile Zwolle midfield and pushed up to target man Tomas Necid who stood heroically upright with his back to goal. A sly ball was plopped around the corner, falling just short of the defender and into the path of substitute Jody Lukoki.

Jody gathered it and then he was ready. Jody had always been ready. Jody was born ready. Skipping onto his left foot he circumnavigated the full back, displayed the poise of a ballerina and then charged into the box with the power of a hundred energizer bunnies. Now 12 yards out and with the shape of the keeper expanding to fill the goal ahead of him, Jody sensed his moment. Destiny was calling and you don’t dare let that number go through to voicemail. Drawing his right foot back behind the ball he pushed it through and…

…fell to the turf. Had he been felled by the close attentions of centre half Pintreaux? Had his foot pounded into the pitch like a misaligned Russia satellite returning to earth with great prejudice? Had some passing lonesome spirit simply decided that it was a prime opportunity for mischief? The 6,000 strong crowd gathered in the Tórsvøllur stadium held its collective breath as the fastidious referee slowly raised his whistle to his lips – and then his finger to the spot.

‘What followed was a formality; Czech international Necid dispatching the penalty with a waft of his peg as if it were merely an inconvenience at the end of his lackadaisical run up. There was barely time thereafter for the game to be restarted, for the customary time wasting substitution which saw man-of-the-match Jesper Drost replaced by Stef Nijland and for the occasion to come to a tumultuous finish. Through hazy, tear stained eyes we saw the majestic sight of the blue and white hooped shirts charging towards their bench, arms lofted high with voices exhaling the footballing god who had chosen to smile on them that day. The Miracle of the Faroes was complete. The Sky Sports News yellow bar of breaking news would run and run all night, flowing across European television screens like the endless streams of Advocaat being poured in bars from Frankhuis to Ittersum. June 25th, 2015 would go down in the history of Der Blauwvingers as one of their greatest days. The final score; PEC Zwolle of the Netherlands FOUR, AS Arles-Avignon of France, THREE.”

We like FM Tensai too. Not content with just telling us how he did, he’s written a blog detailing his exploits on a round-by-round basis. He makes this all so much easier. We’re not even sure if it’s possible to fix this competition, but if it was, we’d fix it to keep him in for as long as possible.

Fortunately, we don’t need to fix anything. His Toronto side made short work of Caen, as you’ll see by checking out his site. 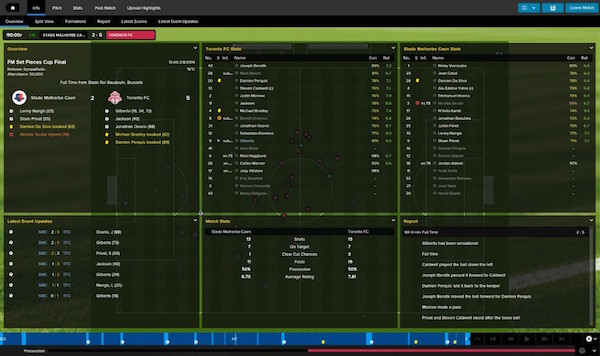 Alexander Partridge is through to the third round too. And if you want to see highlights of his game, you can see them over here. But for a match report, let’s see what the man himself made of it all.

“It started with a penalty after my speed demon fullback got hauled down in the box,” said Partridge afterwards. “Fortunately for the Sounders, I had remembered to set my penalty takers. Pineda stepped up and slammed it top bin, the keeper didn’t have a chance. This was it now, I thought. We got the important first goal…unfortunately FM had other ideas. Mr Salak’s team won a free kick inside the half way line, I was confident that my boys would have enough to see the ball to safety, but Clint Dempsey had a momentary brain fart before absolutely slamming a header into the top corner of his own net, his own net!”

“At 1-1 the boys were massively under the cosh, the pressure was starting to show. It wasn’t until we managed to injure the oppositions best defender and midfielder that we started to take control. Dempsey, clearly feeling like a bit of a tool after his previous misdemeanours took the ball into the oppositions box, played it short to Evans who rolled passed again before…BOOM! Goal! We were back in front.

Obafemi Martins was annoying me, he wasn’t producing his best Newcastle form and was playing at the pitiful 6.2 standard. I decided that his pace and acceleration would see him shifted out the AMR in order to really get behind FC Nordsjelland, it worked. As soon as he made the switch we cut them in two, pulverising both full backs. We finished the game scoring another two goals  and making the win look much more comfortable than it looked.

After the game the boys and I sat down to talk through the result, Martins told me that he was very sorry that he let the big game get to him and that although he’s unaccustomed to the right, he will endeavour to perform for me there in the next game. Dempsey is still red faced, I believe that Gonzales whipped him on the buttocks with a wet towel as he laughed about how silly Clint had been. We had hot chocolate on the bus home and I think I even saw Tyrone Mears face timing his Mummy. She’s still cross with him for that time he tried to get a move to France whilst still contracted to Derby. We eagerly await the next round.” 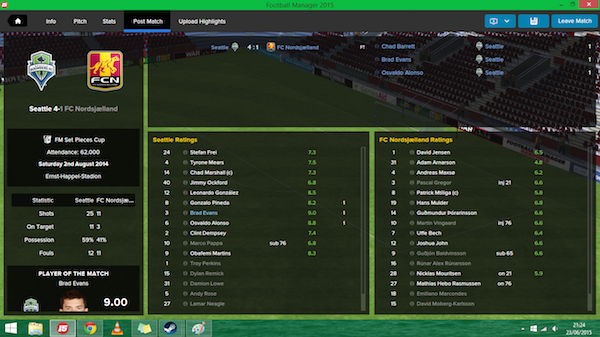 There’s no messing around with generic screengrabs from Davey Blackett. He was so impressed with his Incehon side’s performance that he went to the effort of knocking up a souvenir poster. That’s the sort of thing with which we will happily get onboard.

“I did make a video as well,” said Blackett, “but something went wrong and it looks like a poltergeists sex tape. Instead, I made this poster of Lee Choo-Soo on it because I love him now and if you’d seen the free kick he scored in the 21st minute you’d love him too.”

Poor Alex Sparasci must have thought he was going through when his team opened the scoring. Well, we know that he did. He told us.

No, not at all. Thank *you*, Alex. And Davey, because this is class. 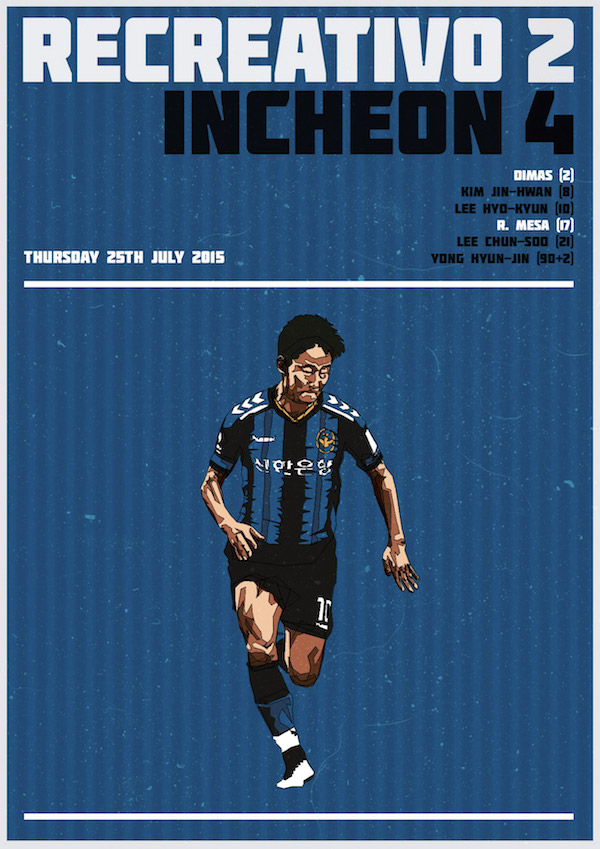 NEC boss Josh Wignall’s luck finally ran out. Having survived unscathed when he was reduced to nine men in the first round, he was eliminated with ten men in the second.

“One goal proved crucial as a second injury of the game left NEC down to ten men with no substitutions remaining,” he muttered. “Despite their best efforts, almost immediately hitting the post when play restarted, the brave Dutchmen fell at the second hurdle.” 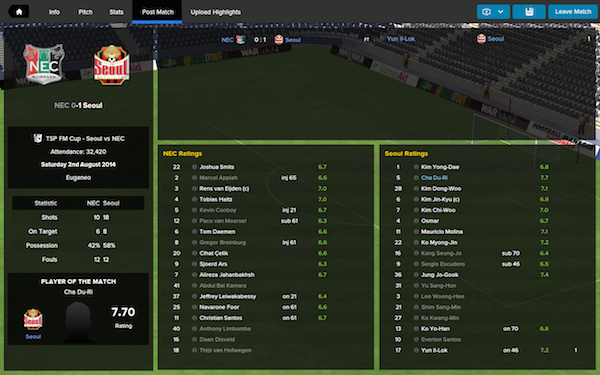 But there’s no question as to the identity of the game of the round. If you were at Pittodrie, you’ll have a story to tell your grandchildren. Watch this video and then let Eoin O’Reilly of Aberdeen and Aaron Smithies of Chamois Niortais take up the story.

If your team made it through to the third round and you’d like to be featured in the next round-up, send us something interesting. As you can see, we particularly like match reports, blogs, pics and videos. However, if you’d like to host it all on your own blog, just send us a link and we’ll send our readers to you. The email address is: [email protected]