Over 100 came to do battle, knowing that only one of them could win. Some fled, refusing to acknowledge messages from their opponents, forfeiting their place in the fray. Of those who held their nerve, dozens were obliterated on the first day of skirmishes. We take a moment now to remember their sacrifice and to tell their stories.

The Set Pieces own team, Excelsior, were drawn against Calvin Hung’s Blackpool, a misbegotten array of last minute waifs, strays and ne’er do wells. But Hung rallied them to his flag and unleashed an all out assault on the Dutch side. The Set Pieces, however, are masters of the dark arts. Buses were parked, possession was retained and Blackpool were forced to open fire from range. Twice, they hit the post. Twice, they were punished on the break.  It’s our party and we’ll progress how we want to. 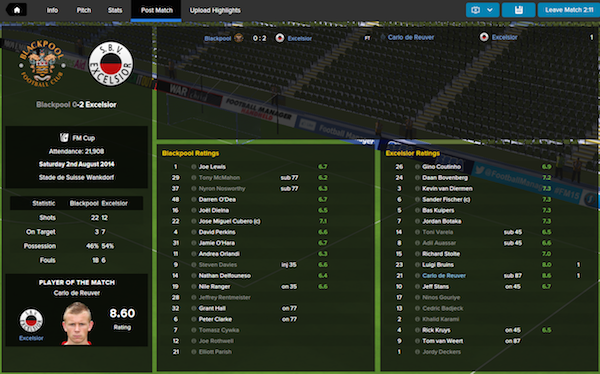 Elsewhere, there was an unexpected Canadian derby as FMTensai ‘s Toronto took on Montreal. Tensai had a secret weapon. Tensai had Jozy Altidore. Find out what happened on his excellent and impressively comprehensive blog here.

There was an all Scottish clash too as Aaron Smithies’ Aberdeen took on Stephen Jamie’s Hearts of Midlothian. “There was some controversy in the tunnel after the match,” reports Smithies. “A slice of Hawaiian pizza was seen zipping through the air toward the Aberdeen camp. Controversial scenes.”

You can find out what happened during the game, by watching the highlights here:

“Never leave things till the last minute, kids,” said Angers’ boss Chris Deeley. “Advice that I’ll often give and absolutely never take myself. And so, Sunday night devolved into frantic phone calls with a complete stranger as we tried to make Steam work properly and arranged a last-second game around an unexpected A&E trip. Don’t leave things till the last minute. The faintly northern voice on the other end of the phone chattered away about his team – “I started a game as them the other day, their aim is just ‘fight bravely against relegation’. That’s not a good sign, is it?” – as we tried to set up the game.”

“Kickoff beckoned once I’d summoned a left-back out of the reserves, and we hung up the phone with a mutual “good luck mate.” Neither of us really meant it. I set my team of absolute giants up to keep the ball off the ground, beautiful game be damned. A beautiful scoreline – now that’s what we’re looking for here.”

“90 virtual minutes later, I’m on the right end of a 3-0 win. We get back on the phone to wrap up. “… Well, you went a bit Stoke, didn’t you?” I think about apologising, but I feel no shame. I finally understand Tony Pulis. I might even get an Angers SCO baseball cap made or shipped over before the next round.” 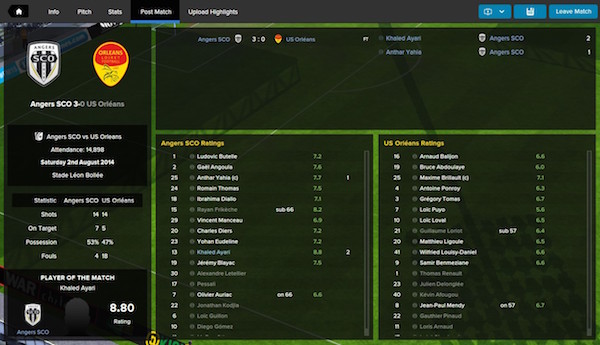 There were extraordinary scenes in Dijon where a brace of red cards appeared to seal NEC’s fate. Instead, the nine men came out as winners. What did Dijon boss Sveinung Bjørnstad make of that?

“Two men up, yet 0-1 down after 90 minutes thanks to two completely useless strikers, not being able to hit anywhere but far, far wide, or straight at the keeper. Even my opponent post-match said to me, and I quote: “That was ridiculous, you deserved to win in all honesty”. Oh well, pretty sure I’m gonna get over it. It’s been a pleasure, regardless how short. Hope to be able to participate again soon. Gonna be prepared next time, though…”

NEC manager Josh Wignall was left staggered by the game and appears to believe that his name is now on the cup.

“Nine man NEC held on for what was surely one of the most ridiculous results the FM Cup has ever seen, despite a complete lack of discipline. We’re very lucky to be in the pot for Round 2 after being one man down from the 17th minute and two down with half an hour to go. Poor Sveinung will wish that my keeper Joshua Smits had never picked up a pair of gloves after several missed opportunities. The question now must be how far can I take this team? Glory surely awaits…” 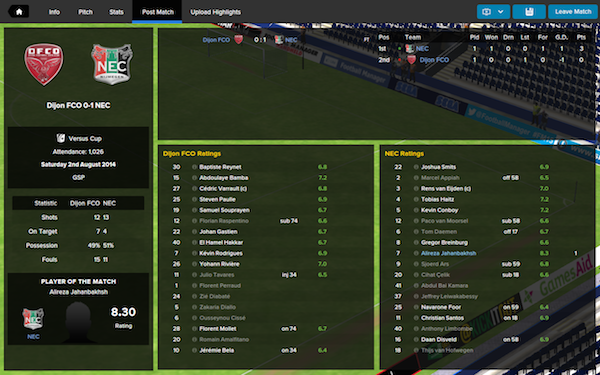 Another good result for MLS came with Houston’s 3-2 victory over Jeonbuk. Dynamo boss Max Dudfield was delighted. And helpful too.

“A classic encounter between two teams at the pinnacle of club football, my victorious warriors of Houston are onto the next round. Anything else you need to be done after each game?”

Jeonbuk coach Simon Carter was a little less amused and hit out at the computer generated officials who had wronged him.

“Unbelievably, I lost!” he bellowed to an unsuspecting reporter.  “A horrendous offside decision ruled out what would have been a dramatic equaliser for 3-3. Excellent competition though!” 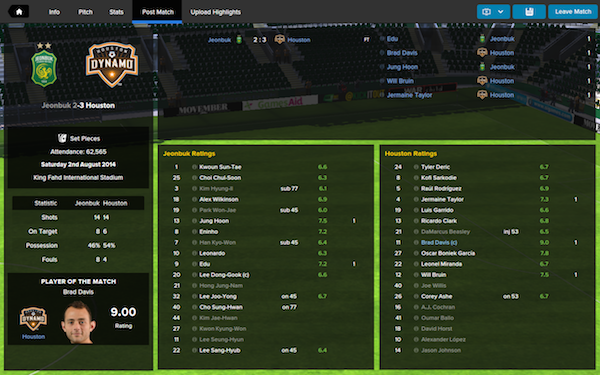 (F-F indicates a match that was forfeited. The team in bold progresses to the next round)

If your team made it through to the second round and you’d like to be featured in the next round-up, send us something interesting. As you can see, we particularly like match reports, blogs, pics and videos. However, if you’d like to host it all on your own blog, just send us a link and we’ll send our readers to you. The email address is: [email protected]