From over 100 players, we’re down to the final sixteen and it’s all getting very tense. Brace yourself for shocks, thrashings and the wet-rimmed eyes of eight football managers who were so close to making a name for themselves, but have just been snuffed out like a cheap candle. 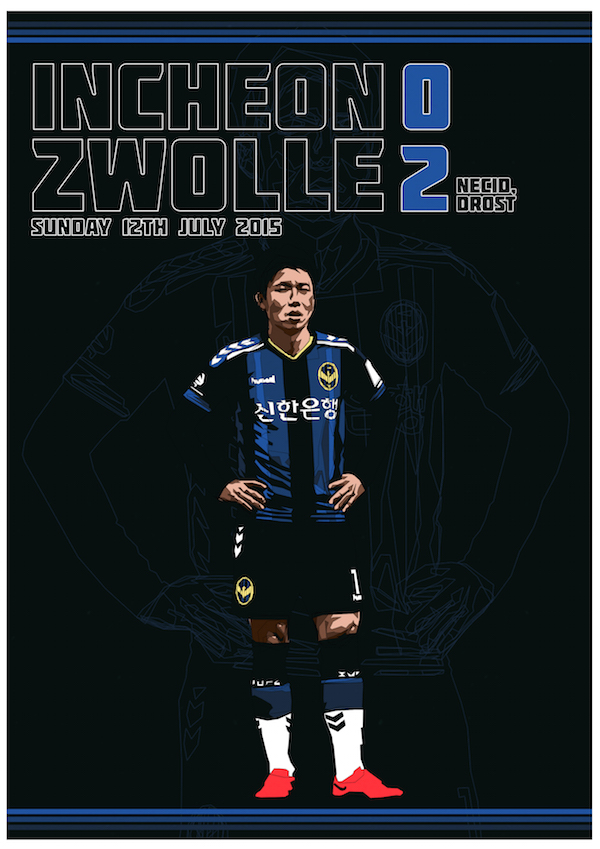 This was a tale of two Football Manager Cup favourites going head to head at the IJsseldelta Stadion. Media friendly Nicholas Dutton as PEC Zwolle, against poster creating wizard Davey Blackett as Incheon. Unfortunately, we had to lose somebody, and it would be Blackett. Goodnight, sweet prince.

A 2-0 scoreline may sound convincing, but this was far from a stroll in the park for Zwolle as Incheon edged the Dutch side in both possession and shots on target. However, as we see so often in football, you can dominate as much as you want but at the end of the day it’s all about taking your chances. Blackett, resigned in defeat, rued the fortunes of his side and simply stated, “Gentlemen, unfortunately my luck has run out.” And with that, he was gone. Farewell, Davey. We’ve very much enjoyed your work throughout the tournament.

Contrasting scenes for Nicholas Dutton and his PEC Zwolle side however, who now progress into the Quarter Finals. After the game, Dutton gave his thoughts to local journalist Martin Lloyd.

‘You set up quite defensively last time out against Philadelphia, but reverted to your attacking ways this time round. Are you admitting a mistake in your approach in the previous round?’

Not at all. We adapt our tactics to suit the opposition. I’ve always believed in horses for courses. The most appropriate thing to do here was to attack and show what our potent wingers can do.

‘Did the early goal help to settle your side at all?’

Early goals can sometimes be a hindrance. They can give you overconfidence. What impressed me was that this team didn’t allow that first goal to change their work ethic and their commitment to the attacking football that they play so well.

‘How about that second before half time – Jesper Drost is a real talent, isn’t he?’

I wish he’d stuck it in the first time! (Laughs) He’s a special player. He’s got so much more to give in this tournament.

‘What were your thoughts with the changes late on? Did you apply a more defensive mentality because you were worried about Incheon coming back into it?’

‘Who are you hoping to meet in the next round?’

Well, we’re still waiting to find out the results from the other fourth round ties, but Patrick Thistle or Dundee United would be special on a personal level after my five successful seasons at Brechin City. We’d certainly be excited to test ourselves against the New York Red Bulls and a Dutch derby against FC Utrecht would one for our marvellous fans.

More brilliant post match coverage there from Dutton via Lloyd, and we’ll be hoping for more of this in the future. 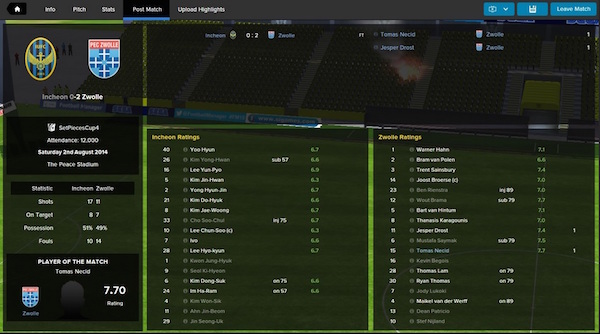 One of the favourites for the trophy, Alexander Partridge of the Seattle Sounders, progressed against Findley Mair and his Colorado Rapids in this all American affair. Partridge, as always, gave us his managerial insights into proceedings as his side played some beautiful stuff. Despite their dominance, it took Seattle time to settle into the game, with the hero of the last round Clint Dempsey striking the woodwork repeatedly.

“Something I’ve learnt from this tournament is that reverting to a lineup that won you the last game is an absolute waste of time. After Dempsey’s heroics up front in round 3, this is where he began vs Colorado. And their stadium, Dicks Sporting Goods ground, has to be in contention to hold the final,” giggled Partridge like a schoolboy. “Within the first 11 minutes Dempsey had managed to hit the bar twice and have one saved on the line by a defender – unfortunately I couldn’t help but feel as though, had we lost this game, then I’d look back to those chances and really start to hate the guy.”

Despite all of the missed opportunities, fan favourites Leonardo Gonzalez and Gonzalo Pineda (try saying those two names quickly) made the difference for Seattle, as the latter scored two debatable penalties to put the Greens in front. “A consolation goal was conceded in the 84th minute but by then the damage had been done and we were coasting. Even though I thought Colorado were a very good team, the game was more comfortable than many of the others. ” said Partridge, who then concluded his post match interview with a huge “UP THE SOUNDERS!” 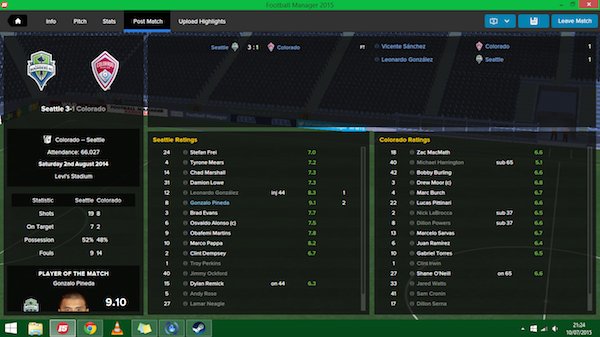 The shock of the round. David Kempshall and his defensively resolute Real Salt Lake took down Joe Heard of the New York Red Bulls. Just like the PEC Zwolle vs Incheon game, the final score did not tell the full story, as the Red Bulls peppered the Salt Lake goal with 11 shots on target but could not break through. Kempshall, ecstatic with the result, was quick to draw praise on his veteran goalkeeper who achieved an impressive 7.4 rating. “It won’t go down as one of the classics, but step up Nick Rimando. It would have been Red Bulls 5 Salt Lake 1 without his heroics.”

You’ve got to take your chances, kids. Credit to Kempshall and Salt Lake, but commiserations to Heard and the Red Bulls. 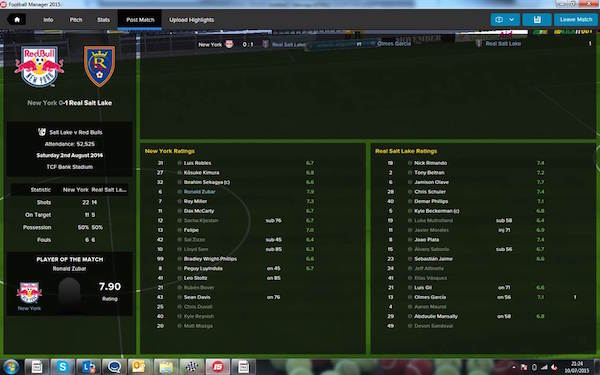 Joe Krishnan and FC Utrecht just keep on winning. This time around, it was Max Dudfield and the stubborn Houston Dynamo, who just won’t go away. But on this occasion, they were simply outclassed by the Dutch side. Dudfield aptly began his post match comments with ‘Houston, we have a problem.’ followed by a more plaintive, ‘our forwards couldn’t hit a barn door’. This was the truth, as the Dynamo managed just five shots on target despite their 13 attempts. Shooting practice on Monday, we think.

Our friends at @FCUtrecht continue to pile in their support, and after their emphatic win, they took to twitter again to offer quite an incentive for Joe to keep on winning! 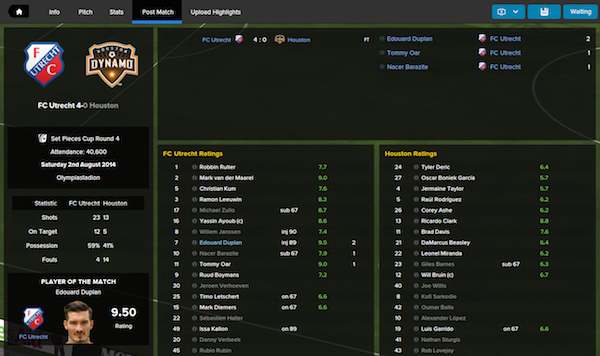 If your team is edging ever closer to the title and you’d like to be featured in the next round-up, send us something interesting. As you can see, we particularly like match reports, blogs, pics and videos. However, if you’d like to host it all on your own blog, just send us a link and we’ll send our readers to you. The email address is: [email protected]