In what was surely the game of the round, Steve Mogan and his Dundee United side locked horns with David Kempshall of Real Salt Lake at Tannadice Park. Just over 32,000 were in attendance to watch this mouth-watering quarter final, and boy were they in for a treat. Defences be damned, this was an attacking masterclass with a mammoth 22 shots on target registered by the two sides at full time. Not only were there eight goals, but they were all scored by different players which highlighted the fluid style of football pushed by both teams throughout the clash.

Despite his heroics in Real Salt Lake’s Round of 16 triumph against the New York Red Bulls, this would be a disappointing match for goalkeeper Nick Rimando as he was forced to pick the ball out of his net five times, scoring an uncharacteristic 5.7 match rating. This game was  won in midfield with Paul Paton, Ryan Dow and Calum Butcher dominating proceedings for the men in orange. The audacious Argentinian Javier Morales could not inspire the claret and cobalt to victory, in spite of his Man of the Match 9.0 performance.

Huge credit must go to both managers for removing the shackles and going for it, but unfortunately we must say goodbye to Kempshall who has defied all odds to get this Salt Like side even this far. However, good luck to Jake Seviour and Dundee United, who progress to the semi finals after this entertaining win. Having said that, there’s one slight concern for their fans.  They’ve only one a single game so far in normal time, a 1-0 victory scraped against AS Nancy Lorraine. Can they continue to ride their luck? 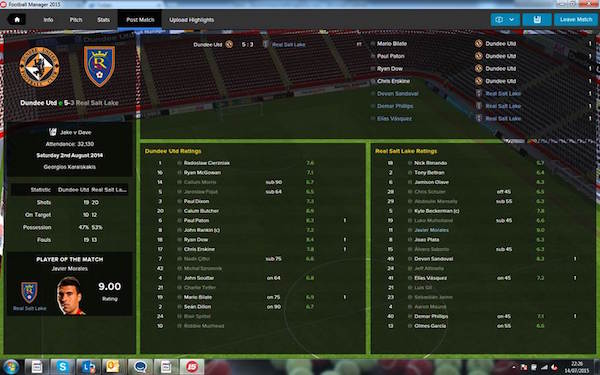 Joe Krishnan and FC Utrecht. A match made in heaven. What more can we say about this wonderful partnership? In another match full of free flowing football, the 4-1 scoreline does no justice to Toygun Goktas and his Troyes side who more than played their part. Both sides had eight shots on target, and the Dutch side only just won out in terms of possession and fouls in the favour of the Dutch side. Yet again, Utrecht owe their success to their star man Edouard Duplan who played another blinder, scoring two goals and gaining a healthy 9.1 match rating, closely followed by ex-Arsenal man Nacer Barazite. We now bid farewell to Goktas, who will be ruing his sides missed chances as on another day it could have been so different for the men in blue. 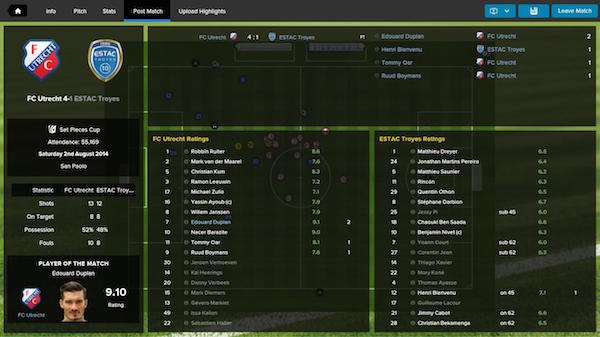 @FCUtrecht continue to pile on their public support for Krishnan as he continues his quest for the prestigious Football Manager Cup. They now face fellow Dutch side PEC Zwolle in the semi-final, who will definitely need to be switched on at the back because despite played the fewest matches of the remaining teams, Utrecht have also scored the most goals in the tournament. Perhaps all that support is paying dividends. Perhaps if Excelsior had been so generous with their time, The Set Pieces might still be involved. But don’t get us started…

@joekrishnan @thesetpieces Let's 'PEC' our stuff and claim that spot in the final! Good luck, Joe. Keep making us proud!

In front of a measly 6,000 crowd at the TRE-FOR Park, this would prove to be a very tight affair with one goal and Ben Rienstra being the difference between the two sides. The midfielder was head and shoulders above everybody on  the pitch with his 8.3 match rating, in a match up that lacked a lot of quality. Due to technical issues (losing the exhaust of his car), Director of Communications Martin Lloyd was unable to file a match report so it was all down to the manager himself, Nicholas Dutton, who mentioned to us “please don’t expect much, I’m the tactics man, not the wordsmith.” No judging, people!

“OB came out as confident as a lion in a bout with a gazelle. Before I could reach for my chalk board in panic, Andrew Gray’s men had three one-on-one chances, which were either scuffed wide, hit the post or foiled by ‘keeper Hahn.” said Dutton. “The only surprise when they eventually took the lead was that they required a set piece – and what a strike it was, reminiscent of John Arne Riise’s famous shot against Manchester United. Hahn barely had time to register that a shot had happened, let alone make any attempt to stop it.

Something needed to be changed at half time, and it duly was. “Changes were rung. Forget this control lark, we needed to attack. Drost was pushed forward into an attacking role and the left back, van Hintum, was moved into an advanced wing-back role. From there, he picked up on a loose ball, looked up and started a move which was to find Drost who spotted the ever-reliable Necid ahead of him. Necid WAS reliable. The ball bounced off the back of the net. Total football.” Managerial expertise at it’s finest.

“Chances came and went for both sides and the game seemed to be petering out towards a draw and the intrigue of extra time. But Zwolle’s men are made of stern stuff. Saymak picked up the ball on the side of the penalty area and worked it central to the majestic midfielder Ben Riestra. He hit a gloriously shaped stroke into the top of the net and the Dutch were in seventh heaven.” Delight for Dutton, but the afternoon was grey for Gray.

Congratulations to Dutton & Co who progress into the semi-finals, but commiserations to Andrew Gray and Odense BK who were very close to doing so as well. 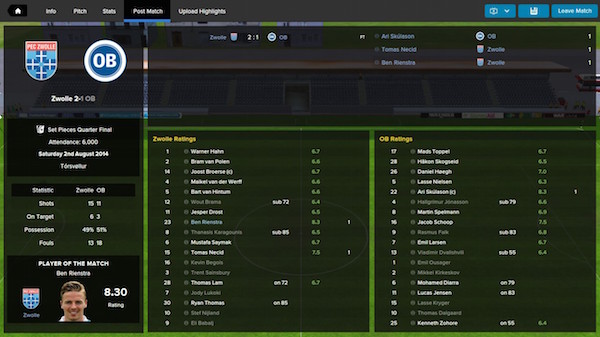 This result stunned everybody here at The Set Pieces, and with perfectly good reason. The tournament favourites Seattle Sounders lead by Alexander Partridge, were smashed and most definitely grabbed by Steve Mogan’s FC Seoul. The Americans peppered the Korean backline, but their resilient back four and veteran goalkeeper Kim Yong Dae in particular were having none of it, with the 35 year-old scoring an impressive 7.6 match rating – the joint best match rating in the side. Despite Seattle scoring 11 goals in their last three matches, the blank fired on this occasion was all that surprising on second glance, as the Korean side had only conceded two goals in their last four, in addition to having recorded the most clean sheets of all the teams left in the tournament. They’ve got Seoul, all right. (ED’S NOTE: Phil, you’re fired)

So this is the end of the road for Partridge and his talented Seattle side who have treated us with goals galore and insightful post match comments throughout the tournament. But, huge congratulations to Steve Mogan and FC Seoul who progress yet again after showing attacking football the finger. Defensive solidity is clearly where it’s at. 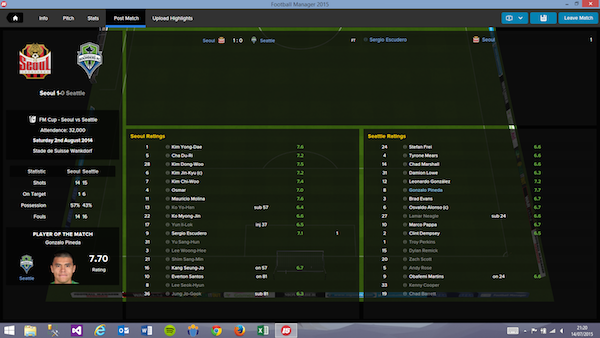 There are only four of you left now, but we need you more than ever. Send us your blogs, pictures, videos and memories. We’ve got to squeeze two more pages out of this or we’ll have to do some proper work and no-one wants that, do they? The email address is: [email protected]