This is a new series on The Set Pieces in which Adam Hurrey casts his eye over the numerous attempts to depict football in films. We kick off with When Saturday Comes, starring 90s heartthrob Sean Bean…

Talk of Jamie Vardy: The Movie – featuring Vinnie Jones as the semi-forgotten Nigel Pearson and, hopefully, a more evocative title – seems to have dampened a little since the comedown from Leicester’s title win kicked in. But, despite football’s frequent claim that you “couldn’t script” its various highs and lows, the template for Vardy’s straight-to-Netflix biopic is already 20 years old.

Perhaps as a tidy cashing-in on the pre-Euro ‘96 fever, Sean Bean was rather easily persuaded to take on the role of Jimmy Muir (invariably a “Jimmy”, these types), a hard-drinking, family-loving Sunday League footballer who gave up hopes of a professional career to work in the local brewery. With the Highlander himself, Christopher Lambert, among the producers, this was already destined to be a high-class affair.

We start with Young Jimmy Muir: untouchable in the playground, but still liable to receive a clip round the ear from his gambling-addict father.

“What became of that young actor?”, you ask, perhaps hoping he embarked on a Scott Parker-esque career trajectory. In fact, this was the peak of his fame – give or take the odd Dairylea advert – and he now works in data security.

Anyway, back to Sheffield, and – a decade on from being told by the school careers advisor that his only two options are “going down the pits” or “work in a factory” – he’s chosen the latter. Which is sensible, as the last coal mine in South Yorkshire (IMDB’s ever-reliable “Goofs” section reveals) had shut about three years before this film is set.

Professional dreams scuppered, Jimmy – now 26 and played by an absolutely-not-26-year-old Bean – still turns out for his local pub team. He’s a class above, naturally, but the lack of goalnets can’t help but detract from the spectacle.

Jimmy handles the step up quite comfortably, slamming home the winner on his debut, fulfils the contractually-obliged Sean Bean Arse Shot in the bath afterwards, and then headbutts his jealous captain after Ken wangles Jimmy a trial at First Division Sheffield United. 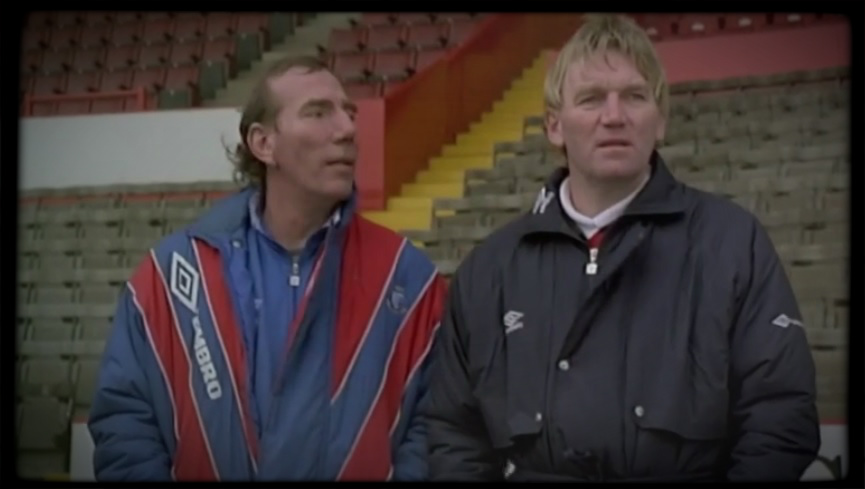 Jimmy impresses club legend and coach Tony Currie – who makes admirably hard work of playing himself here – but the Blades’ manager “George McCabe” has to make the final call. The night before the biggest day of his life, Jimmy faces the humiliation of asking for a Coke at his best mate’s birthday party…and the complexities of being Jimmy Muir are duly laid bare:

Twelve pints, eight whisky chasers and one stripper later, Jimmy is making a fool of himself on the Bramall Lane pitch in front of that long-suffering dad from Hollyoaks, who is handed the No-Nonsense Scottish Manager role that football films seem to think is absolutely mandatory.

Sean Bean – gaining some vital experience for his next role in Anna Karenina – remembers the nightclub scene particularly fondly:

“That were one of the highlights of the film for a lot of the people involved. We were in a nightclub at ten o’clock in the morning, with suits on, and there were all these gorgeous birds dancing about with nowt on in front of us. It were a good day.”

There is a cameo role in the training session for a permanently fuming Mel Sterland, whose near-400 appearances for Sheffield Wednesday qualified him perfectly as a convincing captain for their cross-city rivals. 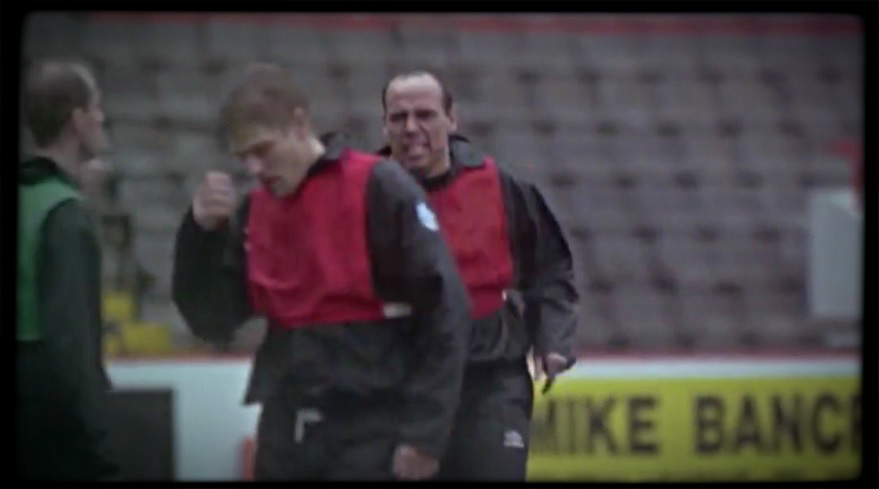 Jimmy hasn’t just let down Ken and himself, but he’s also let down his love interest Annie Doherty (Emily Lloyd), wage clerk at the brewery, and owner of the shakiest Irish accent in cinema history. Mel Sterland’s autobiography – Boozing, Betting and Brawling – describes Lloyd as a “right stuck up cow” on set, so perhaps it’s fair enough.

Still, Jimmy’s probably seen Rocky a few times with the lads, and must know that second chances aren’t that hard to come by after all. This is nothing a short training montage won’t fix.

A quick jog round Sheffield, a straightforward cross in training, and Dad from Hollyoaks is won over! Jimmy’s signed up on a Bosman.

United’s presumed injury crisis is such that Jimmy’s straight on to the bench for the FA Cup quarter-final at home to Arsenal, and then again for a league game against Leeds (who should be a division above, but those daft Americans won’t care about that, etc), but he’s still waiting for his chance to shine.

That chance comes in the Cup semi-final against Manchester United, no less, but any football pedants still watching might want to prepare themselves. IMDB, normally rather matter-of-fact, actually sounds rather impatient with the whole thing by this point:

“As already explained, the FA Cup Semi-Final should be played at a neutral venue and not at the home ground of Sheffield United – as in the film. However, there is also the alarming fact that the April semi-final takes place in mid-winter. This is due to the footage from the ‘real game’ actually being an FA Cup 3rd tie in January, 1995.”

Manchester United cruise into the lead, the Blades’ No.9 “Dave” does his ankle ligaments, and Dad from Hollyoaks is, predictably, furious at half-time. 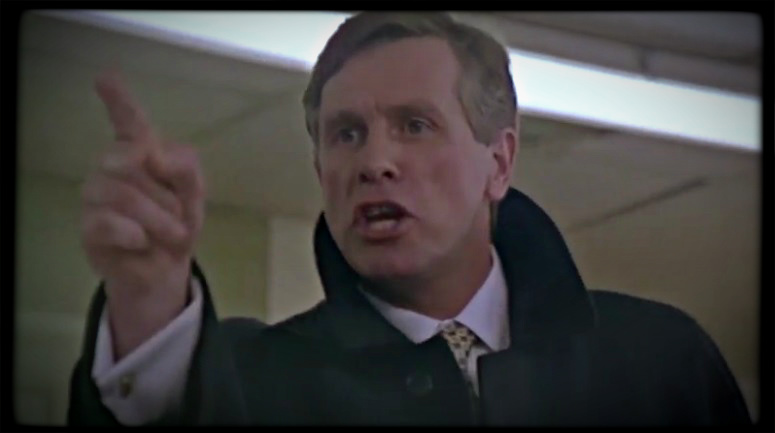 He rings the changes: “Frank” comes on for “Steve” and, in the place of the crocked “Dave”, is our man Jimmy.

On he comes – and his first contribution is to go straight through what looks vaguely like Phil Neville. The referee, for some reason, already had his yellow card out:

Bean’s no stranger to the rough and tumble of it all, though, as he told the Mirror while promoting the film:

“Football is a man’s game,” he says [although the film was written and directed by Maria Giese]. “Though women are getting more interested in it now, and they enjoy the matches just as much as we do, but it’s a man’s game for all that. I hope it stays that way – otherwise it will get like American football, where they bring their families and have hamburgers and everything, and that would spoil it for me.”

It gets worse for Jimmy, Sheffield United and a now self-combusting Sterland: Manchester United go 2-0 up with a free-kick (that butchers some footage of an Eric Cantona chip). Sterland’s ready to kill Jimmy by now, so our hero rescues the situation by nodding the ball down for the skipper to rifle home for 2-1. Half an hour to go.

2-2! Jimmy bundles his way through the Premier League defence to slam home the equaliser, and the lads in the pub – with the exception of Embittered Father (below, left) – can’t contain themselves. 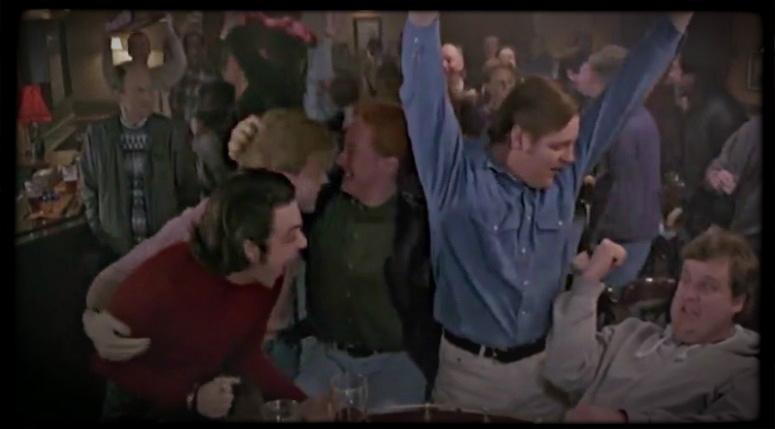 The football choreography is refreshingly unspectacular – there are no impractical flying volleys here – and that works to the film’s credit. Bean himself recognises the problems directors have always faced with trying to depict the game on the big screen:

“I like films about football. It’s notoriously hard to shoot and a lot of directors won’t touch it, they just think that you can’t capture it. But I think we did to an extent, because we didn’t concentrate on any fancy moves. We just got the spirit of the game. You know, the thuds and the lugs and the like.”

Rather than settle for a replay – presumably back at Bramall Lane, which would be convenient – Sheffield United’s tails are up…and Jimmy is at the heart of it again. 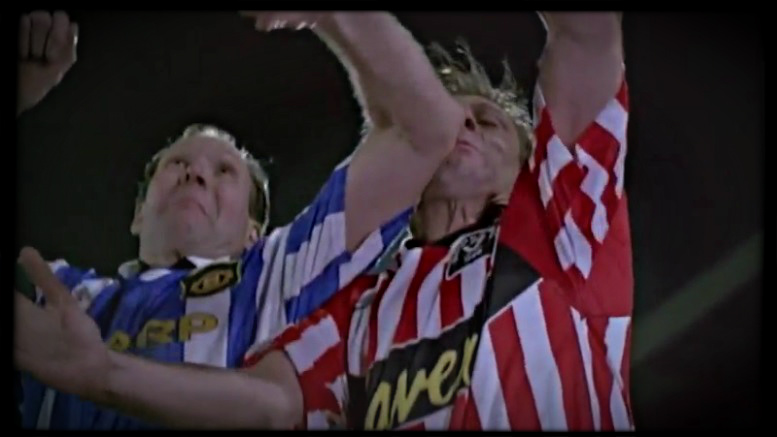 An elbow in the face from one rather ancient-looking defender is enough to convince Jimmy’s No.1 fan Mel Sterland that this heavily concussed Sunday League footballer should take the crucial penalty to put them into the FA Cup final. Someone’s had a word – maybe the director.

While the fictional Jimmy gathers himself and his senses to slam home the script-completing winner, thus neatly mending all his personal relationships in the process, the very real Sean Bean wasn’t quite as calm at the time.

“I were shitting me’self. I could see the clock ticking [at half time] and I thought, bloody hell. Once I got on I were OK, it felt good.” 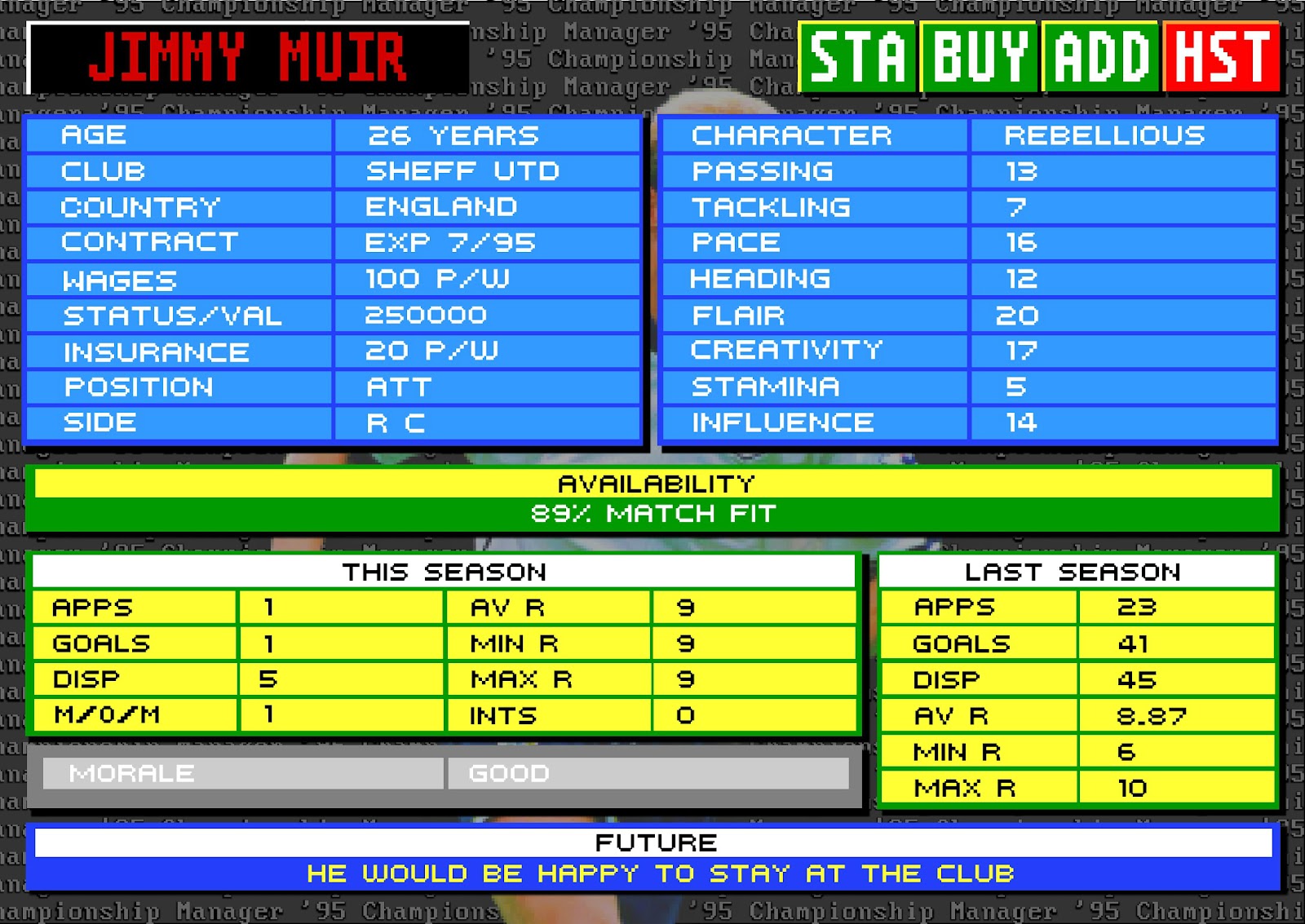 We don’t get to see what the future has in store for Jimmy – even in the final itself – which is a bit of a shame, but his emphatic finish beyond a thoroughly unimposing Manchester United goalkeeper is appropriately straightforward for a film that whistles along quite nicely from solo playground goals to a happy Mel Sterland in just ninety minutes.

A modern classic? Well, in the grand scheme of the rather chequered genre of the football film, you shouldn’t rule it out.