The best is yet to come

There’s no easy road to choose

You either win the game…or lose.

Not my words, reader, but the words of “Movin’ Up”, one of several songs on the soundtrack of 1987’s Hotshot that are so bland that they become almost meaningless. At this point in proceedings, our hero Jimmy Kristidis (Why. Are. They. Always. Called. Jimmy.) is sat high up in a deserted Giants Stadium, surveying his kingdom-to-be as the star player for the New York Rockers. 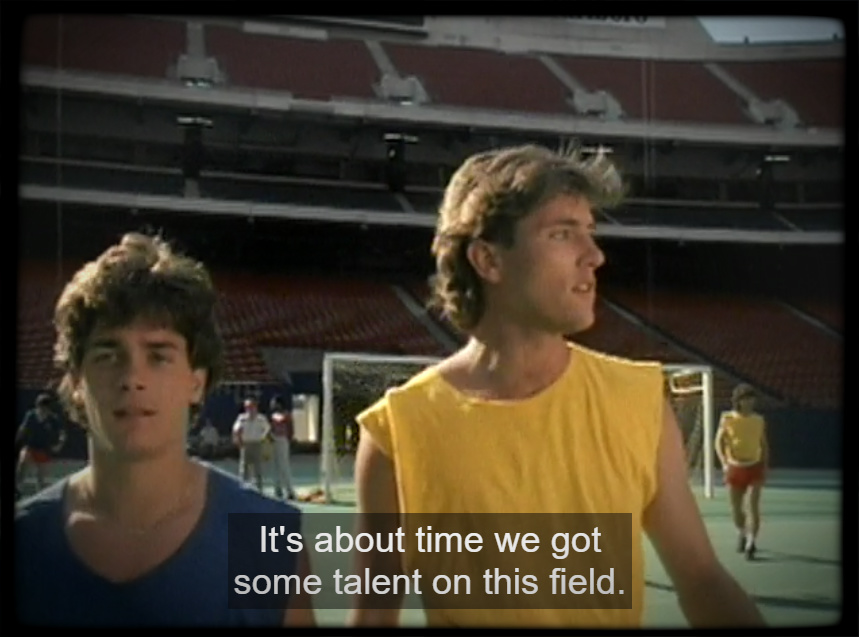 Unfortunately for Jimmy, things aren’t going to be that simple. The scriptwriters lay on the obstacles nice and thick: 1) Jimmy’s lying to his filthy-rich parents about his budding soccer career, 2) Jimmy’s hiding the fact he’s filthy rich from the club, his teammates and the press, 3) Jimmy’s best mate Vinnie is paralysed by a stray elbow from one of their rivals, the Titans, 4) Jimmy is a bit of a prick, at least at the start.

That doesn’t leave much room for the other staple of against-the-odds sports movies, the love interest. He does meet the pleasant but dim Mary in a diner early on, with whom he briefly bonds during a healthy bit of football mansplaining, but we never see her again. Perhaps she just thinks 4-2-4 is a bit outdated, perhaps she doesn’t want a relationship with a man who lays out cocktail sausages on a motel duvet, who knows? 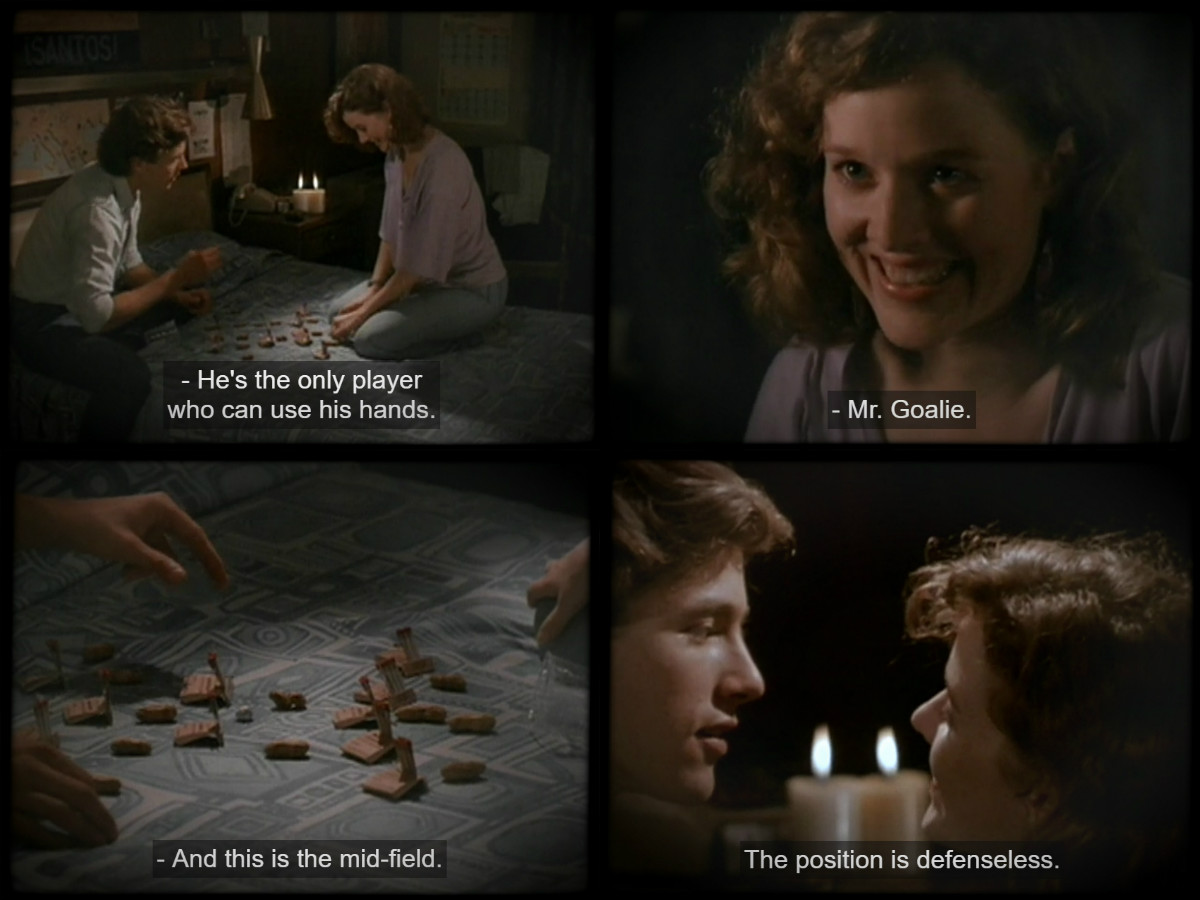 Jimmy impresses at training, which consists mostly of shooting at a helpless goalkeeper from six yards on first-generation astroturf, but his abrasive nature doesn’t do him any favours. Oddly, though, his apparently problematic approach to the Rockers’ Egyptian midfielder Mohammed doesn’t seem to register with the coaching staff. 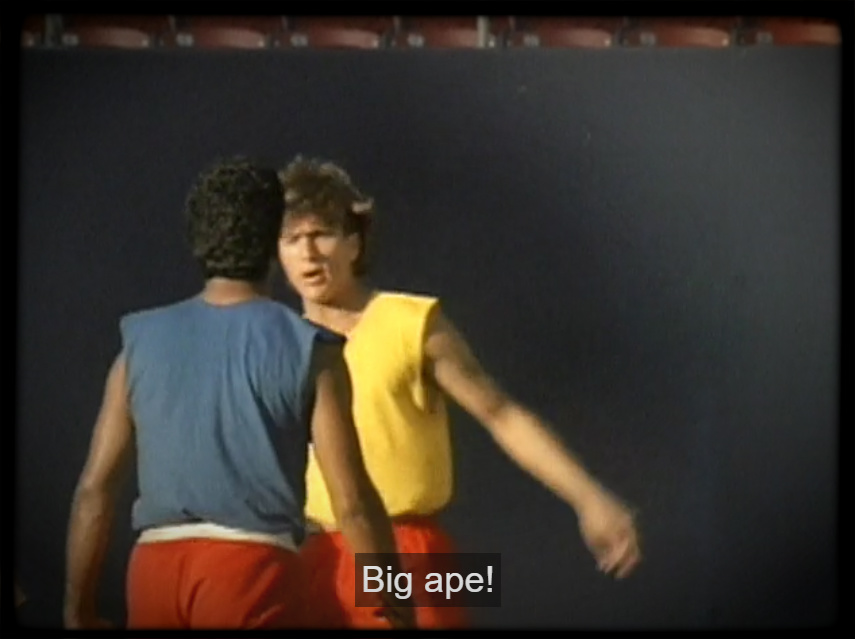 In one of the film’s rare moments of forward thinking, we get a glimpse of Jimmy’s highly meaningless analytics – 98.1 for acceleration, 97 for “reaction” and an impressive 98 for “backwards mobility”, the classic hallmark of a natural talent. 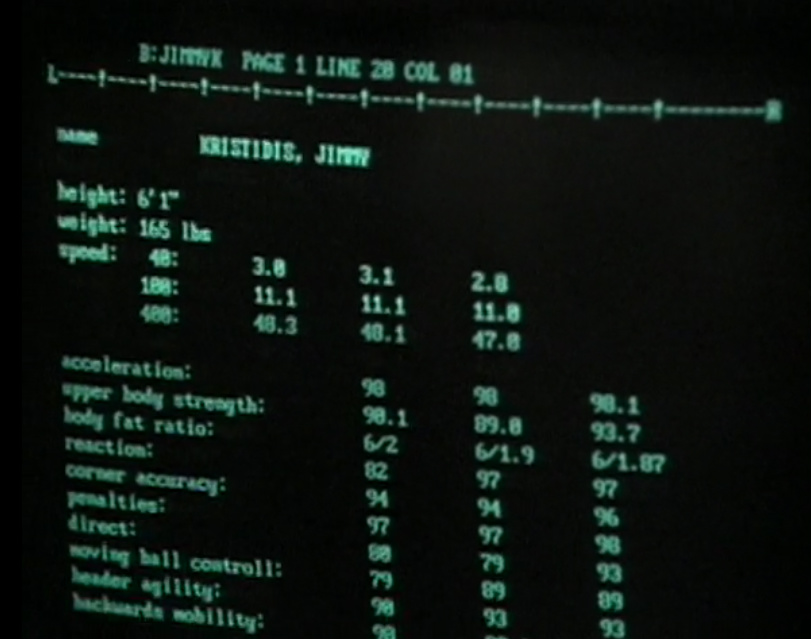 Anyway, we’re well on the way to the first big twist. Despite being offered a contract by the Rockers, Jimmy’s response to sitting on the bench earns him a two-month suspension.

It’s here that things get very Daniel LaRusso. Jimmy sells his car to fund a flight to Rio, where he’s immediately mugged at gunpoint for all his cash, so he’s forced to hitchhike into the rainforest in search of the legendary but now sighing and reclusive Pelé – sorry, “Santos” – who has long retired from the game to live alone and grow tomatoes.

Jimmy, turning up unannounced at the home of a man who doesn’t want to speak to anyone, is given some Miyagi-esque short shrift for his request for Santos to “teach him soccer”. 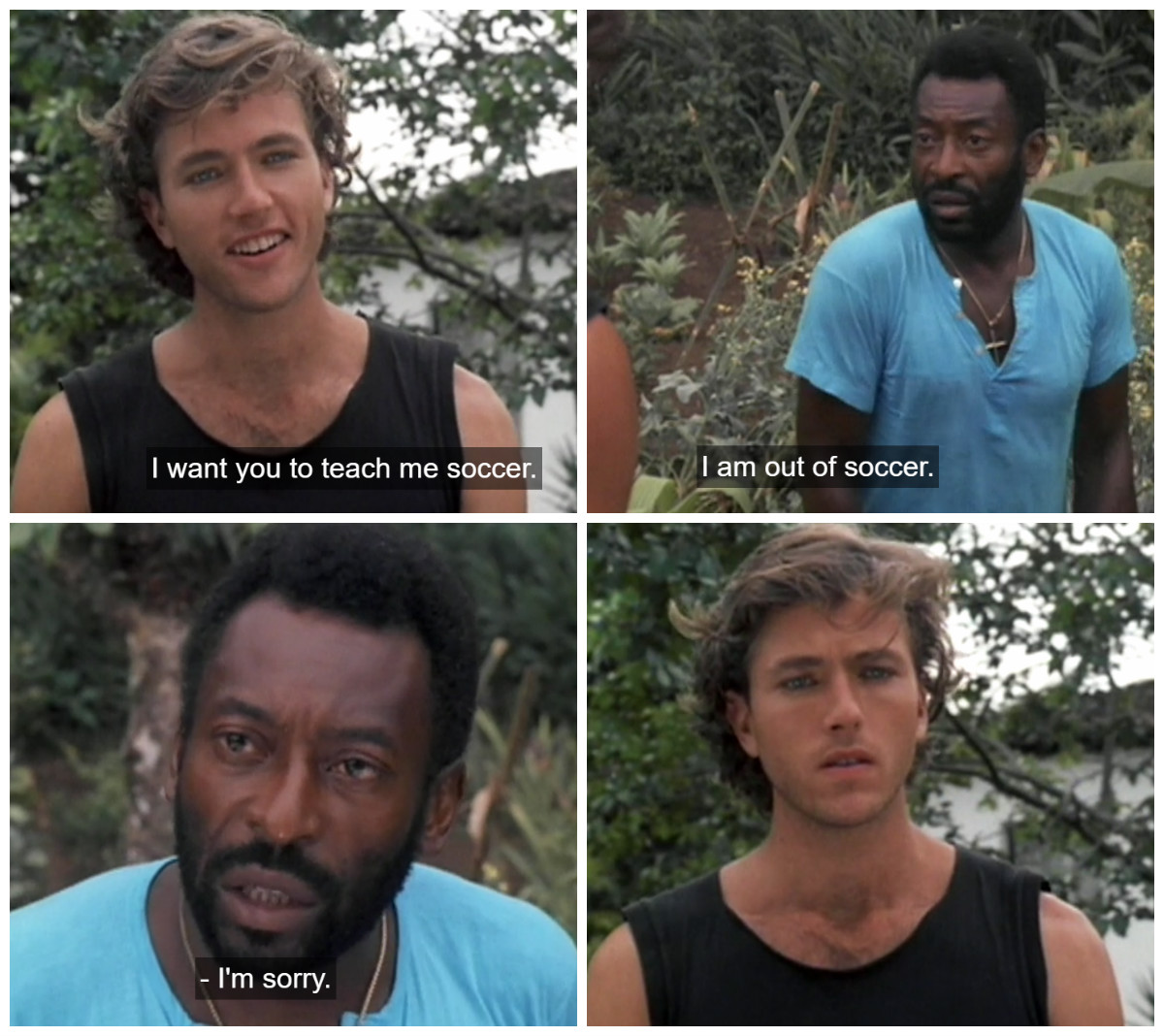 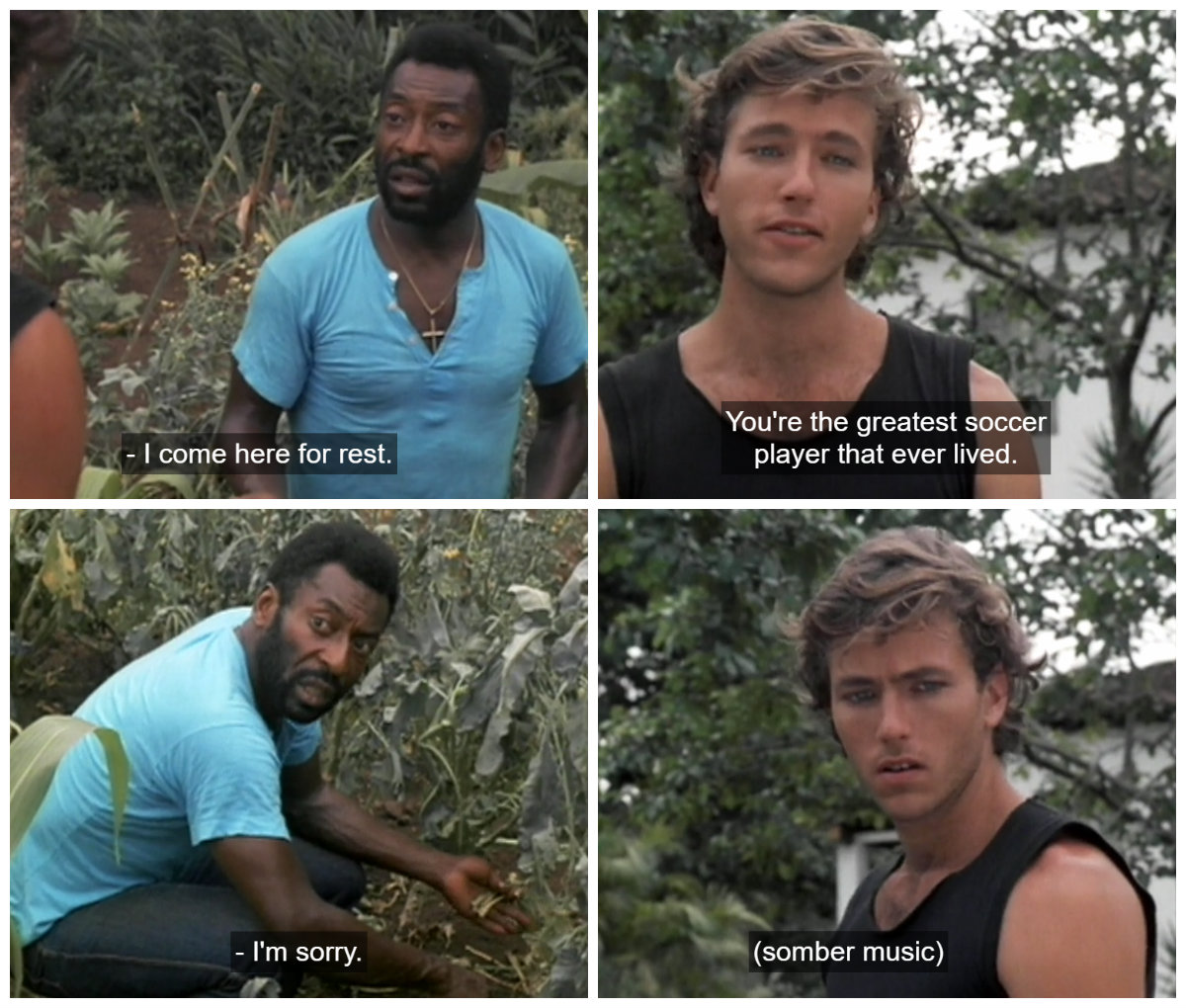 Before the classic trick of simply not going away finally pays off. 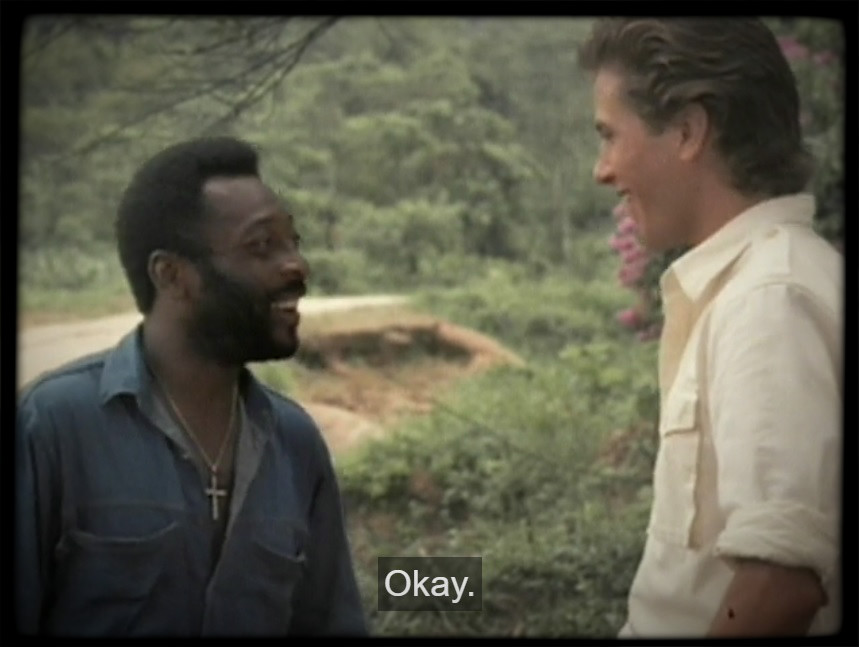 That won’t do for the greatest player who has ever lived so Santos’ parting gift, before Jimmy flies back to New York for footballing redemption, is to teach him how to do a bicycle kick. Jimmy – the thickest man in the world – has always wondered how it was done.

Equipped with all this new soccer knowledge, Jimmy returns to the Rockers in time for a late charge towards the Championship playoff, a journey expediated in the usual way of swirling newspaper headlines. In the final, they face best-mate-paralysing bad boys, the Titans. Despite Jimmy’s right-wing flair – and a header from a range of literally one yard – the Rockers go behind twice, including the most stupid goal ever seen.

A brief digression here before we return to the painfully obvious narrative. In a search for the man responsible for such a heinous depiction of football, we find that the credits list a John Stavros as “soccer trainer/choreographer”. Stavros, a quick Google reveals, is a former player who turned down a contract with the New York Cosmos to become (if his LinkedIn page is to be believed) an art director at Playboy and the creator of “Women of Soccer”, a calendar that features…well, take a wild guess.

Back on the astroturf, the Rockers pull themselves level thanks to a free-kick from veteran star José, the 493rd and final goal of his career. Then, with just a few seconds left on the clock, Mario van Peebles – star of Jaws 4: The Revenge, among many other things – muscles his way down the wing for one final throw of the Rockers’ dice. Stavros, presumably as part of his contract, gets the chance to clip the decisive cross into Jimmy and…

Perhaps Hotshot was a badly-timed enterprise. The film was released in 1987, three years after the sad death of a North American Soccer League that had been propped up by Pelé, Beckenbauer, Best and Cruyff et al, and still a year away from the USA winning the vote to host the 1994 World Cup. This was, then, a bit of a black hole in American soccer history, down which this slightly embarrassing 94 minutes almost disappeared, except for some ropey footage on YouTube.

There are some surprising little nuggets. Pelé – clearly having picked up a few pointers from Escape to Victory six years earlier – isn’t abysmal in his role as the reluctant mentor Santos, while it turns out that the pulsating electronic score was composed by none other than William Orbit. 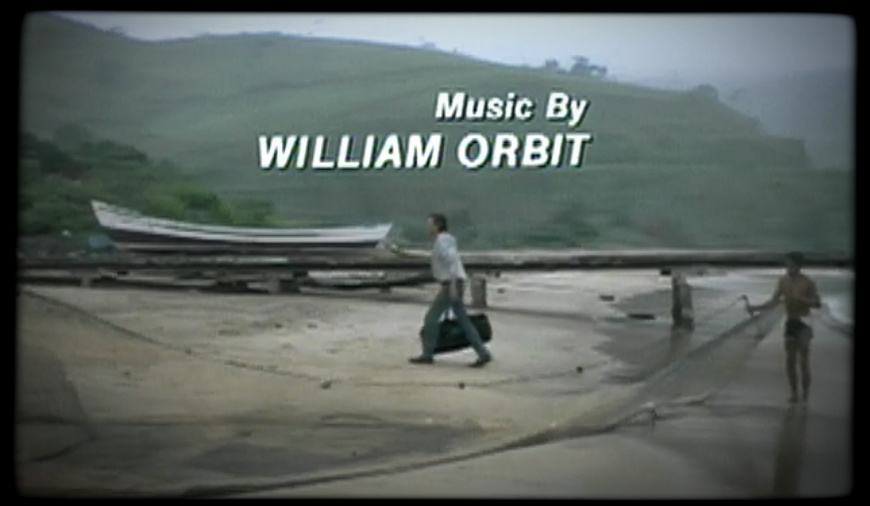 Otherwise, this film lives up to its credentials. The main man, Jim Youngs, was a nightclub manager, dance instructor and golf pro before he decided to take up acting, and nobody in the history of humanity has ever been good at all of those things. The LA Times’ weary review got straight to the point: “Though you’d certainly consider your time well spent in watching Pele play soccer and Jim Youngs act, it’s difficult to justify spending so much of it – as you do here – watching Pele act and Youngs play soccer.”

Director Rick King went on to preside over such smash hits as Kickboxer 3: The Art of War and Terminal Justice, a film described as a “cybersex action thriller”. And you suspect that both of those films are equally devoid of any wit, charm or self-awareness.

With the Championship secured, disapproving parents won over, paralysed mate avenged, Mary nowhere to be seen, and Pelé crying tears of joy over a sport he thought he’d left behind, there’s nothing more to say. It’s appropriate, then, that the supposed theme tune of this terrible film – “The Ultimate Goal” by Terry Brock – manages to do such a spectacular job of saying absolutely nothing:

All you need is one chance to play

To prove what you know

But that chance has been taken away

And there’s nothing to say

Every need in life must be supplied

But this burning heart can’t be denied

Nothing can stand in the way

Is never too far away

It burns in your soul

Until you become a vision

And live the moment you know