After promotion to the Premier League, successful Championship clubs have two choices: Keep the core of the squad the same, relying on cohesion and familiarity while adding one or two star players; Or get the chequebook out, restructure the squad entirely with proven, experienced quality from all over Europe, and rely on them to gel quickly. Fifteen signings and £35m later, Watford sit 12th after eight games in England’s top flight, boasting the joint best defensive record in the division. It’s fair to say they’ve gelled pretty quickly.

The Hertfordshire club take the term ‘managerial merry-go-round’ to a whole new level. On October 7, 2014, Slavisa Jokanovic was their fourth appointment in five weeks after Giuseppe Sannino, Oscar Garcia Junyent and Billy McKinlay all headed for the exit door. And, of course, he’s now gone as well. But despite the club’s managerial strategy resembling an episode of The Apprentice, owner Gino Pozzo and the board appointed Quique Sanchez Flores in the summer and haven’t looked back since.

Sanchez Flores has a colourful resume, boasting a playing career with the likes of Valencia, Real Madrid and Zaragoza, in addition to managing in Portugal with Benfica, Spain with Getafe, Atletico Madrid and Valencia, not to mention Qatar and the UAE with Al-Ahli and Al-Ain. In his first press conference, the Spaniard was eager to state his delight at the prospect of managing in the Premier League. “I am very happy because it is a dream come true and I am happy to be at Watford. This is a family club and a big moment for me. This is the moment for me to start in the Premier League, a league that I admire and love. So thank you Watford for giving me the opportunity here and I will try and give my best to the club in the future.”

With a new manager appointed, the focus turned to signings. Sebastian Prodl, Miguel Britos, Allan Nyom and Giedrius Arlauskis were all brought in on free transfers from Werder Bremen, Napoli, Udinese and Steaua Bucharest respectively, along with Nathan Ake from Chelsea, Victor Ibarbo from Roma and Alessandro Diamanti from Guangzhou Evergrande coming in on loan. They didn’t stop there. Etienne Capoue was signed from Tottenham for £6m, as well as Jose Jurado from Spartak (£5.5m), Obbi Oulare from Club Brugge (£5m), Steven Berghuis from AZ (£3.5m), Valon Behrami from Napoli(£2m ) and Jose Holebas from Roma (£1.5m). Despite the fact that the squad contains 22 different nationalities, Flores insisted that everybody at Watford was united and that the multicultural dressing room could play to their advantage.

On the opening day of the season, Watford travelled to Goodison Park and set up in a 4-4-1-1 formation. Gomes was selected in goal, with summer signings Nyom, Prodl and Holebas completing the back four alongside Cathcart. The midfield was made up of Miguel Layun and Ikechi Anya on the wings, almost playing as wing backs with the impressive duo of Capoue and Behrami in the centre. Playing in the hole was the tricky Jurado, behind last season’s top scorer Troy Deeney. 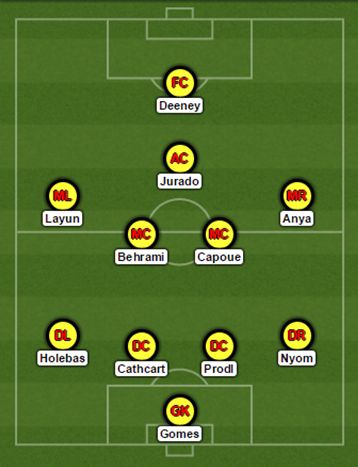 Despite six summer signings starting the game, Watford showed no signs of confusion. Well organised in defence with their two banks of four, Anya and Layun nullified any space in the wide areas, while Behrami stuck to Barkley like a rash. In the 13th minute, the away side took the lead when Deeney’s size caused Stones and Jagielka problems following a Jurado cross, and Layun was allowed to strike sweetly into the corner after the ball broke to him on the edge of the area. After doing so well to contain Everton, it took a Barkley rocket to even things up, before Ighalo put Watford ahead again in the 83rd minute. The Nigerian is very slippery in the opposition penalty box, and after putting both Coleman and Stones on the floor he drove a crisp strike into the back of the net. A Kone equaliser moments later denied Watford victory, and while they would have been disappointed not to have taken all three points, this was a hugely encouraging display for the rest of the season.

At home to high flying Swansea on September 12, Flores deployed his side in a 4-2-3-1 formation. The experienced Gomes continued in goal, with Nyom, Prodl and Cathcart all retaining their places apart from Holebas who was replaced at left back by Anya. The two tasked with screening the back four and recycling the ball were Behrami and Capoue, with Jurado out on the left and Almen Abdi on the right in more attacking roles. Behind the striker was Deeney in a target man role, tasked with supporting the dangerous Odion Ighalo who was given a start after some impressive cameos off the bench. 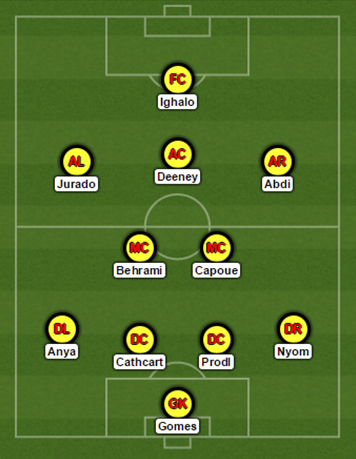 Watford again showed what a difficult side they are to break down, limiting Swansea to just three shots on target throughout the 90 minutes, with Gomes only really troubled for one of those. Deeney and Ighalo’s blossoming partnership is becoming more evident week by week, and the two would again link up for the opening goal. A long kick from Gomes towards Deeney drew three Swansea defenders towards him, who then nodded down towards his strike partner who had intelligently exploited the open space to fire home. Route one, but effective. Following a horrible Behrami stamp on Andre Ayew, Watford were forced to play with ten men for the final half an hour and were determined and resilient in their defending. Prodl and Cathcart were heading every cross clear, whilst Nyom provided an excellent out ball on the right hand side. Capoue was again excellent in midfield, and Gomes a commanding presence (seriously) in the box. Another impressive performance from Sanchez’s men, as they collected three points against one of the league’s form teams.

On October 3, Watford travelled to Bournemouth and decided to play in a 4-4-2. Gomes was again chosen between the sticks, with Nyom, Prodl and Cathcart also starting for the eighth consecutive match. At left back was Chelsea loanee Nathan Ake, as Flores continues to search for his first choice in that position. In midfield, Abdi and Anya were tasked with providing width for the side, with Capoue alongside the well rounded Ben Watson coming in for the suspended Behrami. Up front were Deeney and Ighalo, who had been combining well of late and could certainly cause the home side problems. 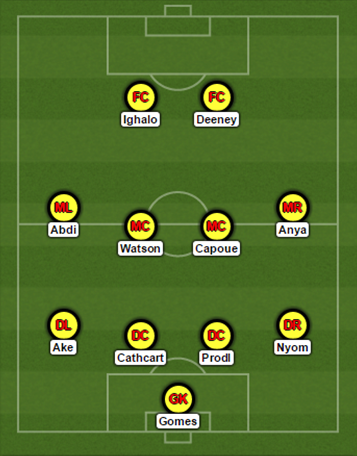 This was a match of two promoted sides with contrasting styles. Bournemouth play fast and intricate possession based football, while Watford prefer to keep it simple in midfield and play to their strengths – finding Deeney’s forehead and getting runners to spin off him. It was Bournemouth who took the lead in the 28th minute from a Glenn Murray header after he found himself free in the box, a rare mistake from the Watford back line. Watford as a team do not tend to press, but Ighalo does. When out of possession, they sink back into a 4-5-1 formation and just leave Ighalo to bother the opposition defenders. It paid off in this match after the Nigerian pounced on a slack pass from Bournemouth keeper Artur Boruc to pass into an empty net. That’s five in eight games for the former Udinese striker this season, a more than respectable total considering that he was not seen as a first choice option at the start of the campaign. Nyom and Capoue were again standout performers, as the Hornets earned an important point.

At the beginning of the season, survival was Watford’s aim and this looks a likely outcome. Ahead of their weekend match with Arsenal, Sanchez Flores hailed the longevity of Arsene Wenger’s reign at Arsenal, and while it’s difficult to see the 50 year-old sticking with Watford for nearly twenty years, it seems to be working for now and they will be quietly optimistic of breaking into the top half of the table as the season goes on.