Undefeated in qualifying. Top of Group B. Two goals conceded, the joint lowest total, with Romania, of 53 nations. Edging ahead of second, four points above third and seven clear of fourth with two games left to play. The tickets are in the basket. They can almost smell the freshly baked pastries. Who are these resolute men? Who should Europe be looking over their shoulder for? Erm…Wales.

Y Dreigiau have only qualified for a major international tournament once in their history, when they reached the quarter-finals of the 1958 FIFA World Cup. It’s been a long wait. 57 years of waiting, to be exact, filled with disappointment, unfulfilled ambitions and heartbreak. But now, the third oldest international team, ranked 8th in FIFA’s latest world rankings, are on the verge of qualification into the European Championships. They need only one point.

After their failure to qualify for the 2010 World Cup, John Toshack left the side leaving his assistant coach Brian Flynn in charge. After two games and two defeats, Gary Speed was appointed in early 2011 and they haven’t looked back since. After a slow start, four wins in succession saw Wales jump from 117th in the FIFA world rankings to 45th. The desire was back in the side, the fans were behind the team again and on December 21, 2011, the day of the final FIFA rankings of the year, Wales were awarded the title of ‘Best Movers’ of the year having gained more ranking points than any other nation in 2011. Progress. Tragically, Speed’s last game as manager of Wales was November 12, 2011, an emphatic 4–1 home win over Norway.

Taking over from Speed was Chris Coleman, who not only had to live with raised expectations, but build on them, and all while counselling a heartbroken squad and mourning the death of his friend. In his first press conference in charge, Coleman stated that it would be “the most difficult press conference I’m ever likely to do”, but he concluded that “Gary was the manager of Welsh football and of course we want to continue his legacy.” After an understandably slow start, Coleman has taken Wales out of the darkness with a young and rapidly maturing team that is now ready to perform on the big stage.

While Speed and Coleman have been extremely influential figures in this Welsh success, you cannot overlook the impact of Gareth Bale. The man from Cardiff is the most expensive player in the world, and has been awarded the Welsh Player of the Year award four times in a row. Since his rise to prominence in 2012, Bale has scored 18 goals in 52 appearances for his country, playing on the left, right and even as the central striker. Throughout qualifying for Euro 2016, Bale has scored six and assisted two of Wales’ nine goals. The 26 year-old could succeed where the likes of Ian Rush, Mark Hughes and Ryan Giggs all failed – by starring in a successful Welsh qualifying campaign.

However, for all of Bale’s strengths, Wales are a team. A group of players who are honest, hard working, motivated for each other and for their manager. The likes of Hal Robson-Kanu, Chris Gunter, Dave Edwards and Andy King are playing far beyond what is expected of them and don’t look out of place amongst the best in Europe.

In their first Euro 2016 qualifying match away to Andorra, Wales set up in a 4-4-2 formation. In goal was Wayne Hennessey, with a back four of Ben Davies, Ashley Williams, James Chester and Gunter ahead of him. Star man Bale occupied the right hand side, with Swansea left back Neil Taylor playing slightly further forward than normal in left midfield. Centrally, were the tidy Joe Allen and energetic King, with Ramsey playing in and around Simon Church up front. 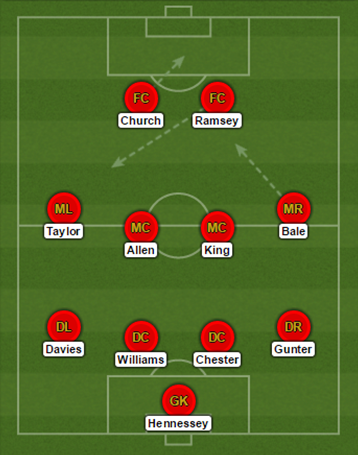 With only six minutes on the clock, disaster struck after the home side were awarded a soft penalty. Andorra’s all time top goalscorer Ildefons Lima tucked the ball into the corner, sending Hennessey the wrong way. Going a goal down kicked Coleman into action, as Gunter and Ramsey were moved into a midfield five, with Bale pushing further forward partnering Church up front, creating a 3-5-2. The pro-active tactical switch paid dividends, as Davies provided a teasing cross from the left that allowed Bale to beat his marker and head firmly into the corner shortly after. The Real Madrid winger is often Wales’ go-to man, and he was again the instigator for success after whipping a trademark free kick into the top corner with ten minutes left to play. Off the mark and blushes spared, in what would prove to be a huge three points.

In a first vs second clash against Israel on March 28, the team were set up in a defensively minded 5-3-2 formation. The back line again featured Hennessey in goal, with Davies, Williams and James Collins as the more central defenders of the five. In the wider areas were Taylor and Gunter, tasked with providing width when attacking but tucking in when defending, nullifying any space for the Israeli’s to work in. The midfield three were arguably the strongest options available to the manager, with Joe Ledley sitting slightly deeper than Ramsey and Allen, whilst Robson-Kanu was joined by Bale up front. 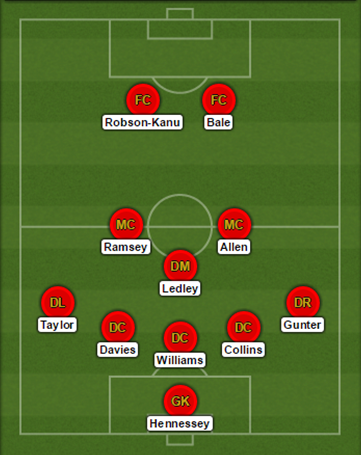 Ramsey and Bale were linking well and creating chances early on, and they would prove to be the match winners in Haifa. The deadlock was broken in first half injury time, after one long goal kick found the head of Bale, who then found the head of Ramsey to loop a brilliant effort over the keeper after a late run into the box – a trait of his seen so often for club and country. The away side smelled blood, and went 2-0 up through another incredible free kick from Bale, as he fired in from 20 yards despite Israel putting a defender on the line. The 26 year-old flourishes in this free role, and while he may steal the headlines, credit must go to the other players for their incredible work rate which allow him to do so. A third was scored late on by, you guessed it, Bale, running onto a pass from Ramsey and smashing past the goalkeeper from just inside the area. A disciplined yet clinical performance from the men in red, structured around their two star men who duly delivered.

Unbeaten in their previous six, against Cyprus on September 3, Coleman decided to deploy a 3-4-2-1 formation. Hennessey continued in goal, with Ashley Williams as the main centre half flanked by Davies to left and Gunter to his right. In midfield, Taylor and Jazz Richards occupied the wide areas as wing backs, with Edwards and King providing industry in the centre. Undoubtedly, the two most creative and influential players for the Welsh are Ramsey and Bale, and they were given attacking freedom slightly further forward, sitting just in behind the selfless Robson-Kanu playing as the lone front man. 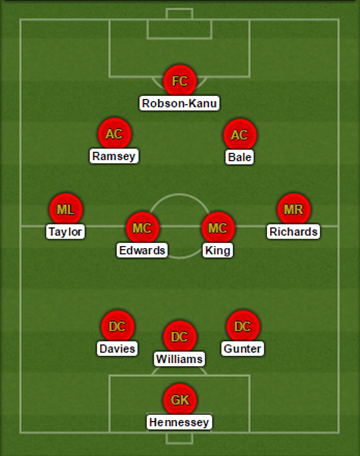 On a dry and difficult pitch in the scorching Cypriot heat, this was a cagey affair. After Ramsey curled an effort just over and Collins missed from all of six yards, nerves began to set in. Davies and Williams were excellent, heading clear any crosses coming into the box, and Edwards and King were constantly pressing the opposition in midfield. After Georgallides kept out a nice Ramsey effort with ten minutes left to play, it seemed it wasn’t going to be Wales’ day.

Here’s where the wing backs in the 3-4-2-1 earn their money. 81:00. Ramsey, drifting wide and surrounded by three players, dinked a lovely pass into the path of Richards who made an intelligent run off the ball. After a quick look up, the Swansea man crossed a lovely ball into the back post where Bale met it like a stream train, and smashed a header high into the net. Their talisman wins them all three points when only one looked likely. They top Group B with three games left to play.

With Bosnia to face in Zenica on October 10, followed by Andorra at Cardiff City Stadium on October 13, everybody associated with Wales will be hopeful of gaining that last crucial point. With a group keen to continue Gary Speed’s legacy, Robson-Kanu has stated that qualification will be the perfect tribute to their late former manager. “Throughout the special moments we’ve had during the campaign, we’ve remembered the impact Speedo had when he came in. That will never be forgotten.”

Gunter has also spoken about remaining professional and seeing the job through. “We’ve worked so hard for so long, it’d be a massive mistake to get complacent and think the job is done. If we start thinking we’ll be celebrating on Saturday night we’ll be caught out. It’s a really tough game. We have done well because we’ve always prepared in the right way. Until we’ve qualified we have to concentrate as anything can happen.”

Should Wales qualify, it would mark a most sensational achievement that has been spearheaded not by individuals, but by a group intent on proving that the real story has only just begun.