They stand proudly at the top of their table, played six, won six. They are, along with England, the only nation to boast a 100% record in the European Championship qualifiers. They are three points clear of their nearest challengers, six clear of the team in third, and there are only four games left to play. Who is this colossus of the continent? Who is it that makes Europe tremble? It’s Slovakia.

On September 3, 2015, FIFA released their most recent world rankings. Slovakia were 15th, above the likes of Italy, France, Uruguay and Switzerland, having been as low as 71st just four years ago. So what has changed in Slovakia? Why have they suddenly become a force in European football?

Slovakia is a nation of just 5.5 million people slap bang in the middle of Europe. It is bordered by the Czech Republic and Austria to the west, Poland to the north, Ukraine to the east and Hungary to the south. Traditionally, football is seen as the second most popular sport in Slovakia behind ice hockey, though this may change if the national team keep winning. In the past, it’s fair to say that they haven’t yet pulled up any trees. After regaining independence in 1994 (they were previously under the unified nation of Czechoslovakia), they have never qualified for the European Championships and have only qualified for one World Cup, in 2010. That’s changing now and you can now find Slovakians all across Europe’s top five leagues in spite of their less than glamorous domestic championship. 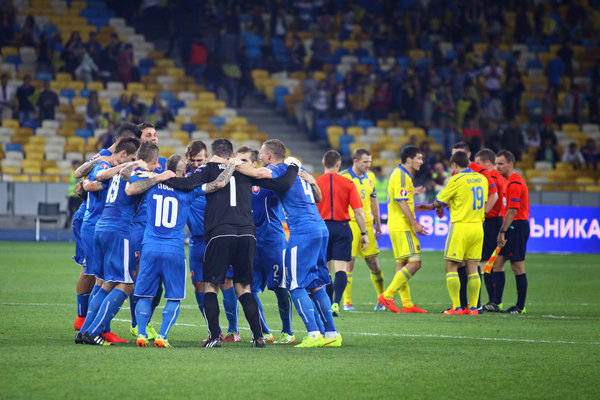 On February 23, 2014 the qualifying draw for Euro 2016 put Slovakia in with Spain, Ukraine, Belarus, Macedonia and Luxembourg in Group C. Before a ball had even been kicked, they were only third favourites to progress from the group but manager Ján Kozak was hopeful and philosophical in his reaction, saying that, “fortune favours the brave.”

They’ll need to be very brave on Saturday. They travel to Oviedo this weekend to face the reigning European champions Spain and if they can repeat their victory over them back in October last year, qualification will be breathtakingly close. But they have problems.  Martin Škrtel and Juraj Kucka are suspended, while Ján Ďurica and Vladimir Weiss Jr, both regular starters over the last year or so, are injured.

Kozak, the brains behind this new revolution, is very much a man of his country. After a successful playing career in the Slovakian SuperLiga as a player for FC Lokomotíva Košice and Dukla Prague, he turned to management in 1990. In 1993, he was appointed as the manager of his beloved Lokomotíva Košice before he was dismissed in 1995 after a poor run of form and disciplinary issues. Brief spells in charge of Michalovce, Ličartovce and Košice again earned him more valuable experience before he was appointed as the manager of the Slovakian national team in 2013. He may not have a glittering CV, but 14 wins, three draws and three losses since his appointment speaks volumes.

So what else has changed? The fortunes of Marek Hamšík, that’s what. The mercurial playmaker, a four-time winner of the Slovak Footballer of the Year award, has often been thought of as Slovakia’s greatest-ever player. However, after sparkling for Napoli since his move from Brescia in 2007, he has regularly been criticised for being unable to replicate his domestic form for the national side. Kozak, since taking over has emphasised his willingness to give Hamšík freedom on the pitch, and is reaping the rewards as the 28 year-old is Group C’s joint-top scorer with three goals, alongside Ukraine’s Andriy Yarmolenko and Spanish duo Paco Alcacer and David Silva. 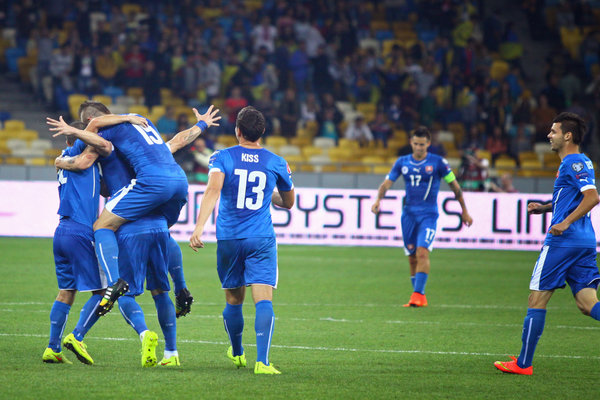 Not only has Kozak helped Hamšík, but he’s been good for captain Škrtel and AC Milan’s Kucka too, both of whom have been crucial to their success. While Hamšík is relied upon heavily for a creative spark, his flexible role requires a solid spine behind him. Kucka in midfield along with Škrtel at the back provide just that. Talented wide players Vladimir Weiss, Robert Mak and Miroslav Stoch haven’t quite fulfilled their potential at club level, playing in Qatar, Greece and Turkey respectively, but they offer real width and speed going forward in addition to competently carrying out their defensive duties. Kozak has changed the attitude of his players and their playing style, which has become more courageous and fluid. Players respect him and believe in his decisions, which tends to be a recipe for success.

During his Chelsea days, Claudio Ranieri was accused of over-rotating his squad, picking up the nickname of “the Tinkerman” from the British media. While Kozak doesn’t rotate his players as often as Ranieri did, Slovakia’s formation is changed almost every matchday to suit their opponents. In six games throughout qualification, ‘Repre’ have used four different variations of the 4-2-3-1 formation, including the occasional deployment of Hamšík as a centre-forward rather than as a playmaker.

In their opening qualifying fixture away to Ukraine, Kozak set up his men in a defensive 4-2-3-1, almost imitating the 4-4-1-1 formation with the wide players tucking in to help nullify the threats of Andriy Yarmolenko and Yevhen Konoplyanka. 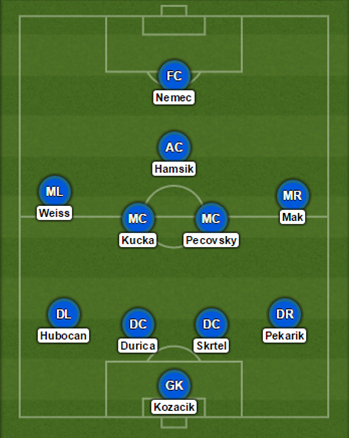 The midfield pairing of Kucka and Pecovsky were disciplined and energetic in their defensive work, whilst Hamšík was given the free role in support of target man Adam Nemec to provide a threat going forward. The decision to play with Weiss and Mak out wide hinted at Slovakia’s plan to play on the counter, and this was the case, as the only goal of the game came as a result of a quick break in the 17th minute. Once they scored, Slovakia defended deep and in numbers to grind out the victory, a characteristic rarely seen before in the side. This would be a sign of things to come.

On October 9, 2014, their biggest test would come at home to Spain. Having just won in Kyiv, spirits were high in the Slovak camp, but Spain had also just beaten Macedonia 5-1 without breaking sweat. A very narrow 4-1-4-1 was the formation of choice for Kozak, playing Hamšík as the furthest man forward but still keeping pace on the wings in the form of Weiss and Mak. Three defensively minded midfielders were chosen to screen the back four, with 23 year-old Norbert Gyömbér, currently on loan at Roma coming in to play alongside the regular pairing of Kucka and Pečovský. 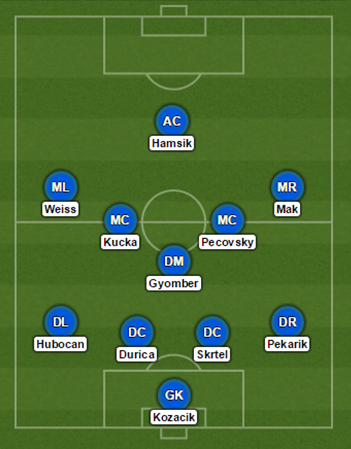 Despite having only 34% of possession, Slovakia won the game 2-1 with a late Stoch goal. Kozak’s side knew how they wanted to play, and they executed their plan to perfection allowing the Spaniards only four shots on target throughout the whole 90 minutes. Defending and attacking together as one cohesive unit, they took their chances when they came (with some help from a out of form Iker Casillas) and thoroughly deserved their win. This was a huge shock to many, but from this point onward people would start taking Kozak and his men seriously.

Belarus would provide another challenge for Slovakia, who had set up in an awkward 5-1-3-1 formation. The onus was clearly on Slovakia to attack, and attack they did. Again, using the core elements to a 4-2-3-1, slight changes were made which saw Hamšík virtually playing as a second striker, while Kucka was asked to join the attack as regularly as possible leaving Pečovský as the only sitter in midfield. 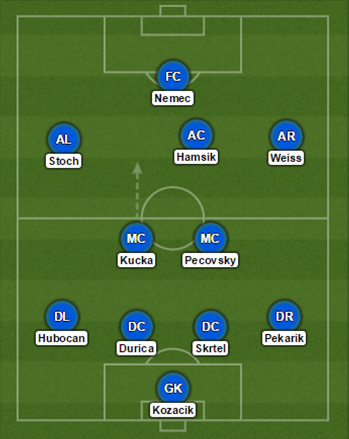 Despite surrendering possession, Kozak’s men were full of spark and intent going forward, winning the game 3-1. Their clever movement and clinical finishing would prove to much to handle for Belarus, as Hamšík scored two goals in a man of the match performance that the whole of Slovakia had been yearning for from him. When they need to defend, they can defend, but they are more than capable of playing some beautiful and effective football should the roles be reversed.

For their upcoming fixtures against Spain and Ukraine, the manager has called up players based in 13 different countries. This variety of experience and talent is also related to the team’s success. There are one or two key men; Hamšík, for example, would start for most of the international sides in Europe. But Kozak’s side is a very much a collective where the likes of 32 year-old Žilina midfielder Viktor Pečovský, who has only ever played his club football in Slovakia, or Ľubomír Michalík, now with Dunajska Streda following spells in the English lower leagues and in Kazakhstan, are given regular opportunities and made to feel as valued members of the squad.

With those key suspensions and injuries, this will be a big ask for Slovakia, but any result other than defeat will be a huge success. Regardless of what happens here, if Slovakia can take anything from their clash with Ukraine in Bratislava next week, that would almost secure qualification and mark a most sensational achievement.

You can watch Spain vs Slovakia on Sky Sports 5 on Saturday, September 5 at 1945hrs