March 14, 2015. Leicester City look dead and buried in the Premier League after a 0-0 draw at home against Hull. Rock bottom, seven points from safety with only nine games left to play. Only a miracle could save them. And so it came to pass. A remarkable run of form saw them pick up 22 points from a possible 27, surging to safety as the season ended.

But despite his heroics, manager Nigel Pearson was relieved of his duties in the summer, paying the price for a number of controversial incidents that had punctuated an extraordinary year. Stepping up to replace him was one Claudio Ranieri, quickly written off by the British press (this website very much included) after a disastrous tenure with the Greek national team. But as September draws to a close, Leicester are fourth and they’re the only unbeaten side in the Premier League.

So just what are Leicester doing so differently, and what has changed since last season?

One characteristic that instantly stands out is that Ranieri, nicknamed ‘the Tinkerman’ during his spell at Chelsea for his tendency to  rotate, is tinkering no more. Riyad Mahrez, Jamie Vardy, Richie de Laet, Danny Drinkwater, Jeffrey Schlupp, Robert Huth, Wes Morgan and Kasper Schmeichel have all featured in every league match since the start of the season. “If you change everything too quickly you lose points,” said Ranieri. “Slowly, slowly, we are changing but not everybody knows how.” Knowing how to rotate your squad, especially with the frantic demands of the modern game, is a skill in itself. But Ranieri knows the old phrase, ‘if it ain’t broke, why fix it?’, and at the moment, Leicester definitely ain’t broke.

Another significant factor behind the Foxes’ great form is their Algerian star on the right wing. Mahrez plays at his own tempo, improvising with a jazzy freedom to devastating effect. As the man Leicester look to for inspiration in the final third, he is flourishing under the responsibility of his new role and is clearly enjoying his football under Ranieri.

“He helps us a lot tactically so I’m getting better tactically,” he said. “We needed that. And he has given me a lot of responsibility and confidence. He tells me: ‘Just go create things. I would never change your game. I like how you play.’” Undoubtedly the form player in the division, the 24 year-old has completed 25 take ons, created 15 chances (second only to Mesut Ozil on 22), scored five goals and added three assists. Not bad for £350,000.

Tactically, Pearson flirted with the 4-3-3 and 4-2-3-1 formations last season as he struggled to find his best eleven, until the bold choice to opt with a 3-5-2 inspired their late run of form. This season, Ranieri started with a 4-4-2 on day one and has pretty much stuck with it ever since.

Away to West Ham on the second game of the season, Leicester were unchanged from their opening day win against Sunderland. What’s interesting about the way they attack is how their 4-4-2 almost becomes a 4-2-4, with Mahrez and Albrighton constantly given the license to get forward. In Vardy and Shinji Okazaki, Ranieri has two strikers who are perfect for his system as they are quick, able to run the channels well but also capable of holding the ball up for onrushing midfielders looking to support from deep. 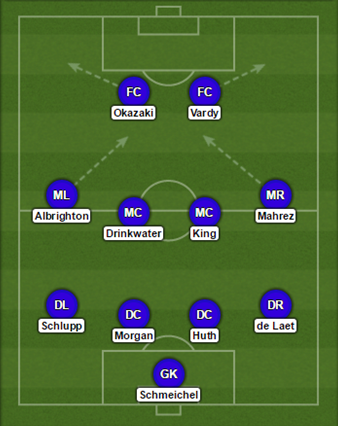 After containing the game for the opening stages, Leicester’s counter attacking game was beginning to hurt the home side. The fluidity between the front four of Okazaki, Vardy, Albrighton and Mahrez was the deciding factor of this game, as West Ham struggled to know who to pick up. Swapping wings, dropping deep and with some clever exchanges around the area, Ranieri’s men were clinical and delivered their knockout punches before half time.

Two weeks later, their set-up away at Bournemouth was slightly different to the usual 4-4-2 they had been using. Using the base of a 4-1-4-1 without the ball, it would turn into a 4-4-2 when attacking as Mahrez would join Vardy in the attack, meaning Drinkwater moving out to right hand side and King coming into the centre. 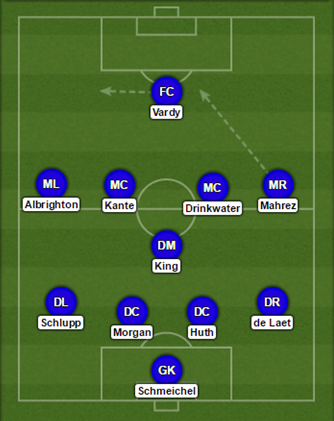 The idea behind this 4-1-4-1 was to congest the space in the middle of the park, negating the pace of Callum Wilson and Max Gradel on the break. However, in doing so, Leicester were not able to support Vardy quickly enough when chances for their own counter attacks came their way. Ranieri switched things up, bringing Mahrez and Albrighton off for Okazaki and youngster Joe Dodoo, moving into a 4-3-3. This was an inspired alteration by the Italian, as Vardy equalised with five minutes to go and they could have easily won the game after a late penalty appeal was turned down. When they get numbers forward quickly, they are an attacking force who could trouble any defence in the league.

Ranieri has nicknamed his team the ‘RAF’ and said, “It is fantastic. I enjoy watching my team. Sometimes it is like ‘whoosh’. I love it.”

At home to Aston Villa on September 13, Ranieri again went with his preferred 4-4-2 formation. After struggling to create any real openings, Jack Grealish put the away side ahead just before half time with a sweet strike. This prompted another proactive change from the Leicester boss as he brought on Nathan Dyer for Okazaki, moving him to the right hand side and drifting Mahrez in field. With space and defenders to run at, the Algerian instantly looked more dangerous as the home side grew into the game. 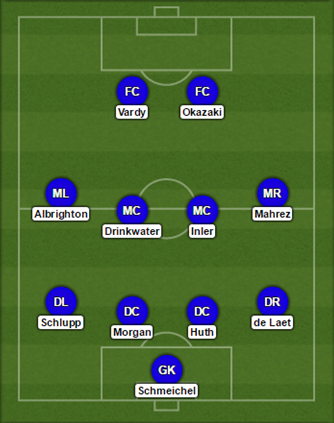 Completely against the run of play, Leicester found themselves 2-0 down after a Carles Gil wonder strike, as Ranieri gambled again. On came Leonardo Ulloa and N’Golo Kante for Gokhan Inler and Albrighton, moving Vardy to the left, Ulloa up front and Kante in midfield with Drinkwater. Aston Villa’s defensive naivety certainly helped their cause, but three goals in just under 20 minutes saw Leicester 3-2 victors at the full time whistle, inspired by the tactical changes of their manager and a man of the match performance of Mahrez.

While the 4-4-2 is their go-to formation, the ability to change things in game has been crucial for Leicester this season, and is testament to Ranieri’s judgement.

Not only are Leicester blossoming on the field, but off it as well. The King Power stadium is everything you would want a home ground to be. Tribal, loud and united. This is our house and you’re not leaving here with anything. After their comeback against Aston Villa, Vardy spoke after the game in full acknowledgement of the Foxes’ faithful.

“You heard the fans against Villa, they were non-stop for 90 minutes and it gives us that extra gear that we need. Especially when we are getting a bit tired but you want to carry on, not just for the team but for the fans as well.” This weekend’s draw against Stoke was the fourth time in consecutive matches that Leicester have come from behind to prevent a defeat, a perfect example of the spirit in the team.

Since taking over in 2010, the Srivaddhanaprabha family have brought tangible progress under both Pearson, and now Ranieri. They have backed their managers with funds, as shown with the signings of Andrej Kramaric (£9m) and Okazaki (£7m) and Kante (£5.5m), but have also encouraged an intelligent scouting network which has resulted in Mahrez (£350k), Cambiasso (free) and Vardy (£1m) all coming into the club and playing key roles. There have also been efforts to revamp the youth academy and the stadium, in addition to subsidising tickets for travelling fans.

Nobody is backing Leicester for Europe, or to challenge for the top four. But quietly, the ambitions of the owner, the manager, the squad and the fans are fusing to create something really special. Many were shocked by the series of events which lead to Ranieri’s appointment, but the decision has vindicated as slowly but surely, the club are ticking off objective after objective. Nobody knows what Ranieri and his men could achieve this season, but they’ve certainly started well.