Fiorentina. La Viola. The men from Florence top the table for the first time since February 1999, after heading to the home of the league leaders and playing them off the park. With only one piece of silverware in 15 years, the club founded in 1926 have been through bankruptcy, player protests and demotion to Italy’s fourth tier, but are now back where they want to be. At the top. After 10 wins in their last 11 Serie A matches, 26 goals scored and only nine conceded, they are a force again and are showing no signs of slowing down.

8 June 2015. Vincenzo Montella was sacked by Fiorentina after ‘causing a breakdown in trust’ following a desire to break from his contract despite signing an extension just two years ago. The Italian took charge of Fiorentina in 2012, guiding them to three successive fourth-place Serie A finishes and the 2014 Coppa Italia final, not to mention a Europa League semi-final where they were beaten by eventual winners Sevilla. But after burning bridges with the board and a situation that created plenty of confusion amongst the fans, in came former Portuguese international, Paulo Sosa. The 44 year-old is relatively untested at the top level, but led Maccabi Tel Aviv to the Israeli Premier League title in 2014 before claiming the Swiss Super League crown in his one and only season at Basel.

Unable to compete with the likes of Juventus, Roma, AC Milan or Inter Milan financially – the club had to be clever in the transfer market, and clever they were. After losing a lot of experience in the likes of Alberto Aquilani, David Pizarro, Juan Manuel Vargas, Mario Gomez and Stevan Savic, business needed to be done. In came Mario Suarez from Atletico for €15m, ex-Blackburn striker Nikola Kalinic for €5m, Gilberto from Botafogo for €2m, as well as Jakub Blaszczykowski and Davide Astori coming in on loan from Borussia Dortmund and Cagliari respectively. With only €25m spent, the advantage they had over the clubs listed previously was that their key players remained. Instead of rebuilding, they were adding, and while new signings will always need time to settle, especially with a new manager coming in, there was a sense of familiarity there.

With a successful pre-season under their belts, testing the squad and a variety of formations, Fiorentina were quietly confident heading into the domestic campaign under their new boss.

After their opening day victory against AC Milan, on the second matchday of the 2015/16 season, Paulo Sousa decided to set his team up in the 3-4-2-1 formation that they had been trialling throughout pre-season. New signings Kalinic, Suarez and Gilberto all came into the starting eleven, along with the more familiar names of Josip Ilicic, Borja Valero and Gonzalo Rodriguez. 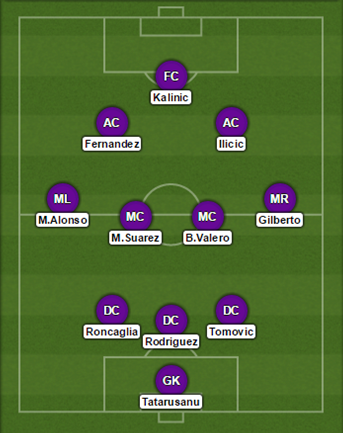 Despite taking an early lead through Marcos Alonso, Fiorentina crumbled and conceded three goals in ten second half minutes to lose 3-1. The main reason for this loss was the lack of support in central areas. With Ilicic, Matias Fernandez, Alonso and Gilberto so keen to push forward, this resulted in Mario Suarez and Borja Valero effectively being forced to handle the midfield by themselves. The 3-5-2 that Torino were playing was a far more structured system, with the Fiorentina players often leaving their position in defence to try and have an effect on the ball. Suarez and Valero aren’t naturally athletic players, and were constantly exposed by drilled passes through the lines to which Torino’s pressure finally told.

After their defeat to Torino, Fiorentina won back to back matches against Genoa and Carpi respectively, before taking on Bologna on September 23, 2015. Paulo Sousa decided to set up his side in a 4-3-3 formation, with an eleven almost unrecognisable to that of a month ago. Khouma Babacar, Blaszczykowski and Ante Rebic completed a pacey forward line, with Matias Vecino, Borja Valero and Milan Badelj forming the midfield three. The defence was slightly more regular, with Alonso, Facundo Roncaglia and Rodriguez all constants in the side, joined by Davide Astori who was on loan at Roma last season. 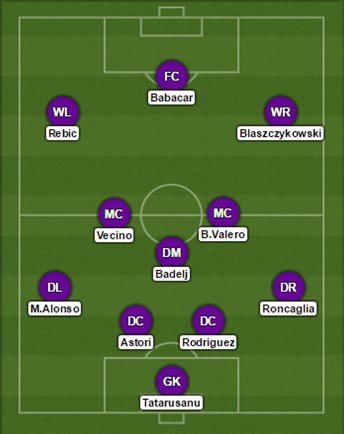 After dominating possession and creating plenty of half chances, Fiorentina’s breakthrough came with 20 minutes left to play through Blaszczykowski. A cross whipped in from a wide area caused havoc in the Bologna defence, and after a slight flick from Badelj, Blaszczykowski was able to tap in at the back post. One of this team’s greatest strengths is the width they gain via their full backs, and in Marcos Alonso especially, they have an excellent crosser of the ball who will always create opportunities with his wicked deliveries. This exact strategy was the cause of their second and final goal in a 2-0 victory. The  balanced midfield three was also a lot more solid, much more energetic and harder to pass through, showing that Sousa had learnt his lessons from their early season struggles.

Away at Inter on September 27, was Fiorentina at their best. Taking on the only side in Serie A to maintain a 100% winning record in their own backyard, they hardly broke a sweat. Sousa decided to revert back to the 3-4-2-1 formation, and after watching the match is what clear to understand why. With Alonso and Valero floating around on the left, Ilicic and Blaszczykowski driving down the right all willing to get wide and in behind, it was almost a 3-2-5 at times with bodies flying forward at every opportunity. 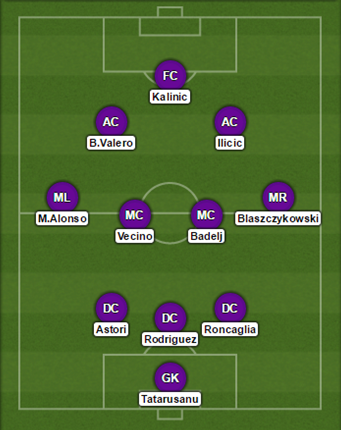 La Viola didn’t just win, they played Inter off the park. Josip Ilicic was the star of the show, drifting in from the right hand side causing Alex Telles, Gary Medel and Geoffrey Kondogbia all sorts of problems. Borja Valero was brilliant on the ball, always playing the right pass at the right time and Kalinic looked dangerous every time he got on the ball. After 23 minutes, they were 3-0 up after an Ilicic penalty and a Kalinic double as the San Siro was stunned. Fiorentina ended the match with 66% possession, and when they weren’t on the ball, an organised pressing system was executed to perfection as they forced Inter to misplace passes on a regular basis. They just couldn’t cope, and it was clear that Sousa and his men had done their research. This was a performance worthy of topping the table, as their good form continues.

After the game, Sousa was in high spirits claiming that “I told the lads from the start I want a team always ready to take on anyone, always maintaining our approach. We have principles of football that we work hard on and as time goes on this will give us more confidence going forward.” Heading into the season as fourth or fifth title favourites, they can play their game without pressure which will only benefit them. With Juventus and Roma stuttering, AC Milan looking inconsistent despite showing glimpses of their potential and big changes happening at Inter, the opportunity is there for Fiorentina to capitalise.

Still prone to crumbling should circumstances not fall their way (3-1 and 1-2 losses to Basel spring to mind), La Gigliati are playing some excellent football and have looked full of confidence in the early stages of the season. Granted, only six games have been played, and with a slightly thin squad that will need to compete in four competitions, the potential banana skins are there for Sousa’s side. But they’ve found balance, they’ve found consistency and they’ve found goals – three key ingredients as they look to bring silverware back to the Stadio Artemio Franchi.