Nine games. Nine wins. Scored 28, conceded three. Nine points ahead of second place, 14 points ahead of third place. Dominance. A perfect ten throughout qualification is on the horizon, and while the bitter taste of failure still lingers from Brazil, it is by no means as sharp now. England seem to have their mojo back.

The nation might have expected Harry Redknapp to be appointed as Fabio Capello’s successor in 2012, but instead it was the well travelled Roy Hodgson who faced the cameras on May 1, 2012. The 64 year-old was preparing to lead his country after managing 18 teams, including three national sides, in a coaching career spanning 36 years. In his first press conference, Hodgson said “Let’s hope we can get everybody behind us and make certain that we work as a team and help the team get the results everyone in England expects and wants”.

And there it is: Get the results everyone in England expects.

England have always had good squads. England have always had talented individuals. England have always had good managers. But for some reason, they always crumble when it matters most. Heartbreaking exits at Italia ’90, Euro ’96, and France ’98 seemed all so familiar, but were ultimately more disappointing because of expectations. There is always a presumption that England should do well in every international tournament they play in, which leads to heightened disappointment when they do not. Professional sportsmen and women will always need to deal with pressure. It’s part and parcel of the job. But the weight of an expectant nation on your shoulders will eventually, and entirely understandably, impact performance.

After the 2014 World Cup, something changed. Despite the poor group stage exit in Brazil, most people seemed to acknowledge the fact that this was a side in transition. There were improvements being made. Opportunities were being given to younger, hungrier players and the weight of expectation had been reduced significantly. The players are being given a chance to play and learn with each other, and instead of success feeling owed to us, there is a sense of excitement and unpredictability blossoming. Nobody knows what this side could achieve. Granted, the likes of San Marino, Lithuania and Estonia haven’t provided the sternest of tests for England, but you can only beat what’s in front of you and Hodgson’s team have done so – and with considerable style.

In their first Euro 2016 qualifying match away to Switzerland, England set up in a 4-4-2 diamond formation. In goal was Joe Hart, with a back four of Leighton Baines, Phil Jones, Gary Cahill and John Stones ahead of him. In an experimental midfield were Jordan Henderson, sitting in just in front of the centre backs with the energetic Fabian Delph to his left and the silky Jack Wilshere to his right. Playing at the tip of the diamond was Raheem Sterling, tasked with floating in and around the striking duo of Wayne Rooney and Danny Welbeck. 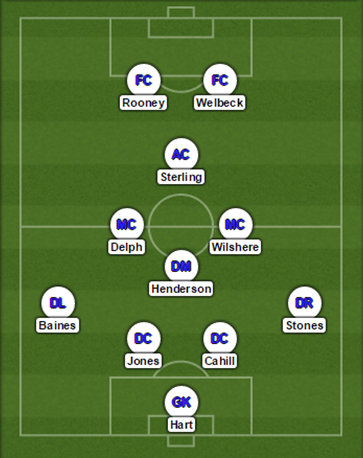 Up against a very good side, England would have to be at their best to take all three points, and at their best they were. With plans to play on the break with the pace of Sterling, Welbeck and Delph, possession was surrendered slightly, but Hodgson’s men were clinical in front of goal. The first strike came in the 58th minute after Sterling was able to pinch the ball in midfield and find Rooney, before receiving the ball back and crossing perfectly for Welbeck, who duly slotted home to wrap up the lightning counter attack. England were indebted to two vital saves by Hart from Haris Seferovic and a vital goal-line clearance from Gary Cahill, before Welbeck added another in stoppage time with a fine finish. Despite one or two defensive lapses, the victory was fully deserved and a big test had been passed.

In an awkward clash against Slovenia on June 14, Hodgson set up his team in a 4-3-3 formation. The back line again featured Hart in goal, with Kieran Gibbs, Chris Smalling, Cahill and Phil Jones forming the rest of a chopped and changed defence. In midfield, Wilshere was deployed as the deepest of three, being asked to dictate the tempo of the side, with Delph and Henderson either side of him playing in more box-to-box roles. The forward three was made up of Andros Townsend on the left, Sterling on the right and potential all time record goalscorer Rooney up top on his own. 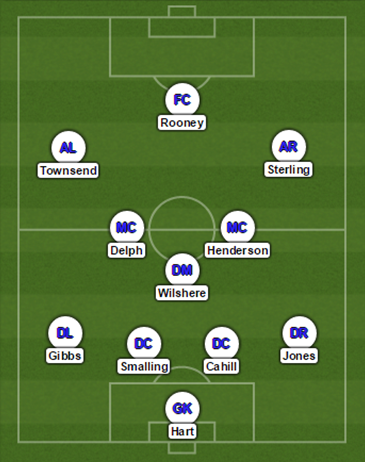 The opening half was a cagey affair, and it took 37 minutes for the deadlock to be broken by the home side. A high defensive line was exploited by the veteran striker Milovoje Nokanovic to slot past the onrushing Hart. After half time, England were a different side after Lallana was brought on for Jones, in addition to Wilshere being given license to influence the game further forward. This decision paid instant dividends after a lovely strike from the Arsenal man found the top corner with half an hour to play – his first international goal in 28 appearances. Just fifteen minutes later, England and Wilshere would have another after some lovely play link up between make-shift right back Henderson and Lallana, who smartly laid the ball back to the 23 year-old who found the very same top corner on the half volley. Slovenia equalised through Pecnik after Gibbs was beaten in the air at the back post, before Rooney pounced on a defensive error to score the winner late on.

Before the match, Hodgson said that he was not concerned about the manner of the performance so long as it brought the win. But despite some slick passing and lively attacking, some poor defending caused concern.

With qualification secured following eight wins from eight, England set up in a 4-2-3-1 formation for their meeting with Estonia last week. Hart continued in goal, with Ryan Bertrand and Nathaniel Clyne coming in at left and right back as Smalling and Cahill continued in the centre of defence. An unfamiliar partnership of Ross Barkley and James Milner formed the deeper midfield pivot, with Sterling, Adam Lallana and Theo Walcott playing slightly further forward. Up front was Harry Kane, starting in the absence of Wayne Rooney because of injury. 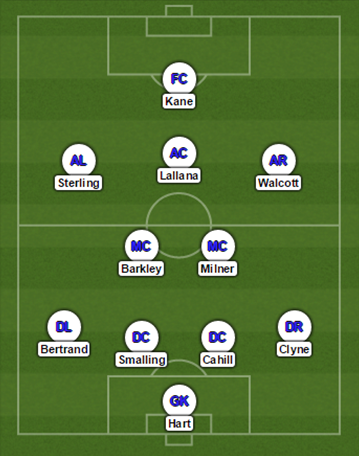 In a match where the two centre backs, along with Milner, remained disciplined in their defensive duties, England could try a few things. Barkley relished the responsibilty of his midfield role and often demanded the ball, with Sterling and Walcott looking dangerous throughout the 90 minutes and constantly running at the Estonian defence. Lallana enjoyed the freedom behind Kane, who worked hard throughout even if he did not manage to score. The first goal came through Walcott, whose clever run was found well by Barkley as he tucked away into the corner. Walcott is a confidence player, and his good form for Arsenal was a catalyst in showing us an inside forward posing considerable threat. While he can sometimes be on the periphery of games, there is no doubt that he can be a valuable weapon for this side when starting, or coming off the bench.

The second and final goal of the night came in the 85th minute, as substitute Jamie Vardy pressed Taijo Teniste before dispossessing him and squaring the ball for Sterling to score from close range. This win made it 27 points from a possible 27 and England are the only side from 53 to achieve this points tally.

Ahead of their final qualifier against Lithuania, Jagielka, who will be captaining the side, stated that “We started this campaign a while ago and the job was to try and win every single game. Normally you say that and not a lot of people expect you to do so, but we’ve put in some great performances along the way and it’s nice that we will have the opportunity to do so.”

Under Hodgson, 64 different players have been called up to the national team squad and he was keen to stress that opportunities are there for everybody. “I will happily give people a chance. Everybody knows they have to be fighting for a place in what I consider my first XI.” With the players like Vardy, Jack Butland, Shelvey and Dele Alli all in contention to start against Lithuania, this is tangible proof of the manager’s open minded attitude.

With qualification in the bag, nobody is expecting England to win the European Championships. Instead, people will simply hoping that they can do well.  That alone might just be the most important development for the country’s prospects.