You’d never have guessed that Crystal Palace were on the brink of England’s third tier just five years ago. The Eagles are a side transformed. They are not the Championship team of old, constantly flirting with the drop and losing all of their best players to the bigger fish in the pond. They are now a financially secure outfit with an ambitious manager, a squad full of international players and an owner unafraid to spend when necessary as they look to break into those elusive Europa League places.

After Neil Warnock’s sacking in late December last year, it took all of five days for chairman Steve Parish to find his replacement, bringing ex-player and Newcastle manager Alan Pardew back to South London. In his first press conference, Pardew stated that “The players need a lift. Hopefully my arrival and a couple of players will do that. Hopefully we can go on a run that gets us at least to safety. Realistically, this year, one place above relegation would be enough for us to build this club again.”

They did rather more than that. Palace picked up 10 points from a possible 15 in Pardew’s first five games, surprising many to finish in tenth place after looking set for another relegation battle just a few months earlier. This season, they sit in 4th place after eight games, winning five, losing three and playing some entertaining football in the process. In spite of the criticism he received at Newcastle, the Pardew is a capable manager and started well in the north east, in addition to decent spells at Reading, West Ham and Southampton, even if he did depart each of those clubs in somewhat sour circumstances.

The club record £10m capture of Yohan Cabaye from PSG this summer was inspired. He is the perfect example of the direction Pardew and chairman Steve Parish want to take the club. Playing vibrant, attacking football with the tricky Yannick Bolasie and Wilfried Zaha on the wings, with Jason Puncheon pulling the strings in midfield, Palace are a match for anybody on their day. There is tireless energy and bite in midfield  from James McArthur, Joe Ledley and club captain Mile Jedinak who has found his first team involvement reduced as he heads into his early 30s. The experience and size of Scott Dann, Damian Delaney and Brede Hangeland at the back has also proven vital throughout the last 18 months.

On the opening day of the season away to Norwich, Palace deployed a 4-4-1-1 formation. Summer signing Alex McCarthy deputised in goal, with the familiar faces of Joel Ward, Scott Dann, Damian Delaney and Papa Souare completing the rest of the back five. In midfield, Puncheon and Zaha occupied the left and right wings, with James McArthur joined in the centre by former PSG and Newcastle man Cabaye. Leading the line was Glenn Murray, accompanied by Jordon Mutch floating just in behind. 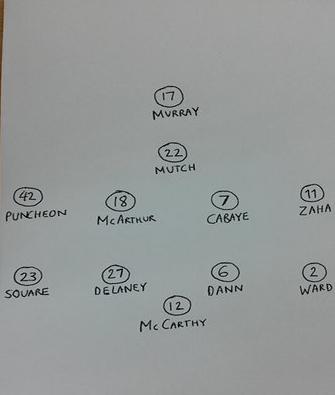 ED’S NOTE: The nice people at Lineupbuilder.com are having technical issues, but we’ve sourced replacement technology.

Palace’s plan was to absorb the home side’s possession and then to spring dangerously on the counter attack. Puncheon and Zaha were constant threats from the wide areas, and this combination would result in their first goal of the game after a right footed dink from the former was nicely volleyed home by the latter. Another feature of Palace this season has been their innovation from set pieces, as a well worked corner found Souare in acres of space to head down towards Delaney, who slotted home expertly to put them 0-2 up just after the break. Despite a long range effort from Norwich’s Nathan Redmond, Palace never looked in danger of conceding again and their perfect away performance was capped by a clinical finish from Cabaye just before the final whistle. Assured in defence but explosive on the break, this was to be the development of their blueprint for the season.

August 29 saw Chelsea host Palace at Stamford Bridge, where both sides would use the 4-2-3-1 formation. The back five remained unchanged, with Ward, Dann, Delaney and Souare all in front of McCarthy. McArthur and Cabaye were again the preferred midfield duo, providing a nice mixture of industry and technical finesse in the centre of the park. Tasked with causing issues for the champions were Puncheon and Zaha on the flanks, with new additions to the squad Bakary Sako and Connor Wickham playing as the number ten and lone striker respectively. 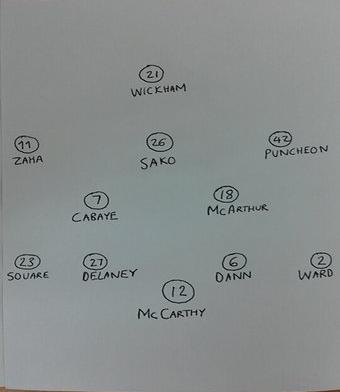 Again looking to do their damage on the counter, Puncheon, Sako and Bolasie after his inclusion in the 55th minute provided telling contributions yet again. There were clear instructions from Pardew for his men to give the ball to Bolasie as often as possible, and for the Congolese international to isolate and take on the vulnerable Ivanovic at every opportunity. These instructions paid off after a low cross from the left found Sako, who smashed the ball high into the net after a fortunate rebound. Falcao was able to draw Chelsea level in the 79th minute with a low header into the corner, but mistakes were repeated when Bolasie again found himself in possession of the ball on the left hand side. After a stepover here and a body feint there the ball was teased into the back post where Sako tapped back for Ward to head in, all just two minutes after the equaliser. Chelsea were caught cold again by the counter and Palace had executed an exemplary away performance.

Against Tottenham on September 20, 4-2-3-1 was again the formation of choice for Pardew. Martin Kelly and Brede Hangeland came into the defence alongside Delaney and Souare, with McArthur and Cabaye playing as the two deeper lying midfielders. Ahead of them in a more attack minded three were Zaha, Puncheon and Sako, in behind Yannick Bolasie playing in a slightly unfamiliar role as the lone striker. 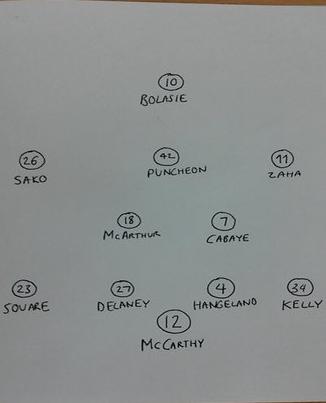 With Bolasie playing up front, Pardew’s tactical intentions were again clear as they looked to continue with what had served them well this season; the counter attack. But this time, Tottenham did to them what they had been doing to the likes of Norwich, Chelsea, Aston Villa and West Brom and broke on them repeatedly throughout the game. McArthur and Cabaye were often left to deal with four or five runners at a time after the attacking three of Zaha, Puncheon and Sako were bypassed far too easily by the energetic Spurs midfield. Bolasie, who is tricky and horrible to defend against, is not a Connor Wickham, able to hold the ball up, and Palace struggled with no obvious target man to play off. The only goal of the match resulted from a Palace corner, which was then cleared as the home side broke in numbers. Too quick for the retreating defenders, Son Heung-Min fired the ball under Alex McCarthy as Palace were sucker punched by their own game. The style in which Pardew’s men play is exciting and admirable, but this result was an example of how they can so easily be undone should their midfield not be on the same wavelength.

Nobody is expecting Palace to challenge for the top four, though given the mixed quality of the Premier League this year, you never know. But quietly, the ambitions of all those involved with the club are already paying dividends. Pardew has lifted Palace away from the threat of the relegation. If he continues to build on this impressive start, could he lift them into the Europa League as well?