February 4, 2015. Borussia Dortmund are bottom of the league. They’ve just been beaten at home by FC Augsburg and it’s their 11th defeat from 19 games. How swiftly they have fallen. Bundesliga champions in 2011 and 2012, Champions League finalists in 2013, Jurgen Klopp’s once-vibrant and mesmerising team are a shadow of themselves.

September 12, 2015. Borussia Dortmund are back at the top, albeit after only four games. They came from behind to beat Hannover away from home, they’ve maintained their 100% win record and at last, they’re back alongside Bayern Munich. Even a man as positive as new manager Thomas Tuchel could not have envisaged a better start.

Tuchel shares many similarities with his predecessor. Both were managers of Mainz before moving on to Dortmund,  both surprised many by overachieving with such an unfashionable outfit. Both are charismatic, gifted man-managers, as adept at kicking bottoms as they are putting arms around shoulders. But Tuchel knows that to succeed he must be his own man, rather than remaining in the long shadow of Klopp.

So who is Tuchel? After an uninspiring playing career with the likes of Augsburg and Stuttgarter Kickers in Germany’s lower tiers, he joined SSV Ulm in 1994, playing 69 matches in four years before being forced to end his playing days due to a chronic cartilage injury.

Tuchel’s managerial career began in 2000 as the head coach of Stuttgart’s U19 side, before he returned to his former club Augsburg where he worked as youth team co-ordinator for three years. In August 2009, after a period as U19 manager, he was named as head coach of newly promoted Mainz, his first experience of taking over at a club where former manager Klopp was revered.

Tuchel surprised many in leading Die Nullfünfer to 5th place the following season. The young manager again qualified for the Europa League in 2013/14, before asking for his contract to be terminated with one year still remaining on his deal. After initially having had his request refused, Tuchel got his way and left the club in June 2014. To this day, the precise circumstances of his departure remain clouded.

After taking a season-long sabbatical, it was announced on April 19, 2015 that Tuchel would be taking over from Jurgen Klopp at Borussia Dortmund. The 42 year-old had been out of football completely since leaving Mainz, even admitting that he barely watched the World Cup in Brazil. Tuchel claimed that he had learned to “live a little slower”, but with a new challenge facing him at the Westfalenstadion, he seemed reinvigorated. “I wanted to train a top Bundesliga club, with big tradition, that can challenge for German honours. That’s possible here.” 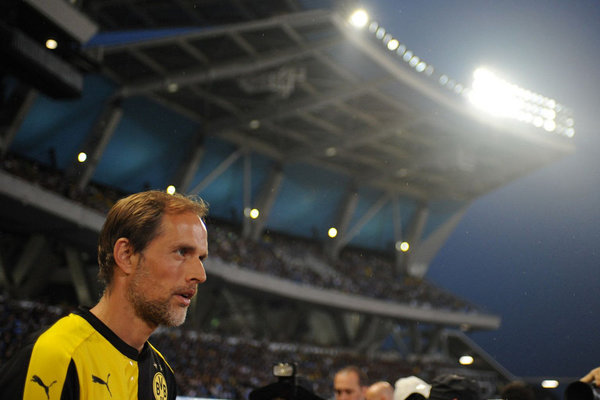 The most obvious change to Dortmund since Tuchel’s arrival has been the change in their playing style. Klopp brought Gegenpressing, a quick and intensive style which promotes constant pressure of the opposition, forcing errors and capitalising on the counter attack. This was a style which contributed greatly to their Bundesliga titles in 2010/11 and 2011/12, in addition to a DFB Pokal victory and their run to the Champions League final in 2013. However, last season’s Dortmund looked tired, uninspired and out of ideas, unable to summon up the energy for Gegenpressing , reduced to long balls fired forward from the back which couldn’t have been any less suited to the strengths of their forward line.

The change in BVB’s fortunes this season has been down to a number of factors, but the decision to go back to the basics, returning to the quick, counter attacking style of old has been an inspired one. Not only have they ripped teams apart on the break, but Tuchel’s men have shown that they are more than capable of playing a passing game as well, dominating possession in their last four Bundesliga fixtures against Borussia Monchengladbach (60%), FC Ingolstadt (61%), Hertha Berlin (54%) and Hannover 96 (72%).

In terms of personnel, Dortmund try to keep the first eleven as consistent as possible. Summer signing Roman Burki has established himself as the number one goalkeeper ahead of Roman Weidenfeller, impressing despite his relatively young ‘goalkeeping age’ of 24. In defence, Mats Hummels and Marcel Schmelzer, in particular, look like transformed players and have started every single Bundesliga match thus far. Hummels opened up about his troubles last season, stating in an interview ”I felt and looked very sluggish. My weight was a catastrophe for me. Eating became a vice for me, and because of my frustrations, I fell into a vicious circle.” But now after working with Tuchel on his diet, the 26 year-old revealed that his weight is ‘significantly lower’ and that he’s in a ‘very different shape to 2014’.

The midfield of Julian Weigl, Ilkay Gundogan, Henrikh Mkhitaryan and Shinji Kagawa, like Hummels and Schmelzer have also been ever present in the club’s early Bundesliga campaign.

Weigl, the 20 year-old summer signing from 1860 Munich has settled in quickly at Dortmund and is already becoming a key member of the first team squad. Stationed as the deep lying playmaker, his metronomic passing style combined with his ability to read and intercept danger has become invaluable to the balance of the side, drawing praise from his manager on several occasions. “Julian has made a very good impression the whole time he’s been here” said Tuchel. “He is thrilling us with his briskness and carefree attitude, but at the same time, he displays the ability to learn and to soak things up. He is a totally clear, cordial and open young man.”

After a summer exit looked likely, Gundogan surprised many by signing a contract extension and returning to the side with his injury and weight problems apparently behind him. Recapturing his stunning 2012 form, the German constantly buzzes around the pitch linking everything together. Kagawa, like Gundogan, has excelled in his new free role, floating gracefully in the final third demonstrasting incredible vision and technical ability. His spell at Manchester United was far from pleasant, but after settling back in last season, we are now witnessing the Kagawa of old. 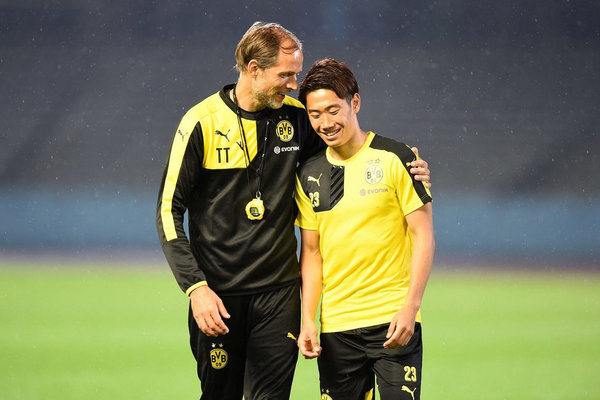 Not only is the form of  Gundogan and Kagawa a positive development for Tuchel, but so to is the resurgence of Mkhitaryan. The Armenian struggled last season only scoring five goals, but he already has nine goals and seven assists to his name in all competitions. His new role on the left wing allows him to play wide, but also drift in centrally where he is at his most dangerous. Weigl was mentioned earlier as a key figure in maintaining balance, but Mkhitaryan is also key to that as he typifies the side’s natural tendency to attack via the left, not to mention the ability to utilise his speed on the counter attack.

Leading the line is Pierre-Emerick Aubameyang, who is perfect for Tuchel’s new system. Able to run the channels well due to his days as a right winger for Saint Etienne, the Gabonese international’s speed and clever movement makes him a nightmare to defend against, andy the standard of his finishing has improved since his arrival at the the club in 2013. A threat in behind, a good free kick taker and increasingly effective in the air, the €13m fee that Klopp paid for him now looks a bargain.

Finally, there is Marco Reus. Undoubtedly Dortmund’s best player who, when available, brings an aura to the side that cannot be replicated. Technically gifted, intelligent and determined – keeping the Dortmund born midfielder fit could be the difference between silverware and sorrow at the end of the campaign. With six goals and one assist to date, his connection with Mkhitaryan and Aubameyang has been a catalyst for Dortmund’s strong early season form. The trio have combined to create and score over 50% of their goals this season.

Below is the 4-1-4-1 formation that was used against Borussia Monchengladbach on the opening day of the season. As you can see, Weigl was the deepest midfielder instructed to dictate play, which allowed Gundogan and Kagawa to push forward slightly. Overloading the centre of the park was a tactical decision, Tuchel knowing full well that Gladbach’s 4-4-2 could be exploited when pressed, targeting Lars Stindl’s limitations on the ball in the centre of midfield especially. 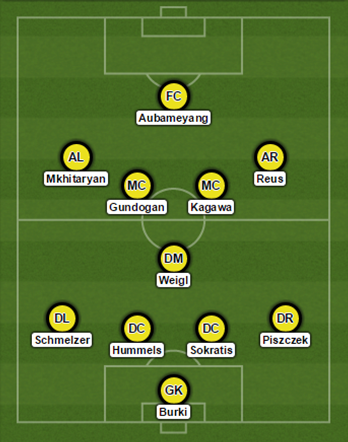 Three out of the four goals scored against Gladbach, came from either Weigl or Hummels passing through Gladbach’s midfield four, to Schmelzer, Gundogan and Kagawa who were then able to create the chance. The 4-1-4-1 formation instantly created uncertainty in the opposition, as they were not sure whether to press Weigl on the ball or man mark the advancing midfielders drifting into space. This created a half and half effect, which in effect caused Gladbach to neither press nor man mark, giving Aubameyang and Reus criminal amounts of space in and around the box. You don’t want to give those two space, and Lucien Favre’s men were duly punished.

In their second fixture, the choice to use a 4-3-3 against Ingolstadt was partly based on the home side’s decision to use a 4-3-3 as well. With the 4-1-4-1 that had been serving them so well, it can sometimes be easy to pass quickly through the midfield, leaving Weigl isolated with two or more runners to mark at once. Dropping Gundogan and Kagawa slightly deeper provided the midfield with athleticism to cover runners, but also the technical ability to keep the ball and pass through Ingolstadt when they pressed. 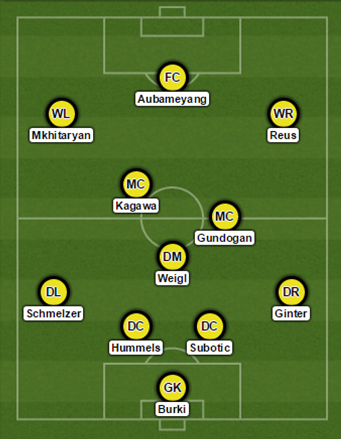 Once Dortmund began to gain control of possession in the second half, they reverted back to their 4-1-4-1 formation which then outnumbered the midfield three of Ingolstadt. This caused the newly promoted side to try to congest the middle of the park to deal with the likes of Gundogan, Kagawa and Mkhitaryan, which subsequently left the flanks open for their full backs Schmelzer and Ginter. This space out wide proved crucial, with Ginter, filling in at right back for the injured Lukas Piszczek, ending the game with a goal and an assist in a 4-0 victory.

This 4-2-3-1 formation was used in their most recent Bundesliga tie against Hannover, where Dortmund were again the victors. Away from home, it’s understandable that Gundogan was asked to share defensive responsibilty with Weigl, as Jonas Hofmann came in on the right to replace the injured Marco Reus. Going forward, Tuchel used Mkhitaryan almost as a support striker coming off the wing, which would then mean Kagawa drifting over to the left and Gundogan filling in as the number ten. 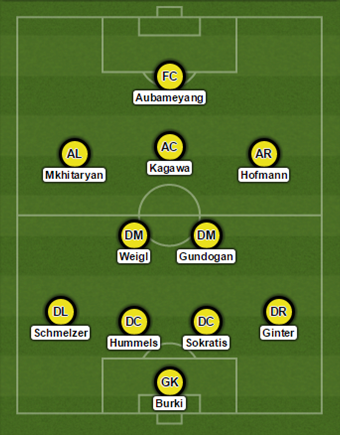 The alternating between a 4-2-3-1 when defending and a 4-1-3-2 when attacking gave Dortmund control in any stage of the game. The shield of Weigl, Gundogan and even Kagawa dropping deep congested the midfield when Hannover were in possession, keeping Aubameyang, Mkhitaryan and Hofmann ready in wide areas to exploit the space in behind on the counter. But when they wanted to pass the ball around, Gundogan would then step up and create another option in the final third, drawing the main Hannover defensive midfielder Salif Sane out of position with two players to mark rather than one, leaving big gaps down the centre. Despite conceding two sloppy goals, Dortmund’s plan to overload their attack again proved too much to handle for their opponents, scoring four goals for the third time this season in the Bundesliga.

In his first press conference as Dortmund manager, Tuchel was keen to praise his predecessor stating that “Jurgen Klopp had seven unbelievably successful seasons here. We will now try to create a new chapter at a high level.” But he intentionally concluded by saying that, “Klopp created a great foundation. We must build on that. I have a great desire to build and create my own image here.”

After a record ten wins out of ten, 35 goals scored and only nine conceded, breathing new life into a tired squad and filling the fans full of optimism again, Tuchel is not only creating his own image, but perhaps on the verge of producing a masterpiece.

Like this sort of thing? Check out the profile on European Championship surprise package Slovakia.