Just over five years ago, Aston Villa were on the edge of the elite. Martin O’Neill was the driving force, albeit with the help of Randy Lerner’s wallet. Three consecutive sixth place finishes were rattled off in 2008, 2009 and 2010. James Milner, Ashley Young and Gareth Barry pulled the strings on the field. They were devastating on the counter attack and they could beat anybody on their day. Those days are long gone now. After miserable spells under Gerard Houllier, Alex McLeish and Paul Lambert saw the club narrowly escape relegation in five of their last six seasons, the future doesn’t look much brighter under Tim Sherwood unless something changes, and quickly.

Sherwood is a figure often ridiculed in the public for his post match comments, his gilet wearing and his remarkably white trainers, but he has shown at Tottenham and at Aston Villa that he has the capability to man manage well, in addition to improving his players. In his first press conference as manager, he declared “I know how to win games in this league. I like to galvanise players and get the best out of them. It’s pretty simple, all I can do is prepare team to best of my ability.” which in truth, he did. Despite losing his first two games in charge, Sherwood won five out of his last ten in the league, the same number that Lambert managed to win in 25. There were also two trips to Wembley in a surprising FA Cup run which ended with a 4-0 defeat to Arsenal in the final.

Villa’s prospects for the season looked bleak yet again. In just seven days, the club lost Christian Benteke for £32.5m to Liverpool as well as their club captain Fabian Delph to Manchester City for £8m after an extraordinary u-turn. With the squad in desperate need of some new faces, Sherwood signed both Idrissa Gueye and Jordan Amavi for a combined total of £18m. Their business across the channel wasn’t finished there. Jordan Ayew, brother of Andre, came from FC Lorient for £8.5m and another Jordan, this time Veretout from Nantes for £10m. Micah Richards was acquired on a free transfer, in addition to triggering their £2.5m option to buy in Scott Sinclair’s loan agreement from last term. Adama Traore, a powerful winger from Barcelona, and Rudy Gestede were added to the squad late on. Sherwood was effective in the market and fought off significant competition to bring talent to the Midlands, with owner Lerner showing a will to invest that had been missing for some time.

The obvious difference between having a good season or battling the drop would come down to replacing the goals of Benteke. Having put 15 into the back of the net, the Belgian was responsible for 49% of Villa’s goals in the Premier League last season. Not to mention the fact that since his top flight debut in 2012, he (42) has only been outscored by Aguero (55), Suarez (53) and van Persie (44). Thus far, scoring goals has been an issue, but not a huge problem, with a mediocre eight in seven games. The main concern is how many they’re conceding, having let in twelve –  the joint third worst record in the division.

On the opening day of the season against Bournemouth, Villa set up in a 4-3-3 with five new signings in the starting line up. Micah Richards and Jordan Amavi were the new men in defence, along with Idrissa Gueye and Jordan Veretout in midfield as well as Jordan Ayew slotting in on the right hand side in the forward three. 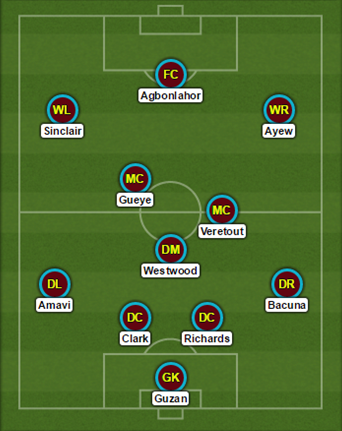 Villa’s plan was to play on the counter, but they were unable to get numbers forward in support of Agbonlahor quickly enough. When under pressure, Agbonlahor can provide an outlet for his side, but he cannot hold the ball up and bring others into play. Cue Rudy Gestede. With half an hour to play, Gestede was brought on with Agbonlahor moving wide which made a world of difference. Veretout and Gueye were able to have more of an impact in possession, and Villa had a real focal point to play off around the box. The game was won by a solitary goal, a bullet header from Gestede via a Westwood corner. The big Beninese may lack the technical finesse of other strikers in the Premier League, but he is a considerable threat in the air. Sherwood’s proactive substitution made the difference.

Away at Leicester on September 13, Sherwood decided to start with the 4-2-3-1 formation, with the silky duo of Jack Grealish and Carles Gil joining Scott Sinclair in the slightly more forward thinking midfield positions. Up top again was Agbonlahor, with Carlos Sanchez alongside Westwood as the two deeper lying midfielders. Late summer signing Joleon Lescott came in ahead of Ciaran Clark in what would otherwise be a familiar back five. 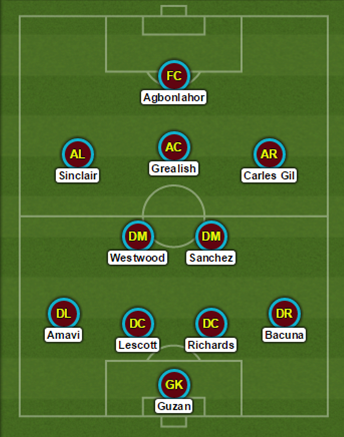 After scoring two fantastic goals through Grealish and Gil, the game change when the latter was substituted for Jordan Ayew when perhaps another midfielder would have been wiser. Villa began to crumble. Leicester were overrunning their guests in midfield, peppering Guzan’s goal. With the score at 1-2, Sherwood then brought on another forward player in Gestede, who offers very little defensive output, and the Leicester pressure continued. Jamie Vardy and Nathan Dyer went on to score for the home side, as Villa gave up a 2-0 lead. The way they capitulated was awful, but they were not helped at all by their manager.

Against Liverpool on September 26, Sherwood reverted back to a 4-3-3 with Gestede leading the line, accompanied by Grealish and Sinclair either side of him. Gueye returned from injury, and joined Sanchez and Westwood in midfield whilst Alan Hutton came in for Leandro Bacuna as the only change in the back five. 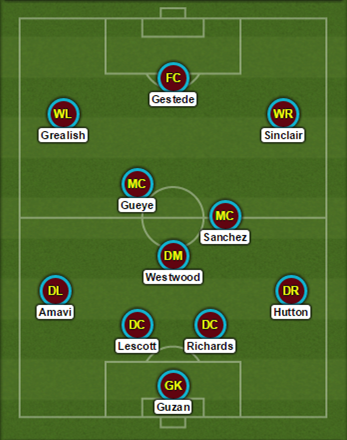 Most importantly, Sherwood finally went with Gestede up front. Agbonlahor certainly has his uses, but without a goal to his name this season, it was increasingly difficult to justify his inclusion. Gestede, on the other hand provides an aerial presence, a predatory instinct in the box and will always give the centre halves a battle as the game progresses. But again, Villa’s defending was to be their downfall. Westwood, Sanchez and Gueye were non-existent in their tracking of Liverpool’s midfield runners as Milner scored in the second minute. After a lovely Sturridge goal (which Lescott may not want to watch again), they were handed a lifeline through Gestede in the 66th minute. 2-1. An Arsenal-esque lapse in concentration and discipline saw them concede in the 67th. 3-1. Sherwood’s attacking style again exposed. Despite another towering header from Gestede, Villa were again undone by their porous defence which will frustrate the claret and blue faithful as all of their good attacking play is being wasted.

Results haven’t gone their way with only one win in seven, but there are glimpses of potential. In his most recent press conference, Sherwood said, “we realised when we went down this route to bring in these development players from a different country in large quantities that you’re rolling the dice.”

With a mixture of exciting young talent in Grealish, Amavi and Traore and grizzled Premier League knowhow in Lescott, Guzan and Richards, Villa should be okay. But they do keep making elementary mistakes. And Sherwood can still improve.