After two disappointing spells under the instruction of club legends Clarence Seedorf and Filippo Inzaghi, it was time for reality to kick in as Sinisa Mihajlovic was appointed in the summer. A ‘real’ manager who had completed spells at Bologna, Fiorentina and Sampdoria who also, as coach of Serbia, visited and studied under the likes of Jose Mourinho, Pep Guardiola, Jurgen Klopp, Arsene Wenger and Sir Alex Ferguson.

The Serbian is a charismatic manager who wants his players to express themselves, but also places a strong value on discipline. No player is bigger than the team, as Samuel Eto’o found out after being benched for his laboured efforts in training with Sampdoria in the spring. But not only does he want his players to work hard, Mihajlovic has a proven track record of improving them, with Lorenzo De Silvestri, Stefano Okaka and Roberto Soriano all receiving call ups to the Italian national side which 12 months ago would have been unheard of.

Mihajlovic said all the right things in his first club press conference, starting with “It’s a great honour to be here. This is a very special first day for me. The atmosphere here is very important. Now that I am here, I feel it even more so… This is a club that has an enormous history. I am not part of the Milan history, so I thank the club for the faith in me. It has been a couple of difficult seasons for Milan and I want to take them back to the top.” That’s one way to get the fans on side.

So, with an ageing and depleted squad, fed up fans and a non-existent youth academy – how do you go forward? By spending money of course. And lots of it. Backed by the controversial Silvio Berlusconi who ‘couldn’t let the club suffer anymore’ according to his brother, and Bee Taechaubol (also known as Mr Bee), the club spent upwards of €90m throughout the summer transfer window.

In came Carlos Bacca (€30m), Alessio Romagnoli (€25m), Andrea Bertolacci (€20m), Luiz Adriano (€8m), Luca Antonelli (€4.5m) and Juraj Kucka (€3m), with Daniele Bonera, Sulley Muntari, Giampaolo Pazzini, Michael Essien and Robinho all leaving the club on free transfers. A shake up of the squad was much needed, and in Bacca, Luiz Adriano and Kucka they have players who can come in and make an impact in the present, but in Romagnoli and Bertolacci they have two young players holding considerable potential for the future. 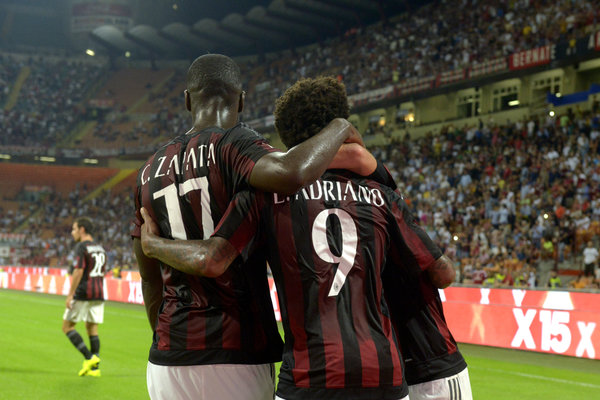 Another key factor in Milan’s mini resurgence has been finding a balance in midfield. The tough tackling Nigel de Jong is perfect for the deepest role in the three, with the slightly more refined Ricardo Montolivo also comfortable playing there should Mihajlovic feel that ball retention is key. On the left of three, there are the options of box-to-box player Antonio Nocerino, who has been given a lifeline by his new manager after becoming alienated in the last few seasons, or the more forward thinking Giacomo Bonaventura who can do the dirty defensive work but also make a difference in the final third with his vision and creativity.

The right side of the three is normally filled by the well rounded Bertolacci, who can do everything required from a midfielder, or Kucka who possesses a slightly more defensive approach to the game. With these six midfielders, who slightly struggled for cohesion at the beginning, Mihajlovic has the potential to field a midfield three to suit any occasion. Want to dominate the ball? Use Montolivo, Bonaventura and Bertolacci. Want to congest the midfield? Use de Jong, Nocerino and Kucka. Want a mixture of all three? Use Montolivo, Bonaventura and Kucka. Creating a balance within your side is hugely important, and as they progress through the season this will be hugely helpful to the men from the capital.

In terms of their tactics, after their opening day defeat to Fiorentina, AC Milan again set up in a 4-3-1-2 formation for their match against Empoli. Three changes were made, with Christian Zapata coming in at centre back to replace the suspended Rodrigo Ely, Nocerino starting instead of Bonaventura in midfield and ex-Liverpool man Suso given creative license in the hole behind Luiz Adriano and Bacca. 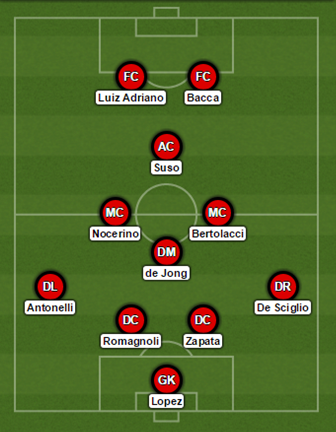 After his decision to persist with two up front was scrutinised just days before, the first goal of the night was a huge ‘I told you so’ on Mihajlovic’s behalf. Luiz Adriano dropped deep to control the ball, and within an instant, Bacca had sprung into the open space behind the high Empoli line. After a beautifully weighted pass from his strike partner, Bacca held off his man before finishing clinically. A perfect example of what playing with two strikers can give you. The midfield three of de Jong, Nocerino and Bertolacci were the perfect mixture of aggression, energy and technical ability for Milan and were hugely influential in putting their first three points on the board, not to mention Romagnoli and Zapata beginning to settle as a defensive duo.

The Milan derby would follow a week later, as Mihajlovic stuck with his preferred 4-3-1-2 formation. With Inter also playing a 4-3-1-2, the match would be won and lost in the middle of the park, so gaining control would be vital for either side. With this in mind, Mihajlovic opted for Ricardo Montolivo as his deepest midfielder to dictate the tempo from deep, as well as the industrious Juraj Kucka and inventive Bonaventura were brought back into the side to provide a nice balance. 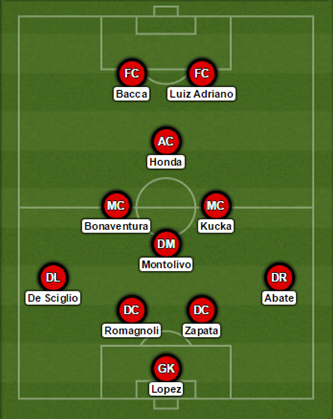 Despite losing the match 1-0, Milan more than played their part and were unlucky to come away with nothing. Montolivo and Bonaventura in midfield were particularly excellent, battling well against the physical Inter midfield which included the likes of Geoffrey Kondogbia and Felipe Melo. The decision to play Montolivo as the deepest midfielder was an inspired one, as Milan often looked very assured in possession and were able to pass through the lines to good effect. Bacca and Luiz Adriano are developing an almost telepathic understanding as the weeks go by, and had it not been for some excellent last ditch defending from Inter, goals would have been scored. Encouraging signs for Mihajlovic, as even Mario Balotelli came on in the second half and looked promising.

In their most recent fixture away at Udinese, you guessed it, the 4-3-1-2 was the formation of choice. Balotelli was given the nod ahead of Luiz Adriano after his impressive cameos coming on as a substitute, whilst Montolivo was pushed further forward in place of Kucka with de Jong coming in as the deepest of the midfield three. De Sciglio, Romagnoli and Zapata all retained their places in the side with 18 year-old Davide Calabria coming in at right back to make his first senior appearance for the side. 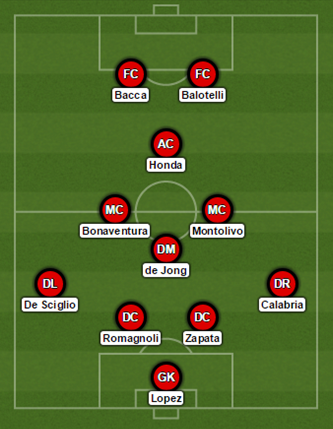 Balotelli looks to be on the right track, scoring a wonderful free kick in the 5th minute as he and Bacca caused problems all night. All three Milan strikers (including Jeremy Menez) have the ability to run in behind in addition to acting as target men, which makes using two up front so effective for this side. The excellent Bonaventura also scored a goal in the impressive 3-2 victory. What will be of concern to the Milan boss, is how a 3-0 lead turned into 3-2 in five minutes, as well as the poor form of Keisuke Honda. Mihajlovic’s defences are usually very solid, but so far this season Milan have conceded eight goals which is one of the highest amount in the league. After the game, the 46 year-old stated that ‘a 1-0 win would be nice occasionally!’

While Mihajlovic certainly divided opinion upon his arrival, the feeling around the club is now that with his philosophies and desire to succeed at the club, he could be the perfect man for the job. Milan are far from the finished product, and as they currently sit in 9th, Mihajlovic is still working things out as the season progresses which is perfectly normal with new signings and ideals to implement. Two wins in their last two could prove to be a real confidence boost and will relieve some pressure, and while the signs are promising moving forward, there is still work to be done.