We’ve all done it, let’s be honest. We’ve had a good run on Football Manager and it’s crossed our mind, however fleetingly, that we might just make a good real-life gaffer.

Your tactics are strong, you deliver a rousing half-time team talk and your recruitment is on point. Surely if you can take Plymouth Argyle to the brink of Champions League success, you must be pretty good, right?

Yet, like an undiscovered Pep Guardiola, it might seem unlikely you’ll ever get the chance to prove what you can do in the dugout. Alas, it would have been beautiful.

Those thoughts were partly what inspired The Set Pieces to launch the FM20 Coaches Project as we pitched six real-life coaches against one Football Manager fan to see who’d come out on top. And if success on the game and in real life really correlates. 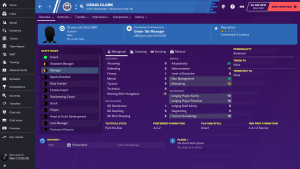 “I grew up playing Championship Manager [the precursor to the Football Manager series] and that probably gave me the impetus to be a coach,” explains Kilmarnock under-23s coach Craig Clark, who took part in the competition.

“Subconsciously, I already had knowledge and an idea about team shape and what I’m looking for in a player before I even knew it. The game gave me that flavour.”

For Clark it was a slow burner, but some of our other coaches saw Football Manager as a tactical awakening. They were football fans already and found plotting out how to win on the game gave them a greater understanding of the intricacies of the matches they were watching.

That’s exactly how Chelsea coach Ben Cole got into the tactical side of things. As a long-time fan of the series, he started on Championship Manager 01/02 and spent hours tweaking his team’s setup to create a well-rehearsed side that did exactly what he wanted on the pitch.

“When I first started playing, what I loved were the settings where you set your style and shape, then you had when the ball was here and you clicked into one of 20 zones – I want a certain player to be there or to be there depending on if we’d got possession or not,” he says.

“That was brilliant. For me, that made me understand how to counter-attack. I’d leave my right forward high if the ball was on the left, so if we win it back, we can try to play it out to the right. I used to love that and would spend hours working out where I wanted players to be in different situations. For me, that was my first real understanding of tactics.”

Bolton first-team data analyst Adam Cooper agrees. “Football Manager is really good for people trying to get into coaching or trying to transition from playing to coaching. It’s a really good way of understanding a few different systems, especially if they went really to town and looked at the different tactical systems people have set up on Steam.” 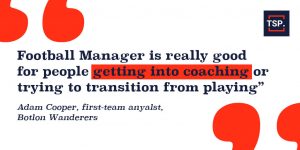 While the games were a great proving ground for our coaches, how useful Football Manager can be once they’ve made those early steps is a topic that divides the group.

There are some real-life scenarios, such as running specific training drills or managing genuine social relationships, that are hard to replicate on a computer game. However, the sheer depth of data Football Manager offers managers to analyse means there’s something to learn there.

Ukrainian coach Konstantyn Garbar has worked in several different countries, including a stint with Portuguese giants Benfica, and points to the realism in some areas above others.

“It’s good in terms of how you speak to the players and how they react to that is good because it shows if it’s good or bad feedback,” Garbar explains.

“The statistics part is brilliant [too] with all these zones that professional teams use during training and games. And, in general, how you hire your staff and handling contracts is really good at the top level.

“But I believe there is no way to recreate training because in real life there are so many variables when you get out on the pitch. If Mourinho went to all the coaches in the world and gave them his weekly plan for training the team, we’d all use it differently: with a different voice, approach, players, conditions. I don’t know how you’d recreate that.”

Not surprisingly considering their jobs, the coaches’ attention to detail means they scrutinise every little aspect of how their teams perform out on the pitch. Football Manager’s realism improves with every passing edition and has become a trademark of the series’ authenticity, with the coaches able to get so deep into the tactics, they want to wring even more out of the gameplay. And it seems achieving that sweet spot isn’t far away so virtual players act like their real-life versions.

“I’d like to see the players act even more intelligently during the game,” says Cole. “They sometimes leave gaps on the pitch that wouldn’t happen in real life.

“For example, if I play two strikers and no attacking midfielder, there’s always a big gap between them and the midfield, no matter what role I pick. In real life, one of the players would drop into that gap.”

“That tactical detail would be good so you can put your players in the exact position you want,” Clark chips in. “If you could set it up to that detail and it goes wrong, you know it’s you. The amount of data is ridiculous and the things you can do are ridiculous, which makes it great, but doing that would create a bit more ownership.”

One area where Football Manager always excels is its player scouting network. For years, the sheer wealth of knowledge Sports Interactive taps into has made the game stand head and shoulders above all others.

And Garbar points out how it could quite easily be adapted to help professional football clubs and provide a resource to run more efficiently.

“Football Manager is a great tool for scouts because you can explore the whole world [using the game],” Garbar says. “While you’ll still want to watch a player before signing him, you can see if he’s decent on Football Manager and I know some scouts and professional coaches say they’ve found players on the game, which is crazy.”

Stories of real-life scouts using Football Manager’s database to check players have buzzed around the game for years – with a couple of our coaches knowing people who have done just that. And while Bolton man Cooper says there’s probably cynicism of that approach higher up the pyramid, he can see the benefits further down the divisions.

“Football Manager could be useful for non-league clubs to narrow down scouting parameters if they’ve got a limited output or budget,” he adds.

“It could be good in terms of knowing what you’re likely to see from a player before you go to watch them, although it all depends on how big the database is.”

So next time you fancy chucking in your Football Manager CV for your club’s managerial vacancy, perhaps you might be handier to them than you’d think.

Not up to speed with The Set Pieces’ FM20 Project: The Coaches? Follow all of the latest episodes and find out if our real-life coaches are any good on the game.