Kitzbühel is an Austrian town renowned for its ski resorts. Situated in the Kitzbühel Alps in the Tyrol district of the country, the town plays host to World Cup ski races and has 10,000 guesthouse and hotel beds available for visitors.

Sean Caldwell used to be just like any other tourist in town, but his work in transforming the town’s football club means he can now be considered a local.

FC Eurotours Kitzbühel currently play in Regionalliga West, the third tier of Austrian football. That’s one level higher than they found themselves when Caldwell arrived at the club three and a half years ago.

“I had been visiting Kitzbühel for many years on skiing holidays,” the British coach says. “After speaking with a few people I got in touch with the football club, which I didn’t know much about at the time, and was offered a role to coach the under-17 team. I felt this was a good opportunity to take myself out of my comfort zone as a coach, while also learning a new language.

“I started as under-17 coach and within two months I was also asked to take on the under-sevens and eights. After doing that for a season, I continued to advise our youth departments while working as first-team assistant manager.”

In Caldwell’s debut campaign with the senior squad, Kitzbühel were promoted from the Tiroler Liga to the Regionalliga, the final step before the top two national divisions. The Englishman was involved with the first team again last term, when they recorded their best ever league finish (fifth spot in the third division) in their history. As well as improving the club, Caldwell made his own individual advances.

“When I left England, I was a very young academy coach who was perhaps – at the time – a little out of my depth. I’ve developed and learned a lot in the past four years and feel like the project I’m now embarking on is the right fit for me at this time of my career.

“There are many differences in football from Austria to England – the timing of the seasons, stadiums and infrastructure – but on the training pitch and on game day, football’s still football!” 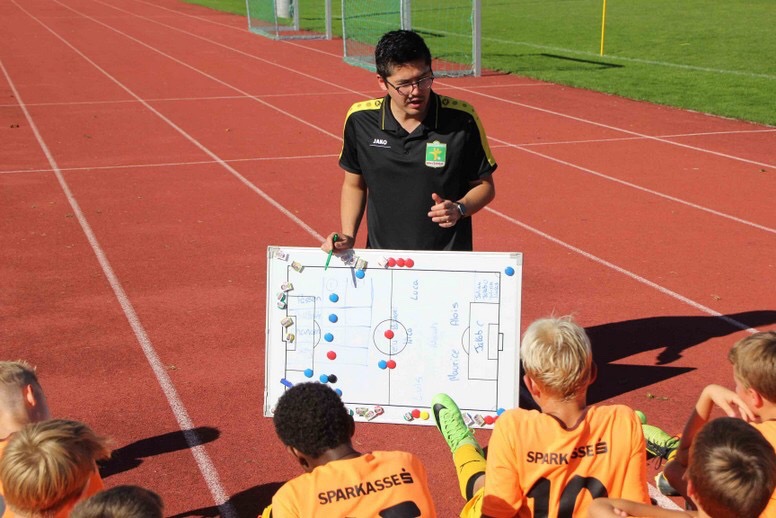 As well as developing his coaching abilities, Caldwell has learned another skill which is bound to help him in his future life – both within and away from the game.

“When I first came I didn’t speak any German, so taking over the younger teams put me in a sink-or-swim situation. I learned the basics quickly and have continued to learn the language as I go.

“I communicate with my players and staff only in German now, with a strange Tyrolean accent or dialect. However, in times of high emotion it’s often quite difficult to find the right words. So I’m also thankful that most of my players can understand the odd word in English if they need to. They’ve probably learnt a few new choice words from me too!”

During his time at Kitzbühel, Caldwell has been able to use his contacts to recruit new players from back home.

“Initially I contacted some former colleagues and then, in my second season, we formed a partnership with Southend United,” he says. “I know the coaching staff there well. Our partnership with the club remains and we hope to bring over some more of their top talent in the near future.” 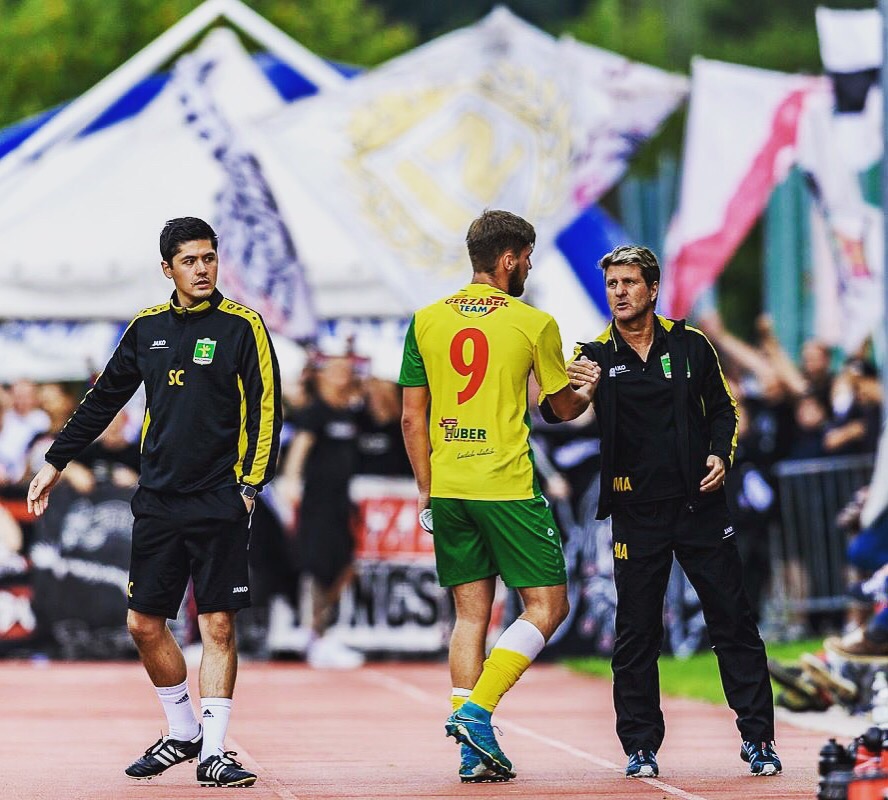 Two of Caldwell’s countrymen joined him at the club during the 2015/16 season. The first was midfielder Tayshan Hayden-Smith, who had been winning non-league admirers playing for Enfield Town. The second was former Fulham youngster Tom Richards, who had experience of playing in League Two and, most recently, in the National League with Aldershot Town.

“I was at Aldershot the season before and the goalkeeping coach there was good friends with Sean,” says Richards, now 24. “He got in touch with him and that’s how the move came about. It tempted me as I’d always liked the prospect of playing abroad and it was a chance to play regular football.”

Having settled in well, Richards went straight into the starting line-up of a team who were targeting promotion from the fourth tier that season.

“The standard was a bit better than I was expecting; we had a good team,” he recalls. “It’s hard to compare to England as it’s a very different style of football, but I’d say it was similar to National League South.

“My contract was part-time with training only two to three times a week in the evening. In my spare time I usually chilled out with my team-mate who lived with me, or went out to explore the town.”

Richards, who now plays for Isthmian League Premier Division side Dorking Wanderers after a spell at Leatherhead, went on to make 17 appearances for the Austrian club in all competitions, scoring twice and helping set the side up for promotion before departing during the winter break. Despite the regular football, playing abroad is something the midfielder may have to think twice about next time.

“At first I found it really easy to settle but after a few months it became a bit more difficult for me. Everyone is different. To be completely honest I’m not sure if I would play abroad again – it would really depend on the city, league and contract offered. I had a great time playing football in Austria, but I struggled a bit with adjusting to the lifestyle and social life.”

Despite Richards’ exit, Kitzbühel still earned promotion of champions. That’s when Caldwell set up the link with Southend, arranging for two players to join the Austrian outfit on loan for the first half of the campaign. The new arrivals were forward Dan Walker and goalkeeper Josh Bexon, who had been on the bench 18 times for the first team during the previous season.

“I was looking to go out on loan and my academy manager thought this [going to Kitzbühel] would be a good move for me, and so when the opportunity came along, I couldn’t say no,” says Bexon. “I went out there for a few days to train with them to see if I liked it and if they liked me. From there they wanted me to go on loan, which I said yes to.”

The young shot-stopper joined the club one level higher up the pyramid than Richards had experienced, and the rise in professionalism was noticeable. 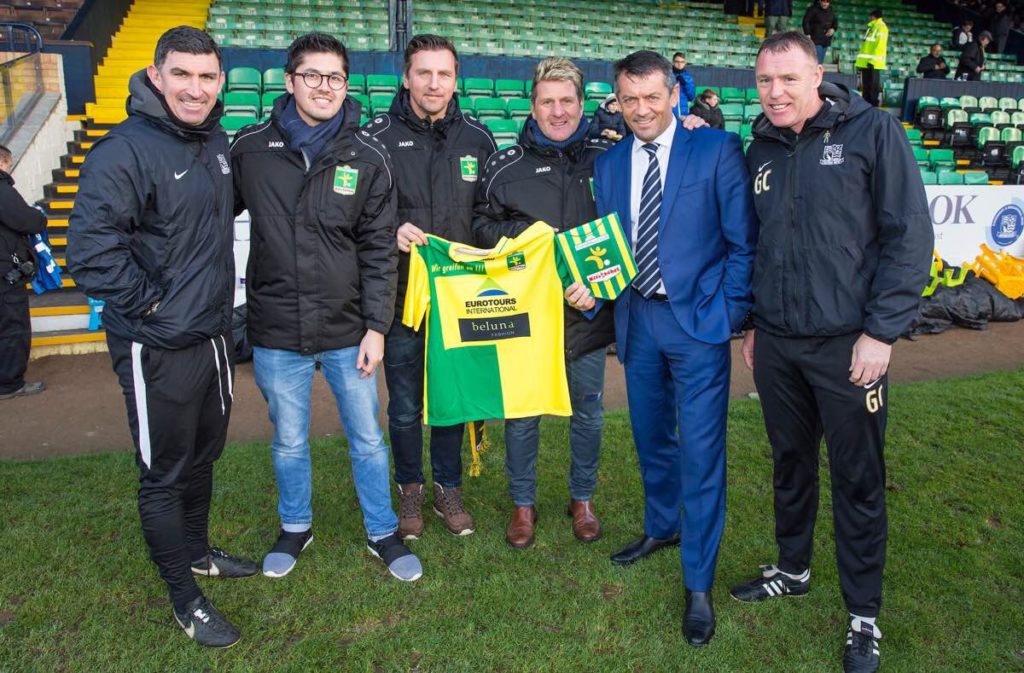 “The club found me an apartment while I was out there. It was traditional Austrian style, which was very nice. The apartment was in Kitzbühel and only a short walk or bike ride to the training ground, and a short walk from the town centre.

“We would train in the evening with the club and myself and Dan would go to the gym during the day. We trained three to four times a week with a game at the weekend. In our spare time we went out exploring the town and met up with a few of the boys from the team – they’d take us to places for a day out.”

Bexon went straight into the XI as No.1 goalkeeper and made 10 league appearances, before dropping to the bench due to injury.

“It took me a few weeks to get used to the fact that I was living in Austria to play football,” he says. “It also took me time to adjust to the different altitude, which was difficult for the first 10 days or so. But from there the boys were very welcoming and got me involved in the conversations. I learned the basics of the language while I was out there too.

“The standard of football out there is very high, with most teams wanting to play out from the back. They enjoy having the ball at their feet. The third division was a good standard with a lot of good players who have played internationally and in the top divisions in Austria. It was my first time going out on loan and I really enjoyed it.”

The 20-year-old goalkeeper is still on the books of Southend, although he currently finds himself out on loan at seventh-tier Harlow Town. Walker is no longer with the Shrimpers.

After the loanees had helped Kitzbühel to their highest ever league finish in their first season after promotion, Caldwell was handed a new role at the club.

“I was asked by the board to completely restructure the youth department, while also managing our second team,” he says. “Within the youth section, I work with elite players from every age group at least once a week, while also educating our coaching team under the club’s new youth philosophy. I combine this role with managing our second team, which is effectively an under-23 team playing in the national league structure.

“Our second team is currently playing five leagues below our first team, which is far too great a gap. Our aim is to decrease the gap to a maximum of two leagues within the next five years.

“Managing a second team in Europe is a great challenge, as I’m managing a developmental group of players who are playing against senior men’s teams on a week-to-week basis, with the aim to win the league.

“It’s been a challenge but I’m now in my fourth season at the club, so something must be going right! A move abroad won’t be for everyone but getting out of your comfort zone and learning a new language, I feel this is something every coach should try and do. If I’d stayed in England, I certainly wouldn’t be the coach I am today.”

Caldwell is in this for the long-term and if he builds on the impressive progress he’s already helped the club make, skiing might not be the only thing Kitzbühel is famous for in the future.