Ernest Willimowski had a choice to make. It wouldn’t be easy and he’d lose friends and admirers. But in the end, like thousands of others, he felt there was no other way.

A young footballer who had made a name for himself in Poland, the country of his birth, Willimowski was not used to playing politics. He simply wanted to do what he loved and what he was good at: scoring goals.

He had done it since he was a teenager, a precocious talent who emerged at local club 1. FC Kattowitz. He was not hindered by having six toes on his right foot, nor was he a youngster who needed time and patience to make his mark.

Willimowski was unorthodox, both on and off the pitch. He drank heavily right from the start of his career, soon establishing a reputation as a maverick and a womaniser. None of it – not the drinking or the late-night escapades – seemed to have any impact on his progress as a footballer though. On one occasion, when responding to criticism for his off-field antics, he called a reporter and said: “Write this: Ernest Willimowski greets all those in Upper Silesia who have called him an alcoholic. He is now showing them how to play soccer.”

Having moved on from Kattowitz in 1934, Willimowski scored 112 goals in 86 games for new club Ruch Wielkie Hajduki, helping the Polish First Division side to numerous trophies and convincing any remaining doubters he was among the most exciting talents in Europe.

He had made his Poland debut at the age of 17, though he was left out of the team that travelled to the Berlin Olympics because of his drinking habit. All of this only added to Willimowski’s myth.

Here was not only a supremely gifted footballer but a renegade, a man with vices and failings. Often, it is these players who endear themselves most to the watching public.

He was certainly popular in Poland. By 1938, when Poland had qualified for the World Cup in France, Willimowski was perhaps the most revered footballer in the country’s history. His status only grew after his four goals in a game that came to be known as ‘the match of the century’, a 6-5 defeat to Brazil after extra time in the first knockout round.

The story goes that he celebrated his performance in Strasbourg by drinking the night away in a bar. He was so inebriated he agreed to sign three professional contracts, but his teammates quickly dragged him away and ripped up the agreements. The veracity of this anecdote is not clear, though he never did get the chance to play professionally.

But Willimowski was, by then, still only 22 and it seemed he was set to become a superstar in Poland. The outbreak of war a year later changed everything though. Germany invaded Poland and the young star changed his allegiances.

Willimowski took up German citizenship – his parents, Ernst-Roman and Paulina, were German and his father had been a soldier in the German Empire. His identity was complex. He had grown up speaking German at home, calling himself a Silesian and went to a German primary school.

His father died fighting in the First World War and at the age of 13 he was adopted by a Polish man, changing his name from Ernest Otto Prandella to Ernest Willimowski. A third name change was to come: the Polish forename Ernest became the German Ernst.

It was another change of identity, one that many in Poland considered opportunistic and cowardly. Willimowski, having completed his transition, applied for a position at a police unit to avoid being called into the army during the war and then went back to football.

“His nomadic life sounds like a story from the 19th century when people felt a greater affiliation to regions than to national states,” said historian Diethelm Blecking in a 2012 lecture on Willimowski.

It’s not clear whether Willimowski’s choice was made out of pure self-interest or a legitimate attachment to Germany. Most suspect the former, but it is a moral dilemma that is far easier to dismiss 80 years on. Like millions of others in Poland following Germany’s invasion, Willimowski’s livelihood, his freedom, was at risk.

His choice allowed him to continue as a footballer and he was no less prolific across the border. For 1860 Munich, Chemnitz-West, Offenburger FV and later VfR Kaiserslautern, Willimowski excelled, a striker with raw pace and an impressive ability to score with both feet. He did not seem to regress with age, still playing well into his 40s.

This enigmatic player might have been forgiven back in Poland had he stuck to the domestic game. But his decision to accept a call-up to the German national team proved the final straw. He made only eight caps for Die Mannschaft (scoring 13 goals), yet it was enough to ostracise him entirely from the people who had once lionised him.

This perceived defection and the fact he had represented Germany with a swastika on his shirt meant Willimowski was effectively written out of the history books in Poland. He was cast aside, forgotten, his reputation forever tarnished. In communist Poland after the war, he was blacklisted.

There was no happy ending in Germany either. Willimowski did not play enough for the national team to earn the true admiration of his new supporters and he was too old to be a part of the team that became known as the Heroes of Bern after winning the World Cup in 1954. 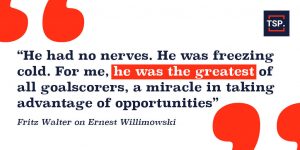 He was consigned to history, remembered more for the curiosities of his life – his flexible national allegiances, his six-toed foot, his excessive drinking – than his talent as a footballer. And, make no mistake, he was among the most gifted players of his generation.

One rough estimate suggests Willimowski scored a total of 1,175 goals over the course of his long career, though that included friendlies and unofficial matches. Even the more realistic competitive total of 554 goals – which is his official tally according to The RSSSF – would make him the 14th-most prolific goalscorer in history.

“He had no nerves,” said the German forward Fritz Walter of Willimowski. “He was freezing cold. For me, he was the greatest of all goalscorers, a miracle in taking advantage of opportunities. He scored more goals than he had chances.”

When he retired as a footballer in his 40s, Willimowski opened a restaurant, which he ran with his wife, Klara. He later worked briefly at a sewing machine factory, before settling into retirement in his 60s.

Willimowski died in 1997 at the age of 81. He was buried in the main cemetery in Karlsruhe, Germany. The name on the gravestone, significantly, reads ‘Ernst Willimowski’.

There might have been the opportunity for reconciliation between man and country later in his life. Years had passed; some may have responded to Willimowski’s explanation with more understanding. But he never returned to Poland.

In 1974, the coach of the Polish national team, Kazimierz Górski, met Willimowski at a hotel during the European Championship in Germany. “If you had not done anything wrong, perhaps you should have come back to Poland and explain your behaviour,” Górski told the former player, now an ageing, melancholic figure. “Cleanse yourself of all charges.”