It never takes long for the leaks to appear.

Soon after a Premier League manager is sacked, reports appear in the media detailing his demise. Such stories usually feature input from “sources close to the squad” but rarely any direct quotes from the players themselves.

With that in mind, the willingness of Wimbledon’s first team to put their antipathy towards Egil Olsen on the record underlines just how badly his tenure turned out.

“It’s been publicised that we don’t get on with the manager – the way he works, his attitude or his approach,” John Hartson said of the former Norway boss. And that was while he was still in the job.

In fairness to Wimbledon, this appointment in summer 1999 was only disastrous in hindsight. The hot seat at Selhurst Park, the stadium the Dons had been sharing with Crystal Palace for eight years, had recently been vacated by Joe Kinnear. Olsen was a left-field pick by the standards of late-1990s English football, but he had a respectable track record and offered ideological continuity for a club renowned for its up-and-at-’em approach. Indeed, this was a man who summarised his football philosophy as “[playing with] as few passes as possible, the most penetrative and effective way”.

Kinnear had done a terrific job during his seven years at Wimbledon. He took charge in January 1992 and steered the club away from relegation trouble, then secured a 12th-place finish in the Premier League’s inaugural campaign. Wimbledon went on to end the 1993/94 season in sixth, their highest ever top-flight placing and also finished in the top half in two of the next three years.

Kinnear did all this while gradually phasing out the Crazy Gang generation. The apex for that team came with victory over Liverpool’s Culture Club in the 1988 FA Cup final, but by the time Wimbledon finished sixth five years later, Vinnie Jones, Lawrie Sanchez and John Fashanu were the only remaining members of that day’s starting XI. Within a year Jones was the last man standing.

Wimbledon finished 15th and 16th in Kinnear’s final two seasons of 1997/98 and 1998/99. They collapsed in spectacular fashion towards the end of the latter campaign: having been sixth in early March, the south Londoners took just two points from the next 33 available and duly tumbled down the table.

The downturn was explainable, though. Kinnear suffered a heart attack during a win against Sheffield Wednesday in March and took a step back thereafter. He resigned at the end of the season in search of opportunities higher up the food chain and the club’s Norwegian owners, Kjell Inge Rokke and Bjorn Rune Gjelsten, lined up Olsen as his successor.

For all his credentials, the appointment contained an element of risk. Olsen had done remarkably well with Norway, guiding them to the 1994 and 1998 World Cups, and as high as No.2 in the FIFA World Rankings. Their long-ball game wasn’t to everyone’s taste, but the approach was undoubtedly effective and even brought Norway two victories over the mighty Brazil.

Nevertheless, Wimbledon’s owners knew their compatriot’s regimented style might cause him problems in English football. And although Arsene Wenger had won the double with Arsenal the previous year (playing a very different kind of football to Olsen), the Premier League was a much more insular place than it is today.

“Egil Olsen is well aware of the problem with his image and he’s aware he has a great pressure on him on the field to produce results,” said Jan Petter Stortvedt, managing director of the parent company that owned Wimbledon. “He will focus intently on that and he will surely get respect in England.”

That proved to be wishful thinking. Olsen had long been fascinated by Wimbledon, even claiming they were one of two teams he dreamed of managing – the other was Brazil, naturally. But although his direct, route-one methods weren’t exactly uncommon in England in the late 1990s, Olsen struggled to endear himself to his squad and the tabloid press.

Wimbledon got off to a winning start that season, beating Graham Taylor’s Watford 3-2 on the opening day. That wasn’t Olsen’s first triumph over the Hornets legend, his Norway side had beaten Taylor’s England 2-0 in a qualifier for the 1994 World Cup.

Yet that defeat of Watford was a false dawn, as Wimbledon followed it up with a run of nine Premier League games without victory. Scoring goals wasn’t a problem – the Dons notched three against Newcastle and two against each of Middlesbrough and Derby – but clean sheets proved elusive. A 5-1 thrashing by Sheffield Wednesday in October pushed them into the bottom three.

Wimbledon rallied to beat Bradford 3-2 before losing just one of their next eight league matches while also progressing to the League Cup quarter-finals. A 5-0 demolition of Watford was particularly satisfying for Olsen, who justifiably argued it was always going to take time to get his ideas across to a team who had ended the previous season on a downward spiral.

Yet even during that positive run of form, there was discontent in the dressing room. The squad was bemused by Olsen’s zonal-marking system, an alien concept ridiculed by the media and dismissed by Kinnear with the pithy line: “spaces don’t score goals”. 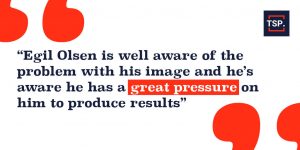 In an era where 4-4-2 was king, the players perceived Olsen’s 4-5-1 formation as inherently negative. Marcus Gayle was a reluctant left-sided forward, with Carl Cort – another player more accustomed to playing through the middle – stationed on the right. It was a tactic Olsen had used to great effect with Norway, attaching the 6ft 4in Jostein Flo to the opposition left-back and firing long diagonals towards him. Cort and Gayle were less willing participants.

“Everyone’s a bit confused by certain jobs,” Cort admitted. “I don’t think we’re anywhere near mastering it. I think it’s going to be difficult to play against teams, especially the top sides, with this system. Because we play a 4-5-1 formation, we are defending a lot and inviting pressure. Maybe against the lesser clubs we will be able to counter-attack and sneak a win but big clubs have so much quality coming forward they might tear us apart.”

Another issue, somewhat counterintuitively, was the siege mentality Kinnear had built. Wimbledon were famed for their ferocious team spirit for years, but the us-against-the-world mindset instilled among a close-knit group didn’t respond particularly well to the introduction of a Norwegian bloke who wore Wellington boots on the touchline. Olsen signed five of his countrymen, an Icelander and an Israeli that season, disrupting what had been an entirely English and Irish squad. Robbie Earle felt Olsen tried to change things too quickly. He had a point.

The manager’s individual oddities didn’t help his cause either. It wasn’t just the wellies, worn not as a fashion statement but to combat rheumatism. Drillo was a former communist who knew the height of every country’s highest mountain off the top of his head. He walked to training because he didn’t own a car and was known to stop strangers on the street to admonish them for smoking.

Vinnie Jones, the leader of a ragtag bunch of nonconformist outsiders who revelled in their Crazy Gang moniker, had no time for such eccentricity. “[My only regret was] I never got a chance to chin him,” Jones said. He’d left the club two years earlier.

Wimbledon won two of their three league games in January and ended the month in 13th, seven points clear of the drop zone. But that was as good as it got. A creditable 2-2 draw with Manchester United was all Wimbledon had to show for their next four outings, and a 2-1 win against Leicester City in mid-March proved to be their last of the season.

It was a season Olsen didn’t see out. A dismal run of seven successive defeats left Wimbledon hovering above the bottom three ahead of a crunch clash with Bradford, who were just two points behind. Wimbledon’s preparations weren’t ideal, with the division between dressing room and dugout now clear for all to see.

That description is probably a slight exaggeration, but now that we know what became of Wimbledon it’s clear relegation in 1999/00 was the beginning of the end.

Bradford ran out 3-0 winners at Valley Parade. The scoreline disguises the fact the visitors were the better team for much of the contest, only to disastrously shoot themselves in the foot. Two of Bradford’s goals came from set pieces as Wimbledon’s inability to grasp Olsen’s zonal-marking system was laid bare, while Hartson was needlessly sent off for foul and abusive language. A team famed for its resilience and never-say-die attitude was falling apart.

Olsen wouldn’t be in charge of the two remaining games. He was sacked after the Bradford loss, with assistant Terry Burton – a stalwart of the Crazy Gang era – stepping up in his stead. But it was too little, too late, and one point from a possible six wasn’t enough to keep Wimbledon in the division. Their Olsen gamble had backfired spectacularly.

“I thought I would see out the season,” the Norwegian huffed, “but there has been disloyalty from players. The comments from Joe Kinnear [Olsen’s predecessor had criticised him for not trusting the players that were Wimbledon’s “heartbeat”] didn’t help my case. I would never do what he did and criticise a manager before a crucial game. It’s bad timing but that’s the culture of English football.”

Defender Kenny Cunningham liked Olsen and said he wasn’t to blame for Wimbledon’s predicament, but it’s telling that other players were banned from speaking out after his dismissal. Olsen was understandably disappointed by how things had turned out in one of his dream gigs, but he certainly didn’t view his sacking as proof that his methods had been discredited.

As for Wimbledon, an eighth-place finish under Burton the following season wasn’t enough to secure an immediate return to the Premier League. Within three years of Olsen’s departure, the club had been relocated to Milton Keynes in one of the most controversial episodes in English football history. By 2004 they had a new name, a new badge, a new kit and a new fan base.

Olsen, meanwhile, had a period out of the game before taking over as Norway’s Under-19 manager in 2002. He later returned for four more years in charge of the senior side to round off his coaching career, but not before an unlikely spell as manager of Iraq. That curious move didn’t work out either, with Olsen lasting just nine months in the job – scarcely enough time to climb the Cheekha Dar, even if he could tell you it was 3,611 metres tall.