“I want to thank all the people who supported me and gave me one of the greatest experiences of my life,” Edgar Davids said upon his departure.

The legendary Dutch midfielder, who won the Champions League, six league titles and 74 caps for his country, wasn’t talking about his time at Ajax, Milan, Juventus, Barcelona, Inter or even Tottenham. For the man known as The Pitbull, a seven-game stint with Crystal Palace ranked right up there with the most enjoyable episodes of his career.

Palace fans might not feel the same. There was considerable excitement when Davids signed on at Selhurst Park in August 2010, joining Andy Dorman, Adam Barrrett and David Wright in George Burley’s summer shopping trolley. But the enthusiasm slowly drained away as Davids, who had essentially been retired for two years, struggled to adapt to the frenetic pace of the Championship.

Burley’s deployment of one of the outstanding box-to-box midfielders of his generation at left-back didn’t exactly help. After a string of disappointing displays against Scunthorpe, Derby and QPR, Davids terminated his pay-as-you-play deal less than two months after signing it.

As Palace stood back and reflected upon the unparalleled oddity of a Champions League-winning icon floundering for an unglamorous London club in an unremarkable English league, Barnet were looking for someone to hold their beer.

The Bees were in a precarious position when they approached Davids in October 2012. Having narrowly avoided relegation to the Conference the previous season, they had begun the new campaign as if they were desperate to play in the fifth tier. A 13-game winless run left Mark Robson’s side rooted to the foot of the League Two table, leaving Barnet fans to recall Jasper Carrott’s line on the experience of supporting Birmingham: “you lose some, you draw some.”

There was still plenty of time for the north London club to pull themselves out of danger and chairman Anthony Kleanthous had a novel plan up his sleeve – he approached Davids, who was living nearby, with a view to him becoming player-joint-manager alongside Robson. The dreadlocked Dutchman said yes.

Robson was struggling in his maiden managerial job and some questioned the wisdom of installing another coaching novice alongside him. That depiction of Davids wasn’t strictly true, though. As well as turning out at his local Powerleague, he had spent the past few months in charge of Sunday league side Brixton United. The way Barnet had been playing, this wasn’t much of a step up.

Joint-managers had gone out of fashion by the early 2010s – and for good reason. This looked like a particularly inauspicious partnership. Robson and Davids were from such vastly different backgrounds they made chalk and cheese look like siblings. Quizzed about this upon his arrival, Davids did little to assuage the concerns.

“We will clash. It’s not a case of if,” he told BBC London. “It’s going to happen. The most important thing is what you get out of it. Through those fights we will grow.”

Davids’ first game in dual charge ended in a 4-1 home defeat by Plymouth, but an upturn in fortunes was just around the corner. Barnet finally won a league game at the 13th time of asking, thrashing Northampton 4-0 at Underhill. Davids played the full 90 minutes – in central midfield, thank you very much George Burley – and won the Man of the Match award. Barnet proceeded to take seven points from the next nine available while registering four consecutive clean sheets.

A six-game winless streak, which began with a 4-1 loss to Morecambe in mid-November, brought the Bees back to earth with a thud. Inconsistency seemed their forte, though, and back-to-back wins against Burton and Gillingham either side of Christmas lifted them out of the relegation zone and gave the fans some festive cheer. Davids, as was inevitable given his profile, had quickly become the face of the club, with Robson an increasingly peripheral figure. Director of football Paul Fairclough had affirmed Robson had a “job for life” at Barnet as recently as October. He left the club on 28 December. 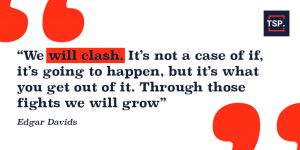 That left Davids in sole control of first-team affairs, but results continued to oscillate. Barnet had certainly improved since the Dutchman’s arrival, but problems remained. The Bees had a tendency to start games slowly and they were often blunt in attack. Davids had brought some much-needed aggression to the engine room but occasionally overstepped the mark: he was sent off late on in a 3-2 defeat by Accrington in March, leaving Barnet outside the relegation zone on goal difference alone.

The Bees showed tremendous resilience in their next four outings, winning two, drawing two and keeping clean sheets in each of them. Yet they couldn’t maintain that form through to the end of the campaign. Two defeats from their next three games denied Barnet the chance to secure their League Two status before the final day. Going into that 46th match of the season, Davids’ side were 22nd in the table, just one point above the dreaded dotted line.

A 2-0 loss to Northampton might have been academic had other results gone their way. But they didn’t. A 2-1 win over Fleetwood saw AFC Wimbledon climb out of the bottom three at the last possible moment, sending Barnet and Davids down to the Conference.

Despite the team’s relegation, Davids had done a pretty good job in his first season as a manager. He inherited a side low on confidence and short of points, yet almost immediately made a positive impact. Barnet played some attractive football at times and they would almost certainly have stayed up had Davids arrived in August rather than October. Extrapolating the Dutchman’s points-per-game record across the season as a whole would have given Barnet a sufficient tally to finish in the top half.

Davids committed his future to the club over the summer, announcing his intention to lead the Bees back into the Football League at the first time of asking. In hindsight, Barnet must wish he hadn’t bothered. At the time, though, chairman Tony Kleanthous couldn’t hide his delight.

“He’s started a football revolution here and we hope we can maintain the attractive style of play we developed under him in the Football League,” he gushed. “It’s a measure of the man that he wants to stay to finish the job he started. Once a Bee, always a Bee.”

Davids bizarrely took the No.1 shirt for the 2013/14 season in a bid to start a trend that, seven years later, has yet to catch on. He also made it clear he wouldn’t be bothering himself with the hassle of attending any away games that required an overnight stay. He was only the manager after all.

Despite all that, Barnet made an excellent start to the campaign, winning four and drawing two of their first six games to underline their promotion credentials. Things took a turn for the worse thereafter, though, and a run of four matches without a win persuaded Davids to dust off his boots and take to the field for the first time that season.

Davids had always been a combative competitor, but he took that style to new extremes in 2013/14. The extent of his ill-discipline was extraordinary for such an experienced individual who was supposed to be setting an example. Davids showed such disregard for the laws of the game and the limbs of his opponents that Conference referees might as well have got his name printed in their notebooks. A remarkable run of three red cards in five appearances showed things were beginning to unravel for Barnet and their bespectacled boss. Not that Davids saw it that way.

“I think I know for definite now that the league is targeting Barnet,” he huffed after one early bath. “I don’t know how many games we’ve played now but there is weird decision-making all the time. It is ridiculous. I don’t think I’m going to play anymore.”

That was probably for the best. Time seemed to have caught up with Davids during his ever-dwindling minutes on the pitch. The 40-year-old had performed pretty well in League Two the previous year, but even fine wine has a use-by date. Davids deployed himself in a variety of roles – at full-back, in midfield, as a No.10 – but to no avail. The sight of this legendary Champions League winner toiling in England’s non-league remains among the most incongruous images of recent times.

The axe finally fell in January 2014, on the same day Barnet beat Grimsby 2-1 at Underhill. Davids’ departure was officially by mutual consent, but the club were clearly relieved to put the episode behind them. “What has been missing from Edgar’s philosophy was winning games of football,” said Paul Fairclough, trying to be polite.

Davids retained an interest in the non-league game after leaving Barnet and within months he was in talks with Greenwich Borough over a potential move. Club chairman Perry Skinner declared he was “70 per cent sure he’ll come on board”, but in the end the Dutchman decided against it.

Even for him, a player-ambassador role at a club in the Southern Counties East Football League was a step too far.