As the referee blew the final whistle on the second leg of the Women’s Campeonato Brasileiro semi-final, the Iranduba players slumped to their knees, disappointment and exhaustion writ large upon their faces.

The effort had been gargantuan but in the end it was not enough for the women in dark and light green hooped shirts to overcome Santos and make it to the final of the competition for the first time.

The aggregate score of 5-3 made it look relatively comfortable for Santos. It had been anything but. Going into the last ten minutes the score was 2-2 on the night and 4-3 on aggregate. A single goal would have taken the team from the Amazon through. Iranduba probed and pressed, throwing caution to the wind, but they couldn’t find a breakthrough and, in the dying seconds, they were picked off as the Santos captain Brena struck the knockout blow – a marvellous 35-yard effort worthy of winning any tie.

Despite the anguish caused by hitting the canvas in the penultimate round, this will be remembered as the most remarkable of achievements for Iranduba, a club from a town of just over 40,000 in the middle of the Amazon jungle that has managed to draw the nation’s attention to the Brazilian women’s domestic game like never before.

The state of Amazonas is the sleepiest of footballing backwaters and hasn’t had a team in any of Brazil’s top three men’s divisions since São Raimundo were relegated from Série C in 2007. Iranduba’s march to the semi-final of the national championship this year was the best ever performance by a side from the Amazon in a national competition and has restored the sporting pride of the region’s residents.

As proof of that pride we need only to rewind a week from that semi-final second leg in Santos to the first game in the Arena Amazônia, the huge stadium constructed in Manaus, Iranduba’s neighbouring city, for the 2014 World Cup.

25,371 locals packed into the Arena to cheer on their team. It was by far the biggest crowd at a women’s club game in Brazil, breaking the record of 15,107 set at the same stadium for this year’s quarter-final between Iranduba and Flamengo. It even outdid the 22,433 that attended this year’s Women’s Champions League final in Cardiff. In a country where it was illegal for women to play the game until 1979, and a national women’s league did not exist until 2013, that is a spectacular feat.

On the day before that crucial second leg against Santos I spoke to Lauro Tentardini, Director of Women’s Football at Iranduba, who told me that the idea behind the establishment of the club, which has only existed since 2011, was to develop both the men’s and women’s games in the Amazon region.

Iranduba was the brainchild of a number of business people and former players who had grown tired of other Manuas-based sides’ consistent failure. The club can even count legendary World Cup-winning goalkeeper Taffarel and ex-Seleção right-back Paulo Roberto amongst its founding members. Neither is involved in the day-to-day running of the club but, Tentardini says, they both come to lend a hand when their schedules permit.

The club was initially established in tiny Iranduba, rather than its more substantial neighbour Manuas, Tentardini recounted, “because [in 2011] there weren’t any stadiums in Manaus. The Vivaldão [which stood on the site where the Arena Amazônia is now] had been demolished, the Colina [another traditional ground in the city] was undergoing reforms and to register a professional team it had to be in a city with a stadium. The closest was Iranduba.”

The World Cup, and the facilities that came with it, gave the club the opportunity to move across the Rio Negro and into the city of Manuas for good, which has in turn gave them a new lease of life. “The players study there, go to university, live there, train there in the World Cup training centres and play in the Arena Amazônia,” Tentardini explained. 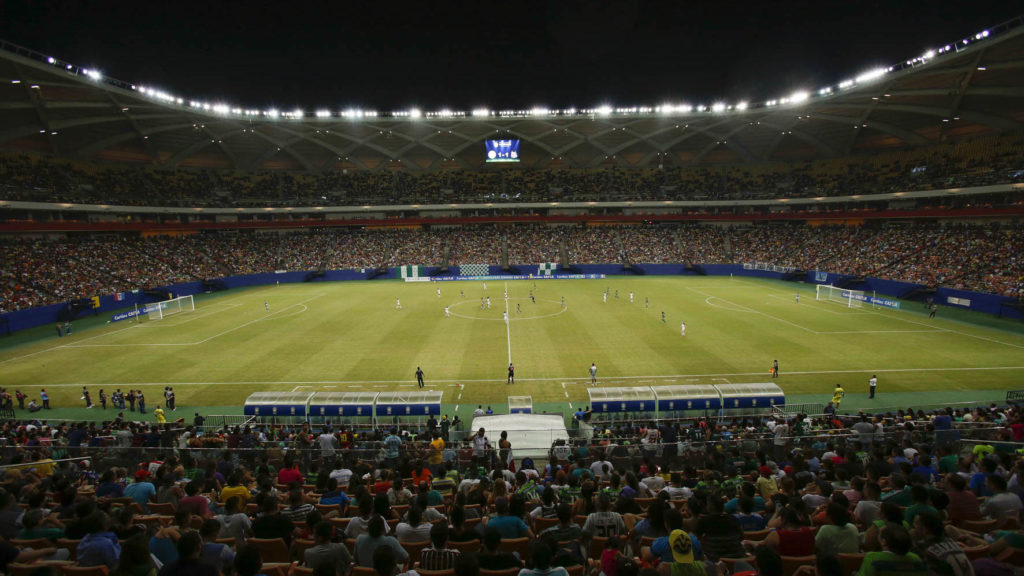 Joining us on the side of the pitch at Santos’ Rei Pelé training centre was Thiago Durante, Stadium Manager for the Amazonas state government. I put it to both of them that the Arena was a white elephant that served no purpose other than lining the pockets of those who constructed it. “People talk a lot of rubbish,” Tentardini scoffed, before pointing to his colleague as if to say, ‘refuting these accusations is your job’.

Durante willingly obliged, telling me that the plethora events held at the Arena – from huge concerts, weddings and cultural festivals to out-of-state football matches like last year’s Rio derby between Flamengo and Vasco – are making a substantial contribution to the development of the local game.

“[The Arena] is open without cost for Amazonian football…the games played by clubs from outside the state and the private events cover the costs for local teams. It means we can open the doors for free to Iranduba so they can get crowds like the 25,000 [against Santos].”

To put it into context, that crowd of 25,371 was higher than the year’s best attendance at several top-flight men’s clubs at the time of writing. Vasco Da Gama (21,895), Atlético Mineiro (22,284), Chapecoense (19,005) and Sport Recife (23,065) all fall short. The Arena has also been used for several Seleção feminina games over the past year and has turned Manaus into the leading city in the country when it comes to women’s football.

“All the money [from ticket sales],” Durante continued, “goes to Iranduba. The [Amazonas state] government doesn’t get anything.” He did not deny, though, the fact that the stadium is still making losses for the state. “If we break even it will be fantastic,” he added, apparently confident that they could make it happen in the not-too-distant future.

Given his job, Durante’s optimistic prognosis can be taken with a generous sprinkling of salt but Tentardini enthusiastically backed him up, saying that because of the World Cup “we have facilities that few other women’s clubs do, if any. Next year we hope to pull very big crowds.”

If they can indeed attract attendances of more than 10,000 on a regular basis, Iranduba’s women may well have turned a white elephant grey.

In 2013 the club, known to locals as ‘the Hulk of the Amazon’, were one of the 20 pioneers that took part in the newly-formed Women’s Campeonato Brasileiro. But in the first few years they struggled badly, failing to get past the first group stage in 2013, 2014 and 2015. They didn’t manage to win a single away game in that time.

When Tentardini took over as Director of Women’s Football at the beginning of 2016 he found Iranduba unprepared, psychologically and financially, to battle for trophies with more established sides like Corinthians, Santos and Flamengo. “I’m not going to deny that it was difficult when I arrived,” he said. “There wasn’t a professional mentality, they only trained as and when, the players didn’t even receive a salary.”

Since then, he has transformed the club root and branch, leading them past the group stage for the first time in 2016 and into that momentous semi-final this time around. 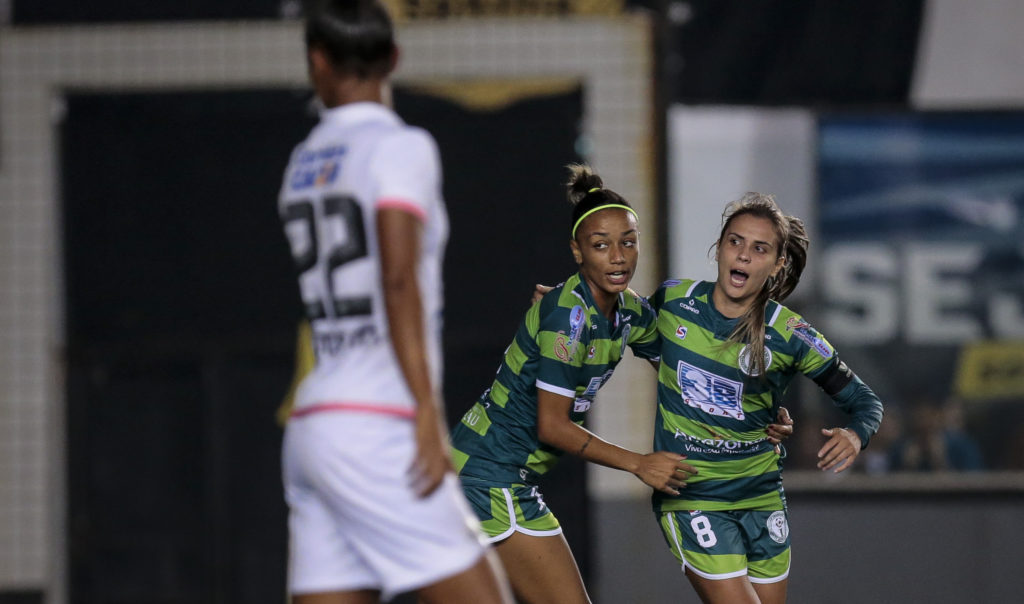 He brought in a number of players he had worked with in his previous role as Director of Football at SE Kindermann, a women’s club from Santa Catarina state, and other young talents from clubs in more traditional footballing heartlands.

Several of those players have proved invaluable, in particular 22-year-old central midfielder and captain Djenifer Becker, who arrived from Kindermann in January 2016, and striker Kamilla Morais, contracted at the beginning of this year from Rio Preto. They were Iranduba’s stand out performers and joint-top scorers over the length of the campaign.

Their success, however, has silenced any dissenting voices and quickly propelled them to the point where they are now the best-supported club in the region. Kamilla, talking before the second leg of the semi-final against Santos, said that this season people “have really embraced the team” and that the feeling of walking out in front of 25,000 for the first leg against Santos was “inexplicable”.

Owing to their fantastic individual performances both players were recently called up by national team manager Emily Lima for a friendly against Germany in Heidelberg. Kamilla told me that receiving her first international call-up was “incredible. It’s amazing when something that you’ve always longed for happens.” Working with the national team, she added, gave her the opportunity “to learn a lot from the other players and Emily [Lima].”

Kamilla’s path to international recognition has been far from easy. She grew up in a disadvantaged community in Belo Horizonte and when she was fifteen became pregnant with her daughter Kamilly, now aged six. As recently as 2015 she was working on the till at a local restaurant when a friend came to her saying that Rio Preto, a professional women’s team from São Paulo state, were looking for a forward. She went for one trial and they immediately signed her up.

Since then, Kamilla’s rise has been as meteoric as that of the club for which she now plays. In her first year as a professional she won the Campeonato Brasileiro and in her second finished as runner-up in the Copa do Brasil. This year she has moved to Iranduba where she has once again gone far in a national competition and has received that long-dreamed-of opportunity to play in the famous canary yellow shirt of the Seleção.

As well as reinforcing the squad, Tentardini remodelled the infrastructure surrounding the club. Iranduba now provide the players with a place to live, a full-time cook, bursaries to continue their education, transport to and from training and a decent wage. At this moment only Santos and Corinthians invest more in their women’s teams than Iranduba. The provision of a stable environment and good working conditions has clearly paid off. “It permits us to concentrate on doing as well as possible [on the pitch],” said Djenifer.

The new format of the Campeonato Brasileiro this year, with bigger groups meaning more games, has also helped to attract consistent attention in the local media and build a solid fan base.

The manager Sérgio Duarte, who during his playing days took in spells in such exotic locations as Rio de Janeiro, the Algarve and Dunfermline, told me that the firm foundations on which he has to build help a lot, in particular the advanced training facilities used by the club which “allow my work to flow”. Such stability and developed infrastructure is a rarity in Brazil, he acknowledged.

Iranduba can perhaps serve as an example for other Brazilian clubs, regardless of the gender of their playing staff.

After the dust had settled on their historic campaign I spoke again to the captain Djenifer, who was in the USA as part of the Brazil squad contesting the Tournament of Nations after her second successive call-up.

Reflecting on their achievements, Djenifer said that she only “realised after the course of the tournament the impact that we had. Manaus gave a boost to women’s football, showed other states that they can pull big crowds and brought more fans to the stadiums. We’ve taken a little step forward for women’s football in Brazil, I hope that other clubs manage to profit with big crowds like we did in Manaus.”

“It was because of a few small details that we did not win the title this year,” she continued. If Iranduba continue along their current trajectory, that first title will not be long in coming.

More importantly than any silverware, though, Iranduba have laid down a marker for which all clubs will now aim. With this unprecedented commercial success, they have shown that a bright future may well lie ahead for the women’s game in a country where it has been vastly undervalued for far too long.