Duncan Jenkins’ death is better known than his life. The mortal wounds were inflicted on Wednesday 22nd August, 2012 over a two-hour meeting at Evuna, a low-key tapas restaurant on Deansgate in central Manchester. Two months later, a senior Liverpool official was revealed as the man across the table, marking the end for Jenkins and the start of surreal, tragi-comic scandal.

In life, Jenkins was a ‘perspiring’ football writer who couldn’t write. A wannabe without an ounce of self-awareness, but a surplus of self-belief. So far, so unremarkable. But his connections at Anfield seemed impeccable.

In his pomp, he spent the season revealing Kenny Dalglish’s team line-ups ahead of their announcement, and then the summer calling his firing, Brendan Rodgers’ hiring and the signings of Joe Allen, Fabio Borini and Nuri Sahin. Jenkins’ mangled metaphors – heads were stuck above ‘parrot pits’, ‘guilt-edged’ chances were missed – became irrelevant. His 40,000 Twitter followers waited impatiently to dissect every butchered cliche that emerged from his Skelmersdale screen.

But Jenkins didn’t live in Skelmersdale. He didn’t have any contacts at Liverpool. He didn’t exist at all. Sean Cummins – a 39-year-old copywriter in Manchester – was the brains Duncan lacked. Sitting at home in Manchester, he playfully shredded football’s phrasebook, regurgitated rumours and watched his alter-ego’s numbers and profile soar. 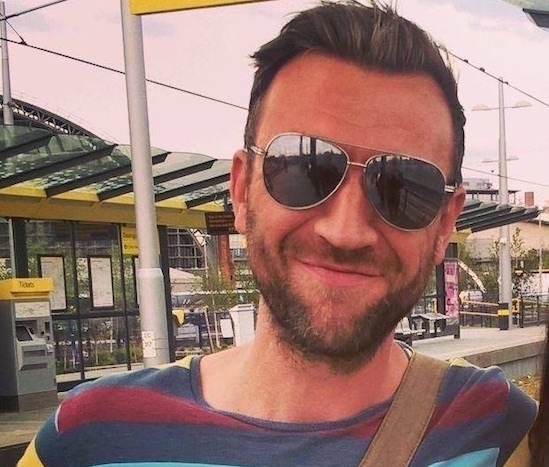 Duncan had begun life in 2009 as a user on Est 1892, a forum that Cummins, a Liverpool supporter, frequented. “I tried to wind up a couple of the lads on there by creating this character who would blunder about making a fool of himself on any number of topics. It wasn’t just football, he would go into discussions on records or films,” he says.

“There was a thread about the Wire and he went bounding in and said it was crap and not as good as the Bill. He straddled that fine line between fiction and reality. He was ludicrous, but people couldn’t tell if he was just an idiot or someone having a joke.”

Jenkins would irritate or amuse, but he could not be ignored. He attracted a cult following and, with a picture Cummins pinched from a blog – “I just googled something like ‘simpleton with crap hair'” – he transferred to Facebook.

There Jenkins expressed his creative side with gloriously off-kilter ‘poims’ eulogising Gary Lineker and Gary Neville. He was petering out however, before Cummins noticed a niche on the relatively new platform, Twitter. “I saw a raft of people on there claiming to be football writers, but who had no discernible employer,” he says.

“They would fill their accounts with a kind of pseudo-football writing. I imagine it was mostly young lads, wanting to get into journalism. Some were good, some not so good. People say that Duncan is a piss-take or a parody. He wasn’t. He was a desperado who wanted to be known and taken seriously. I just thought it was a good vehicle for him.”

Cummins was right. Transfer gossip – once packaged up behind premium-rate phone lines or scattered across hundreds of club-specific forums and threads – was the currency fuelling a follower boom. For loud-mouthed Jenkins, now focused on his ambitions as a ‘perspiring football journo’, it was as if he had moved from a speakeasy to Speaker’s Corner. And his creator knew how to draw a crowd.

“Someone used to come on Est 1892 on matchday, long before the team was officially announced, drop the line-up and leave,” says Cummins. “They wouldn’t interact at all, just do this and get it right every time.

“I realised that if I nicked this and posted it as Duncan on Twitter, it would give him an apparent insight, in contrast with his complete lack of skills and self-delusion. That juxtaposition fuelled the confusion and ambiguity about what Duncan was, whether he was genuine. That was the single biggest thing that drove his growth in followers.”

Duncan’s other Liverpool scoops were Cummins’ educated guesses as he sifted the white noise around Liverpool’s transfer dealings. “Joe Allen was a simple case of two plus two equals five,” he confesses.

“There was the fact that he had worked with Rodgers at Swansea combined with a small part of a story in the Independent in January, when Dalglish was still manager, saying that Liverpool had scouted him. I put those two together, put it out there, it transpired and that made Duncan look like he had an in.”

Duncan’s prediction of Fabio Borini signing from Roma was a similar punt based on passing comments Rodgers had made to a Liverpool Echo reporter. His assertion that Nuri Sahin was Anfield-bound was an opportunistic piggyback on Times reporter Oliver Kay’s similar tweet just seconds earlier.

There were misses – Gylfi Sigurdsson and Andre Villas-Boas were touted and never arrived – but even they added momentum. “If you wanted to dig back and work out where the rumour had come from you could, but people don’t care,” says Cummins.

“The frenzy is such that they don’t care where it has come from and whether you are first, second or third or whatever. Duncan got loads of stuff wrong, but it didn’t matter. The numbers kept growing because when a rumour is live, people are dying to know. It became a self-fulfilling thing. Duncan had 40,000 followers which gave him more credibility and made people more inclined to follow.” 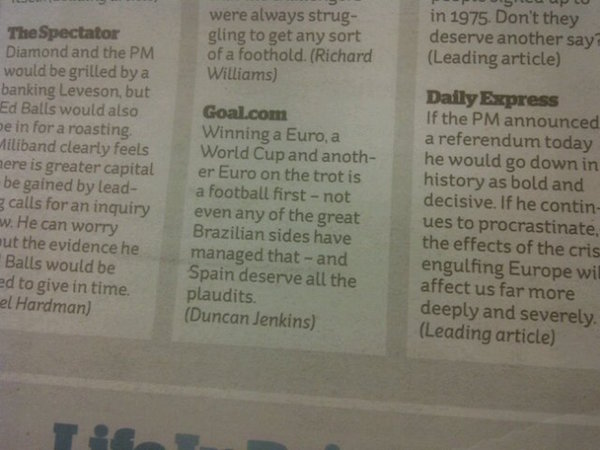 Forty-thousand followers may sound featherweight compared to some of Twitter’s big beasts now. The Times’ Henry Winter delivers 140-letter pearls to 1.2 million people, for instance. But, allowing for nearly five years of inflation, Jenkins was a significant noise.

One week in January 2012, he was the 10th most-recommended UK Twitter account on the Follow Friday trend, ahead of pop urchin Louis Tomlinson and Stephen Fry’s silica-dry wit. Such was the dedication of some of his fans that they even tracked Jenkins’ phoney profile image back to its actual owner – a bemused journalist in the United States – and peppered him with questions about a man he had never heard of in a sport he knew nothing about.

Meanwhile Cummins, in character as Jenkins, held a webchat with Liverpool fans in Delhi and wrote columns for the Football Ramble and Goal. “It was a buzz to see the numbers go up,” he admits. “Initially people loved his schtick, but then many more just followed for the information. The whole ‘ITK’ (in the know) thing was huge then. It was that guy with the line-up on Est 1892 – my best guess is that it was a mate of Jay Spearing’s – that they were all chasing really, not Duncan.”

It was not just click-happy rumour junkies. Rather than faking the news, Duncan was starting to break it. His hit rate had attracted the attention of journalists – broadsheet chin-strokers, television talking heads and shout-radio stirrers alike – who would ping him direct messages to chew the fat and cross-check their own Liverpool tip-offs.

“I would have to play along. I stayed in character with replies full of misspellings and factual errors, usually saying that I had heard similar, maybe add a little detail. Of course this was great for Duncan as a character. He didn’t have to worry about standing stuff up. He would go straight on Twitter and repeat whatever he had been told. To an outsider looking in you would think these mainstream journalists’ sources are really solid, not a clown on Twitter.”

Jenkins was not the only new media chancer to sucker in old school operators during the the headlong rush to social media. The Daily Mail were stitched up when another Twitter account – FootballAgent49 – appeared to be the source of their Kaka-to-Manchester United story before coming clean as a teenager with no links to the football industry at all.

Dream Team reject Didier Bapiste, Moldovan prodigy Masal Bundev, and the cunningly-named Yerdas Selzavon are just three fictional players to have slipped their markers online and appeared in the press. But Duncan Jenkins was the most famous, funny and convincing purveyor of ‘fake news’ at a time when demand for sensation outstripped supply of genuine information.

His work had not gone unnoticed at Anfield. In August 2012, just after the start of the season, Cummins says he was surprised by a message from the club’s new director of communications, Jen Chang. “My mum thought he was going to offer me a job!” says Cummins of the meeting proposal. He emphatically did not.

Over lunch at Evuna, Cummins says Chang told him Duncan’s tweets had cost the club hundreds of thousands of pounds as selling clubs hiked transfer fees in response to his ‘leaks’. According to Cummins’ account of their meeting – which Chang has described as “absolute nonsense” – Chang allegedly threatened to revoke his season ticket and said fans would post dog shit through his letterbox should his identity be revealed.

“I remember everything he said to me,” says Cummins more than four years on. “It was the most surreal experience of my life.”

After an attempt to go public via a newspaper failed, Cummins went solo, publishing a blog entry that outed himself as the man behind Duncan, effectively killing off the character and giving his account of the meeting with Chang.

A firestorm of online comment and conjecture followed. Was this ‘revelation’ genuine or just another layer in the conceit? Some saw it as an attempt to embarrass an embattled club. A picture of Cummins and his son did the rounds in some forums, along with vague threats of violence. An anonymous blog appeared to slander him. As the campaign against him rolled on, Cummins asked former Blur guitarist and friend Graham Coxon for a tweeted character reference, which he duly supplied.

“I’m embarrassed by that now,” he says. “I just thought I needed a bit of positive PR because that noisy minority against me were pretty noisy. Looking back it seems ridiculous because there are a lot more serious and worse things that can happen.

“I would go for a walk down by the river sometimes to clear my head and look at all these people were walking past, none of them knew. It was all just online idiocy and yet I would go home, sit on my computer and disappear down this horrible rabbit hole once again and feel like the world was against me.” 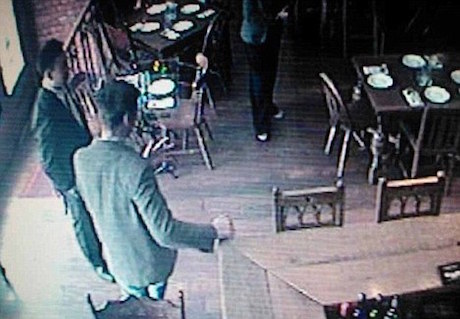 When reporters asked Chang for his side of the story, he dismissed the episode, saying it had been entirely fabricated. But Cummins tracked down CCTV footage of their supposed meeting in Manchester and was invited to Liverpool’s Chapel Street offices to speak to managing director Ian Ayre.

After repeating his account of meeting Chang and taking the club chief executive through extensive print-outs showing messages, emails and the public sources for Duncan’s insider information, he was given a written apology. Chang left the club two months later.

“I wanted Jen Chang to lose his job, don’t get me wrong,” says Cummins. “I think if I met him now though, I would shake his hand and just want to forget about it.”

Chang’s previously bustling Twitter account is now a cyber Marie Celeste. Despite a constant stream of updates before, and a job with the New York Cosmos since, it has been dormant since 22 October 2012, just prior to his exit from Liverpool. A Reds fan, whose previous role was soccer editor at Sports Illustrated, he lasted only six months in his first media relations job.

The fans that hung on Jenkins’ every word, the journalists convinced of his insight, even a shell-shocked Cummins, misjudged the new world emerging online. “I didn’t have anything to lose,” says Cummins. “If you are a journalist, you have to suck it up. You don’t want to piss off the director of communications at Liverpool because you might lose access or whatever.”

Becoming the story, rather than just reporting it, was the way Jenkins would have wanted to go.

The Set Pieces attempted to contact Jen Chang to gain his account of the events detailed above.