I fall into conversation with the long-haired pibe at the threshold to the shrine. The entrance door is locked when the guy pulls up on his bicycle. He leans his bike against a wall, which is scrawled with messages of devotion to Maradona.

He is young, much too young, to recall the maestro in his pomp, but tells me of his admiration. I describe to him how I sneaked away from exam revision to watch the match live in 1986. I say that I think Maradona was the greatest player to ever live. 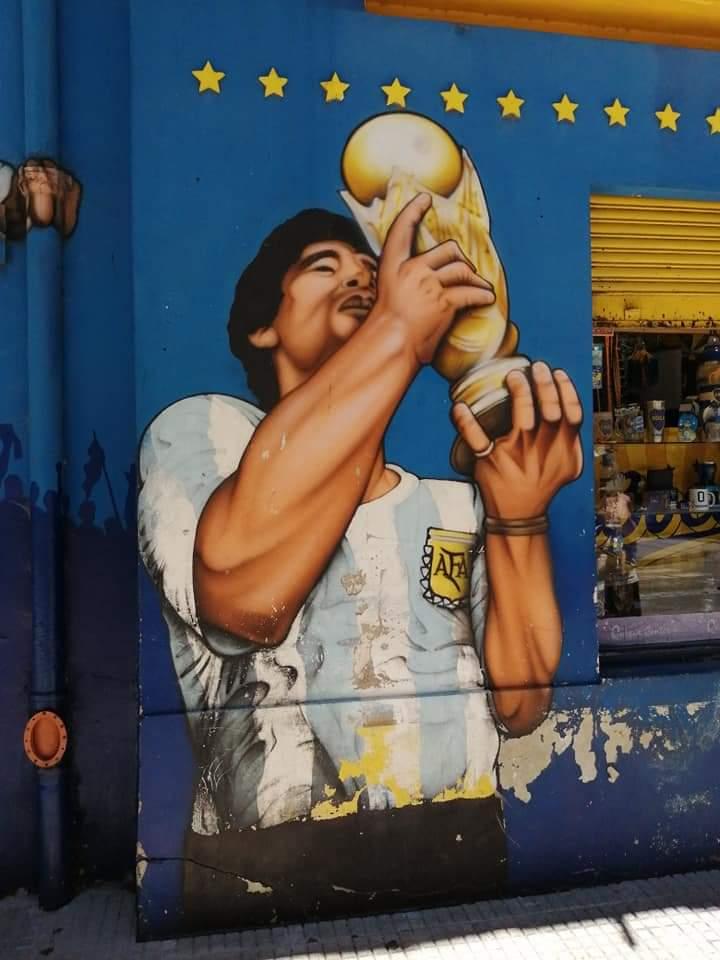 “But you are an inglés.” The bars of the jail-like door swing open. We enter a small, candlelit space. On one wing, scores of football shirts deposited by fans. On another, more objects of devotion, from punctured footballs to statuettes. Through the centre there are pews, leading to an altar adorned with a statue of the Virgin of Luján, the patron saint. Above her, an oversized picture of Maradona. The greatest number 10, repositioned as the big man upfront.

I stumbled upon the shrine as I walked the streets of the La Paternal district in Buenos Aires. I had gone to La Paternal to admire the murals painted across the neighbourhood in the time since Diego Maradona’s death in November 2020. La Paternal is home to Argentinos Juniors, Maradona’s first professional club, where he shot to stardom between 1976 and 1981.

The Maradona-themed art I encounter on the stadium’s walls is thrilling. Mostly, because of its rarity value. The La Paternal murals depict Maradona in the red-and-white strip of Argentinos Juniors, rather than the familiar shades of blue he wore with Napoli, Boca Juniors and Argentina’s national team. 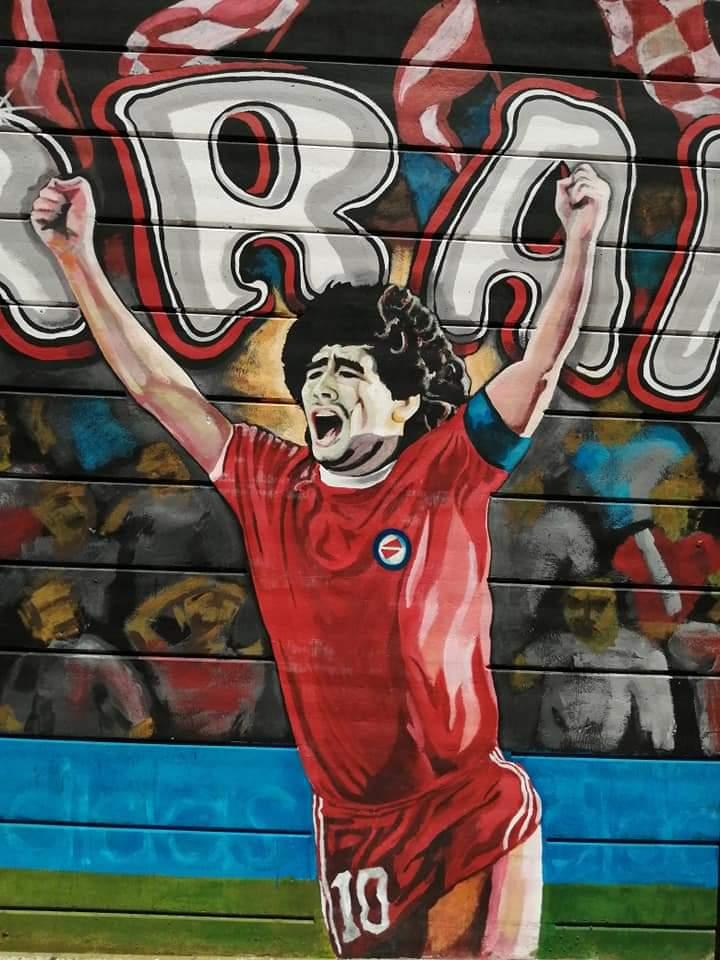 I also like them because they capture Maradona as the budding superstar in the years before the glory and subsequent fall. They portray a cherubic, preternaturally gifted footballer who fizzed with youthful exuberance and glittering promise. There is the 1970s big hair and smiles, bulging thighs as he dribbles across the stadium walls. They capture Maradona as the gifted innocent, before his slide into 1980s excess.

It’s easy to get close to the art on the stadium’s walls. Like most football grounds in Buenos Aires, the Argentinos stadium lies at the heart of its neighbourhood and is ringed by residential houses on narrow cobbled streets. I find myself free to approach to within touching distance of the stadium’s red-and-white painted walls, which are topped by barbed wire and overlooked by rusting metal beams supporting the stadium’s crumbling concrete stands.

One mural I see depicts Maradona sporting angel wings. “He escaped from a dream, they say,” runs the caption. Another captures the moment he celebrates a goal, rushing towards the crowd, chest bursting, mouth agape. “Paternal, home to God,” its big, red letters scream. Around the corner from it, a painted mural of a young Maradona covers an entire side of a two-storey building. “Pride of a barrio,” this one beams. 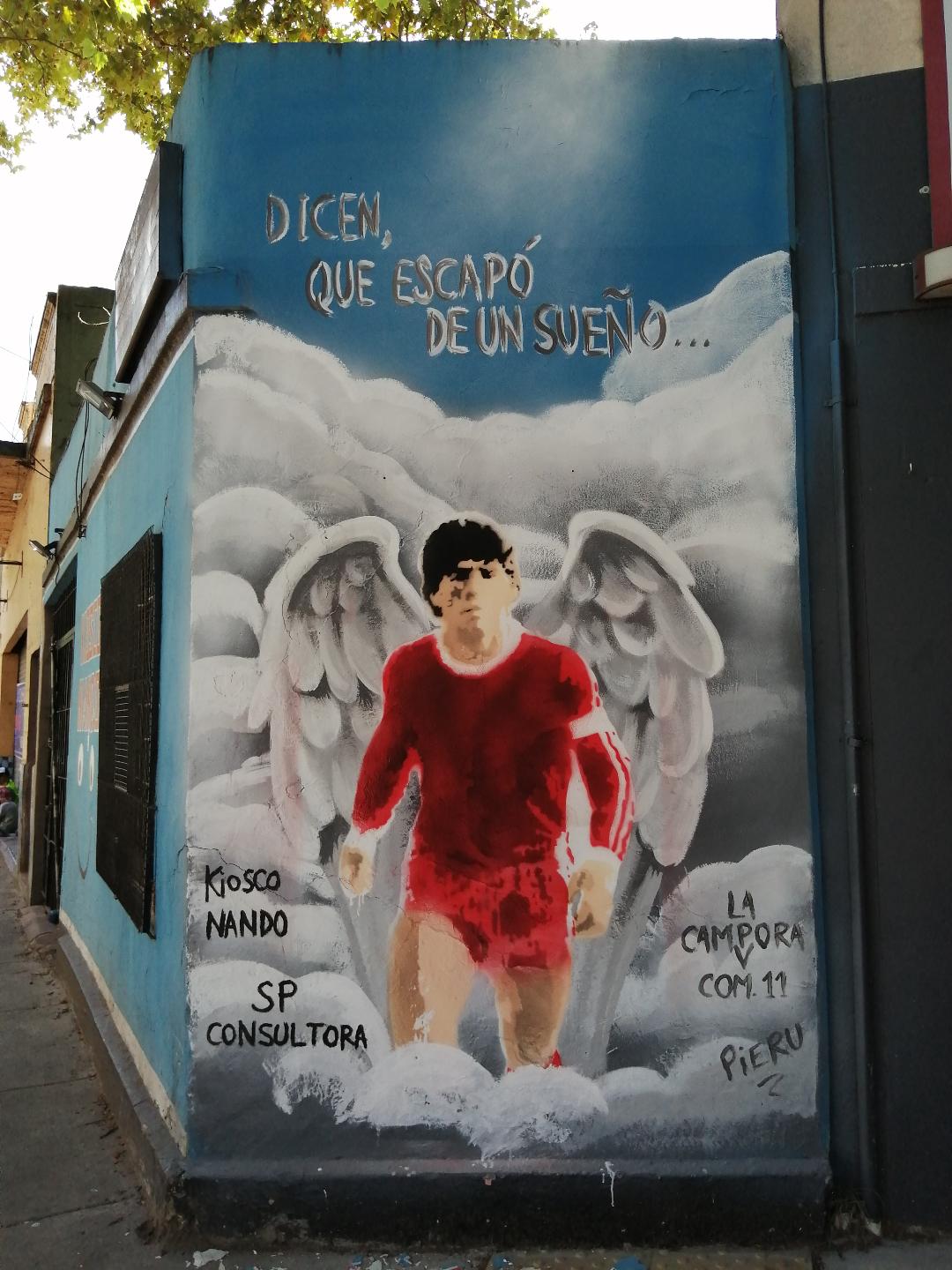 If La Paternal was cradle to Maradona’s monstrous talent, La Boca became his spiritual home. The old port district of Buenos Aires is a ramshackle grid of repurposed tenement buildings and abandoned port warehouses. Part of Buenos Aires’ romanticised but impoverished southern quarter, it faces the Riachuelo river, a polluted soup of a waterway.

At the neighbourhood’s heart, rise the sheer, steep walls of the La Bombonera (The Chocolate Box in English) stadium. Painted in blue and yellow, this crumbling cavernous structure is home to Boca Juniors, Argentina’s biggest, most successful football club.

From the street, I peer up at the giant, pitted stands that cage in 60,000 fans on match days. I remember vividly the matches I witnessed at the stadium when I lived in Buenos Aires. The 60,000 jumping up and down in a kind of delirious-yet-metronomic unison – like a throbbing heart – as the 1950s concrete swayed underfoot, raising the hairs on my neck. It’s an electric, febrile bearpit. Maradona, who played for Boca in two separate periods, was the personification of the club’s overarching ethos. Boca is – and he was – the champion of Argentina’s sizeable impoverished minority. 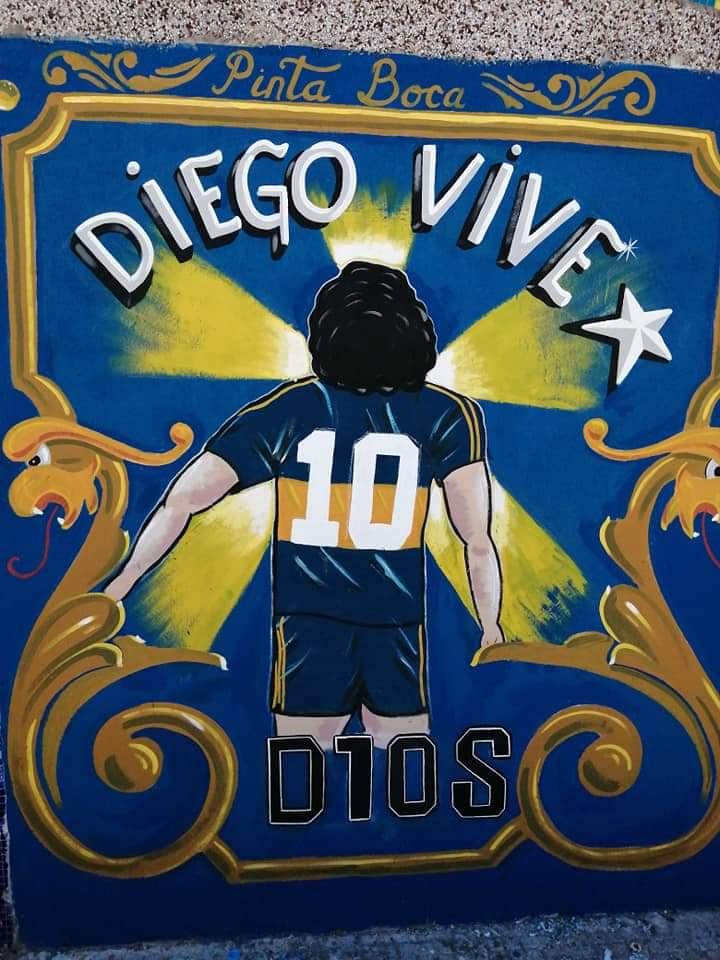 I walk to the stadium’s eastern side, where I know there is a sizeable gap in a service door. I peer through it as I did numerous times before. I glimpse the stadium’s inner sanctum, its three sweeping tiers, layered on top of one another. Each tier overhangs the pitch, creating a dizzying, vertical effect.

I search for the murals in the La Boca neighbourhood. One pictures Maradona in 1986. Above it, a caption reads: “He is not Christ, nor Buddha. He is not Allah, nor Mohammed. He is of the Argentine people, the one, the only Diego Armando Maradona.” His image is omnipresent. “Diego lives. Eternal Diego. Thank you, Diego,” are common refrains. 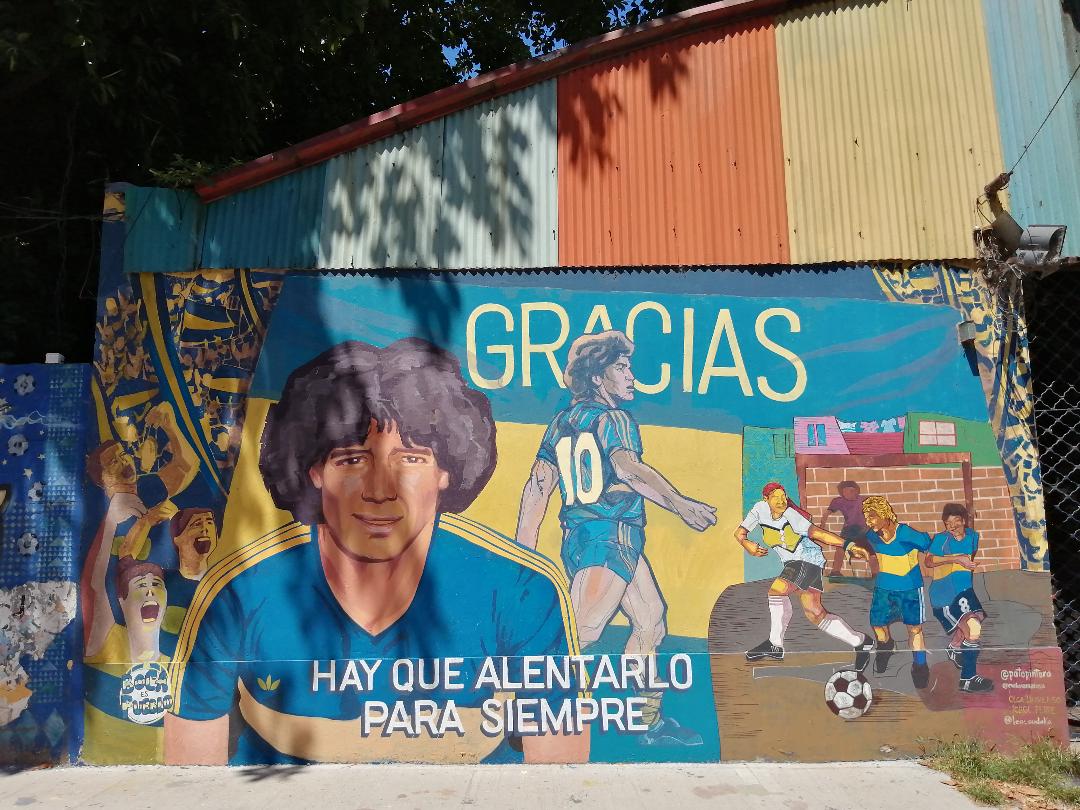 The biggest artwork covers one side of an abandoned industrial building close to the contaminated river. It reimagines Maradona in the image of St. Peter, draped in a cape and holding a staff topped by a Tango football of the type used at the 1986 World Cup. A golden halo crowns the image.

It makes me recall the long-haired pibe and the visit to the shrine, a repetition of the ideals of deity and saintliness – ironic, some will say, for a footballing immortal who was so painfully human off the pitch. Yet fans, young and old, keep coming. They pay their respects, lay hands on his image, close their eyes, seeking divine intervention. 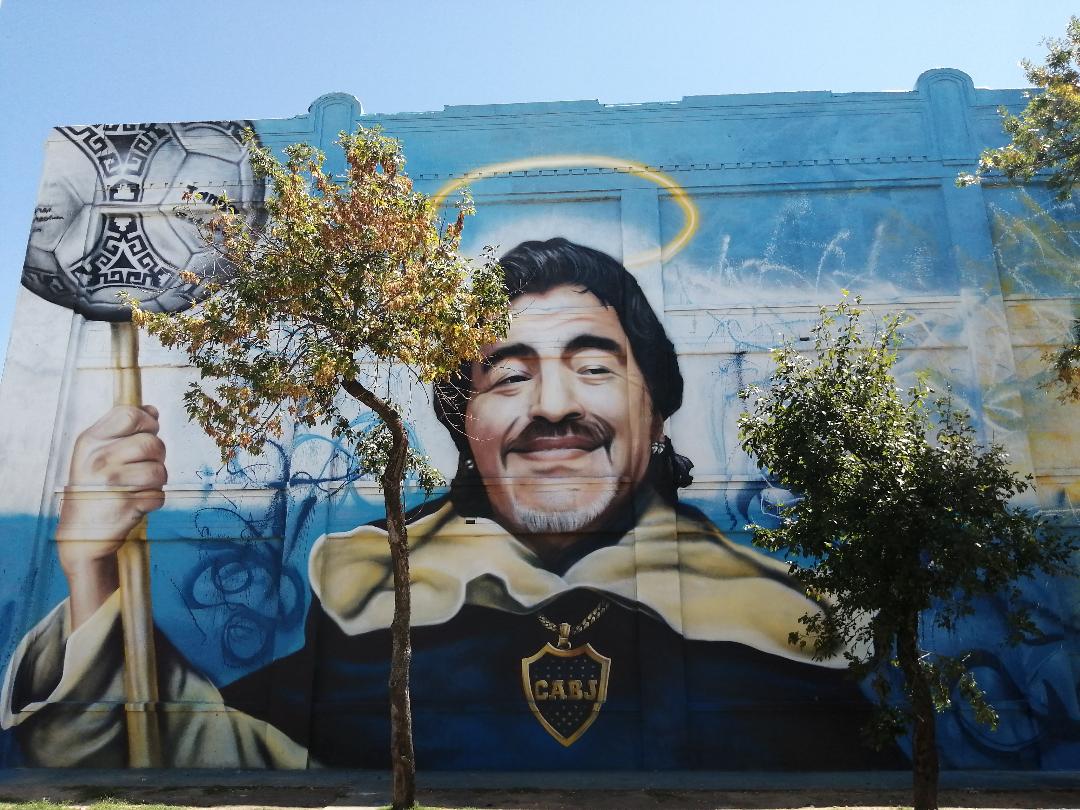