For newly promoted Premier League sides, the nerves must be jangling ahead of their first season back in the big time. But whatever happens over the course of the campaign, they can hardly perform worse than Derby in 2007/08.

That miserable campaign will forever be remembered for the Rams mustering a Premier League record low of just 11 points. For many reasons, Darren Moore could be forgiven for wanting to forget about it, but the towering centre-back maintains he loved every minute.

Moore amassed 31 appearances that season, but cruelly missed Derby’s one victory at home to Newcastle in September. Despite that, the defender was one of few members of the team relatively unscathed by a gruelling campaign and collected the fans’ player of the season award.

Moore was already a 33-year-old veteran, having previously appeared in the Premier League for Bradford City and West Brom, but he realised early on that things were not going to go well for the Rams, owing to a divided dressing room and problems in the boardroom.

In their opening five games, Derby conceded 16 goals and collected just a solitary point on the opening day against Portsmouth, but Moore is adamant they deserved their spot among the big boys. Even though things panned out disastrously.

“We deserved to be there and I was very much looking forward to the Premier League season,” Moore tells The Set Pieces.

“The trouble with the Premier League is you have to learn really, really quickly in terms of how you play your football and the calibre you’re coming up against. You’ve got to cut out the mistakes quicker and be more ruthless with your all-round game. In the Championship, teams possess two or three dangermen, but in the Premier League there’s seven or eight.”

Issues at boardroom level were a concern as manager Billy Davies lacked support in the transfer market after coming up through the Championship play-offs. The standard of the new arrivals were not sufficient for a Premier League survival fight, with the likes of Robert Earnshaw and Claude Davis struggling to make an impact at Pride Park.

“Billy was working to get the squad together, but it was evident once he wasn’t going to get the money he was supposedly promised to spend on the team. I think that’s when things started to go a bit sour.”

A rare bright spot for the Rams was their sole victory of the campaign against Newcastle in mid-September, by which point one bookmaker had already paid out on Derby being relegated. But this didn’t prove to be the turning point in a wretched season, as a 5-0 loss to Arsenal in the next game confirmed.

Moore thought a 2-0 defeat to Chelsea in November might stimulate a reawakening, but Davies departed immediately after the match to be replaced by Paul Jewell. 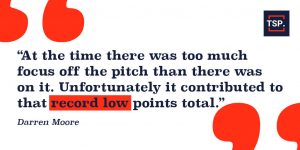 “We lost [to Chelsea] but we put in a good performance and we should have had a penalty at 1-0,” Moore recalls. “When we came into the dressing room you could feel the difference, but then Billy left which took the bottom out of it. Like any successful team, you need leadership and that just wasn’t the case at Derby.

“Obviously he [Davies] felt it was the right time for him to leave. Then Paul came into a situation where confidence was very low, the club needed direction, the squad needed to pick things up to challenge the elite standard of opposition.

“His first game was against Sunderland and we lost in the final minute of the game. The losses came week-in, week-out after that and I can imagine as a manager it was very frustrating for him. Paul found it difficult being at a big club like Derby and trying to manage it the way he would have liked to and more importantly trying to get the players in he wanted.”

The problems on the pitch were a reflection of the issues off it, as chairman Peter Gadsby resigned from his role in September after criticism over a lack of investment in the squad. Chief executive Trevor Birch quickly followed him out of the club.

“At the time there was too much focus off the pitch than there was on it. Unfortunately it contributed to that record low points total. My job was to go out there and perform to the best of my ability. People were trying but there were other problems within the club that made them take their eye off the ball.

“When there’s a structure in place, everyone in the club has to buy into it right from the top to the bottom. Whether it’s in football or another business, you need that in place and it wasn’t at Derby County. There were problems [regarding] money being available, players coming into the club, the organisation of the club and training ground dynamics.”

There was little to write home about at the end of the campaign. Kenny Miller was the club’s top scorer with four goals, including the winner against Newcastle, but few could be proud of their performances. Moore was named the fans’ player of the season, but the club’s official nomination for the award was the supporters.

“The one thing that was certain was that the supporters were excellent – they were absolutely fantastic,” Moore recalls. “That kept the season going for the players. They could have gone against us, but they stuck with the players and that’s what helped me.”

Moore found some enjoyment in the campaign, even though there were few moments to celebrate. He now works as a development coach at West Brom, and believes the lessons he learned during Derby’s record-breaking season have helped him.

“I took the positives at the time and I looked forward to every game. When you’re on a bad run, the only way you’re going to put it right is the next game. You wanted the games to come thick and fast, just like when we got promotion.

“If everyone’s on top form, you want the next game to come so you keep that consistency. When you’re at the bottom, the only way to get out of it was the next game and I always wanted the next one to come to get my chance to put the wrongs right.”

There’s no despair for Moore, who could be scarred by the memories of the Premier League’s greatest failure, but instead showed strength to come through the ordeal. It looked a nightmare from the outside, but Moore knew he was still living the dream as a top-flight footballer.

“It was a very difficult situation but it’s one I learned from, and I think everyone at the club did. There will be players who never got to play in the Premier League in their entire careers, whereas we did. We sampled it, we enjoyed it, we competed in it.

“They were difficult times but they are ones I look back on fondly, as I was playing in the Premier League. As with any player all you want to do is play against the best players and that’s what we were faced with.”

This article was originally published on 9 August 2017.