Big careers crystallise in big moments, like index cards in the roller deck of nostalgia.

David Beckham’s right foot is forever angled at the Greek top corner, or bear-trapping the calf of Diego Simeone. Ronaldo skittles Compostela defenders like pins before wandering impotently around a World Cup final. Zinedine Zidane reclines into a Hampden volley like an old armchair and erupts head first into the chest of Marco Materazzi. Wayne Rooney crucifies himself in derby-day celebration and chastises England fans down a camera lense.

For Denilson those memorable on-pitch moments remained elusive. The one-time world’s most expensive player couldn’t escape the airport, duping stooges during his delay in the departure lounge. That was the set of Nike’s 1998 World Cup advert, a masterful piece of PR that hitched the American brand to the return of beautiful Brazil.

It portrayed the holders breaking pre-flight boredom with an impromptu kickabout in the terminal. As Ronaldo, Romario and Roberto Carlos romped past security, jumping over conveyor belts and bag scanners, it promised the functional football of 1994 was dead. Brazil would depend on riffs of riotous brilliance to defend their title in France.

Denilson, flicking the ball through a luggage trolley and slaloming past passengers on a moving walkway, wasn’t the most famous face among the cast – but he was the costliest.

He had come to France a year before as a relatively unknown 19-year-old to play in the Le Tournoi – a four-way warm-up before the main event in which Roberto Carlos scored that free-kick. By the time Denilson boarded a plane back to São Paulo, a bidding war was under way for the next big thing.

Europe’s superpowers, wowed by the winger’s elastic limbs, flashing stepovers and velcro control, had done the maths. In 1994 the biggest clubs waited and watched with intrigue while PSV Eindhoven took a chance on a young Ronaldo. In 1995 Middlesbrough had struck out ahead to sign Juninho. Now it was was time to cut out the middlemen. 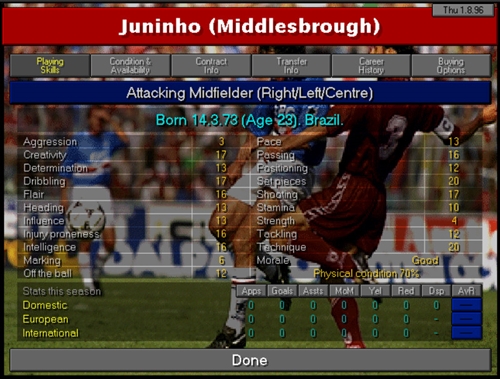 Lazio, Real Madrid and Manchester United were all linked with Denilson, but Barcelona appeared to have won the race in 1998 after agreeing a fee with São Paulo and terms with the player. Then the deal stalled over a tax issue.

That narrow window of opportunity, as Barca wrangled over the small print, triggered Manuel Ruiz de Lopera into action. The Real Betis president, an unholy mix of religion, extraordinary ambition and fiery temper, reportedly made his offer after an hour on his knees at Los Salesianos de la Trinidad church in Seville.

Weighing on the property tycoon’s mind was the bonus-laden ten-year contract worth a basic £2 million a year and the world-record £21 million transfer fee to sign Denilson from São Paulo. It was a Hail Mary move, a huge leap of faith.

Ronaldo, Denilson’s predecessor as the most expensive player in the world, had cost Internazionale £19.5m despite being the youngest-ever World Player of the Year. He had scored 47 goals in 49 games for Barcelona.

Ronaldo’s fee surpassed the £15m Newcastle paid for Alan Shearer after he finished top scorer at Euro 1996. Shearer had just plundered 31 goals from 35 Premier League games in a declining Blackburn side.

By contrast, Denilson barely had 50 appearances to his name for São Paulo, just a smattering of goals and the flimsiest proof that his undoubted talent would survive the transition to Europe. Even for the man in the centre of it, the numbers seemed distorted.

Lopera hoped the move would disrupt Spain’s old order. It was time to challenge Barcelona and Real Madrid for trophies.

Following Lopera’s heist and that famous Nike advert, Denilson had an underwhelming World Cup. Injury had ruled a weeping Romario out of the squad, but coach Mario Zagallo preferred to bring 34-year-old Bebeto into his line-up ahead of the young prodigy. Denilson’s only start came in the 2-1 defeat by Norway in a group-stage dead rubber.

But it did little to dampen the fervour in Andalusia. Twenty-thousand fans turned out to Denilson’s unveiling after the tournament, cheering when their new signing playfully named himself as the player to take the forthcoming La Liga season by storm.

Newly-promoted Alaves seemed ideal fodder for the season opener, but Denilson couldn’t unpick their doughty defence in his first start as the match ended goalless. The fans made excuses – it would take time to settle in, recover from a traumatic World Cup final defeat, get used to to the Spanish league – and so on. And then they waited.

Summer turned to winter and still the cathartic first goal would not arrive. In early December, Denilson spoke to puzzled reporters. “I’m trying hard to prove I’m the best in the world, but I’m only the most expensive,” he said. “I am more desperate than ever to score; it will improve things in my own mind.”

The next day, in his 18th game for the club, Betis were awarded a penalty against Atletico Madrid. Denilson grabbed the ball, determined to shake the monkey off his back. He connected cleanly, but goalkeeper Jose Molina guessed right, pushing the ball onto the post and clear.

Only on February 14th, Valentine’s Day, did Denilson finally consummate his move, scoring in a 1-1 draw with Racing Santander. It was never a relationship that was going to work out. The fee was too big and the club too small.

Betis had finished eighth in the season before Denilson’s arrival. The team was mostly solid Spanish professionals, with Finidi George – signed from Ajax for £6m – the only real point of interest. Grafted onto this workaday XI at vast expense, the much-hyped but little-seen Denilson was a footballing circus act.

As well as the weight of expectation at Betis, he had to contend with rubber-necking rivals and media intrigue at how a supposed superstar could shine at a relative backwater. At Barcelona, as with Brazil, he would have been part of a chorus line of stellar names sharing the pressure. At Betis, he was alone under the spotlight.

He rarely ventured the walls of his £600,000 villa on the outskirts of Seville, killing time between matches by playing video games and table football with an entourage of family and friends. At the training ground, his integration was hampered by a carousel of managerial appointments. Antonio Oliveira, poached from Porto in the same summer Denilson arrived, left without overseeing a single game after a disagreement with Lopera.

Vicente Cantatore lasted only until October before Lopera pulled the ejector lever with Betis bottom of the table. The stern, defensive specialist Javier Clemente came in and dragged Betis to an 11th place finish. He had little time or sympathy for Denilson’s struggles, but worse was to come.

The emergence of teenage winger Joaquín coincided with a strong start to the following campaign. But Betis’ form soon collapsed, and they won only twice between the start of January and the end of April. As they plummeted down the table, Denilson became the show-pony piñata for fans to take out their frustrations.

Betis’s stadium, recently rechristened in his own honour by Lopera, had another name added to it as angry fans spray-painted the stands with curses aimed at Denilson. Contrary to the advice of manager Faruk Hadzibegic, Denilson returned fire, telling El Pais that the Betis fans were “not really any good” and were betraying their history of supporting the team through thick and thin.

A sorry season reached its nadir with Lopera protesting in vain that city rivals Sevilla – who had already been relegated – had deliberately lost to Real Oviedo to drag their neighbours down with them.

As Betis prepared for life in the second tier, Denilson was sent back to Brazil as part of a cost-cutting and form-finding mission. He spent the first half of the season on loan at Flamengo, and the change of scenery initially seemed to work. Returning in January 2001 with his mojo partly rediscovered, the winger helped Betis return to the top flight at the first attempt.

Redemption was to prove short-lived. The pace of the modern game in Spain rendered Denilson a sepia-era superstar cut adrift by La Liga’s full-throttle. While compatriot Ronaldo was a hurtling bulk of poise and purpose, Denilson was a throwback to a bygone era. Like 1950s dribble-wizard Garrincha, he could split a defender from his own shadow with pantomime feints and shimmies. But unlike when Garrincha played, the game wouldn’t stop to allow him to repeat the trick.

He was hustled, harried, hacked and ultimately silenced. The way he played conveyed, a little unfairly, the image of a man in thrall of cheap thrills to the detriment of the team. But Denilson did not go out of his way to dispel that tag. Under Juande Ramos – Betis’s eighth manager in three years and a personality to poop any party – Denilson was reprimanded as one of a group of players caught partying until 4am on Halloween in the club’s first season back in La Liga.

On another occasion he was caught on camera remonstrating with unhappy fans who were jostling his car, yelling “touch me and I’ll see you in court”. If he arrived at Betis as a coup, Denilson left as a farce.

Betis’s final match of the 2004/05 season was the Copa del Rey final against Osasuna. As is customary, the starting line-up collected for a pre-match snap. What isn’t customary is for the substitutes to join them. But there was Denilson, crouching on the far right of the front row, making the first XI into a XII. He was frozen in time as the expensive appendage to a team in which he was supposed to be the beating heart, sitting out his side’s 2-1 victory and failing to add to a scant 12 appearances for the season.

After 186 league games, 13 goals and seven years, he departed that summer to Bordeaux. In his wake, he left a tangled paper trail. As Betis picked up the pieces of Lopera’s reign, with the former president accused of tax evasion and taking money out of the club, Denilson toured the world to wring the last drops of out of his career and celebrity status.

After a season at Bordeaux came a short stint at Saudi Arabian side Al Nasr. He played under former Arsenal defender Steve Morrow at FC Dallas, but was overlooked by Gary Megson following a trial at Bolton. It was never more than a few months before his next move.

Denilson’s final game came in June 2009, not amid guards of honour and fanfares, but instead for Vietnamese side Hai Phong Cement. Having signed a three-month contract worth a reported £10,000-a-week, he delayed his debut owing to complications with a serious, pre-existing knee injury. The local fans burned seats in the stands in protest.

Eventually, loaded up with painkillers, Denilson appeared on the pitch, scoring a free-kick in a 3-1 win over Hoang Anh Gia Lai. Three days later he asked to be released from his contract and left the country.

More than a decade on from becoming the world’s most expensive player, Denilson found himself back in the departure lounge. The supply of fall guys had run dry, there would be no ball juggling over the baggage carousel this time. His was a career that never took off.