Dan Ferretti is one of the key figures in the UK Footgolf scene. We spoke to him about his love for the sport and what the future might hold as it increases in popularity. 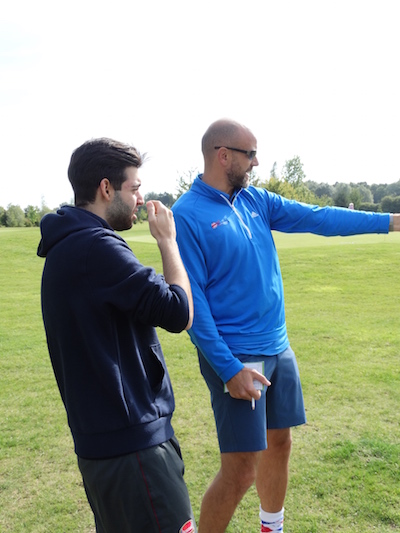 Dan, where did Footgolf come from?

Well, the origins are a little hazy. As far as I’m aware, the first tournament was in the Netherlands in 2008. Then it was played by semi professional Dutch and Belgian footballers and they said that Willem Korsten and his Spurs teammates had a game, where they would try to get the ball from the training pitch through the changing room door in the fewest number of kicks. I spoke to Ruel Fox not so long ago and he confirmed the story. So that’s where we think it started. In the UK, a chap called Mike O’Connor, who now runs the UK Footgolf Association, played it in the States and he brought it over here and organised the first competition in 2012. It had a good reception so Mike and a few others started the UK Footgolf Association and started talking to a few more courses who were keen on the idea. I personally got involved early last year after hearing about it on Talksport.  I got in touch with the organisers and now I work on the development of the sport.

How big is the sport now?

When I started, there probably would’ve been about 30-35 courses countrywide and now we’re looking at 160. So in the space of 18 months, it’s grown that much. There is a thriving UK tour, with regular UK players, and also a European tour. There’s been competitions in Spain, Slovakia, Norway, France – all over the place. I’m personally going to Hungary this weekend to Budapest to play in the Hungarian Open. It was Croatia last weekend (which, incidentally was won by our best British player, Ben Clarke), we had our own UK Open last month, which hosted about 140 players from 12 different countries who came down to have a game. While it’s very popular in Europe, we’ve got more courses here than the rest of Europe put together. But by far and away, it’s the States who are running away with it. They’ve got 450-500 courses or something like that. But there’s more and more ex-footballers getting involved, I mean Paulo Di Canio and Dino Baggio are playing it in Italy, over here, guys from the 1980s like John Walker and Russell Osman have played it, I’ve had a round with Razor Ruddock, Mauro Zarate, different players like that. It’s certainly bubbling up quite nicely.

It grabs you and you don’t want to stop playing. Nobody has actually said that they just don’t like it. There’s two extremes. I mean I’m 41 now, and I’ve played football since I was a boy with barely a break. I packed it up a couple of years ago, I had a few issues with my back, and I’ve got two young kids as well now so it made it more difficult. But it doesn’t stop you wanting to kick a football when you see one! When I take my son to play football for his team, if ever the ball comes off the touchline, I’m the first one there to kick the ball back. So having a hole to kick it into, and having that competitive aspect as well, playing with your pals, you know, it ticks all the boxes for me. There’s enough ‘football’ there, but there’s also the fact that I’m not going to get smashed in the back by a centre half.

There’s been talk of conflicts with the actual golfers. Could this prevent the sport from growing? Or could it have the opposite impact and stop golf from growing? Will there be a conflict of interest between the two?

There’s always the possibility of problems. As things stand now though, people like myself are responsible for certain areas at clubs and we speak to golf course managers to get a better idea of what their members are saying. I’d say that 80% of the members are fine, but the 20% that aren’t fine are very insistent about telling you that they’re not fine. I don’t think it’ll stop the rise of footgolf because it’s got so much momentum behind it at the moment. In terms of golf, from the very little I know about golf, there are problems there in terms of numbers already. There aren’t as many young golfers coming through because it’s quite an expensive sport to get into and the older golfers are getting to a stage where they can’t do it all the time. So, the numbers are dropping. But I certainly don’t think this difference between the two will harm footgolf at all. 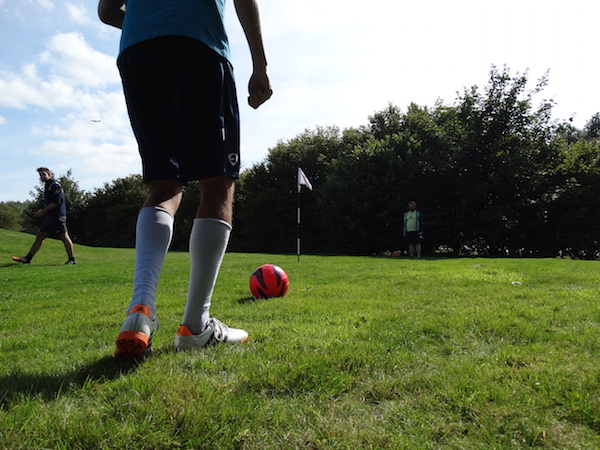 Finally, how do you see the game really taking off from here? How does the game take that next level?

Well certainly on a short term basis, the names playing the game will help. I mean, we had Aaron Ramsey and Per Mertesacker down at a course in Barnet recently, to open that up. We are definitely making more of an effort to get the game into schools. There are a few in Derbyshire who already have footgolf courses on their premises, and they’ve had interschool competitions, and we’re encouraging that because the younger kids that are playing it now will be the ones that are playing it in five, ten, fifteen years. I think ultimately, it comes down to sponsorship. We need the bigger firms to be throwing some money in, so we can offer more prize money, get it onto better courses. Like everything, it does come down to money and if you can get a bigger firm to let loose a few quid on the sport because they can see the potential in it, that’s the way to go. Some companies have been aware of footgolf and its potential for a few years now. Mitre actually approached us two years ago, and said ‘look, we can see how big this is going to be, we want to supply your footballs before anybody else comes up’. Thankfully they did, because we go through around 18,000 footballs a year! If  you can imagine, a lot of these courses will have thorn bushes around the sides, or they get lost out of bounds. Mitre certainly have their work cut out but they’ve been with us from the start. We need more, larger, recognised companies to come and put their name to it all, and that’s ultimately how the sport is going to grow.

Our review on Footgolf can be found here.

If you want to learn more about footgolf, or if you’re thinking about getting involved yourself, some links can be found below:

And if you’re feeling dangerous, you can watch a video of the UK Open event in Cambridge, here.