God bless Wikipedia. Whether you’re visiting for some last-ditch fact-checking or simply to indulge in curious football niches being granted thousands of words by god knows who* (although FourFourTwo recently caught up with the “Wiki Geeks”, as they call them) it’s fascinating to see an often emotive sport being reduced to such matter-of-fact terms. Let’s go deep into the rabbit hole of football on Wikipedia…

This is the final resting place of Peter Ridsdale’s Leeds United (1997-2003). Its gravestone: a sombre grey Microsoft Excel line graph of Leeds’ precise league position every year until 2010 when it just gives up, having plotted a trajectory almost identical to the value of the post-referendum pound.

It’s a miserable read – you can almost hear an ominous Channel-Five-documentary synth playing in the background while you do so – and it’s not until halfway down that the coffin is well and truly nailed with the most dispassionate hammer imaginable:

The term “doing a Leeds” or to “do a Leeds” has since become synonymous with financial mismanagement of a football club with potential dire consequences.

There’s no room for tittle-tattle – be it Seth Johnson’s semi-legendary salary negotiations, the £240 goldfish or the £600,000-a-year fleet of company cars – just the cold, hard facts of Leeds’ plight of administration, relegation and humiliation.

From then on, inverted commas poke at the hundred-million-pound wound, wrapped around phrases like “living the dream” and the title itself, which appears no fewer than 29 times throughout, after which any football club chairman doing some bedtime reading is left in no doubt that their club absolutely should not “do a Leeds”.

(*One possible theory is that David O’Leary or Peter Reid are responsible for the page’s upkeep, as part of their severance agreements.) 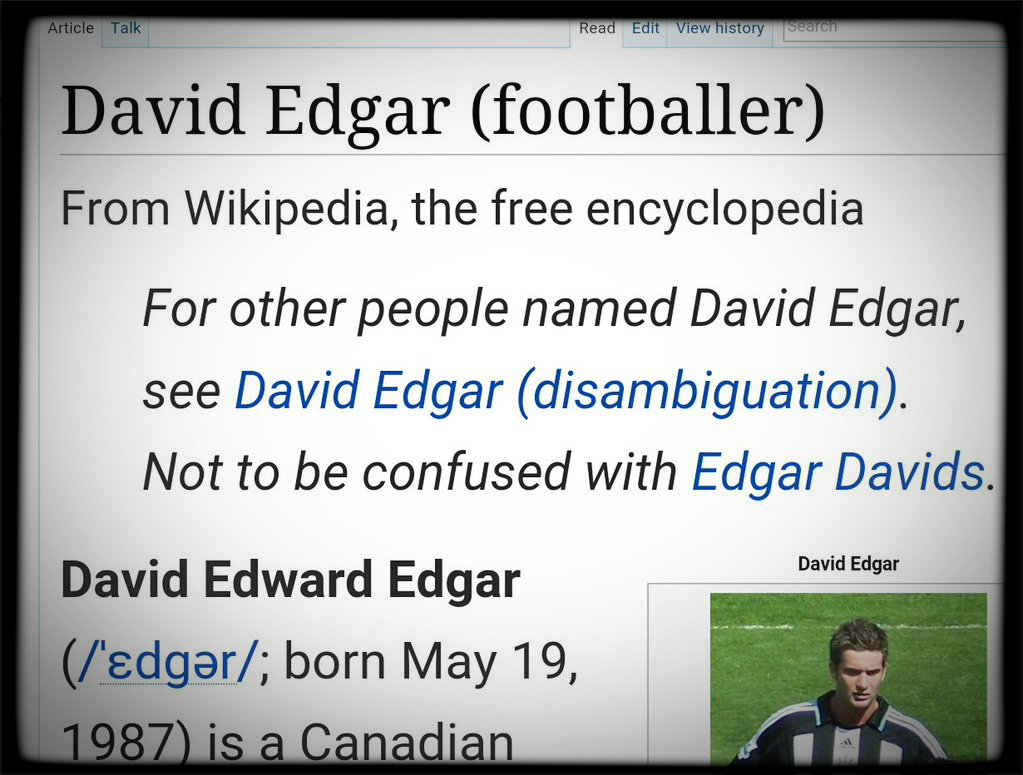 A classic of this sub-genre. Please do not confuse David Edgar with ex-Barnet enforcer Edgar Davids.

“This article is a mess,” one user notes behind the scenes.

This attempt to chart every poor young playmaker lumbered with the unhelpful tag of “the new Maradona” quite sensibly, though, begins with 700 words on “the current Lionel Messi”, Lionel Messi.

After that come the motley crue of comparative also-rans, tragically brought together under the sub-section list of players once thought to have been the “New Maradona”: conjuring up the image of an Argentine football journalist arriving back at the office to have to break the news to his subs that, no, Diego Latorre was not the second coming after all.

Yes, that was 6ft 4in Wigan legend Franco Di Santo, whose own Wikipedia page refers to him as “Little Crespo” and who shares about as much footballing DNA with Maradona as Iain Dowie. Anyway, on the list goes – Andres D’Alessandro, Javier Saviola, Carlos Tevez – before running out of steam somewhere around Carlos Marinelli, the lithe teenager signed by Middlesbrough in 1999 and whose subsequent career highlight appears to be being linked with a move to Exeter City. 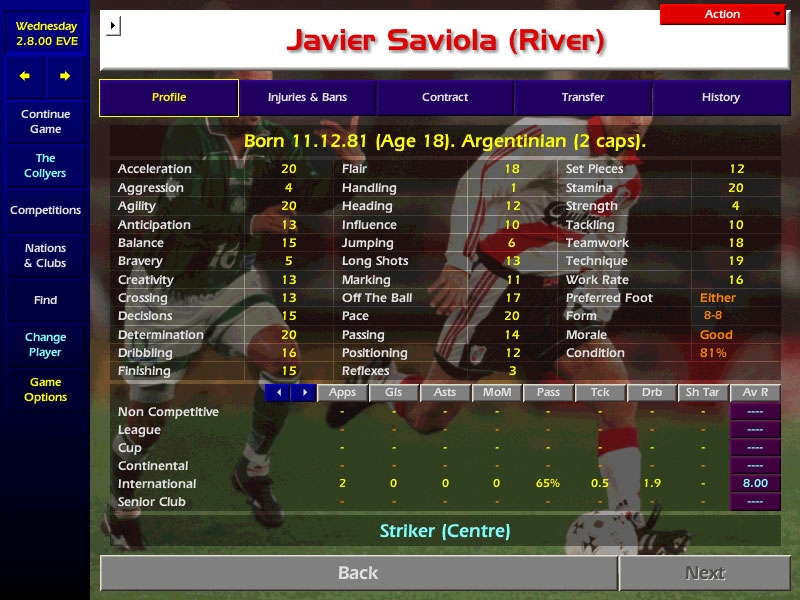 The beauty of the internet, as Twitter proves daily, is that there will always be someone willing and available to commit 996 words to debating the very definition of a Group of Death.

After the usual early formalities, this page really gets stuck in about halfway down, chewing up any technicalities and anomalies before spitting them out all over the world wide web. The USA ‘94 group of Italy, Ireland, Mexico and Norway is supported by a gloriously excessive 14 citations. It briefly wrestles with the quandary over whether a Group of Death should be identified in advance or in retrospect, before finally agreeing that every fan thinks their team has been hard done by in a tournament draw.

This rather tense Wikipedia entry signs off with a lighter touch as it trawls through the self-aware bunch of related terms – “Group of Life”, “Group of Sleep” and the snappy “Group of So Few Worries We Spent All Day Yesterday Following the Metatarsal Melodrama Rather Than Worry About Trinidad and Tobago”.

Wade into the debate at your considerable peril.

The mid-1990s’ significant confluence of football and popular culture, peaking with Euro ‘96 and all that, certainly deserves a good write-up. What better snapshot to choose than the Liverpool squad of that year – Redknapp, James, McManaman, Fowler, McAteer et al – nicknamed the “Spice Boys”?

That name ran far deeper than just a glance at the singles charts, too – Robbie Fowler was rumoured to be dating Emma Bunton, Mel C was a Liverpool fan and the Spice Girls’ mastermind Simon Fuller was McManaman’s agent.

20 years later, with the memories consigned to YouTube and faded copies of Match! magazine, the socio-cultural mini-phenomenon of the Spice Boys was ready to be immortalised on Wikipedia, in no fewer than 8,517 words. An veritable dissertation on a team fuelled almost entirely by the banter of Neil “Razor” Ruddock.

5) English Footballers Who Have Been “Merk’d”

Not just the best Wikipedia sub-section of all time (belonging as it does to the main page for the seminal 2006 TV programme Rio’s World Cup Wind-Ups) but a strong contender for the finest collection of consecutive words in the English language. 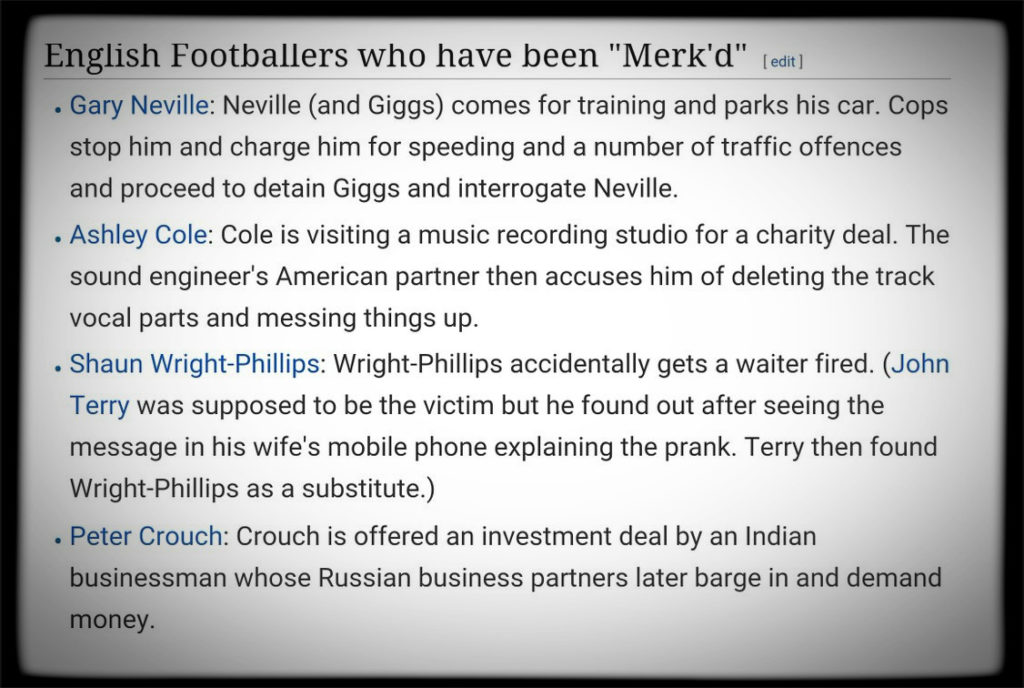 Wikipedia’s objectivity frequently, unavoidably, strays into the territory of sounding a bit like your mum when she calls a PlayStation a “gamebox”. Here, that only adds to the delight, as the straight-faced descriptions of the victims of Rio Ferdinand’s hidden camera show arguably turn out to be better than the pranks themselves.

The superbly condensed synopsis of “Rooney is visiting a dogs’ home with his wife Coleen when a little boy’s dog dies” sounds like something straight out of the Radio Times archive of old Holby City episodes.

The final flourish is the sub-section of “Accomplices”, which includes “John Terry (gets Shaun Wright-Phillips involved)”, which sounds like a rather clear-cut case of abuse of power right there.

A 36-year management career warrants a substantial Wikipedia page in its own right but football’s most famous chiropodist Neil Warnock’s biography really only comes into its own with a suitably encyclopaedic rundown of everybody he has ever fallen out with.

2,158 words are needed for the seven players, ten managers, six referees, four clubs, four chairmen and one Sean Bean who have either incurred the wrath of Warnock or have had their own wrath incurred in the opposite direction. Comfortingly, there is space to mention “the nickname ‘Colin’, stemming from the fact that ‘Neil Warnock’ can be anagrammed into the name ‘Colin Wanker’,” a delightfully deadpan reference that delivers a final blow of “…this has been picked up by fans of other clubs as well.”

Once that index of acrimony is finally complete, there’s a chance to unwind with a brief tour of Neil Warnock#Personal Life, for which some citations are sorely needed.

This is firmly filed under Things You Didn’t Think Needed a Wikipedia Page, let alone one that stretches, inexplicably, to 16,780 words. There is no dumbing-down to be found here.

First off, there’s a 268-word intro to meticulously explain that a last-minute goal is 1) a goal, which 2) occurs in the final minute or in added-on time (which should not be confused with extra time, idiots), which 3) is really only interesting if it’s an equaliser or a winner and which 4) is not the final penalty in a shootout, because that doesn’t count. My god.

The last-minute goals is right up there with the concepts of games in hand or yo-yo clubs* in the over-explanation stakes. What, you still can’t quite grasp the concept of a goal scored in the last minute? Here, have ONE-HUNDRED AND SEVENTY-ONE “notable” examples to read, starting – excellently – with Nayim’s 40-yard boomer over David Seaman’s head in 1995, taking in Jimmy Glass and “Agueroooooooooooooooo!”, before your laptop’s scroll function finally waves the white flag.

(*In Poland, they’re called wanka-wstanka, for which I am eternally grateful to Wikipedia for informing me.)

You know those aeroplane graveyards in the Arizona desert that occasionally pop up on the internet to gawp at? No? Hello? Anyway, this is very much the football equivalent.

The history of US domestic soccer is punctuated by the termination of ill-conceived experiments like the star-studded NASL and its 35-yard shootouts, its frankly absurd indoor cousin the Major Indoor Soccer League, and various other aborted ventures based around various combinations of the words “American”, “soccer” and “league”.

All those obsolete competitions, all those abandoned hopes and dreams, have left behind dozens of defunct football teams. Ostensibly, that shouldn’t be hugely fascinating, until you bear in mind what North Americans tend to call their sports teams.

Many took the name of their primary sponsors, leading to tricky trips to face Burke’s Undertakers, Hellrung & Grimm or Atlanta Datagraphic. Some threw dignity to the wind in the name of sporting ambition, resulting in the Carolina Lightnin’ (led by Rodney Marsh to the “American Soccer League” title in 1981), the San Antonio XLR8 (4th in the Lone Star Soccer Alliance South, 1992) or the New Jersey Lady Stallions, the first US club of England’s record goalscorer Kelly Smith. 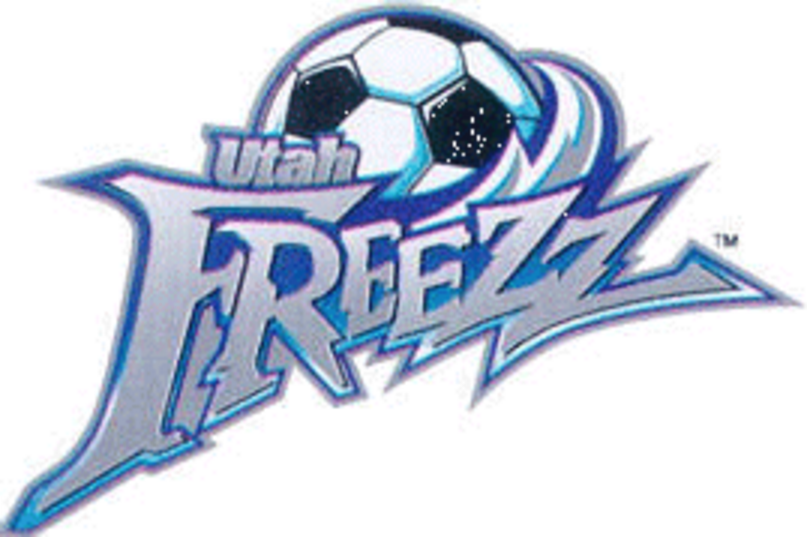 Others look like the result of a late-night drinking session, including the Ohio Xoggz, the Buffallo FFillies (“two F’s were introduced to ward off accusations of sexism”) or the Utah Freezz. Please, have a browse, see if there’s anything you like.

I really could go on, but a final honourable mention to the Myrtle Beach Seadawgs (USISL Division 3, South Atlantic region). In 1997, they signed English golfer Laura Davies in a publicity stunt, giving her a six-minute debut cameo in which she failed to score past future Manchester United and Everton goalkeeper Tim Howard despite a $500 bonus on offer to anyone who could lay on an assist.

“There is no convention for the number of transfers required for a player to be considered a journeyman. Journeymen are distinguished from players who play for the same club, or only a few different clubs, throughout their entire careers.”

What else is Wikipedia for other than to scroll through the seemingly neverending careers of humble strikers? For every one-club man, every Jamie Carragher, there is a Trevor Benjamin. For every Lionel Messi, there is a no.9 still trying to reach a century of goals, despite his Wikipedia career summary being peppered with question marks from when he wandered to a league too obscure for anybody to keep count.

In pure data terms, the eminently scrollable Bertie Brayley appears to have the most meandering football existence of all. Having been a 1999 Youth Cup-winning teammate of Joe Cole and Michael Carrick, Brayley has since moved club 39 times – finding time to reach the World Cup quarter-finals with the England Learning Disabilities team in 2006 – and now bangs in the odd goal for Dorking Wanderers in the Isthmian League Division One (South).

Being a journeyman isn’t all about the sheer numbers, though. While Brayley continues his bid to represent every semi-professional club in the south-east of England, other strikers have taken a more leisurely, scenic route. Take former Aston Villa striker Stefan Moore, whose apparent fall from grace (including the unclickable “Silhill 4th XI”) was perhaps simply a search to find his true level.

Patrick Suffo, meanwhile, went from Barcelona B to Bedworth Liberal Working Mens Club in the space of fifteen years – squeezing in a World Cup red card somewhere along the way – and who must surely be among the top three Cameroonian strikers to have played for City and United. The Coventry versions, that is. 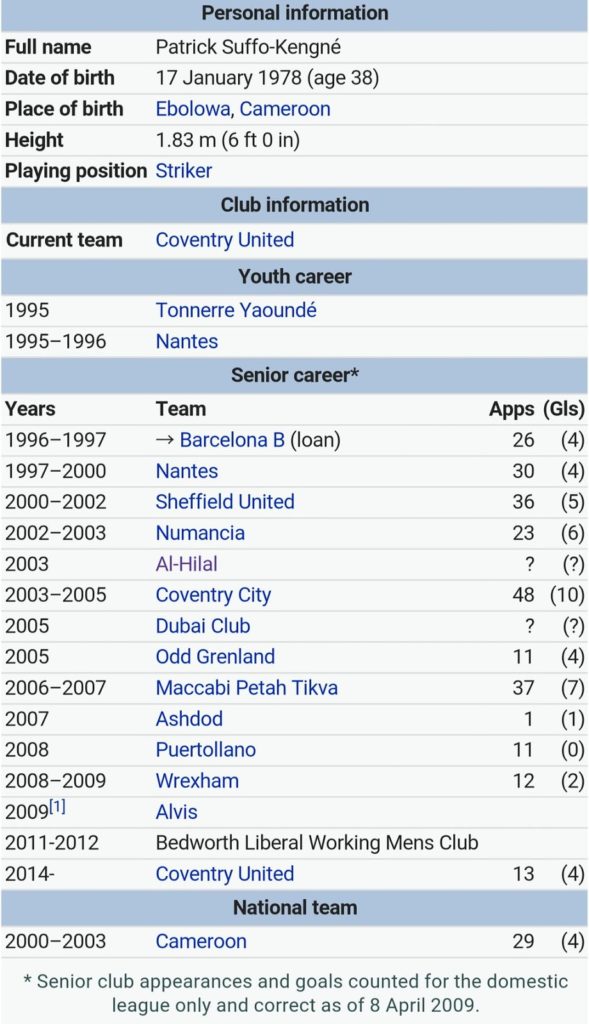 Anyone can keep track of Cristiano Ronaldo’s goal tally, but it’s testament to Wikipedia’s commitment to completism that your Brayleys and your Benjamins are equally catered for.